The 1977 will be unforgettable for New Yorkers: besides the victory of the Yankees over the Dodgers, in that year New York saw one of the most incredible and crazy moment of its history, with epidemic social tensions that would have been impossible to ignore

It’s the fall of 1977, at the end of the third inning of game two of the World Series, when all of a sudden the control room switches from the helicopter shooting above the spot lit Yankee Stadium to the bordering neighborhood: the flames of a big fire rend the surrounding darkness. The ABC anchor impassively announces: “Ladies and gentlemen, the Bronx is burning”.

In fact, that October night, while the New York franchise was being carried by Reggie Jackson to an unexpected title, the whole city was living one of the most incredible and crazy moments of its history. Actually this fire – a few steps from the crowd, excited for their team’s victory – could be seen as an emblematic snapshot able to capture the collective imagination of that incredible period. In the same year that America cried for Elvis’ death, on the banks of the Hudson the amount of events that was witnessed was insane even for New York, which during these weeks was swinging between happiness and drama. Of course, the place that was representing these contradictions the best couldn’t be any other places but – again- the Bronx. 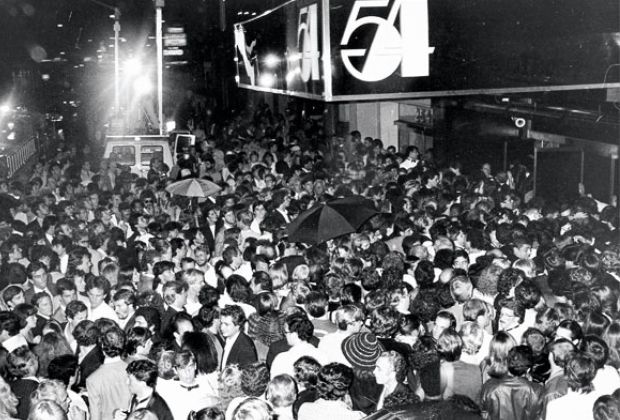 The line in front of Studio 54

In 1977, the Big Apple was an unrecognizable metropolis compared to the one we know today, as if the forty years separating us from it feel like centuries. Whereas the brand new Twin Towers redesigned the lower Manhattan skyline, north of them the Time Square area was still not safe. Pornography and prostitution, along with their related crowds of consumers, were reigning supreme. That same year the most popular night club of the city (maybe of the planet) opened around that area. A night club that became the epicenter of the global Disco Music phenomenon as well as the every-night scene of the most excessive transgressions that the city has ever known: Studio 54. The club attracted crowds of young people every day, but also celebrities like Mick Jagger with his wife Bianca, well known around there, Andy Warhol, Truman Capote and occasionally even Salvador Dalì.

More south, along Bowery, every night bands of the caliber of the Ramones, Blondie, Talking Heads were playing at a completely different, but as legendary as Studio 54, venue that used as name the acronym of CBGB. Up until now only good news. On the other hand, as many sociologists pointed out, that  uncommon transgression desire was nourished by the delicate historical moment that the Country was going through. The Vietnam war had tragically ended a couple of years before; America was learning how to deal with the deep wounds left in the Veterans’ minds and souls by the ten-year conflict period and finally only in 1974 the Watergate brought President Nixon to resign, undermining the credibility of the Country in which people appeared to, for the first time, stop trusting. Up there in the Bronx, though, this feeling was mutual: authorities decided as well to throw in the towel and leave the population to their fate. The decision was deliberately taken and ended up getting out of hand. It didn’t take long for the rage in the neighborhood to break out : not only through Hip Hop sounds – which was born among its blocks as previously told in our issue -, but especially through an uncontrolled spiral of violence. The squalor was shocking, crime was inevitable and the owners of buildings accepted the fact of not receiveing any rents and started to set entire buildings on fire in order to get at least insurance compensation for damages. Flames became a familiar characteristic of the urban landscape.

In some parts this phenomenon reached biblical dimensions, for example, in 1980 there were only nine standing buildings left in Soundview. Ten years before there were 836. Charlotte Street suffered the same fate: only 3% of the buildings survived. 120,000 fires were reported in only one year, which would correspond to an average of thirty fires every two hours.

In this precise moment the city Housing Commissioner, a relatively unknown character at the time, came into prominence, attracting in a short time the local media attention. Roger Starr, this was his name, gave some interviews where he laconically explained the strategy that would have been adopted to solve the situation: abandon. According to Starr, the white flag should have been risen, ignoring what happened and instead  focusing the effort on the other more-healable parts of the city. The action of Planned Shrinkage, as it was defined, followed precise studies carried out during those years by the RAND Corporation, an important research company employed by the government. These studies envisaged the progressive abolition of services such as police force, fire fighters, healthcare even the supply of electric power in order to lead in a small amount of time to the depopulation of the most depressed areas.

In short, the action plan was even too clear: cutting off a leg to keep the canker from killing the whole city. And yet, 1977 showed that for how far Uptown was, what was happening couldn’t light-heartedly be ignored from the rest of the city with a shrug. The young folk from the Bronx were invading the rest of the city with sassy graffiti on the sides of subway trains that were crossing it, from 189th Street to the southern tip of Manhattan as to yell to the world that was ignoring their existence.

Until the day in which authorities couldn’t ignore all of this anymore: that day was July 13th 1977. Around 9.30 pm of that scorching night, the city power grid failed causing the most disastrous blackout in the history of New York. New York plunged into terror when darkness fell onto its five boroughs. Blackout meant impunity for each crime, and consequently all the rage accumulated throughout all those years of decadence broke out that night. The stores of the entire city, not only in the Bronx, were looted of any kind of goods: electrical appliances, jewels, clothes, and furniture became booty during that night. Graffiti on a subway train

That was the point of no return. That night, between shock and terror, the city realized that a turnabout was necessary. Only four months later the outgoing mayor Al Beame was roundly defeated in the elections and the democrat Ed Koch took his place with 55% of New Yorkers’ votes. Koch would be in office for the following eleven years, during which he’d start the recovery process of the city. Roger Starr, the resolute officer proposing to abandon the Bronx, was forced to resign by Koch, who soon enough, progressively and less explicitly,   started to carry out   a contradictory plan not far from the one supported by Starr himself. The plan brought the desired results: in 1970 the population counted more than  320,000 inhabitants, halved by 1980. The land price collapsed and the favorable conditions for a considerable investment by the government were created: in the following years it would actively take part in the plan by purchasing lands and by entrusting their management.

As a matter of fact the city of New York and its administration didn’t behave that differently from property speculators. The Bronx rebirth, something that would have been hardly imaginable a short time before, then slowly started, but at what price? According to a lot of people, the price to pay was really high. Some denigrators even blamed the progressive elimination of basic services per neighborhood – specifically healthcare- for the uncontrolled spreading of the Aids virus, which dramatically burst out right in that period (the end of 70s). Gentrification, the urban phenomenon that would fill newspapers columns with invective and analysis for the following thirty years, largely established itself right in this occasion. But still, throughout the following years the successful reconstruction plan would ceaselessly continue, progressively affecting the rest of the city. For example the famous “broken windows theory”, according to which the subway renewal could only be achieved through the decorum restoration, was going in the same direction.

Today New York is a city that can barely be recognized if compared to that New York. A safe, clean and efficient metropolis. The Bronx won back its credibility and inhabitants, while it is still trying with difficulty to shake off the stereotype of violence that it gained back then. Social tension and problems are nowadays more and more occasional, and not widespread. Nevertheless, 1977 will remain an indelible moment in everybody’s memory, not only for the legendary win of the Yankees over the Dodgers.