Musical prodigy Francesco Cafiso took up the saxophone when he was nine years old. With his recent work, he has infused his jazz with sicilianità. In New York Cafiso and his trio (bassist Marco Panascia and McClenty Hunter on drums) played a joyous performance that earned a rapturous ovation.

“Everybody here speaks Italian, right?” Francesco Cafiso asked at the start of his June 9 concert at the Italian Institute of Culture in Manhattan. When no one contradicted him, the 27-year-old saxophonist from Vittoria, Sicily joked that he “spoke Italian very well.” And then, whenever he addressed the audience during his thrilling, ninety-minute performance, he spoke only in English. Puckish humor aside, Cafiso’s linguistic choice made sense: he was appearing in New York, albeit in an Italian setting. More to the point, as a musician, he fluently speaks a language born in America ― post-bebop modern jazz.

But he’s not only achieved fluency in his chosen idiom; he has thoroughly mastered it. And with his recent work, he has infused his jazz with sicilianità, composing pieces like La Banda and La Festa, both of which he and his trio played at the IIC.  Quite simply, he’s the best thing to happen to Italian jazz since trumpeter Enrico Rava emerged in the ’60s, as a member of Gato Barbieri’s band.

Introducing Cafiso, Enzo Capua, the tireless jazz promoter and advocate, remarked that when he first heard the young alto saxophonist, “I couldn’t believe my ears. I said three words – W-T-F! He played his ass off, it really was incredible.”

Wynton Marsalis had a similar reaction to Capua’s when he first heard Cafiso, in 2003. Marsalis, the jazz eminence whose ensembles boast top-flight musicians, asked the then-fourteen-year-old Cafiso to tour Europe with him and his band.

When Cafiso was seventeen, the notoriously prickly critic Stanley Crouch hailed him as a “wunderkind” who “can play with much more authority than many men two or three times his age.”

“I feel the myth of jazz reborn in his form because Cafiso has the ability to take command of the present and ride it like a young man ready to give direction to a wild and tireless stallion,” Crouch wrote.

In Crouch’s esthetic, genuine jazz musicians must be able to do two things well: play the blues, and swing. In his estimation, the teenage Cafiso did both, and superbly. 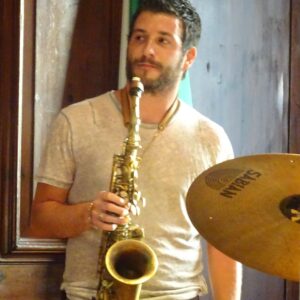 At the IIC, Cafiso amply justified Crouch’s praise (and that of many other critics), and generated an audience response much like Capua’s. Backed by an excellent trio comprising pianist Domenico Sanna, bassist Marco Panascia, and McClenty Hunter on drums, he performed a mix of standards and original compositions. He opened with I Remember You, the oft-recorded Victor Schertzinger-Johnny Mercer song. With that number, and throughout the concert, he displayed his love of melody and his assured use of it as a foundation for his fluent improvising. On his 60 Minutes of Happiness, he built his solo brilliantly, alternating short, rapid-fire phrases with long, flowing runs, blues moans and upper-register screams. Having worked up a sweat, he shed his red jacket before tearing into another original composition, A New Trip. His tone, tart and bluesy, evoked one of his major influences, Charlie Parker, and his improvising – the lifeblood of jazz ― drew gasps and cheers from the audience. “Bird” would have been proud.  (In 2005, when Cafiso was 16, he recorded A Tribute to Charlie Parker, usingarrangements from albums Parker recorded in 1950 while improvising new solos full of what Jazz Timesmagazine called “flawless elegance.”)

On the first four numbers, Cafiso and his trio adhered to a familiar jazz template: the lead soloist stating the head (main theme), followed by a sequence of solos from the other players, and then the ensemble returning to the head. The fifth number, Scenario, which Cafiso said was inspired by “beautiful scenes of Sicily,” departed from that format. Cafiso’s was the only solo voice, and “voice” is the key word, as he delivered what was essentially an aria on the alto saxophone ― pure personal expression, soulful, passionate, and altogether extraordinary. It gave this reviewer brividi(shivers) and earned a rapturous ovation.

Cafiso ended the set with La Banda and La Festa, two original, Sicilian-inspired compositions he recorded for Tris, the three-part album he released in 2015. La Banda (the title track of one of the three disks) began with drummer Hunter laying down march rhythms. Then Cafiso came in, playing a melody reminiscent of Nino Rota’s film scores. He launched an amazing extended solo full of cries and laughter, and then returned to the Rota-like melody. La Banda flowed into La Festa, a joyous mashup of tarantella rhythms and Caribbean flavor reminiscent of Sonny Rollins’ jazz calypsos.

“Joyous,” in fact, is exactly the right descriptor for Cafiso’s and the trio’s performance at the IIC. Their pleasure, even exhilaration, in playing together, was unmistakable, and infectious. They nodded and smiled appreciatively after each other’s solos, with bassist Panascia looking especially happy to be there. But no one was more energized than the leader.  Cafiso, short and slim, put heart, soul, and body into his playing; his alto sax, the perfect-sized horn for his physique, seemed an extension of his physical being, and his body language a natural expression of the enthralling sound pouring from his horn.

Francesco Cafiso took up the saxophone when he was nine years old (look up “musical prodigies“  in Wikipedia, and you’ll find him listed there); toured with Wynton Marsalis when he was 14, and recorded stunningly mature albums like Tribute to Charlie Parker while still in his teens. After releasing his 2011 album Moody’n, he experienced something of a creative crisis (he was all of 22) and took a break from recording and touring. As he said in a March 2016 interview with Jazz Times , “I told myself to look inside. I had an urge to break with my past. For three years I almost quit performing. This period gave me new eyes to see every step in music: composing, arranging, improvising.”

Cafiso made the most of that time of introspection. His virtuosity was never in question, but, too early in his career, he was beginning to look like a traditionalist, a guardian of history, rather than an innovator. Now, at only 27, he has come into his own ― as a player, composer, and arranger who not only has mastered the great American art of jazz but has found his own voice in it. You could call it jazz with a Sicilian accent. Or, just great jazz.

Francesco Cafiso’s concert was the second of three jazz events co-presented by the Italian Institute of Culture and Enzo Capua. The final event, on June 17, 2016, will feature violinist Luca Ciarla.