Leggi in italiano
Born in Vlorë, Albania, and raised in Italy, Aleksandros Memetaj brings his “Sweet home Albania” to the InScena! Festival on May 6th, 7th, 8th. His show is a universal story of immigration, that talks about its dangers and sacrifices, but also about patriotism, love and an all-Albanian determination.

“Albania Casa Mia” (“Sweet Home Albania”) is the autobiographical story of Aleksandros Memetaj, author and actor of the show. Born in Vlorë, Albania, Aleksandros emigrated to Veneto, Italy, when he was only 6 months old. He studied philosophy at the Università degli Studi di Padova and then at the Accademia di Recidazione Fondamenta, where he discovered his love for writing. Thanks to the acting company Nogu Teatro based in tome and Giampiero Rappa, the same Giampiero Rappa that would push him to write “Sweet Home Albania,” Aleksandros starts his career in the theatrical world. “Sweet Home Albania” tells his and his parents’ story, of a father that risks his life to give a better future to his family. It’s a story of migration, love for one’s country and the pain of leaving it. It’s a migration not out of choice, but out of obligation, because there is no future in Albania for them. It’s a universal immigration story. Aleksandros and his show now landed in New York for the InScena!2017 that will take place from May 1st to May 15th.

Giampiero Rappa provoked me. We met right after graduating from the Accademia in Rome. We met and he asked me where I was from. I told him the story of my life and, especially, my parents’, life, which I consider much more heroic than mine. He asked me to write down some notes, almost like a diary and told me: “you write everything that comes up in your mind, without thinking about it too much.” It was summer, so I left right away for Albania. I didn’t write much about that time. When I came back, I didn’t leave the house for three weeks. Then, Giampiero and I met, and I give him the monolog that is now 99% of what I do. Shortly after, we started to work and the show stated to take shape.

This is very hard question to answer… I don’t get involved with cultural promotion. As a young artist, I can say that one way to do it is to create a high-quality product. Without thinking about how and where to take it. I believe that the real problem is not to tour with the show, which is just a consequence of a bigger problem: the average quality of the shows is low and to find what you’re looking for in the theatrical world, you have to randomly find yourself in and off-off-off contest. You need to have the luck to be seen by the right audience. By the few people (like Donatella Codonesu and Laura Caparrotti) that really know how to do this job, and that really care about finding high-quality shows by going out of the diplomatic and political dynamics that characterizes the theater and that have so little to do with the real meaning of art. I believe that InScena! is a perfect example of an organization that is going in this ideal, right direction. Yes, this is my first time. I am very excited. I have been in New York a couple of times before. Last time was in 2009, I was 18. My aunt asked me if I would have liked to live and study there, but I said no. I was afraid of that city, so big it could devour a kid and spit him out who knows where. But I told her “I know one day I’ll come here, when I will have understood what I want to do in my life.” I didn’t look for that day, or maybe I did, but I feel like that day is here. I am ready, now. I am ready to face that reality. I am looking forward to compare myself with New York’s theater. I hope I will learn a lot and why not, maybe create a first working relations with the city and then come back there.

If I think than I am learning the script of Albania Casa Mia in English, you can clearly understand that my expectations for this trip are pretty high.

I want to know, I want to learn and I want to test myself in that reality. I hope I’ll live up to that city. I wish I can earn the respect of that public as I am earning it in the Italian venues I have been to. Of course, this time it will be much harder, but I love the challenge, the effort and the fear of this desire to charm the people there. I would also love to meet Stephan Wolfert again, an actor part of the Bedlam acting company. I had the pleasure to meet him in Rome last year and I gave him half of a ring as a promise that I will go get it one day.

This show deals with dynamics that are common all over the world through human history: the immigration phenomenon, which is both a current and uncomfortable topic, the father-and-son relationship, the love for one’s own family and the basic concept of “being in the middle,” which is not a geographical position, but an existential and uncomfortable condition that allows one to observe, breath and understand.

When I wrote the script for this show I didn’t want to raise Pietism. I just tell the story of my family and myself by trying to show things from another point of view, a perspective that we usually don’t even take into account.

I would like to leave a wound. One of those on your stomach, but that don’t hurt, that are good for you, that help awakening your sensitivity, that you will carry around with you for days after the show. A wound that makes the show unforgivable. 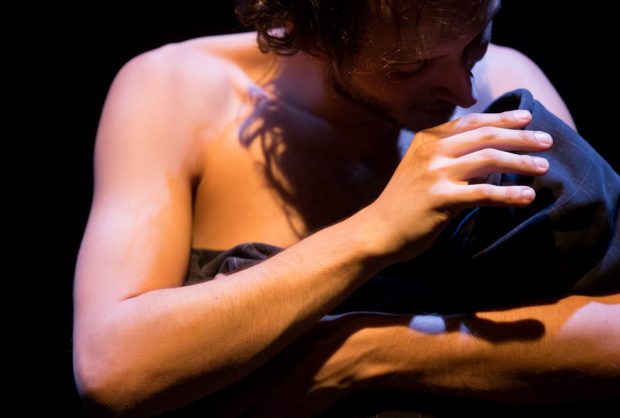 The show tells the story of a son who will grow up far from his country of origin. A theme that comes up often even in the so-called “new emigration” wave towards the United States. What does it mean to you to grow up far away from your native country?

It means to run away from a mother that doesn’t want her child anymore. No man will leave his own certainties, his own family, his entire past and life only for a future ambition. You need something stronger to provoke this break. Often, behind this wreckage there is the impossibility to keep on living in a specific place.

For me, concerning the emigration wave, “where one goes” is not really important, but “where one comes from” is and unfortunately, very often, people don’t even take this perspective into consideration, holding on to the (natural) fear of seeing foreign people as people who “take over” your backyard.

How much of your “Italiannes” and your “Albanesness” are there in your shows?

It’s my life, so I think they are implied in the way I face my job. I am like I am because I was raised by two Albanese parents in the Italian system. I am the result of this cultural mix and, at 25, I am still an unconscious part of it. But when you find yourself in the middle of it, indeed, and you know you are the result of something, I think that you never really know what you are. Because you can’t. You are you, and that’s it.

And if you want to know more details of what kind of “result” I am, I suggest you come and see me in May, at the “InScena!” Festival in New York.

See you soon and thank you.