Until July 9, the Museum of Fine Arts of Boston hosts the exhibition "Botticelli and the Search of Divine" with thirty works by the Italian painter that focuses on Botticelli's visual poetry and his different styles during the years, from mythological subjects to religious ones

Upon entering the MFA Boston’s exhibition Botticelli and the Search for the Divine,  visitors find themselves facing the small panel Madonna of the Book, painted by Botticelli around 1478-1480 and placed directly alongside the written introduction to the entire exhibition. In that exquisite painting, Botticelli portrays the Madonna and Child reading a sacred book, as Jesus appears to guide his mother’s hands toward an important passage. As far as we know, the label to the painting explains, there are no known precedents for Botticelli’s representation of the Virgin and Christ Child reading together.

Thus, beyond showcasing his attention to fine detail and deep use of colors, the panel also introduces viewers to Botticelli’s innovative qualities. But the choice of this panel to introduce the exhibition is highly fitting in another way as well: it challenges visitors to think about the underlying ties in Botticelli’s paintings between the visual and the textual. Several items in the exhibition further evoke and build upon this connection: a 1481 deluxe edition of Dante’s Commedia with engraved illustrations designed by Botticelli, on loan from Boston’s own Isabella Stewart Gardner Museum; the fresco Saint Augustine in His Study (ca. 1480), where the Saint, rapt in a spiritual vision, is seated at his table in front of an open book and a single page on which he has been writing; the Virgin and Child with Saint John the Baptist from about 1500, which, similarly to the Madonna of the Book, appears to show Jesus pointing to a particular passage of a sacred text. If the phrase “The Search for the Divine” in the exhibition’s title refers in part to Botticelli’s lifelong efforts to make “the invisible visible”, as the introduction states, then the placement of the Madonna of the Book at the entrance to this extraordinary exhibition subtly invites viewers to contemplate the surrounding works by Botticelli as constituting, in a real sense, visual poetry.

“Saint Augustine in His study”, Botticelli, 1480

Botticelli and the Search for the Divine is organized into nine thematic sections and features about thirty works by Botticelli and those in his circle, including his master Filippo Lippi, his master’s son and eventual apprentice Filippino Lippi, the Pollaiuolo brothers, and Jacopo del Sellaio. It also features the death mask of Lorenzo il Magnifico, attributed to Orsino Benintendi. Organized by the Muscarelle Museum of Art in Williamsburg, Virginia, where it was held earlier this year, and the Metamorfosi Associazione Culturale, the exhibition is supplemented with a painting (Virgin and Child with Saint John the Baptist) and a selection of rare books from the MFA’s own collection. It also includes loans from the Harvard Art Museums and the Isabella Stewart Gardner Museum. Although Botticelli’s two most recognizable paintings, La Primavera and La nascita di Venere, are not featured, as they are part of the Uffizi‘s permanent collection, the exhibition does include a stunning life-size Venus painting, which has not travelled to the United States prior to this occasion. 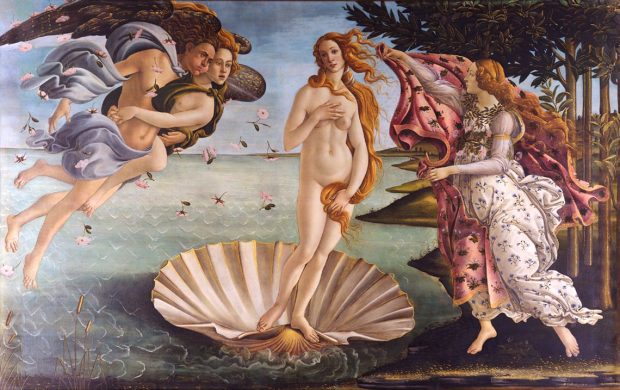 In addition to identifying patterns and revolutionary approaches in the works of Botticelli and those of his master, contemporaries, and pupil, the exhibition also explores how Botticelli’s style and subject matter changed in relation to certain politico-social developments during the late 15th century, most notably the rise of the Dominican friar Girolamo Savonarola in 1494, author of two wood-cut illustrated books (Tractato della Humilta and Predicha e Revelazioni) on display in the exhibition. Although not much is known about Botticelli’s career during this time, Botticelli appears to abandon mythological subjects and to portray only religious themes in a more somber and simple style, as is perhaps demonstrated by the altarpiece of Montelupo from 1499, where the Madonna and Child are flanked by Saints Sebastian, Lawrence, John the Evangelist, and Roch in an unadorned sanctuary. Saint Roch holds open his cloak to expose a plague sore on his thigh, evincing a note of melancholy and pain that is more common in the later Botticelli. An intriguing question that the exhibition raises and that is still debated today is whether Botticelli’s increasingly severe style was in effect caused by Savonarola’s teachings, and if so, to what extent.

“Virgin and Child with Young Saint John, the Baptist”, Botticelli, about 1505

The explanatory labels offer accessible and incisive comments to the paintings on display, as well as transmitting important discoveries made possible by modern technology, such as the use of infrared reflectography, which, when applied to the painting Virgin and Child with St. John the Baptist, exposes Botticelli’s preliminary drawing beneath the paint layers, showing, among other differences, that what became roses in the painting were originally lilies. The labels helpfully indicate some of the probable meanings attached to the flowers, colors, and small details in many of the paintings. The exhibition, which runs until July 9th, is prepared with such close attention as befits the artist around whose work it centers.

Not only is Harvard the wealthiest university in the world, it is also an institution that molds future generations of American leaders. Not only is it a space devoted to imagining a better society, but... [More]