One half of the exhibition concerns how foreigners, particularly the English and Americans, collected Italian art in the late 19th – early 20th century; the other is a display of highlights from the extensive polymathic art collection of American diplomat George Washington Wurts (1843-1928) and his millionaire second wife Henrietta Tower (1856-1933). On in Rome until March 4 “Voglia d’Italia” (“Yearning for Italy”) is a splendid blockbuster exhibition meticulously curated with detailed explanations in both Italian and English by art-historian Emanuele Pellegrini, professor at the Institute for Advanced Studies in Lucca, also a contributor and the compiler of its masterpiece catalog, sadly available only in Italian, but a bargain at 25 euros.  One half of the exhibition concerns how foreigners, particularly the English and Americans, collected Italian art in the late 19th – early 20th century; the other is a display of highlights from the extensive polymathic art collection of American diplomat George Washington Wurts (1843-1928) and his millionaire second wife Henrietta Tower (1856-1933). They were both Philadelphians, who lived at length in Rome. Thus “Voglia d’Italia” could count as two separate exhibitions; it’s even purposely housed in two different locations: Palazzo Venezia and the Vittoriano. Palazzo Venezia was built in 1455 for the Venetian cardinal Pietro Barbo, who later became Pope Paul II.  It was at times a papal residence, at other times the Venetian Embassy before passing into Austrian hands in 1797.  Since 1916 it has belonged to the Italian state.  During the Fascist era Mussolini used it as his headquarters, haranguing the crowds in the Piazza below from its balcony. At Henrietta’s death in 1933, five years after George’s, she left the Wurts-Tower art collection, that George had begun in 1876 and they’d expanded together to approximately 4,000 artifacts, to Italy, (actually specifically to the Palazzo Venezia), with the proviso that it remain in a museum. Sadly, for some unknown reason, however, Palazzo Venezia has long been Rome’s most underrated museum in spite of its first-rate collections of Renaissance art. The Wurts collection includes books, ceramics, musical instruments, lace, clocks, textiles, tapestries, 19th-century Russian hats, stuffed foxes and bears, 80 wooden religious statues from Germany, numerous European paintings, many of which have religious subjects, and artifacts from China and Japan, with dates from ancient Rome to the 20th century.  Until “Voglia d’Italia” with its some 70 artifacts on display it had remained in the storerooms of Palazzo Venezia.  Besides art the Wurts immediately bought the Villa Sciarra in 1902 on the top of the Janiculum Hill, today a public park, not as their residence but as a location to show off their art collection and host concerts and parties.  At George’s death Henrietta donated it to the City of Rome. 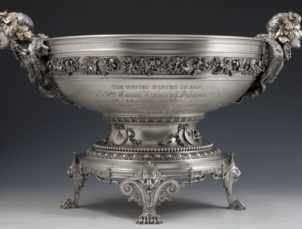 The Wurts’ half of Voglia D’Italia is divided into seven sections: “From Philadelphia to Rome” which sets the scene for a diplomat’s life of parties, receptions, and balls in Rome with a Wurts family tree and a Tiffany silver punch bowl given in 1874 by the United States to Count Federico Sclopis in recognition of his crucial role in resolving an Anglo-American dispute over England’s “criminal” protection of Confederate ships during the Civil War; “An American in Russia: the Roads of Diplomacy” for Wurts, after serving in Turin, Florence, and Rome for nearly 20 years, by this time a widower (his first wife fellow-Philadelphian Emma Hyde died in 1880), was assigned to St. Petersburg from 1882 to 1892, when he was transferred back to Italy. In Russia he collected hats, balalaikas, icons, porcelain dinnerware, and small bronze and porcelain sculptures. He married Henrietta in Philadelphia in 1898 and moved back to Rome forever in 1902. Hence “Thursday at Villa Sciarra: Conversation and Music” with its musical instruments, tableware and silver, which is followed by “The Rhine in Rome” with its wooden religious statues, a 15th-century tapestry of “Episodes from the Life of Christ and of the Virgin Mary” (an exhibition wall panel proclaims it the most significant in an Italian museum) from the Middle Rhine Region, and ivory and silver beer mugs, for the Wurts of German origin were Germanophiles.  In fact, after Mussolini’s alliance with Hitler they were snubbed by most of Rome’s foreign residents, in particular diplomats. 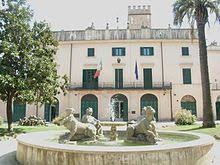 The fifth section is “An American Collection: Artifacts that had Belonged to Robert Jenkins Nevin (1839-1906)”.  A fellow art collector, he’d been the founder and the pastor of the American Protestant church on Via Nazionale, “St. Paul’s Within the Walls”, which is decorated with mosaics by Burne Jones.  Wurts bought the mosaics’ full-size preparatory drawings at an auction at the Roman antiquarian San Giorgi in 1907. However, the most striking works here are the very fragile papier maché angels made in Florence between 1423-64; there are only a few such examples still surviving. In Section 6 “Made in China and Japan” are Oriental, but mostly Japanese, artifacts: screens, porcelain, and magnificent silks that George bought during a visit to Japan while he was stationed in Russia and then again on his around–the-world honeymoon with Henrietta as well as in Rome and Paris, for Oriental art was then the latest rage in the Western world. A charming painting by Italy’s only internationally admired Impressionist De Nitis owned by Wurts shows a Western lady surrounded by her Oriental art collection. On display in Section 7, “The Last Wunderkammer” are photographs of the Wurts apartment in the Palazzo Antici Mattei in Rome’s ghetto bursting with its hodgepodge of artifacts.  It’s possible to identify many of the artifacts on display in “Voglia D’Italia” in their original settings portrayed in these photographs. A marble portrait head of Socrates, discovered during the excavations for the Vittoriano and which once belonged to Wurts

The other half of “Voglia d’Italia” is housed in the Vittoriano, nicknamed by tourists “The Wedding Cake” or “Typewriter”. “We decided to host the more general part of the exhibition here,” Edith Gabrielli, in-charge of all the museums in Latium, told me, “because it was being built while the Wurts lived in Rome, from 1885-1925, and was the gift the Italians gave to themselves to celebrate the Unification of Italy and to honor their first King Vittorio Emanuele II.  You could say it was the first artifact ‘Made-in-Italy’; Section One, “Excavations for a New Monument”, of eight sections covers its construction and many ancient artifacts uncovered during its builders’ excavations of the Capitoline Hill to make space for the Vittoriano’s foundations; some of these were bought by Wurts or by foreign museums.

“At the turn of the twentieth century,” the opening wall panel of Section 2, “Sales and Protection”, tells us, “there was a considerable increase in the sale of art objects, as may be seen from the publication of countless auction catalogues on display. Often, entire collections were put on the market.” After several unsuccessful attempts finally in 1902 Italy passed its first protection law.  “In 1907 the first Sopritendenza for the protection of historical and artistic heritage was established.”  This started a debate between protectionists who wanted to stop art from leaving Italy, art dealers who saw these laws as an infringement of free enterprise, and artists who made fakes to satisfy the growing art market, especially in the United States and England. 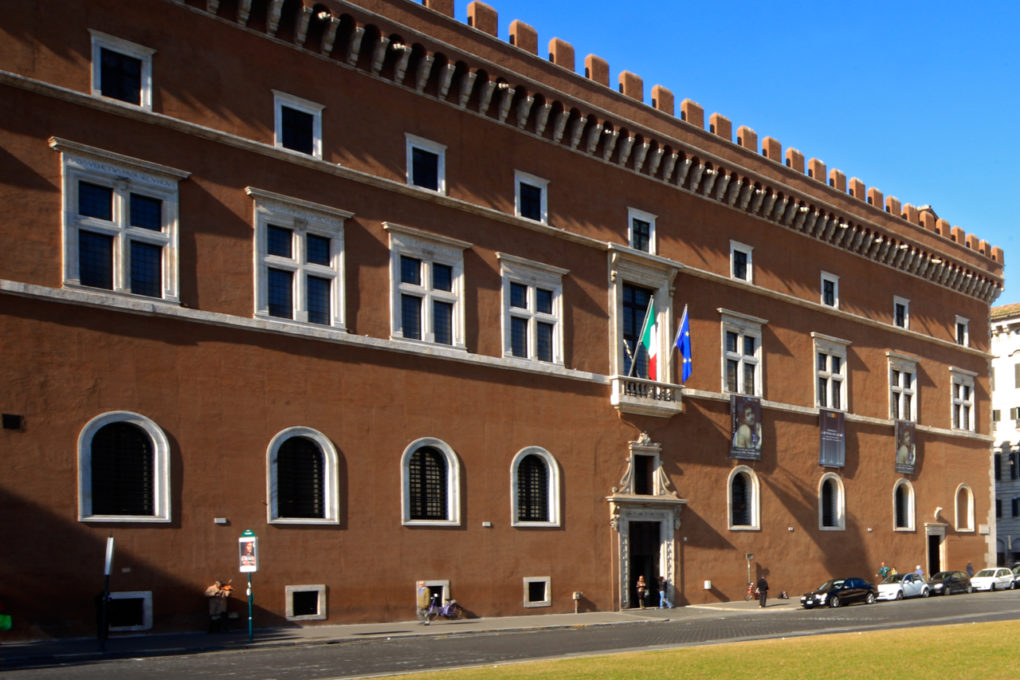 Although Wurts was also a mediator for the Metropolitan Museum, as Section 3, “The Art of Giving” illustrates, he was not the only collector to donate his collection.  Other contemporaries with Wurts’ polymathic taste, were Harvard-educated New Yorker Charles Loeser (1864-1928), of German descent like Wurts, who lived in Florence as did British-born Herbert P. Horne (1864-1916) and Frederick Stibbert (1838-1906). They all donated their homes and collections to Italy as did the Italian (of British origin) ornithologist and archeologist Joseph Issac Spadafora Whitaker: the Villa Malfitano Whitaker in Palermo. A double portrait, in imitation of Piero Della Francesca’s of the Duke and Duchess of Urbino in the Uffizi, by the Moldavian painter Nicholas D’Asnasch of the American couple Frederick Mason Perkins (1874-1955) and his second wife Irene Vavasour Elder is “Voglia D’Italia’s logo.  Works from their collection of medieval art are in Perugia and Assisi.

As fascinating Section 4 “Exchanges and Exports” points out “trade in art did not just involve sales.  There were other ways of transferring ownership, such as exchange.  In fact, dealers frequently offered works of art to the State in return for a permit to export others, or in exchange for a reduction in sales tax.  This led to fierce controversies because sometimes the exported item was considered more important than the one remaining in Italy.” Paolo Veneziano’s Choir of the Angels

Elia Volpi (1858-1938), the famous Florentine antiquarian and donor of art to Italy, was the first to organize these highly successful “exchanges”.  Numerous artifacts were then subsequently auctioned in New York and bought by J.P. Morgan, Isabella Gardiner, and Henry Clay Frick.

“A look at sales prices,” Pellegrini told me, “can come as a bit of a shock.  Objects that today can be considered for everyday use like these andirons from Tuscany, in those days could fetch up to 10, 20, 100 times more than this ‘Primitive’ painting, ‘Choir of Angels’ by Paolo Veneziano (c. 1333-between 1358/62) which Wurts bought for some 950 lire, the equivalent of $150 today.” Perhaps “Voglia D’Italia”’s most intriguing work-of-art is found in Section 5: “Intersections”:  a terracotta bust of St. Lawrence.  Donatello sculpted it c. 1440 for the lintel over the main door of the parish church of Borgo San Lorenzo in Mugello, where it remained until 1888.  That year the Florentine antiquarian Stefano Bardini persuaded the parish priest to sell it to him and left a copy in Mugello.  The next year he sold the original to Prince Johann of Lichtenstein.  Due to a “recent” glazing the Prince’s heirs unknowingly sold it at auction in 2003 as a 19th-century work in Renaissance style to the Paris-based Collection of Peter Silverman and Kathleen Onorato, the loaners here.  They’d understood its authenticity as had art historian Francesco Caglioti. Bardini’s copy is also on display.

On display in Section 6: “Made in Italy: A Question of Style” are works by contemporary artisans of the late 19th century in imitation of Renaissance style.  They are original works, not exact copies or forgeries.  For examples, the bridal chest painted with possible scenes of the Crusades from the Stibbert Museum in Florence and Wurts’ tulip-shaped chalices made in Murano. Also on display here are two artifacts bearing for the first time the words “Made in Italy”: a glazed terracotta bust of the Renaissance condottiere Erasmo da Narni, known as “Gattamelata”, as a young man and a glazed polychrome tile of a kneeling Madonna and Child, both from Faenza. Only much later did this phrase became a guarantee of quality. Instead, Section 7: “Trading in Falsehood” examines cases, not a matter of style, but of deliberate forgeries, contemporary work passed off as original antiques.  At the turn of the 20th century these works often hoodwinked connoisseurs and museums alike.  One example here is Alceo Dossena’s (1878-1937), then Italy’s most brilliant forger (in fact such a good forger that his works are collectors items), “Annunciation” from Pittsburgh, which was sold to Henry Frick as an original sculpture by Simone Martini (1284-1344).

Section 8: “1911, Dizzying Frieze” brings us back full swing. Although the Vittoriano was not yet completed, 1911 was the year it was inaugurated.  Section 1 concerned the excavation and its finds of this unique monument; on display in Section 8 are the preparation drawings and casts for its “classical” friezes.