The spectacle in Rome, which took three years to complete, is called "The Last Judgment: Michelangelo and the Secrets of the Sistine Chapel". It was produced by Marco Balich, a Venetian living in Milan who devised the opening shows of the Rio, Sochi, and Turin summer and winter Olympics. The Chapel wasn’t painted in a day either. Its 12 wall frescoes were painted between 1481 and 1484 by the greatest painters of the day from Tuscany and Umbria summoned by the Pope to Rome. The frescoes depict parallel episodes from the lives of Moses and of Christ on opposite walls: Perugino’s Moses’s Journey to Egypt vs. his Baptism of Christ in the Jordan, Botticelli’s Moses Receiving the Call vs. his Temptations of Christ, Rosselli’s Crossing of the Red Sea vs. Ghirlandaio’s Calling of St. Peter and St. Andrew, Rosselli’s Adoration of the Golden Calf vs. his Sermon on the Mount, Botticelli’s Punishment of the Rebels vs. Perugino’s Handing Over the Keys to St. Peter, and Signorelli’s Last Day of Moses vs. Rosselli’s Last Supper. Originally there were two more frescoes: The Finding of Moses and The Birth of Christ on the wall behind the altar, but these were both destroyed to make way for Michelangelo’s Last Judgment. 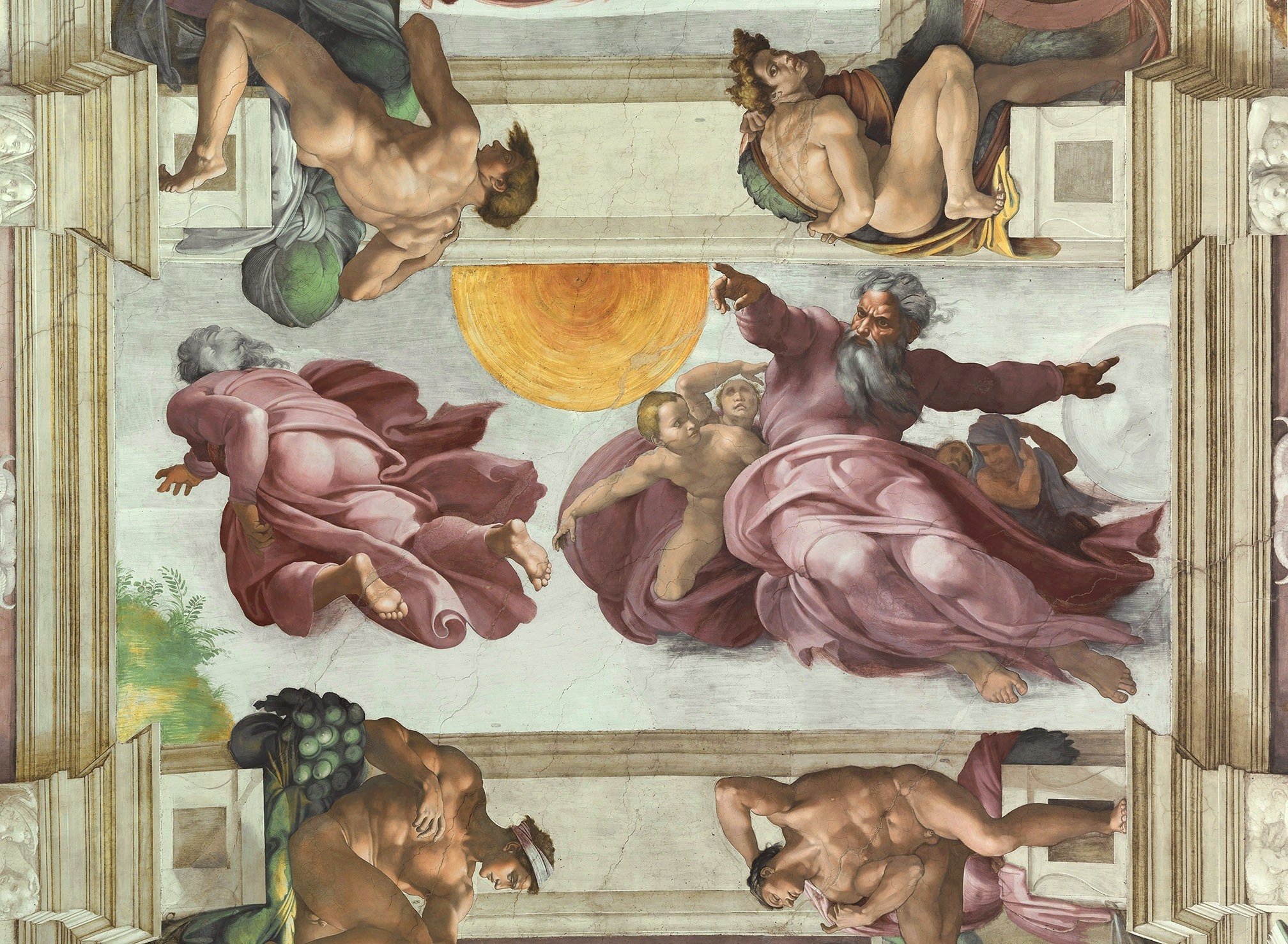 Several years later, after the papacies of Innocent VIII (reigned 1484-92) and Alexander VI (reigned 1492-1503), in 1508 Pope Julius II (reigned 1503-13) commissioned Michelangelo, who had come to Rome from Florence to design and sculpt the Pope’s tomb, to paint the ceiling of the Sistine Chapel in addition. Michelangelo was reluctant because he considered himself a sculptor and not a painter. Instead, Julius II successfully persuaded Michelangelo that he would be remembered for eternity for these frescoes and not for just another papal tomb, a project, in fact, the temperamental artist never finished, although it’s famous for its enigmatic statue of Moses. So working alone from an especially built platform it took Michelangelo four years, until 1512 to complete the ceiling’s 33 separate images. Except for its Classical Sybils, who appear because they were said to have prophesized the birth of Christ, the subjects are from the old Testament: God Dividing Light from Darkness, Creation of the Sun and the Moon, Separating Waters from Land, Creation of Adam, Creation of Eve, Original Sin, Sacrifice of Noah, The Deluge, and the Drunkenness of Noah. “Michelangelo’s depiction here of God giving life to man is generally seen as a high point of the Renaissance that changed the course of western art,” wrote Philip Willan in his article, “Sistine Chapel Will Be Rejuvenated by Extravaganza of Special Effects”, published in the London Times on October 24, 2017.

Then still many years later in 1533 Pope Clement VII (reigned 1523-34) commissioned Michelangelo to paint the wall behind the altar, which at the time centered around a painting of the Assumption of Mary by Perugino (a drawing of which is in the Albertina in Vienna). It took him from 1536-41 to paint his “Last Judgment”. Since March 15 and for at least the next year the story of the Sistine Chapel and of Michelangelo’s masterpieces is being recounted everyday except Good Friday and Christmas, sometimes three times a day, either in English or Italian, in a fantastic multimedia spectacle—indeed an extravaganza of special effects–at the 1,500 seat Auditorium della Conciliazione on the Via della Conciliazione, the street that runs from the Tiber to St. Peter’s Square. The spectacle, which took three years to complete is called The Last Judgment: Michelangelo and the Secrets of the Sistine Chapel. It was produced by Marco Balich, a Venetian living in Milan who devised the opening shows of the Rio, Sochi, and Turin summer and winter Olympics. His company Artainment has rented the Auditorium for a year and hopes that this latest attraction to open in Rome will become a permanent one perhaps after a world tour. “We Italians,” he said at the press opening, “grow up with absolute privilege in terms of taste and art, so I decided to showcase the excellence of the Sistine Chapel.  Millions of people, [supposedly 6 million per year,] visit it badly, in haste.  The show promises to unveil the secrets of the Sistine Chapel. Here the viewers are enveloped by the paintings and admitted to the otherwise inaccessible conclave that elects the Pope.”  The performances closest to this one that I’ve ever seen were the Christmas and Easter shows at Radio City Music Hall in New York City when I was a child. Balich’s show, which cost $10.5 to produce, lasts one hour and includes ballet, classy “Cirque du Soleil” acrobatics, six live actors and one actress sometimes on stage and sometimes mingling among the audience, a soundtrack inspired by medieval sacred music and composed specifically for this project by the rock star Sting, and video animation with 270° perspective of Michelangelo’s frescoes, of the conclave, and of St. Peter’s Square. With incense burning it thus stimulates every sense except touch.  I was invited by a PR company in Rome: Studio PuntoeVirgola to see it on March 22 at 5:00 PM.  As of that date over 40,000 tickets had already been sold on the web: www.giudiziouniversale.com and at the box office.  Publicized on the exterior of many Roman public buses, the tickets cost from 18 at weekday non-evening performances to 28 euros for evening, weekend and holiday performances.  Anyone under-26 pays respectively 16 and 18 euros and children between 5 and 13 years old 12 euros always. Headphones are available for 5 euros for translation in English, Chinese, Japanese, French, German, Portuguese, Russian, and Spanish. The Vatican will not make money from the ticket sales, but will profit from “contained” royalties from the performance. The project was authorized in 2015 by Antonio Paolucci, a former director of the Vatican Museums, but his successor Barbara Jatta, director since January 2017, has also overseen its content. She said that the extravaganza provides an unparalleled educational opportunity to bring art, culture, and faith to younger technology-savvy audiences.  It’s also an example of the Vatican’s attempt to modernize. Earlier similar such attempts were Leo XIII’s agreement to include photography in a 19th-century allegory he commissioned of “religion overseeing the arts” (he was also the first pope to be filmed giving a blessing in 1896), and Pius XI’s early adoption of the radio (he founded Vatican Radio in 1931). As Elisabetta Povoledo wrote in her article “Bringing the Sistine Chapel to Life, with the Vatican’s Blessing”, published in the New York Times on March 12, “The Vatican has approved the project, on the condition that it would respect the artistic, religious and spiritual values that the Sistine Chapel embodies. Balich had to live up to that promise…The Vatican followed the process step by step.  While it did not interfere with the creative aspects of the production, Vatican official kept tabs to make sure that the show’s content and references were historically accurate and did not stray from the righteous path.”

The opening scene seems to simulate an earthquake with large blocks of grey marble cracking and crumbling. Instead, the noise must be that of explosives in a marble quarry for in the next scene Michelangelo appears and starts carving his splendid 17-feet tall statue of the Biblical hero “David”, which dates to 1501-4and is now on exhibition in the Accademia in Florence.

The second scene shows the Chapel’s wall panels as they appear when a visitor enters the chapel, but without Michelangelo’s ceiling which was painted later. Then each Old Testament scene is enlarged and floats through the air to encompass the viewer as if he or she becomes part of the scene as does its New Testament counterpart.  One such comparison The Eyewitness Travel Guide to Rome explains: “In Punishment of the Rebels Moses was both spiritual and temporal leader of his people.  He called down the wrath of God on those who challenged his decisions, thus setting a precedent for the power exercised by the pope. In Handing Over the Keys to St. Peter, Christ confers spiritual and temporal power on St. Peter…” The third scene shows Pope Julius II ordering Michelangelo paint the Chapel’s ceiling in spite of the artist’s protests that he is a sculptor, not a painter.  Once again the whole ceiling, the largest fresco ever painted, is reproduced overhead and then each of its nine central panels is enlarged and floats through the air for a closer viewing with audio side effects such as wind and rain for Noah’s Ark.

The fourth scene is certainly the most dramatic as it recreates the funeral of Pope Julius II with a modern twist reminiscent of Pope John Paul II’s funeral with the pages of a Bible atop the coffin blowing in the wind.  This is immediately followed by an animated video showing the procession of cardinals entering the Sistine Chapel for the conclave and then of St. Peter’s Square and Bernini’s Colonnade to reproduce a habemus papam. 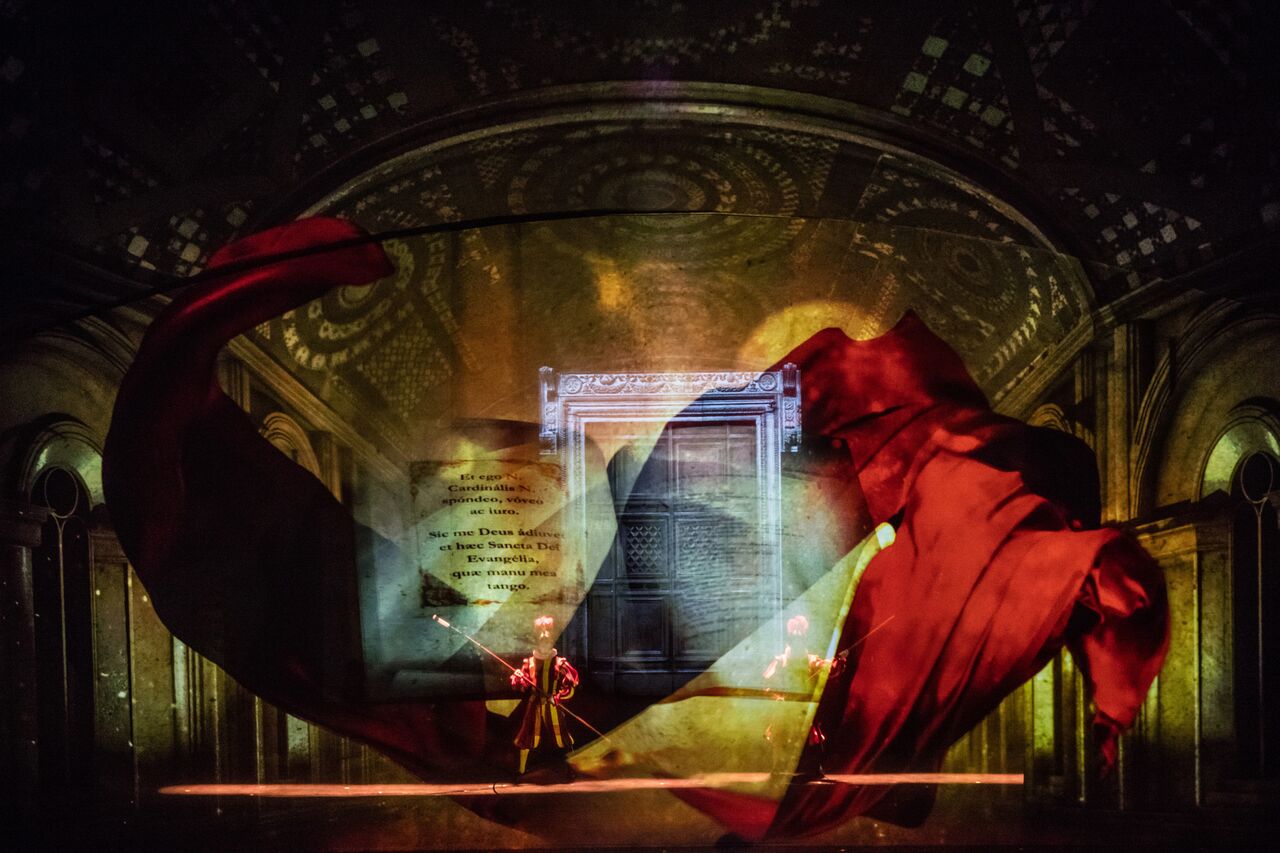 The fifth scene concerns Clement VII’s commission of “The Last Judgment”. The atmosphere and audiovisual techniques here are similar to those used for the ceiling with its scenes floating and enveloping the viewer. The robin egg’s blue of the fresco’s background, which became evident again after restoration (1980-94) and was criticized at the time as being too bright, makes each element of this wall stand out. The show’s grand finale is a prelude written and sung by Sting and a 16-minute narration of the Chapel’s history and artistic influence, with the actors revolving on a disk similar to a carillon’s.

I agree whole-heartedly with Dr. Jatta who said, after viewing Balich’s completed extravaganza a few days before it opened to the public:  “It’s something extraordinary, never seen before.  It’s not a documentary, but it has artistic and historical value. Obviously, it doesn’t substitute for a visit to the Chapel itself, but it gives the viewer the same privilege that we technicians have every year when we climb up the scaffolding to inspect the frescoes’ conditions.”

I would take her comments one step farther; we can finally view the frescoes from the same viewpoints as Michelangelo while he worked.  I see it as a unique introduction before a visit to the masterpiece itself. Buona visione!