What follows is an excerpt from ‘The Rome Guide’ by Mauro Lucentini, art columnist for La Voce di NewYork. More precisely, is an excerpt from those parts of the book entitled ‘Before Going’, that is which are meant to be read before the actual visit ,while the parts referring to the on-the-spot visit are labeled ‘On the Spot.’ This division is found throughout the book and is unique among guidebooks, being particularly suited to Rome, where it is extremely useful for absorbing the immense amount of information necessary to get an idea of the Eternal City and its 2700 years of history. All the excerpts to be published successively here will also come from the ‘Before Going’ sections. The complete book, including the essential ‘On the Spot’ portions, can be purchased on Amazon. You can read the previous excerpts by clicking here

The concept of sumptuous baths, whether public or private, goes back to ancient Egyptian and Ægean civilizations. Yet it was the Romans, with their technical bent, love of luxury and dedication to the more popular aspects of social life, who raised the baths to their peak, both as architectural creations and as public institutions. The oldest public baths in Italy have been found in Pompeii. Rome itself had none until Augustus. Custom had precluded such amenities: heated water, like the theatre, was considered too frivolous for the stern Roman nature. Augustus, however, wanted Rome to look rich and monumental and ordered his son-in-law, Agrippa, to provide the first public baths, which were relatively small and located behind the Pantheon.

Under later rulers, it became the policy to keep the people distracted and happy. Emperors competed in building the most impressive baths. Admission was very cheap and the baths became essential community centres. True to a certain Roman egalitarian spirit, though they were intended mainly for the populace, nobles and even emperors, such as Hadrian, often attended. Traces of smaller, more refined and exclusive baths have however been found in especially elegant quarters, such as the Aventine. The hugest Baths were created under Emperor Diocletian, and a small section of them survived to our days in their reincarnation as a Renaissance church created by Michelangelo (S. Maria degli Angeli). 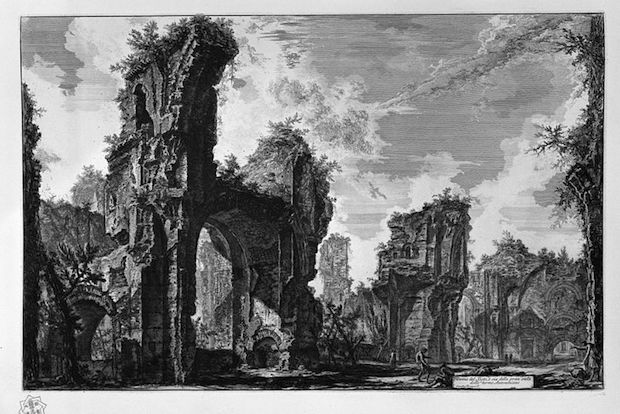 But the best preserved, most decoratively splendid and technically innovative of the baths were those built under the Emperor nicknamed Caracalla on the Aventine hill, where a substantial part of them can still  be seen today. All baths followed the same basic layout. Service areas, shops, gyms, a stadium, even libraries with giant reading rooms surrounded a vast courtyard and garden used for exercise. The baths proper included dressing rooms, oiling rooms and saunas for sweating and resting, where the oils, dust and sweat were scraped off with curved metal or bone implements called strygils. You’ll see a strygil on the famous statue of Apoxyomenos in the Vatican Museum. Bathers could choose between hot, warm and cold pools. On one side was a great swimming pool, used only in summer. Mixed bathing was deplored by moralists such as Quintilian and occasionally prohibited by emperors, such as Hadrian and Marcus Aurelius, who set separate hours for men and women..

It must be added that historians don’t agree on the precise rules and customs of the baths. The function of some spaces remains unknown. What is certain is that the baths were of paramount importance to the Romans, as many ancient writers have emphasized. Seneca, tutor and future victim of the emperor Nero, describes a day at the baths in a letter to his friend Lucilius:

I can’t stand the noise any more – I live right over the public baths. The racket makes me regret having ears. When I hear that heavy breathing, those throaty rasps, the moans real or for show, I can just imagine those athletes twisting and turning and lifting their leaden weights. Actually most of them take it easy and go for the massage and the greasing, but then I get slapping noises, which differ depending on whether the masseur’s hand is hitting flat or hollow. Let’s not talk of the ball players when they start keeping score! That’s the pits! Add to this the din of the brawlers and the screams of the thief when he’s caught. Not to mention the guy’s voice who likes to listen to himself while he bathes. And all the diving with great splashing. But at least all these people have normal voices. My nightmare is the depilator with his thin reedy voice, now loud, now soft, with which he tries to make himself noticed over the crowd. He never shuts up, but when he pulls out underarm hairs, then it’s the other guy who yells. And all the while the concessionaires are walking around calling for attention, each with his own special intonation – the drink vendor, the sausage seller, the pastry chef …

The Baths of Caracalla were planned and begun by Emperor Septimius Severus, but built mainly by his son, a man known to history by his nickname, Caracalla (or, more correctly, Caracallus). Born Lucius Septimius Bassianus, at the age of 7 the parents of this future Emperor changed his name to Marcus Aurelius Septimius Bassianus Antoninus Pius to solidify connections between the foreign-born Severan dynasty and that of a previously reigning and still politically important family, the Antonines (which included such extremely popular Emperors as Antoninus Pius and Marcus Aurelius). From this ‘nominal’ connection the Baths, too, acquired the official name of Antonine Baths.

This great public work was another attempt to gain popularity. Still another one, historically far more important, was Caracalla’s extension of Roman citizenship to all non-slave inhabitants of the Empire. But none of this saved this cruel and extravagant man from popular ire. Particularly resented was the fact that, obsessed with emulating Alexander the Great, he had greatly increased taxes in order to finance useless and unsuccessful military adventures. At age 29 he was finally murdered on orders of the Rome Praetorian Prefect (chief of police), Macrinus. The latter briefly succeeded him, before being assassinated in his turn, along with his child and co-ruler, 10-year-old Diadumenianus (his statue can be seen in one of the Vatican museums).

One of the largest and best preserved of the ancient thermal complexes, the Baths of Caracalla served up to 8,000 people daily in two or three shifts. They were renowned even in their own day for their technical perfection, the abundance and purity of the water – Caracalla built a new aqueduct for them – and the quantity and quality of the artwork. The baths were in perfect condition three centuries later, when they were named one of the wonders of Rome, but were abandoned shortly afterwards when Gothic invaders cut the aqueducts.

In the early Middle Ages the baths of Caracalla became a source of building material, like other Roman monuments. Much of their contents was dispersed through Rome and elsewhere. Capitals from the libraries have turned up on the columns of S. Maria in Trastevere. Capitals from a gym, with eagles and lightning bolts symbolizing Jove, are in the Cathedral of Pisa. Starting during the Renaissance the profusion of art turning up in the excavations caused wonder. It included famous sculptural groups, such as the Farnese Bull and the Farnese Hercules, now in the National Archæological Museum in Naples, the two granite basins in Piazza Farnese and the mosaic of the Athletes now in the Vatican Museum. The variety of marble floors and mosaics, a few still in place, was one of the largest decorative schemes of its kind in Rome.