Through this exhibition the “voiceless”, as they were referred to at various moments, are given a voice and a platform for expression. The vehicle for this expression is creativity, or more specifically, contemporary art, a category so vast and permissive that all participants are able to find their place within it

Italy’s permanent mission to the UN along with the international Christian association the Community of Sant’Egidio organized an exhibition, “The Art of Living Together,” at the UN headquarters at the beginning of November. Sant’Egidio is a non-governmental pro bono organization founded in 1968 in Rome that is committed to helping people with disabilities and advocating for their rights. “Romero, William, Young People and Maras” di Sara Curcio (2015) acrylic on canvas (This work is about El Salador, Bishop Romero, recently canonized, and William Quijano. William was murdered at the age of 21 on 28 September 2010 in San Salvador. A young man from the Community of San’Egidio, William helped poor children of his neighborhood, Apopa, through the schoold for peace. Violence from the ‘maras’, juvenile crime gangs, affects many youth. William dreamed that Apopa would become a place of peace.

The exhibition concluded with a closing ceremony this past week after being on for ten days. It featured works from various artists, both disabled and non-disabled, most of them Italian, from Sant’Egidio’s Art Lab. The Art Lab, started in 1985, offers integrated and creative educational experiences to those with mental disabilities who had been previously refused them. This exhibition falls on the fiftieth anniversary of Sant’Egidio’s founding and on the fortieth anniversary of the “Bersaglia law”, which saw Italy become the first country in the world to abolish insane asylums, cited throughout the evening as a sign of the country’s long-term commitment to the rights of the disabled.

Through this exhibition the “voiceless”, as they were referred to at various moments, are given a voice and a platform for expression. The vehicle for this expression is creativity, or more specifically, contemporary art, a category so vast and permissive that all participants are able to find their place within it. “Art speaks to everybody,” was how Mario Giro, Sant’Egidio’s Director of International Relations put it. The exhibition’s theme was “living together,” or co-existence: in other words, the need to find connecting pathways across different races, religions, abilities, and cultures, while recognizing the existence of difference and appreciating it – an apt theme for the UN. The UN headquarters in New York offers exhibitions year-round on a variety of themes and authors – another one that was simultaneously on display was a photography exhibit featuring “People on the Move” around the world. The UN’s cultural program allows such an incredibly diverse entity to try and represent itself, mostly by promoting standpoints that are relatively easy to digest and around which many of its member nations and representatives can rally. In the case of the subject of this exhibition, the UN drafted a Convention on the Rights of Persons with Disabilities in 2006, which went into effect in 2008. The empowerment of people with disabilities is also a priority of the current Secretary of the General Assembly.

This exhibition, and other such projects, accomplish more, however, than ethical posturing for mission-driven organizations; organizations, like the Church and the UN, which often have the best of intentions, but do not always deliver. When I made a comment hoping for more success in the work with the disabled and their agenda, Giro, who was one of the main organizers behind the exhibition, remarked the exhibition in itself was already a kind of success for them: it prioritized the needs of disabled people through the process of art creation. The feelings of freedom and self-expression that this creative process gave the artists involved – hundreds took part in the project, though fewer than a dozen were shown in the exhibition –represent a form of empowerment, even though these acts may seem small and ephemeral. “Art therapy,” one of the Art Lab’s strategies, highlights the power of art as a method for inclusion because of its encouragement of free self-expression. In the years to come, the Art Lab will continue to organize artists around a different theme each year and to prepare exhibitions on them around the world. 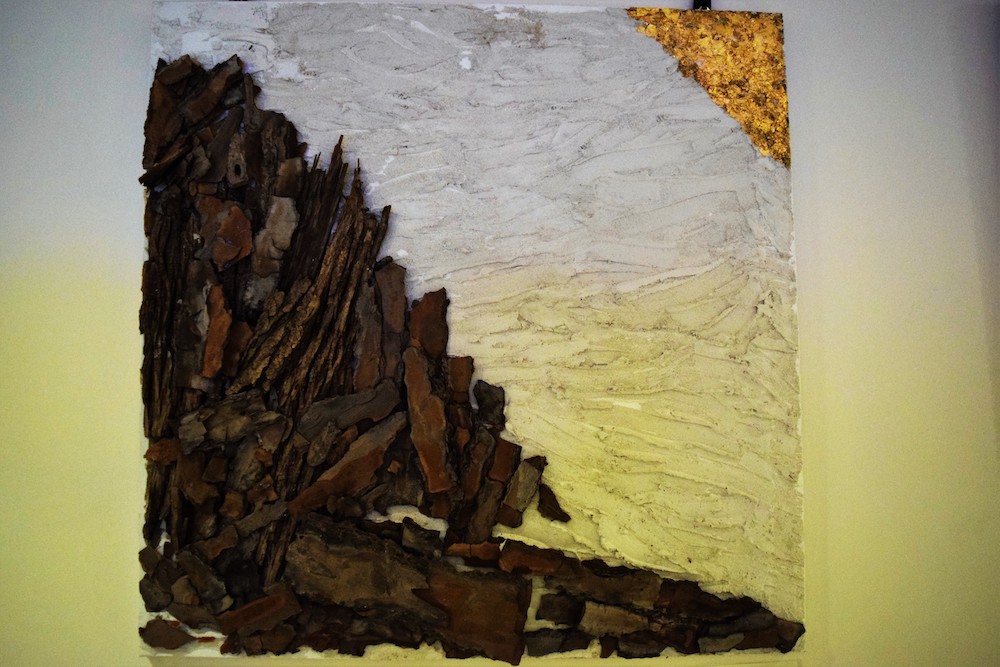 During the initial presentation at the closing ceremony, one of the artists, Alessia de Montis expressed her happiness and love for the group and the work she made as a part of it. She cited her piece “Listening,” which features a canvas onto which the word “ascolto” (I listen) is painted many times, in cursive, its color almost white, covering all the available space. She emphasized the importance of listening to others even though speaking often feels easier and more satisfying. Throughout the presentation, the public was asked to consider the importance of such seemingly simple and cliché acts as understanding, connecting, and, indeed, listening. Though at times such encouragements appear overly simplistic, perhaps they also accurately represent the small yet socially complex tasks required of peoples who hope to coexist. Another artist, Marianna Caprioletti, reinterpreted some of the classics in the tradition of Italian art, creating her own representations of Cupid and Venus as “aged.” In these works, Caprioletti directly addresses the exclusion of certain body types or social categories in the artistic canon and then speculates on their inclusion. As people are living longer, the role and personalities of the elderly must become not only a political, but also a cultural priority. 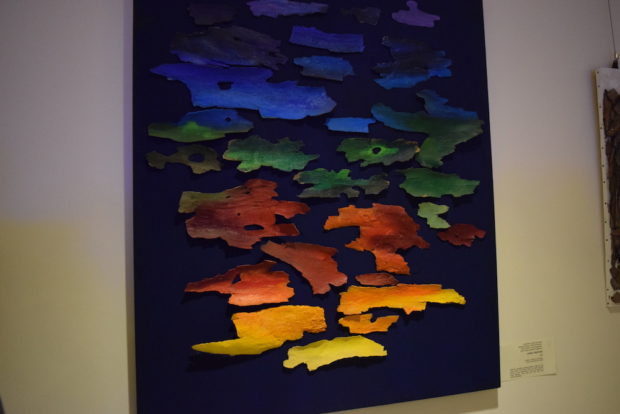 “Living Together” di Rosa Billera, Katia Buccinna’, Samanta Famiani, Tobia Ferrandino, Luigi Funedda, Riccardo Gazzillo, Elena Massa, Gabriella Tagliarino (2005), tempera, acrlic on tree bark, silicon, vinyl glue on canvas
Peaceful coexistence among peoples is hope for the entire world. The authors’ intent is to show, through harmony of the combination of colors, the beauty of living together. They used tree bark that they collected together.

Around the exhibition hall in the basement of the UN headquarters, the works on display addressed a wide variety of personal issues around the theme of coexistence. They were poetic and also – uncommonly enough – very genuine: it felt as though all of the works were born from a genuine desire for their existence. An interesting feature they shared was that they were all 2D pictorial representations, many on canvases, either paintings, drawings, or composed of diverse materials. There were no sculptures, photographs, or attempts at “newer” media such as performance and film. This was in large-part the case for the greater body of works produced by the artists with Artlabs, though it includes a few sculptures and several performances. It is interesting, however, that these were not shown at the exhibition. Nowadays, an art exhibition entitled “The Art of Living Together” would bring to mind socially-engaged art, or the work artists do within communities to literally embody coexistence. Yet here, “living together” was not the medium, but rather the theme, the aspiration; the art on display placed the onus for care and acceptance on the viewers, the institution, rather than enacting it.

The closing of “The Art of Living Together” at the UN ultimately highlighted why this exhibition had been a good choice. While showing a limited array of works, the show managed to strike a balance between aesthetic rigour, abstract values, and individual empowerment. The resulting pieces, genuine and beautiful, were a pleasure to observe; but they were also a gentle nudge reminding us of the voices, the desires, and the creativity of the members of the disabled community.