After having charmed Europe and Asia, the beguiling, visionary fables by Sicilian Filmmakers Fabio Grassadonia and Antonio Piazza, gets released in the U.S. to extraordinary critical and public acclaim. Come discover more about the film and its journey in this exclusive interview with the directors

An enchanting, remote angle of the Sicilian countryside. A territory dominated by a dense forest and a placid lake embraces the peaceful life of a little village. Two kids, Luna and Giuseppe, walk back home from school, innocently flirting with each other. They step into the forest, they play, they tease each other, everything is beautiful, everything is sweet. Suddenly a dog erupts, barking at them, chasing them, breaking the idyll. That’s the first sign, the first sentiment that something terrible is about to happen.

And in fact, right after this, as the kids tender love starts blooming, Giuseppe mysteriously disappears and he is not to be found. Luna immediately embarks on a journey to find the kid. Her heart is broken and her mind starts getting populated by nightmares, visions, and premonitions in a crescendo of disturbing episodes that will ultimately turn into obsession and hysteria. The people in the village seem to know something but they are reticent to speak: even Giuseppe’s family is wrapped up in an inexplicable code of silence. Luna is alone with the only help of her best girlfriend, her trustworthy owl friend, and her love for drawing through which she releases her pain. She knows Giuseppe is somewhere out there in the mists of the lake, and she is determined to find him… 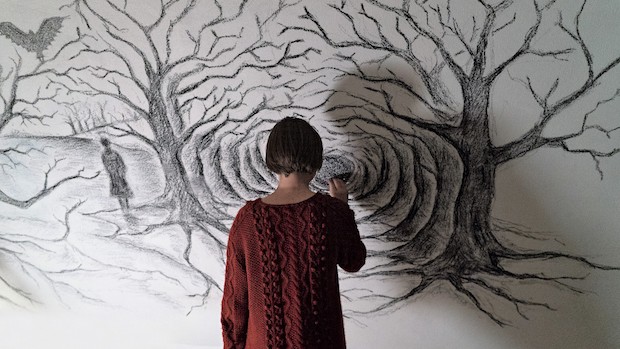 After their stellar breakthrough with Salvo, Critics’ Week Grand Prize at the 2013 Cannes Film Festival, Fabio Grassadonia and Antonio Piazza, sharpened their visionary skills to craft with Sicilian Ghost Story, a disturbing and yet romantic novella at the threshold of reality and fantasy, of the material and the immaterial world.

The storyline is inspired by the true story of Giuseppe Di Matteo (12), whose father Santino Di Matteo was a Mafia supergrass. Giuseppe was kidnapped on November 23rd, 1993. Mafia chief Giovanni Brusca, who was Santino Di Matteo’s friend and his boss, ordered the kidnapping. He was convinced that Santino would stop talking to prosecutors to save his boy. Brusca expected Di Matteo to withdraw statements accusing him of countless murders and of being the mind behind the assassination of prosecutor Giovanni Falcone. The Mafia kept Giuseppe imprisoned for 779 days until the tragical ending.

Grassadonia and Piazza’s take on this horrific page of Sicilian’s history delves deep into the heart of darkness of the story amplifying its brutality by counterposing it with the innocence of the two protagonists. It’s a world where the sleep of reason produces monsters but also a subliminal, morbid and malicious beauty that is hard to watch at times and still you can’t help by desiring to watch more. It is Luna, our brave heroine that can’t help but venture in this nocturnal hallucination of the dark forest where the straight way is constantly lost and constantly vanishes in ethereal, watery, epiphanies or her knight in shining armor, Giuseppe.

The movie’s narrative structure is inspired by the Hans Christian Andersen’s and Grimms Brothers’ fable canons interpreted in a contemporary vest and interpolated with aesthetic echoes of some of the movies that the two directors love.

“For Sicilian Ghost Story, our points of reference were American movies like The Night of the Hunter by Charles Laughton, an expressionist black and white fable where the symbolism of nature and water are very vivid and present in the narration like they are in our movie. We also love Japanese movies, and in this regard, Ugetsu monogatari (Ugetsu, Tales of Ugetsu), by Enji Mizoguchi was one of the models for Sicilian Ghost Story. The film recounts a love story between a human being and a spirit and it is in the line of Luna and Giuseppe’s fairytale,” stated Antonio Piazza.

Not only, an element that makes the movie ultimately a Sicilian movie set in a Mediterranean ambiance, is the iconography and the archetypes that the directors took directly from the Greek tradition. Like the role of the owl, the spiritual animal, sacred to the goddess Athena, in charge of the communications in between the world of the dead and the world of the living, or the typical descent into hell that any mythological hero has to go through in his journey. The film is supported by the phantasmagoric cinematography of Luca Bigazzi (The Young Pope), the atmospheric soundtrack by Soap&Skin and Anton Spielmann, and a pitch-perfect acting that is instinctive and spontaneous in the two protagonists, Julia Jedlikowska (Luna) and Gaetano Fernandez (Giuseppe), bidimensional and cold-blooded in its ferocity in the roles of the orcs, Filippo Luna (U’ Nanu), on top, and complex and more articulated in the roles of Luna’s mother, Sabine Timoteo and, Luna’s father, Vincenzo Amato.

The fortunate destiny of Sicilian Ghost Story started at Cannes Film Festival 2017 when it opened the 56th International Critics’ Week, a first time ever for an Italian movie, and received a ten minutes standing ovation. From then on the movie received many others standing ovations, and it won over both the International audience and the critics, from Europe to Japan, before landing in the US thanks to Strand Releasing distribution. The movie is now at the Quad Cinema in New York until December 13th, and it will debut at the Landmark’s Nuart Theatre in LA on December 14th. Strand will then release the movie in the rest of North America.

Find out more about the film and the American release in this interview with Fabio Grassadonia and Antonio Piazza.

Tell us more about the Sicilian setting in which the story takes place. Sicily seems to be a key protagonist of this movie with its nature that his motherly and malevolent at the same time, sweet but harsh, sunny but crepuscular.

Antonio Piazza: “The choice of the locations has been crucial for this movie, actually, all of our reflection on the movie started from the locations. When we found the Parco dei Nebrodi in Sicily, where the movie is set, we knew it was the right one because we were looking for a place that was dense with forests and water. We wanted Nature to be a protagonist. We also wanted to show another side of Sicily. People often associate Sicily with summer and the vivid colors of yellow and blue, but there are many other shades in the Sicilian territory. We wanted a fairy setting. The forest is traditionally the place of danger, but in our case, nature here hosts and embraces the two kids and their love, it is the world of the humans, the village with its code of silence, the real threat.”

Guide us through the forest of the movie with its inhabitants and its symbolism in between dream and reality.

Fabio Grassadonia: “Our fable is a traditional one so we needed some archetypical figures. We needed the protagonist’s allies and we found them in the innocent animals of the forest as well as in the role of the best friend. The role of the owl is instrumental for the narration, he is the one who tells the story because he is the animal, sacred to Athena, that connects the world of the dead with the world of the living. On the other hand, the dog is an antagonist in the forest, he is an animal of the men, and the men in this movie, besides some exceptions, are horrific. We needed a witch and we thought that the role of Luna’s mother was the right one. This Swiss, foreigner mother, that is cold, severe and so different from the usual image of a Mediterranean mother works perfectly as the witch. We needed to portray the orcs and we found them naturally, from the true story of Giuseppe’s imprisonment. We didn’t’ want to humanize them, actually, we accentuated their grotesque features.” What is your feeling in witnessing the incredibly positive reaction to the movie from both the American critics and the general public?

AP: “We are so happy about it, we got some rave reviews from The New York Times, Film Comment, NPR – National Public Radio, The Hollywood Reporter. These reviews really went deep in the understanding of our artistic intentions. For an Italian, art-house movie, to be released in the theaters in the US is obviously very challenging. But we have perceived such an emotional feedback from the American audience, even though this is a Sicilian story. I think that part of the reason of the success of the movie is in its cinematic language that is more international and shows the influences of the movies that have formed us as cinematographers, from the American to the Japanese ones. I also believe that we have somehow intercepted a certain taste and trend of the moment in movies and TV shows, even though it wasn’t necessarily intentional. This aesthetic in between fantasy and reality seems to be very popular now and is probably symptomatic of the times we are living.

For the scheduule of the screenings in New York City click here.