The sculpture symbolizes the project’s message of love and community unity in light of post-election political divide and an epidemic of national gun violence and highlights intercultural principles of hope and faith. It pays tribute to the late artist Robert Indiana, whose well-known sculptures are universally recognized as symbolic of those same messages 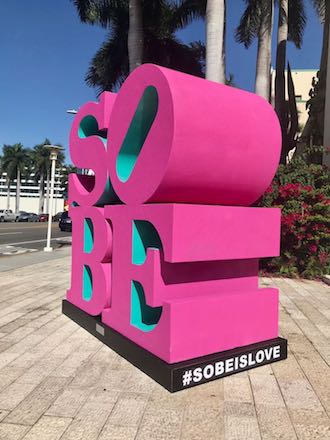 Over 500 people gathered in front of Miami Beach’s Temple Emanu-El on December 5th for the unveiling of the first of a series of public art collaborations, named SoBe is Love™.

The project SoBe is Love pivots around an almost ten-foot squared sculpture which spells S-O-B-E, the acronym for South Beach. The sculpture was conceived by renowned artist Claudio Ciaravolo and Italian entrepreneur and attorney Valerio Spinaci, and is soon to become the new iconic landmark of South Beach.

The sculpture symbolizes the project’s message of love and community unity in light of post-election political divide and an epidemic of national gun violence and highlights intercultural principles of hope and faith. It pays tribute to the late artist Robert Indiana, whose well-known sculptures are universally recognized as symbolic of those same messages.

Several celebrities attended the unveiling, including Dan Gelber, Mayor of Miami Beach, Cristiano Musillo, Consul General of Italy, Guy Gilady, Lieutenant Consul of Israel, Dan Oates, police chief of Miami Beach, as well as high-level representatives of the many different fields of business – from the art world, to music and entertainment, to the real estate sector.

Rabbi Marc Philippe opened the ceremonies with the lighting of the menorah, reminding the public how the SoBe is Love project tied in perfectly with the holiday of Chanukkah: “During Chanukah the central candle is used to light all the others. In the same way, each photo taken in front of this artwork and shared with the world holds the power to spread a message of light and love.” The public-at-large was then encouraged to transmit the project’s message of love by taking photos and selfies in front of the sculpture using the hashtag #SobeIsLove, as well as engaging with the project on various social media channels through the handle @SobeIsLove.

The artist was represented exclusively by Miami top art dealer Rudolf Budja, whose gallery featured a smaller version of SoBe is Love™ near multi-million dollars artworks from Andy Warhol, Wolf, and Robert Indiana. During the days since its unveiling, lines have been forming by the sculpture, as people from all over the world take turns to pose in front of it. The lucky ones were able to get a photo with the artist himself.

SoBe is Love™ is part of a broader collaborative global art project produced by Talking Arts, a Florida-based company founded by Melina Rosenberg and Valerio Spinaci. Talking Arts works with artists of all kind to pursue its vision of “Enabling Artists to Nurture Humanity”. This vision includes the creation of similar sculptures and events to be launched over the next two years in other iconic cities, including Rome, Hong Kong and Doha.