In spite of Vasari’s admiration and Verrocchio’s importance as a teacher, up-to-now there has never been an exhibition devoted to him. The event in the Palazzo Strozzi and the Museo Bargello aims to bring valuable insight into the early influence of Florence and of Verrocchio and his workshop on Leonardo’s oeuvre (seven on display here). The National Gallery in Washington D.C. will host a smaller, especially curated version, of the show from 29 September 2019 to 2 February 2020. In 1550 Giorgio Vasari (1511-1577), a Tuscan painter, architect, and “the father of art history,” published his first edition of Le vite de’ più eccellenti pittori, scultori e architettori (The Lives of the Most Excellent Painters, Sculptors, and Architects).  It’s a collection of biographies of almost 300 Italian (mostly Tuscan) artists from Cimabue (1240-1302) to his contemporaries and includes one of himself.  A second edition, substantially different from the first, adds some artists like Tintoretto and Titian from Venice, although Vasari is still criticized today for having given too much emphasis to Florence and Rome, mostly ignoring the artists from the rest of Italy and certainly the artists from the rest of Europe. The Portrait of Verrocchio

Vasari begins his biography of Verrocchio: “Andrea del Verrocchio, a Florentine, was in his day a goldsmith, a master of perspective, a sculptor, a wood-carver, a painter, and a musician; but in the arts of sculpture and painting, to tell the truth, he had a manner somewhat hard and crude, as one who acquired it rather by infinite study than by the facility of a natural gift. Even if he had been as poor in this facility as he was rich in the study and diligence that exalted him, he would have been most excellent in those arts, which, for their highest perfection, require a union of study and natural power.  If either of these is wanting, a man rarely attains to the first rank; but study will do a great deal, and thus Andrea, who had it in greater abundance than any other craftsman whatsoever, is counted among the rare and excellent masters of our arts.”

Yet, in spite of Vasari’s admiration and Verrocchio’s importance as a teacher, (even if Vasari recounts, that when Verrocchio saw his young student Leonardo’s superiority as a painter while they both were working on “The Baptism of Christ”, he vowed never to paint another stroke), up-to-now there has never been an exhibition devoted to Andrea di Michele di Francesco di Cione, who adopted the name of his goldsmith mentor Francesco Luca Verrocchi. For it was as a goldsmith that Verrocchio gained fame and the notice of his patrons, the Medici family, though he’s most admired as a sculptor, both of terracotta and bronze.  Indeed, Wikipedia tells us: “Few paintings are attributed to him with certainty.”  Those painted in his workshop, like most of the artworks created there, were a group effort, like The Baptism of Christ mentioned above. 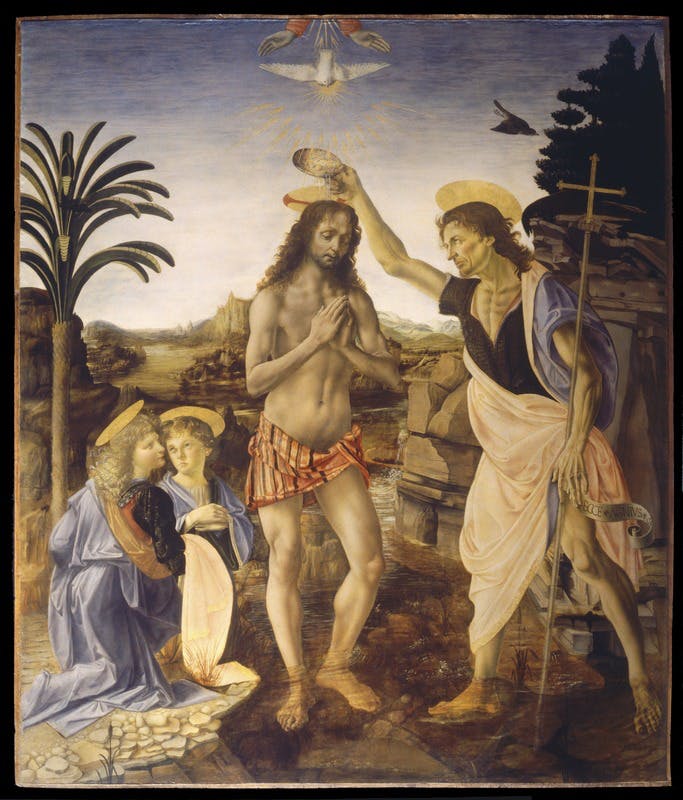 “Verrocchio: Leonardo’s Master,” an excellent magnificently illustrated catalog in both Italian and English editions (53 euros),  contains a timeline of Verrocchio’s life and of his major works, even if comparatively little is known about his private life– that he never married and helped his family financially. Verrocchio was born in Florence, the son of a tile and brick maker, turned tax collector, and lived at the corner of Via dell’Agnolo and Via de’ Macci. Verrocchio’s goldsmith workshop, where he was an apprentice, was on Via Calimala. He may also have been an apprentice to Donatello. Verrocchio’s first professional break came in 1464 when he began working, mostly as a sculptor, for the Medici: a tomb for Cosimo the Elder (1464), the Incredulity of St. Thomas (1467), a copper ball for the cathedral dome (1468), and their numerous commissions until c. 1480, when Sixtus IV summoned him to Rome to produce some of the twelve silver statues of the Apostles for the altar of the Sistine Chapel. Upon his return from Rome, he opened his own workshop near the Duomo on what is now Via dell’Oriuolo, in the same location where Michelozzo and Donatello had had their workshop. He continued to make works-of-art for Tuscany, particularly in Pistoia.  It is here that Leonardo (another polymath but with different talents and a loner), Lorenzo di Credi, Ghirlandaio, and Perugino worked as Verrocchio’s apprentices.

Leaving Lorenzo di Credi in charge in 1486, Verrocchio moved to Venice to start casting the bronze monument to Bartolomeo Colleoni, but he died in June of 1488 before he had finished. Nonetheless, this equestrian statue, now in Venice’s Campo Santi Giovanni e Paolo, is generally considered one of his masterpieces and the second most important equestrian monument of the Italian Renaissance after Donatello’s statue of Gattamelata (1453) in Padua. Lorenzo di Credi brought his mentor’s body back to Florence where it was buried in the Church of Sant’Ambrogio. The exhibition “Verrocchio, Master of Leonardo”, which spans his artistic output in Florence from 1460-1490, is on in the 16th-century Palazzo Strozzi, once a private home, and in the Museo Bargello, both in Florence, until July 14th. “It brings together for the first time”, recounts the press release, “masterpieces by Verrocchio from collections around the world, contextualized by works from his forefathers and peers as well as by the pupils he worked with intensively in his workshop. Curated by two of the world’s leading experts of 15th century art, Francesco Caglioti and Andrea De Marchi, the exhibition showcases over 120 paintings, sculptures and drawings with loans from over seventy major museums and private collections across the world, including the Metropolitan, The National Gallery of Art in Washington D.C., the Louvre, the Rijksmuseum in Amsterdam, London’s Victoria and Albert, and the Uffizi.” Several have never been displayed in Italy before. Twelve were restored expressly for this exhibition.”

The exhibition is one of the many events worldwide to celebrate the 500th anniversary of Leonardo’s death.  It aims to bring valuable insight into the early influence of Florence and of Verrocchio and his workshop on Leonardo’s oeuvre (seven on display here).  The National Gallery in Washington D.C. will host a smaller, especially curated version, of the show from 29 September 2019 to 2 February 2020. “Verrocchio: Master of Leonardo” is divided into 11 sections:  1) “Verrocchio between Desiderio and Leonardo: The Female Portraits” where it’s possible to compare the hands of Verrocchio’s Bust of a Lady with Flowers (the first female bust with arms and hands, usually in the Bargello) and Leonardo’s Study of Female Hands, loaned by Her Majesty The Queen from the Royal Collection. 2)”Verrocchio Between Desiderio and Leonardo: The Ancient Heroes and The David” 3) “Verrocchio and His Followers: the Madonnas, Between Sculpture and Painting”, 4) “Verrocchio as Fresco Painter”, 5) “The School of Verrocchio as Painter Between Ghirlandaio and Perugino”, 6) “Verrocchio in Rome, Verrocchio and Rome”, which, “according to Vasari, played a crucial role in Verrocchio’s art and career; he lived there under Pope Sixtus IV (1471-84) and “it was there that he decided to leave the goldsmith’s trade for sculpture, to follow in the footsteps of the ancients.” 7)“The Winged Boy with Dolphin and Sculpture as the Master of Space”, 8) “Verrocchio For Pistoia: The Forteguerri Cenotaph, The Madonna di Piazza and Lorenzo di Credi”, 9) “From Verrocchio to Leonardo: The Folding of the Drapery Immersed in Light, 10) (at the Museo del Bargello) “Apex: The Incredulity of St. Thomas and a New Face of Christ” and 11) (at the Museo Bargello) “Verrocchio and his Rivals: the Crucifixes”.

As the press release tells us, “The Bargello [housed in the medieval Palazzo del Podestà] is home to the most important collection of Renaissance sculpture in the world with masterpieces by Brunelleschi, Donatello, Luca Della Robbia, Verrocchio, Michelangelo, and Giambologna, only to name a few… For the first time ever, the Bargello hosts the “Incredulity of St. Thomas”, a masterpiece of the bronze casting and refined design that marked the peak of Verrocchio’s career as a sculptor and became the most celebrated and oft-imitated sculpture of its day…Three examples [in clay by Verrocchio] of this work, out of the six known at present, are documented and compared here, revealing its subtle interplay of variants compared to the group cast in metal at Orsanmichele. The many crucifixes in Section 11 show Verrocchio’s equally crucial influence in the field of wood carving, [in particular on Benedetto da Maiano and Andrea Ferrucci].” Although it might seem strange, the highlight, actually the colpo di scena, of the exhibition is not by Verrocchio but by Leonardo, probably while an apprentice in Verrocchio’s workshop. It is a small terracotta statue of The Virgin with the Laughing Child.  The famous art historian Pope-Hennessey (1913-94), Director of the British Museum (1974-76) had previously attributed it to Antonio Rossellino.  In London’s Victoria & Albert Museum since 1858 and probably the only sculpture that can be attributed to Leonardo, it is “presented in direct dialogue,” says the press release, “with a selection of outstanding draperies painted on linen by Leonardo, highlighting a number of very striking stylistic similarities. The work can also be compared with other famous works of the master such as the Uffizi “Annunciation” or the “Virgin of the Rocks” and “St. Anne” in the Louvre.”  “This superb Madonna”, writes Professor Caglioti in the catalog, “has no persuasive points of comparison with any other Florentine Renaissance sculpture, yet it has many points of comparison with Leonardo’s drawings and paintings, particularly with his youthful work but also with his more mature output.”

The catalog contains a list of Verrocchio places of interest in Florence to visit before or after the exhibition:

Basilica of San Lorenzo where he completed the lavabo or washbasin in the small chamber to the left of the Old Sacristy chancel and was involved in his teacher Desiderio da Settignano’s Tabernacle of the Sacrament, Monument to Cosimo the Elder de’ Medici (floor slab and tomb in the Museo del Tesoro), and Monument to Piero and Giovanni de’ Medici (“tomb of the Cosimiads” or “patri patruoque”). Basilica of Santa Croce and Museo dell’Opera where he was involved in Desiderio da Settignano’s Marsuppini Tomb, Gravestone of Fra Giulio Verrocchi; St. John the Baptist and St. Francis of Assisi.

Church of St. Ambrogio: a plaque commemorating this church as his place of burial.

Gli Uffizi:  The Baptism of Christ painted in Verrocchio’s workshop.  “Verrocchio designed and began the picture,” the press release tells us, “in c. 1468, possibly with Francesco Botticini’s aid, while Leonardo completed it ten years later.”

Museo dell’Opera del Duomo: Relief of the Beheading of St. John the Baptist (from the Baptistery) and “ball” atop the lantern of the Cathedral’s dome.

Related exhibitions: On in the Museo of Palazzo Vecchio from March 29 until June 24 is the exhibition “Leonardo and Florence. A Selection of Pages from the Codex Atlanticus”.

From June 6 to September 22, the Museo Galileo will host an exhibition entitled “Leonardo and his Books. The Library of a Genius.”