Our preview visit was extra special because it was as if Sordi himself had invited us. As if any minute he would come down the magnificent staircase and beckon us to make ourselves comfortable on his plush velvet-covered sofas and armchairs. Everything was exactly as he and Aurelia had left it. From the front door and salone, we wandered through the dining room, kitchen, his gym with his favorite bicycle and mechanical bull, movie theater lined with Liberty-style statues of the Muses, and his study full of memorabilia….

Alberto Sordi was Roman-born, Roman-bred, and Roman-dead. For, after celebrating his 80th birthday as the Eternal City’s mayor for a day, he died peacefully three years later, on February 24th, of lung cancer in his beloved Roman home, the site of half of an exhibition to celebrate this Roman icon’s 100th birthday. Once asked by the world-famous journalist Enzo Biagi, where to go on vacation in Italy and elsewhere, his immediate response was “Rome and Rome again.”

That Romans loved him as he loved his birthplace is clear: over 500,000 people paid their respects when he lay in state in Rome’s City Hall and over 250,000 fans attended his funeral in St. John in Lateran before his burial in his family tomb in Rome’s monumental cemetery, “Il Verano”.

Alberto Sordi’s career spanned some 60 years.  Besides acting in some 200 films, he also directed some 20 of these not to mention writing several of their screenplays.  Together with Ugo Tognazzi, Nino Manfredi, Vittorio Gassman, and Marcello Mastroianni he’s considered one of the greatest interpreters of Italian comedy in the 20th century and with Aldo Fabrizi and Anna Magnani its “Romanity”.

Still in school, Sordi’s debut as a performer was as a puppeteer as well as a soprano in the Sistine Chapel’s “white voice” choir and later as a bass in Rome’s Opera chorus. He continued to perform as a singer on the radio and on TV for the rest of his life.

His connection with the movies began in the early 1950s with bit parts and as the dubbed voice of Oliver Hardy.  His first major roles were as star of Lo sceicco bianco and 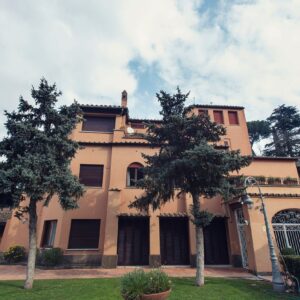 Last February 10th members of the Foreign Press Association were invited to Sordi’s villa on Piazza Numa Pompilio near The Baths of Caracalla as a preview of the celebrative exhibition originally scheduled to open there in March and then postponed until mid-September.  Our guide told us that as a child he rode from Piazza San Cosimato in the heart of Trastevere where he was born and resided, past the villa on his bicycle and fantasized about one day owning it.

The villa had been designed in 1929 by the world-famous architect Clemente Busiri Vici (1887-1965) for the Fascist Minister and Mussolini’s private secretary Alessandro Chiavolini (1889-1958) and his wife Virginia.  After World War II and Chiavolini’s arrest and sentence to six years in prison–though he was pardoned after only a year in jail thanks to “Togliatti’s Law” –for not quite a decade it was the official residence of the British ambassador to Italy.  When it was put up for sale, Sordi’s childhood dream came true. 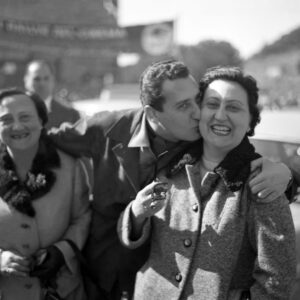 “Albertone” with his older sisters Savina and Aurelia. Aurelia is the one on the right. (Photo: Reporters Associati & Archivi, Srl.)

Not wanting to live on the Via Appia Antica like many of his movie-world colleagues because too remote from his beloved Rome’s hustle and bustle, in 1954 he outbid movie director Vittorio De Sica and bought the villa for a considerable sum in ready cash. He lived there with his two older maiden sisters, Aurelia and Savina, until first Savina’s and then his own death.  “Although he had several fiancées, often asked why he never married,” our guide told us, “he typically answered: “What? Why would I want to let a stranger live in my house?”  For him this villa was his refuge after a hard day’s work, sometimes filming on up to three movie sets a day.  Here he, gregarious and fun-loving, enjoyed organizing dinners and parties for his friends–that is, until Savina’s death in 1972, when he stopped all entertaining.

This exhibition is the first time that the villa has been open to the public.  Sadly, after the death of Aurelia, who suffered from dementia and died in 2014 at the age of 97, 37 distant relatives aspired to be her heirs and contested her will, but two years ago they lost the case.  Thus, the villa has become a museum, maintained by the Alberto Sordi Museum Foundation.

Our preview visit was extra special because it was as if Sordi himself had invited us. As if any minute he would come down the magnificent staircase and beckon us to make ourselves comfortable on his plush velvet-covered sofas and armchairs.  Everything was exactly as he and Aurelia had left it. From the front door and salone, we wandered through the dining room, kitchen, his gym with his favorite bicycle and mechanical bull, movie theater lined with Liberty-style statues of the Muses, and his study full of memorabilia, not to mention his green bathroom which was off-limits when “Alberto Sordi 1920-2020” finally opened on September 16 and will run to January 31, 2021.

Actually, our guide told us, “The bathroom was always ‘off-limits’ to everyone.  Even when his disciple, the now world-famous comic actor/film director Carlo Verdone came to visit or to practice lines, if he needed to make a pit stop, Sordi would summon Aurelia. She would arrive with a heavy bunch of keys and accompany Carlo to facilities downstairs.” 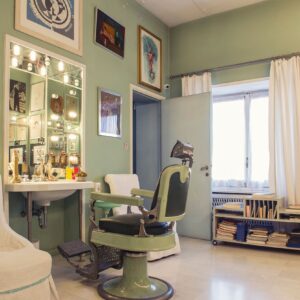 Just outside Sordi’s private bathroom is the villa’s most unusual room, a barbershop that he used not only for haircuts, but to practice lines and expressions in its three-way mirror.  Other keepsakes of note are the lamp he had made incorporating his father’s tuba (his father Pietro played in the orchestra of Rome’s Opera Theater); his hat collection; his beloved Harley Davidson WLA “Liberator” that was left behind by the US Army and which he had ridden in his masterpiece, “Un americano a Roma” (1954); and his art  (in particular paintings by De Chirico which he bought directly from his good friend the artist) and antique furniture collections.  Sordi often confessed that had he not become an actor, he would have become an art and antique dealer.

Not yet set up during our preview visit were three special temporary rooms.  The first concerns the private “Albertone”, his fans’ nickname: his relations with his many “fiancées”; his deep religious faith; his several homes outside Rome purchased over the years; his love of animals, particularly dogs and horses; and his many anonymous charitable gifts, even if he was unfairly dubbed a tightwad.

The second room is organized chronologically with photographs and costumes from many of his most famous roles. The third, a bit like a haunted house, is dark except for mirrors that light up at random and unexpectedly with black-and-white photographs of Sordi in his many different portrayals: doctor, traffic cop, gondolier, a NYC taxi driver, priest, an immigrant returning home for a visit unfairly detained for a crime he didn’t commit, a Mafioso, protagonists of Roman history, and a would-be American, just to name a few.

The exhibition’s second venue is located in three rooms of the Teatro dei Dioscuri at Via Piacenza 1, downhill from the Quirinal Palace and up an outside staircase from Via Nazionale.  Once a theater, in 2016, after major restoration, it opened as a cultural center.

The first room: “Storia di un italiano ’79-86” contains a video of Sordi discussing the homonymous super popular television program transmitted on RAI 2 in four cycles twice in 1979, in 1981, and lastly in 1986. Using film clips, Sordi explains why his many characters reflect the Italians of immediate post-World War II, of the 1960s economic boom, of the violence and terrorism of the anni di piombo, of yuppieism, and of Tangentopoli’s shameful political corruption.  For yes, Sordi was an ironic comic but, like Totò’s, his characters were a mirror of contemporary Italian society and the middle-class Italian.  He considered “Storia di un italiano” the most important project of his life and legacy so that future generations would understand 20th-century Italian history. 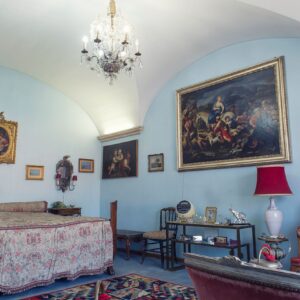 The second room: “I viaggi nel mondo” contains numerous photo albums of some of Sordi’s several trips overseas except those to the United States:  Israel in 1961, Brazil in 1964, London in 1966, Argentina in 1968, and Brazil again in 1970.  For Sordi, a passionate photographer, loved to travel. He believed travel offered life’s most important learning experiences.

The third room: “Il mito americano” recounts his love from childhood for the United States and the several trips he made there to star and/or direct his films.  When Sordi went to the United States for the first time in 1955, the producer Dino De Laurentis wanted him to stay in Hollywood, but Sordi refused, fearing he’d lose his inspiration: contemporary Italy, and his artistic freedom. So, he turned down the possibility to be the star of Billy Wilder’s “Barefoot in the Park”.  He returned in 1962 to star in “Mafioso”, again in 1967 for “Un italiano in America”, in 1973 for “Anastasia mio fratello”, in 1987 for “Un tassinaro a New York”, and in 1992 for “Assolto per aver commesso il fatto”.

Sordi’s love was reciprocated. In 1955, during his first visit, former President Harry S. Truman made him an honorary citizen of Kansas City, giving him keys to the city and a bull-shaped piggy bank since he couldn’t take the live one he’d been given back to Italy.  Both are on display. In 1986 MOMA organized a “retrospective” of his films; another took place at Lincoln Center in 1993.  Sordi’s most recent American recognition was the honorary citizenship of San Francisco in 1997.

That he still warms the hearts of many Italians is demonstrated by the impressive number of bookings from all over the country in the first week of the exhibition’s ticket sales, over 20,000.  Moreover, from October 20 through November 28, 20 photographs from the sets of his most popular films are on display in the Casa del Cinema in Villa Borghese.