Artist and designer Antonio Marras opened his “Aporίa” exhibit last night, curated by Valeria Orani,  on the occasion of the XVII Giornata del Contemporaneo (Italian Contemporary Art), featuring the site-specific installation “Su per le antiche scale” (Up the ancient stairs) of black string covering the walls and staircase at the Italian Cultural Institute of New York.

AMACI promoted the event with the collaboration of the Directorate General for Cultural and Economic Promotion and Innovation of MAECI and the support of the General Direction for Contemporary Creativity of the Ministry of Culture. While the “Andando Restando” event is a one-time permanence, the “Su per le antiche scale” work will continue to be available for the public through the entirety of January 2022. 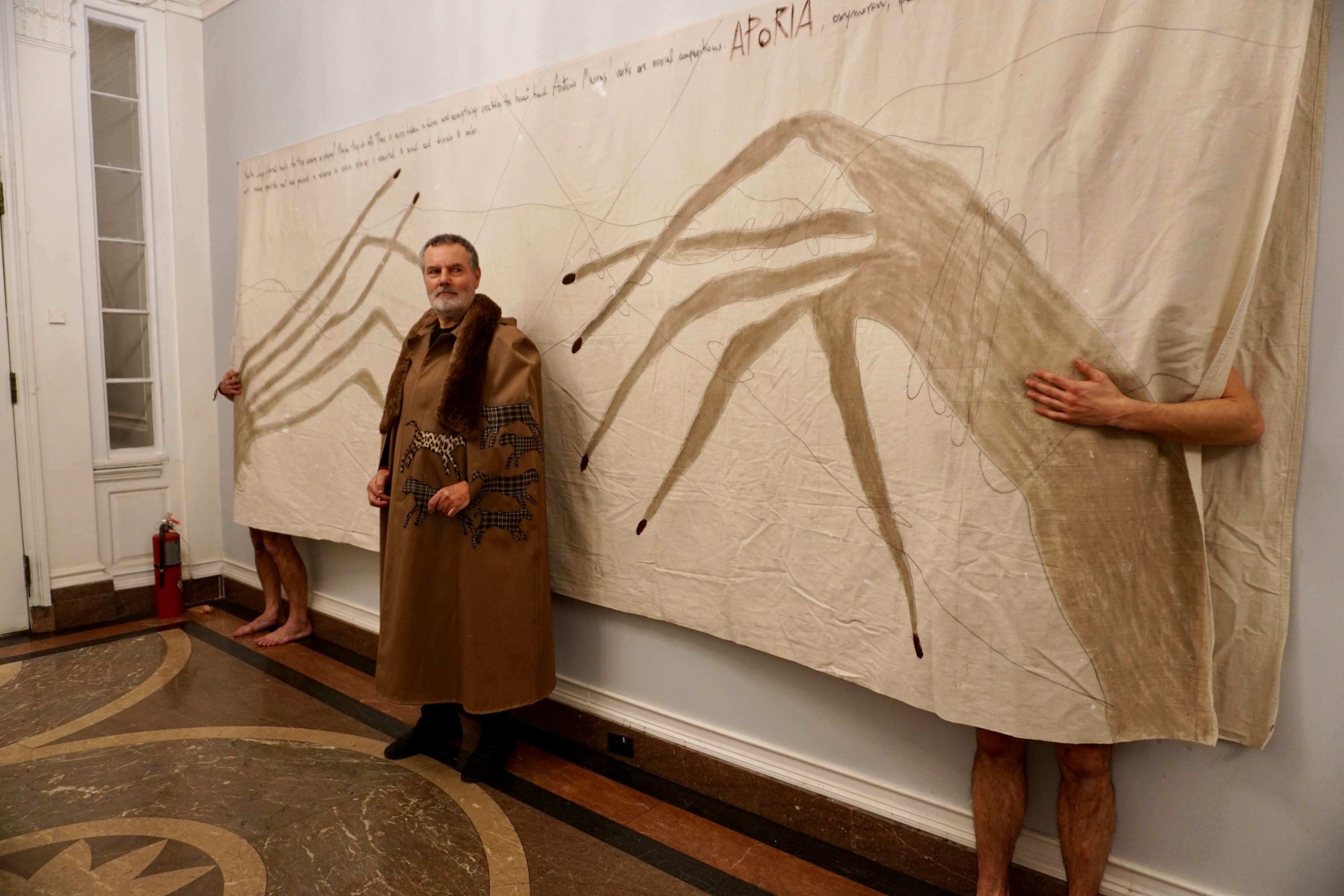 Upon entering the Italian Cultural Institute, the first section of Marras’ work was hard to miss. Hanging on a wall, a large canvas with drawings of bony-fingered hands intertwined in black string drawn on both extremities featuring a hand-written message above “Long-fingered hands. Are they weaving or playing? Maybe they do both. There is music hidden in fabric and in everything created by human beings. Antonio Marras’ works are musical compositions. APORÌA: oxymoron, paradox: forms of art that are sacred where opposites meet and generate a discourse in which silence is essential to sound and disorder to order.”

Maurizio Rippa singing at the top of the staircase. Photo: Lara Dreux/VNY Media

As curious guests and members of the press awaited in the lobby, a man of tall stature dressed in a long beige cape suddenly erupted in song, transforming everyone’s chitchat into sudden silence. Slowly going up the staircase that was covered in black string as he continued to sing, contralto Rippa was followed by two young performers, Da Costa and Napoli, sporting nothing but white underwear, large leather bags and oversized jackets draped over their backs. The performers’ ascent on the stairs, theatrically crawling and clasping onto the window’s frames, seemed intentionally difficult. A similar sentiment was mirrored when, having reached the second floor, Rippa’s singing of “New York, New York” was continuously interrupted by the semi-nude performers who loudly tossed their garments on the ground and spun around the piano as Rippa still attempted to play it.

After the chaotic performance came to an end, Marras gathered everyone back in the lobby to clarify further the intended message. “There is a string connecting all three melodies, a banal story,” said Marras. All three songs connect to the central theme of leaving Italy for the US in the 20th century, facing brutal scrutiny at Ellis Island, leaving loved ones behind, and feeling nostalgic for one’s home.

The first song, “Lacrime Napulitane” (Neapolitan Tears), tells the story of an Italian immigrant who, despite finding success in America, finds himself feeling lonely on Christmas Eve.

The second, “New York, New York,” was accompanied by a purposefully out-of-tune piano and symbolized the idealized yet naive dreams of success attracting immigrants from Italy. And lastly, the third song Rippa sang was “L’Addio” (The Goodbye), which held great meaning in its creation with Battiato and was featured as an homage to Italian singer Giuni Russo who died in 2004.

“The strings also represent our human bonds that stretch but never break,” explained Marras, comparing his drawings to a metaphorical umbilical cord. Expanding further on his canvas’ depiction of seemingly female hands weaving and his color choice of black for the strings, Marras concluded, “love, like death, is extremely intimate.”

Born in Rome, Italy, with parents from Israel, France and the United Kingdom, Lara Dreux was raised in a polyglot environment. An honors graduate in journalism and English at New York University, Lara has written for Modern Luxury and HoneySuckle Magazine. Passionate in Russian literature, fluent in four languages and ever-hungry for international news, she primarily focuses on women’s rights, the denouncement of fascism and art appreciation