Originally from Australia, Richie Allen didn't want to stay in California long term. Now he sees Rombauer as his home. They allow him to strive to make the best wines: “We don’t care how much you have to make but it has to taste like Rombauer Chardonnay.”

We want to think that the products we buy are made by well-intended people. As a wine lover myself, I am always curious to meet the people behind the wines. Sometimes I’m disappointed but sometimes I am pleasantly surprised. Around a month ago, I had the latter experience with the winemaker from Rombauer at a wine lunch.

Originally from Australia, Richie Allen immediately gives a sense of someone who is comfortable in their own skin. He is the 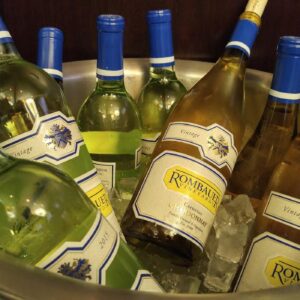 type of person who has been happy to toil their way up from the bottom with good old fashioned hard work. In 2004, he started with Rombauer in a harvest position, moving to enologist, to assistant winemaker, finally to  Director of Viticulture and Winemaking in 2013.

It was great hearing him spend a large amount of time talking about his team: how hard they work and how he knows that he is nothing without having a great team to back him. He works hard so he inspires his own team to work hard. It warmed my heart to see someone know the value of their workers and wanting to share the glory. Happy people make good wine and that carries to every man and woman who touches that wine in one form or another.

A Matter of Quality

Allen is the type of winemaker who is driven by the passion to make the best wine he can. Despite not intending to stay in California long term, originally envisioning going back to Australia, he now sees California, and more importantly Rombauer, as his home. The main reason Rombauer is his home is because they allow him to strive to make the best wines he can. For example, their wildly popular Rombauer Chardonnay never has a production quantity that they have to hit. This was surprising considering they have no problem selling 100,000 cases of their Chardonnay in a blink of an eye.

Allen said that the Rombauer family has the steadfast idea of the following, “We don’t care how much you have to make but it has to taste like Rombauer Chardonnay.”

Since 2011 was a difficult vintage for their Chardonnay, they decided to make roughly 40% less than their typical average quantity. They use 110 base wines to blend in the final product, but if any of those wines do not hold up to the Rombauer standard, then they are sold off as bulk wine. There were many other projects that Allen talked about with complete enthusiasm, from quality vineyards to paying more for oak barrels that fit his specifications.

Rombauer wines are not that expensive relative to other Napa wines yet they still place extra effort and extra love into every bottle. Sometimes money is not everything. The idea that one’s legacy is to make the highest quality product while empowering everyone around them to feel a part of that achievement is much more satisfying as being a life well lived.

2014 Scacciadiavoli Grechetto, Umbria, Italy ($11): Recently I was given a bunch of wines from Umbria to taste as samples while watching the producers talk about their wines on a webinar from Italy. This producer impressed me with their generosity of spirit as well and so I sought out their Grechetto to try. Grechetto can actually show well with a little bit of bottle age and this wine shows it with smoky, flinty notes. The lean, energetic body with blanched almonds on the finish makes this a very interesting wine choice for summer.

2015 Rombauer Sauvignon Blanc, Napa Valley, California, USA ($22): Since most people already know about Rombauer Chardonnay, I wanted to talk about one of their lesser known wines which is the first new white variety wine they have made in 20 years. This is different from many other Napa Sauvignon Blanc wines, with more focus on fresh acidity and lighter fruit flavors – not as rich as others can be. It has a hint of white stony minerality and a bright finish. Richie Allen, spending some time making New Zealand Sauvignon Blanc in the past, believes Sauvignon Blanc should always be crisp and this wine had some similarities to a New Zealand style except there were no herbaceous notes.