The fruit is falling off the trees and landing on the ground this time of year in Le Marche. The plums on our neighbor Achille's trees that line the road to our house are dropping to the earth to rot, and those on our plum tree aren't ripe yet. Jam must be made from these languishing fruits

The abundance of fruit and vegetables this time of year, in any country but especially Italy, means the womenfolk are busy making jam.  I have a theory it all circulates from one household to the other and few consume what they actually produce…

Here I am in Italy in the beginning of August.  The weather is a bit cooler and wetter than usual –may affect the olives and there will be less oil this year than in years past.  In my ongoing attempt to become a contadina, this is my third season making plum jam. I’ve had different degrees of success.  The first year I tried putting the plums through a food mill –a total waste of time since once they’ve cooked for about 20 minutes, the skin has dissolved and you’ve got a lovely puree without all that work (and clean up) of using the food mill.  I once tried using fruit pectin, which local purists strongly advise against. One year I made fig jam with the fruit from our trees, to which I added too much thyme.  It had a good consistency but the taste was a bit strange.

The fruit is falling off the trees and landing on the ground this time of year in Le Marche.  So whenever anyone goes to someone else’s house, they bring fruit or vegetables or homemade jam.  The plums on our neighbor Achille’s trees that line the road to our house are dropping to the earth to rot, and those on our plum tree aren’t ripe yet.  Jam must be made from these languishing fruits.  I think about world hunger and rescue Achille’s plums.

If you search “how to make plum jam” on the internet, 407,000 results appear.  So there’s really no need for another post.  All the entries on the web have beautiful photos of fruit and jars and bubbling pots.  They range in methodology from boiling the fruit for 3 days to boiling for five minutes.  Amounts of sugar and seasoning vary, as does when to add the sugar.  And they all boast of success.  Therefore I conclude there are many ways of making plum jam.  I asked my friend Angela, who is both a contadina and a nonna, giving her impeccable qualifications, how long the plum jam should boil.  She says 6-7 hours, or until it thickens to the way you like it.  And therein lies wisdom and truth – make it the way you like it.  So here’s my illustrated version of making plum jam. First, pick a pail of ripe plums. Rinse them just to remove any twigs, bugs or dirt, and drain in a colander or on a thick dishtowel.  If they haven’t been sprayed with pesticide, there’s no need to scrub them or to wash off the whitish film on their skin. Cut each plum in half and remove the pit; cut away any bad spots.  Into the pot they go.  Add the juice of half a lemon, 2 teaspoons of cinnamon and about 4 cups of sugar.  You can adjust seasoning after they have cooked for a while. Bring to a boil and then reduce heat to a very gentle boil.  Stir frequently so the jam doesn’t stick to the bottom of the pot.  After a while, all the skin and fruit will dissolve and you’ll have a thick liquid.  Keep it boiling for a few hours until it cooks down and begins to thicken.  Taste it, and add more sugar or cinnamon if you like. When you are happy with the consistency of your jam, bring a large pot of water to a boil and sterilize your jars and lids by boiling for 5-10 minutes.  Remove them carefully from the boiling water using tongs and place on a thick dishtowel.  Ladle in the warm jam leaving about 1/2″ empty space at the top.  Tighten the lids and turn the jars upside down on the towel for a little while, say 30 minutes.  Turn them right side up and you should have a good seal on the jars. 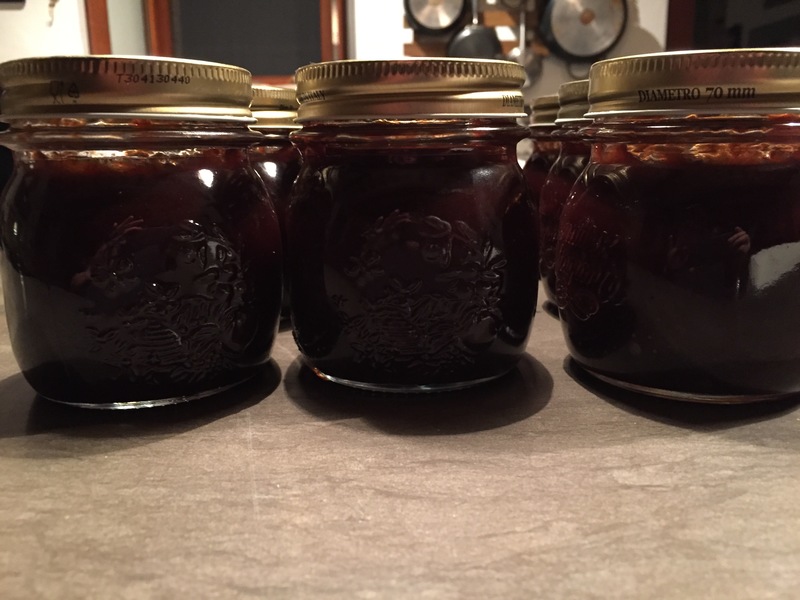 I got 11 eight-ounce jars with a bucket full of plums.  The jam came out more or less perfect, and even my Italian friends complimented me.  I think jam just kind of circulates from one household to the next in these parts –I’m not sure if anyone ever really eats it.  Now I’ll see how much I can pack into my suitcase to give to my friends in Brooklyn. Buona colazione!