Valpolicella is a region with great diversity and even the lesser respected wines are quite impressive. Established in 1968, Tinazzi is a successful winery. The family story speaks of passion, dedication and a loan from an English gentleman

Recently, I travelled to Valpolicella in North East Italy for a wine press trip. I had the fortunate opportunity to visit fourteen wineries to get a thorough sense of the range of quality and styles this classic wine region has to offer. I have always been a fan of Amarone and Ripasso wines – I like the old world charm of these wines – but I have to say that not only is there a lot more diversity than I had originally thought before my trip, but even the lesser respected Valpolicella wines were quite impressive.

The Valpolicella area is just north of Verona, the city that is known for one of the most tragic love stories of all time, Romeo and Juliet. I can speak from first hand experience that Valpolicella has stunning views that are covered with olive and cherry trees as well as charming vineyards. It is no wonder why it is a UNESCO world heritage site. Also, it is an area with a long-lived tradition of making pretty Valpolicella red wines, the more serious Ripasso and iconic Amarone dry red wines, and the lesser produced robust Recioto sweet red wine.

This winemaking area has a wealth of local grape varieties that add various textures and flavor complexity. Their long-lived winemaking practices were evident by some producers showing me that their family has been making wine for over 400 years. But it is also a region that has a mix of newer producers bringing innovation to the area while adhering to the time-honored traditions of making these historic wines. Tinazzi is one of Italy’s newer wineries, being only established in 1968, and they started making Valpolicella wines in 2001. The winery was started by Eugenio Tinazzi, but it was his son, Gian Andrea, who had intense passion and ambition to make it the prosperous enterprise it is today. His daughter, Francesca, is the one who led our tour and tasting at one of their properties. Francesca kept speaking about her father’s passion for the business: he never takes vacations, he never rests. The business is his life. I said that I thought her father sounded like he was from New York City to which she laughed, saying he did seem to be more American than Italian. Francesca Tinazzi at lunch during the press tour in Valpolicella

As she continued to speak about the incredible force of nature that is her father, she ultimately told a very special story that forever changed his life. When he was first trying to make their struggling winery a success, he was given a loan by an Italian Englishman who believed in him. Within five years, Gian Andrea paid back the loan with interest and the English gentleman sent back the interest saying in a note “friends are not paid with interest”.

It was a touching story that illustrated how some of us just need someone to give us a chance. Also, the story was a great example that an American “can do” attitude, with English generosity and most importantly, the charm, warm and intoxicating flavors of Italy make for some standout wines. 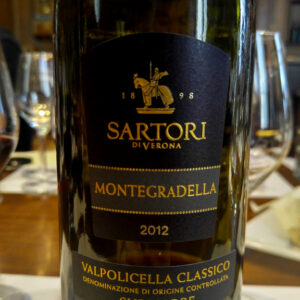 2012 Sartori di Verona, Valpolicella Classico Superiore “Montegradella”, Valpolicella DOC, Veneto, Italy ($13): 45% Corvina, 30% Corvinone, 20% Rondinella and 5% Croatina. I thought that I would recommend one wine from another impressive producer, Sartori di Verona, which is run by the Sartori family – a family that bought their first vineyard in the late 1800s. This wine is made from a selection of the best grape bunches coming from the “Montegradella” vineyard estate. Pure cassis notes with juicy flavors and touch of sage. I urge those who have only known the simple and cheerful Valpolicella wines to try this beautiful example of how lovely a high quality Valpolicella wine can be when made by a quality conscious producer. This is a light, aromatic wine that is best popped into the refrigerator for 10-15 minutes before serving.

2014 Tinazzi, CA’ de’ ROCCHI, Valpolicella Superiore Ripasso “Monterè”, Valpolicella DOC, Veneto, Italy ($25): 80% Corvina, 15% Rondinella and 5% Molinara. Ripasso wines are Valpolicella wines that have the grape skins from an Amarone or Recioto wine added to them, allowing a second fermentation to create more body, alcohol, structure, aromatics and flavors. This wine has interesting notes of volcanic ash, cinnamon spice with red cherry and prune flavors. It is a warming wine that has plenty of structure that keeps it refreshing until the last drop. 2013 Tinazzi, CA’ de’ ROCCHI, Amarone della Valpolicella “La Bastia”, Valpolicella DOCG, Veneto, Italy ($62): 60% Corvina, 20% Corvinone, 15% Rondinella and 5% Molinara. Amarone wines are made from dried grapes yet are dry wines. It is a big, bold wine typically ranging from 15-16% abv (this wine is 15%) yet the blend of grapes it uses gives it high acidity, lots of structure and incredible intricacy. This “La Bastia” Amarone has espresso, dark chocolate and a hint of balsamic notes with deep dark cherry flavors and a bright acidity that perfectly balances the lush body. Even within all the rich flavors there is an intense stony minerality that comes out in the finish.