A land historically unknown for its wine production, today rediscovers its vineyards, valorizes its resources and hoards tons of awards. It has become a source of pride for the region and for the numerous women from the wine world made in Calabria. Here, we’ll tell you their story

The tradition is ancient and goes back all the way to the Magna Graecia, when wine from Cirò was offered as a prize to the winners of the Athenian Olympic games. At the time it was called Entoria, “the land of the wine,” for the wealth of that exquisite nectar the Greeks loved so much. A wine that was later forgotten for many years until the Middle Ages, when its production started to reflourish and then reduce drastically in the following centuries.

For the real rediscover of the Calabrian wines we will have to wait until the Expo Milano, when the Calabrian Region presented to the world not only its distinctive product, the Cirò, but also its numerous and ancient indigenous vineyards and the nine DOP (Protected Designation of Origin) and 11 IGP (Protected Geographical Indication) wines that today hold so many awards in the world. Those vivacious wines from Crotone, Cosenza, Catanzaro and Reggio Calabria are the result of the beautiful weather that characterizes Calabria. You can taste the struggle and the hard work of many entrepreneurs who bet on these vineyards despite the numerous difficulties. And many of them are women, each one of them with their own story to tell. Stories made up of determination, pride and a lot of passion.

Lidia, the Passionate One

In 1990, after a lifetime in Bologna, Lidia Matera decides to go back to Calabria. Thanks to the love for a father who keeps on living on his Calabrian farm. The first few years had been very tough for Lidia, being a woman, and struggling to gain respect. However, with courage and determination, she carried on her father’s dream and gave a significant change to the Tenuta Terre Nobili, where every product encloses the tradition, the story and the culture of the places of origin and the love of all the people that contributed to its production. The father had already collected the ancient vineyards of the area, with the goal of giving the glory back to the region that it once possessed. At the same time, he tried to identify the areas, within the company, where the particularity and the exposition of the land would grant high quality wines. Simultaneously, he created a wine cellar, at the time defined modern, where the implementation of fermentation technologies were allowed to enhance the aromatic and flavor richness of the local grapes.

Lidia, the agronomist, decided to focus only on the most noble vineyards: red berry Nerello and Magliocco and the white berry Greco. She concentrated on those and, starting from the 2000 harvest, she started to produce wines that express the warmth and the strength of the land from which they are rooted and the typicality of the vineyards of the territory in the townships of Montalto Uffugo, Alarico, Cariglio and Santa Chiara. It was an all around victory. Lidia Matera conquered a series of awards, among which was the silver medal at the 2012 Decanter World Wine Awards of London with the 2011 Cariglio vintage and again the silver medal at the World Contest of Bruxelles with the 2009 Cariglio.

The Pacelli Sisters: Not Only Wine An estate set among the hills north of Cosenza, which is a small jewel where nothing is left to chance, from the handpicking of grapes and olives to the production of cherries, from the certified organic farming to the reduced use of sulfur dioxide. And again, from the testing cellar to the conservation of the eighteen-century residence Casino di Caccia that dominates the estate.

Carla and Laura, with their mother Clara and their father Francesco, bet on this estate in the heart of Calabria with an terroir that has been neglected, and they were right.

The red wines are obviously the strength of the Tenute Pacelli with two magnificent reserves like the Pauciuri from Barbera and Cabernet grapes, from the oldest vineyard of the farm (almost 50 years old), and the Tèmeso from Magliocco and Calavrese grapes, the old and indigenous Nero d’Avola. However, since the sisters are young and resourceful, they also bet on the white wines, as the single-variety Riesling to produce the Barone Bianco, a perfumed and still white, also available as a blend of Chardonnay and Malvasia Bianca, and ZOE, the new sparkly wine produced following a classical method based on Riesling grapes.

The wines produced at the Tenute Pacelli are difficult wines to forget, probably thanks to the melting pot created by the fusion of their father Francesco and his Neapolitan heritage and their mother Clara’s Istrian heritage. In order to get to know them personally, you only have to carve out a few days of relaxation for yourself at the estate. A pastel color colonial house, decorated with a country chic style and organic farm-to-table products and an oasis of peace all around. What else do you need?

Roberto, Caterina’s father, is among the first ones in Calabria to adopt organic agriculture at the family farm located not too far from the sea, among the low hills from which you can glimpse the blue contour of the water. Here, each choice is targeted to the constant search for high quality and the manufacturing of the products of the land with new and modern technologies. 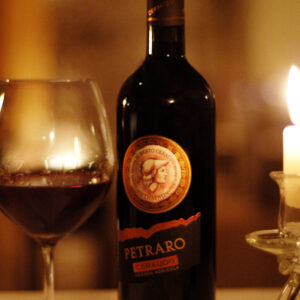 The white wine varieties are planted in the highest areas that allow them to express themselves at their best: Chardonnay, Greco Bianco and Mantonico, Pecorello. The Galioppo, a local wine, and the Cabernet Sauvignon are bed out right below, while an experiment is underway on other local wine varieties, among which are the Magliocco, on recently bought land.

Caterina, the daughter, is both an enologist and chef. And what a chef! A young talent that today brings the Calabrian cuisine towards new horizons and who is in New York in these few days with a delegation of his region in order to present the food and wine treasure of the area. Simplifying here and there and letting the flavors of this land come to light, like the citruses that are always present in all her dishes, at only 27 years old, the young chef is a star of the Calabrian cuisine. Trained in Niko Romito’s kitchen, she now manages the starred restaurant Dattilo in Strongoli, which is part of the family estate and was mentioned in the paragraph dedicated to Calabria in the 50 Places to Go in 2017 guide recently published by The New York Times. We are now in Palizzi, on the Ionian coast of Calabria, in the province of Reggio.

Here, nature dominates uncontested on the precious rows of the Cantina Nesci, an ancient family with noble origins.

Alberta, the latest generation, leads the family business that has been focusing on local wine varieties since the beginning with a creative attitude.

And here you see coming out of these rows, with a view on the sea, wines which color and perfume can preserve all the historical characteristics of this land.

As the Toto Corde, a rosé from Nocera with a unique amber color, a local black wine variety with ancient origins, or the Frasané, which is vinified in a single-variety.