We have eleven trees. Five are very young -- we planted them ourselves two years ago -- and as expected, each only made a handful of olives this year. Our two older trees produced like pro's, and the others were negligible.  Since the press will only take customers with a minimum of a quintale, or 100 kilos, we combine our olives with our neighbor Ippolito, from whom we bought our house.

For all the years that we’ve been coming to Le Marche, and it’s now 13 of them, I’ve always longed to pick olives.  It seems like the ultimate in Italian “farm to table” for this city girl– being out in the fields, the beautiful surrounding landscape, picking the fruit, hauling it to the press, watching the oil emerge and then of course, getting it into the kitchen.  Last year, when our daughter started college, was the first time I was here in Marche during harvest time.  But alas, it had “snowed after Easter,” creating too much moisture and ideal conditions for mosquitoes and worms to flourish. The olive crop was ruined and there were none in Marche. This year, 2017, I finally got my chance.

We have eleven trees. Five are very young — we planted them ourselves two years ago — and as expected, each only made a handful of olives this year. Our two older trees produced like pro’s, and the others were negligible.  Since the press will only take customers with a minimum of a quintale, or 100 kilos, we combine our olives with our neighbor Ippolito, from whom we bought our house.  Ippolito is 87.  His kids and grandchildren are busy with work and school, so we volunteer to help him with the raccolta, or gathering of the olives.  We’re psyched to get started so we keep asking Ippolito when he’ll begin.  Our friends the Tocci’s have already started, and for one beautiful Saturday, we are out in Saranella’s fields helping her, her husband and son, and the two Albanians who are assisting them in a massive collection. They reward us with two liters of the precious stuff.  It’s the first year they’ve had a big harvest and they are really happy with the result.  The oil is spectacular– strong and with a good bite at the finish.

The day finally arrives and around 9:00 AM, we hear Ippolito’s 1960’s era Fiat tractor lumbering and clanging its way down the steep hill along the path Ippolito has mowed for it.  The small, relatively flat field adjacent to our house has ten trees, most over 100 years old planted by Ippolito’s grandfather, and that’s where we’ll begin. Having done this his whole life, Ippolito is methodical and precise in preparing for the harvest.  We couldn’t have a better teacher.

The first step is laying the net. The nets are gigantic green squares, with a slit from the center point to one edge, creating two separate quadrants on the top half of the net.  If the ground slopes, the two separate quadrants are at the high point (so the olives can roll down the hill), and the opening wraps around the tree trunk.  Ippolito’s nets have grommets spaced along the edges to which he’s tied sticks with pointed ends. The sticks go into the ground, creating a lip all around the net to better catch flying olives and again, keep them from rolling down the hill.  It takes about ten minutes to lay the net around a tree. Olive pressing equipment, with the guys

Here comes the best part.  Armed with your rastrello, which is kind of like a plastic garden fork with nine tines, curled at the ends, you begin combing the olives off the lower branches of the tree. Ippolito uses the machinetta, which consists of a big car-sized battery that stays on the ground, connected by wire to a long handled tool that has five tines at the end that shake like crazy when the machine is turned on.  This works really well for olives on the higher branches and dense clumps of olives too tangled to comb with the rastrello.  The olives come flying off the trees — hence the nets.

When you think you’ve gotten all the olives off the tree — and it’s far easier to spot the black ones than the green ones, then it’s time to gather them up into a cassette, or plastic bin.  Starting on the higher point of the ground, you begin to gather up the net, gently guiding the olives to the lowest point.  Into the cassette they go and you’ve finished a tree.  Might take a half hour to 45 minutes.  Then you drag the net to the next tree and start the process over again.

It’s quite wonderful being out in the fields. First of all, we don’t have to do it and we have plenty of time on our hands.  So for us, it’s an experience, while for our friends, it’s a chore, time consuming, tiring and not necessarily so interesting.  But the land in our region is so beautiful and the weather was so mild and sunny– it was a joy just to be outside all day.  Second, our host, Ippolito, who is traditional in every good way, as the padrone, brings lunch.  You’re hungry from working hard, the weather is nice and even the simplest sandwich and piece of fruit taste wonderful and well-deserved while you’re sitting on the tractor taking a rest. And thirdly, each tree is different.  The shape, structure and age of the tree; are there one or more trunks; are the branches twisted, pitted, split; the shape of the leaves and the color and size of the olives.  The color varies from deep black to grape-like purple, to bright green, to variegated with a rosy blush that’s almost pink.  They’re beautiful.

We worked with Ippolito for two days. On the third day, a Saturday, we were waiting for the familiar sound of the tractor, and when we heard it, we realized that Ippolito’s whole family was on their way to help with our biggest tree. This tree is ancient and situated on a steep embankment so it’s hard to reach.  We’d placed the nets the night before, and the family arrived with long-handled rastrelli, the machinetta at the ready. How kind of them to start their day helping us!  We finished our big tree and a little sad one nearby it that had been moved when our house was under construction. We never thought it would survive, but despite its hollowed out trunk and spindly branches, it’s valiantly producing and held its own, adding to our total of about 60 kilos by Ippolito’s estimate. We were so proud. My husband Jesse with our two cassette of olives

Working alongside the Pascucci family the rest of the day, we finished another ten trees and then Ippolito said, “Basta.”  We knew he had more trees to pick, but he’s the capo. So we all piled into the ancient wooden cart hitched to the tractor with all the equipment and six cassette filled with olives, and the little tractor that could toted all of us to the top of the hill.  By this the third day, my body was used to the drill and I dispensed with the anti-inflammatories!

Two days later, we drove our two cassette of olives up to Ippolito’s garage and transferred them into a bag. Ippolito and his eldest son drove all of the olives– eleven sacks-full– in his son’s large SUV to the frantoio, or olive press in the next town over.  We’ve visited this frantoio before — in fact, I’d been there three times with out of town guests just to show them how it’s done — and Jesse had been there twice before for a pressing.  It’s located in what appears to be an old gas station.  The modern equipment is large and loud, and this time of year, operates 24 hours a day.  There were the requisite handful of old guys standing around and one solid nonna keeping watch– she and I were the only females. The eleven sacks of olives were waiting in the back room where, once it was our turn, they were fed into a hopper with a conveyor belt that sorted the olives from the leaves and twigs that come off in the picking. We did a final separation of fruit from twigs, and then the olives fed into a larger hopper to be crushed.  Two giant rotating blades slowly turned the olives into mash. There were two locations where we could see this happening.  Then the mash fed into a closed tank where the oil was extracted.  The next time you see it, it’s coming out in a thin drizzle and being mixed with water, essentially to wash it.  It then goes into a centrifuge where the water is spun out (similar to the last rinse in a clothes washer), and a slow stream of oil emerges into a large funnel at the top of your very own container.  The waste is funneled outside to the back of the frantoio, and moved with a front loader, possibly to be compressed into disks for burning in pellet stoves.

In total, Ippolito had 70 liters of which five were ours!  What bounty!  Sr. Micconi, who owns the frantoio and a number of other businesses, gave me a bag of the local farro, which he packages and sells in his little store in front of the press.  He seemed a bit stressed, understandably, given all of the commercial and local customers he serves at harvest time.  He’s an interesting character– we understand he’s written a book and he seems to know a lot about the Knights Templar.  He also seems to have a fondness for Jewish people and has a menorah on the top of his letterhead.  Just another person in our sphere of activity who’s full of surprises. 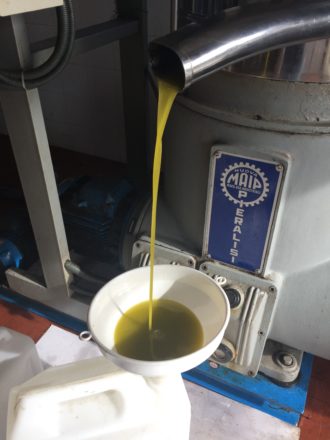 Oil streams from the press

By the time we left the oleificio, it was nearly 1:00 and we hadn’t yet had breakfast.  We stopped for a coffee in nearby Servigliano and dashed into a grocery store just before it closed to get some bread– essential for tasting the oil!  We got our oil home, poured out a precious puddle in a small bowl and dipped in the bread.  Wow.  Right out of the press.  The oil is cloudy and viscous.  It goes in smoothly and then gives you that bite at the end in the back of your throat.  It’s delicious and nothing short of a miracle.  The ultimate farm to table.  Now that it’s in my kitchen, it’s mine to have my way with.  Quite the thrill for us city folk.   Next year, who knows– it always depends on the weather, and they say good years for oil always alternate with bad.  But we’ll be hoping for another opportunity to do the raccolta, and as our little trees grow, so we hope, will our ultimate output.