The exquisite beauty of Saint-Émilion, Bordeaux, lies in its protected monastic history that is displayed by the limestone buildings which transport one to another place and time. It was certainly exciting to learn of all the progressive winemaking projects that Couvent des Jacobins was employing but it made me beam with joy to know that the importance of keeping the convent a sacred place was still paramount.

It may seem odd that even though I am an atheist, I have always been drawn to visit places of worship. It doesn’t even matter the religion or the structure itself; it is more the idea that it is a place that was constructed with the intention of elevating one’s thoughts and tapping into such an ethereal idea as the soul. Some places of worship are simple and plain since they are dictated by the philosophy that guides it, while others are constructed with such grandeur that it immediately evokes a connection to a celestial place. I recently had the pleasure of experiencing a special place that was a combination of simple humility balanced with majestic nobility at Couvent des Jacobins in Saint–Émilion, Bordeaux. Many times I feel the desire to live in two worlds: a progressive one that is always changing, and a world that is rooted in an ancient tradition that is grounded in a firm structure. Carved Figurine in the wall of Couvent des Jacobins

At one time there were many convents in Saint–Émilion – the estate of Covent des Jacobins was established by the “Jacobin Brothers”, a Dominican Order, in 1389. Xavier Jean, family member of Couvent des Jacobins, noted that there have been a lot of changes over the past 600 years. In the 1700s, the Jacobins Brothers were driven out by the French Revolution and then the revolutionaries seized the properties and used them as collateral against loans taken from wealthier families. The Couvent des Jacobins has had only three different families own it since that time; the last buyer was Jean Jean buying it in 1902. The property is run by two families which have branched off, the Jean family (from Jean Jean’s first wife) and the Joinaud-Borde family (from his second wife). At present, Rose Noelle Borde is the owner and currently lives in the Couvent des Jacobins.

Couvent des Jacobins has been a producer that has been overlooked in the past although they have everything a grand estate needs, such as top vineyards (some located by more well-known estates such as one near Château Bellevue and another close to Château Angélus), an innovative winemaker, Denis Pomarede, who has been with them since 1996, and a long history of growing vines. Also, Couvent des Jacobins is one of only four wine estates that have all of their facilities located in Saint-Émilion, but they have never gotten the recognition of the international press, and so, they have quietly made their wines for decades. 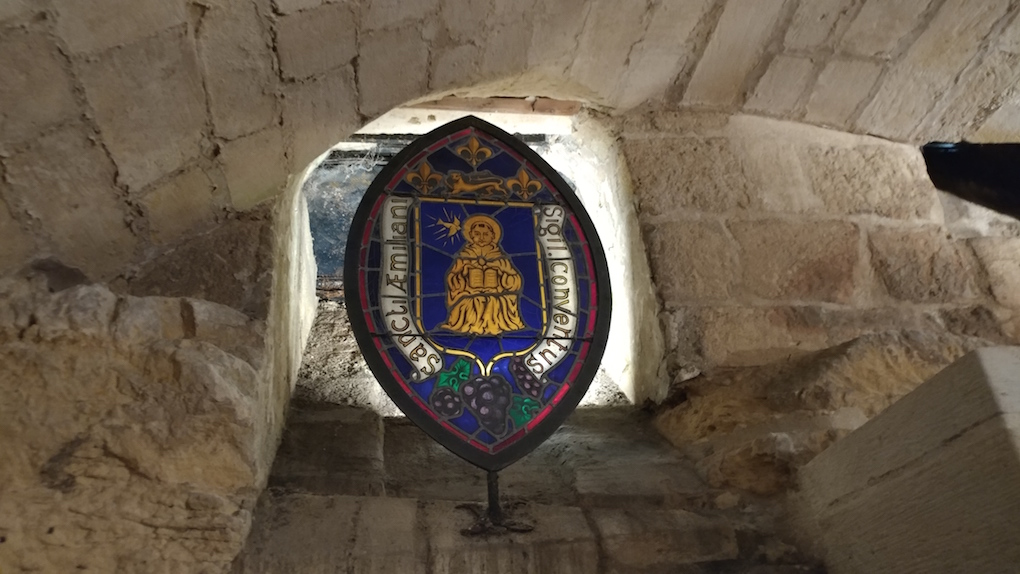 For the past 15 years, Couvent des Jacobins has implemented plans to improve every aspect of their product, from identifying 14 different soils in their vineyards, adding Petit Verdot with their Merlot and Cabernet Franc plantings, bringing in equipment specially designed by their winemaker so they can find ways to work within the smaller convent space while upgrading by vinifying different plots in various ways, as well as working with different types of oak, experimenting with using less sulfur, and transitioning to organic practices. It seems that the youthful spirit of Xavier Jean (Jean Jean’s great-great grandson) has infused his family’s winery with a fuller expression of its potential without altering the style of Couvent des Jacobins while keeping a healthy attitude towards respecting the past. It was a precious experience to taste Couvent des Jacobins wines dating back to 1947 and sharing a candlelit dinner together in the original bakery of the convent for the Jacobin Brothers. I wondered if the monks would have ever imagined that there would be people from all over the world sharing the wines from their vineyards. In a way, we were elevating what the monks started by discussing topics from all over the world, sharing different opinions, a multitude of experiences, and growing as human beings without allowing labels to hinder us, but we were profoundly respectful to the place, its history, and its meaning – there are still some practices that are continued even today which were originally started by the monks.

It was certainly exciting to learn of all the progressive winemaking projects that Couvent des Jacobins was employing but it made me beam with joy to know that the importance of keeping the convent a sacred place was still paramount. The best of both worlds can exist and they are evident in the current Couvent des Jacobins wines. 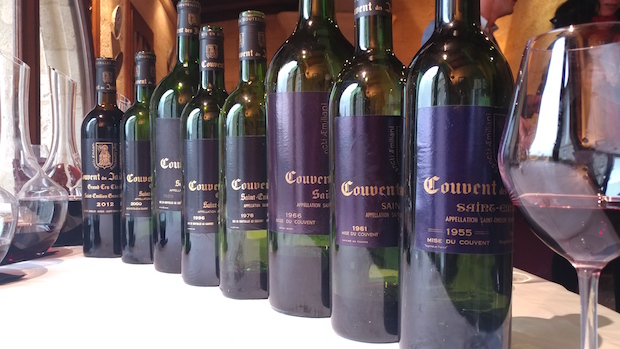 2017 Château Beaulieu Comtes de Tastes, Bordeaux Supérieur, Bordeaux, France ($14): This is not a Couvent des Jacobins wine but a Bordeaux Supérieur that I tasted in Bordeaux during a tasting of over 150 wines from the 2016 vintage. A value red Bordeaux wine that was giving rich black fruit and hints of complexity with tar and dusty earth. I still can’t believe the price.

The Couvent des Jacobins vineyards are planted with 85% Merlot, 11% Cabernet Franc, and 4% Petit Verdot. The Petit Verdot was used in the blend for the first time in their 2014 vintage and each year it varies in percentage of what it makes up in the final blend. 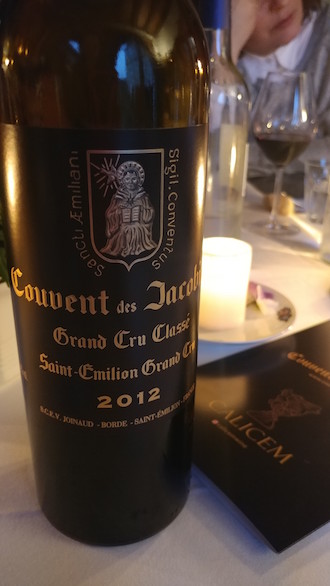 2012 Couvent des Jacobins, Grand Cru Classé, Saint–Émilion Grand Cru AOC, Bordeaux, France ($35): A beautiful sense of fruit expression with bright cherries with a hint of stony minerality and moderately firm structure that benefits from a couple of hours of decanting.

2016 Couvent des Jacobins, Grand Cru Classé, Saint–Émilion Grand Cru AOC, Bordeaux, France ($31): One of the unfortunate things about being a wine professional who tastes 100 to 200 wines during the same day is that often times you don’t have much time to give to those wines that are not on your list of favorites. I hate to admit it but it is true. So it was nice to take time with this wine during that 150+ tasting of 2016s because I knew I was going to visit this estate. It had good flesh on the body and was aromatically stunning with autumn leaves, raspberry sorbet and spice with shape and energy that lifted the wine on the long finish.

2017 Couvent des Jacobins, Grand Cru Classé, Saint–Émilion Grand Cru AOC, Bordeaux, France (Not Priced Yet But Look Out for En Primeur Price): 2017 was a tough year due to the frost in April, so they were only able to make around 700 to 800 cases of Couvent des Jacobins (typical production is 2000 to 2500 cases). We were able to try their 2017 Cabernet Franc without sulfur added and the same wine with sulfur added. Without knowing which wine was which, I really liked the fruit expression on the one without sulfur added. Well, the final blend of the 2017 was a gorgeous wine and I was shocked because it was a difficult vintage…but I always remind myself that difficult doesn’t necessarily mean bad – it just means they didn’t get to make that much. This wine had juicy fruit with velvety tannins without losing the precision or fresh acidity of their other vintages. So young and already incredibly delicious, I could see that although the winemaker Denis Pomarede was trying to stay quiet and let us make up our own minds, he had a big smile as we tasted it. I said to him, “You know this is really good, right?” He shyly nodded his head. Well, Couvent des Jacobins definitely deserves their hard work to start shining through. 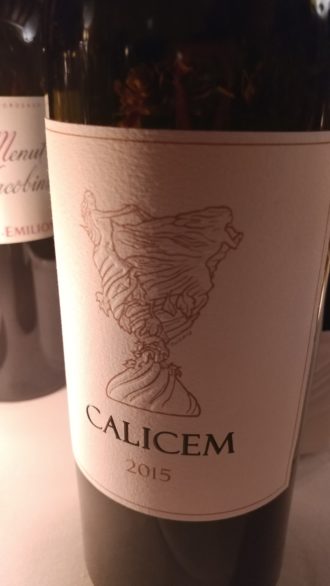 2015 Calicem, Saint–Émilion Grand Cru AOC, Bordeaux, France (Not Available in the US yet): 100% Merlot. “Calicem” means “Chalice” and pays homage to the history of Couvent des Jacobins. This is from an exceptional, tiny plot of Merlot that was planted in 1961 and has never seen herbicides. This wine was decadent with blueberry pie, black berry jam, wild flowers and a strong backbone of salinity that is distinctive to this plot. A knock out and this is their first vintage of releasing this isolated piece of terroir. Less than 250 cases are produced and they said it would retail for around 70 Euros, but if it makes it to the US it will probably cost more due to the extra cost for an importer/distributor to bring it in, but will still be a fanastic price for a micro-production Right Bank wine. The bottle’s back label has a few lines from the poem that Xavier Jean wrote that continues with the 2016 back label, skipping the 2017 which they did not make for this wine, and continuing for many years to come.

1955 Couvent des Jacobins, Saint–Émilion Grand Cru AOC, Bordeaux, France (Current Market Price Unknown):  It was a treat to taste a vertical of Couvent des Jacobins that went back to 1955, as well as having a surprise 1947 during dinner, but if I have to pick a favorite (and that is difficult) I would pick the 1955. I usually wouldn’t pick a wine with this much age, but it was still surprisingly fresh and nimble with notes of fresh blackberry, sweet tobacco, graphite and zingy acidity with an elegant finish wrapped up with fine tannins… it had none of the stewed fruits or meaty notes that one would expect at this stage.