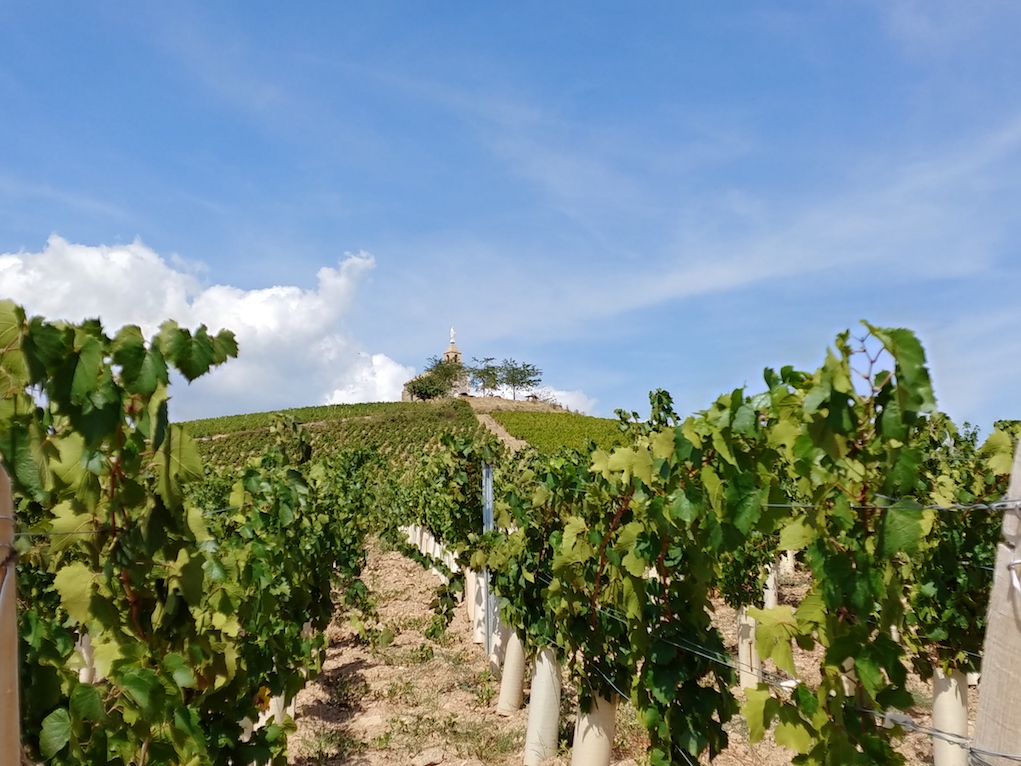 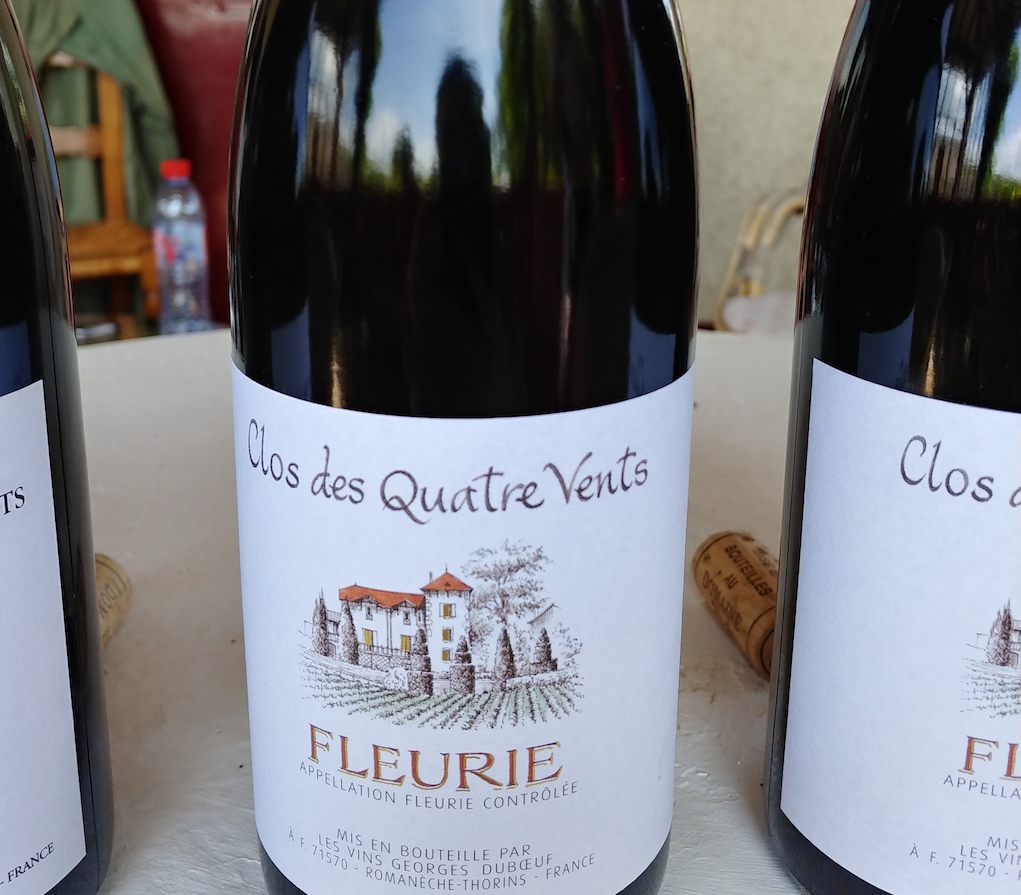 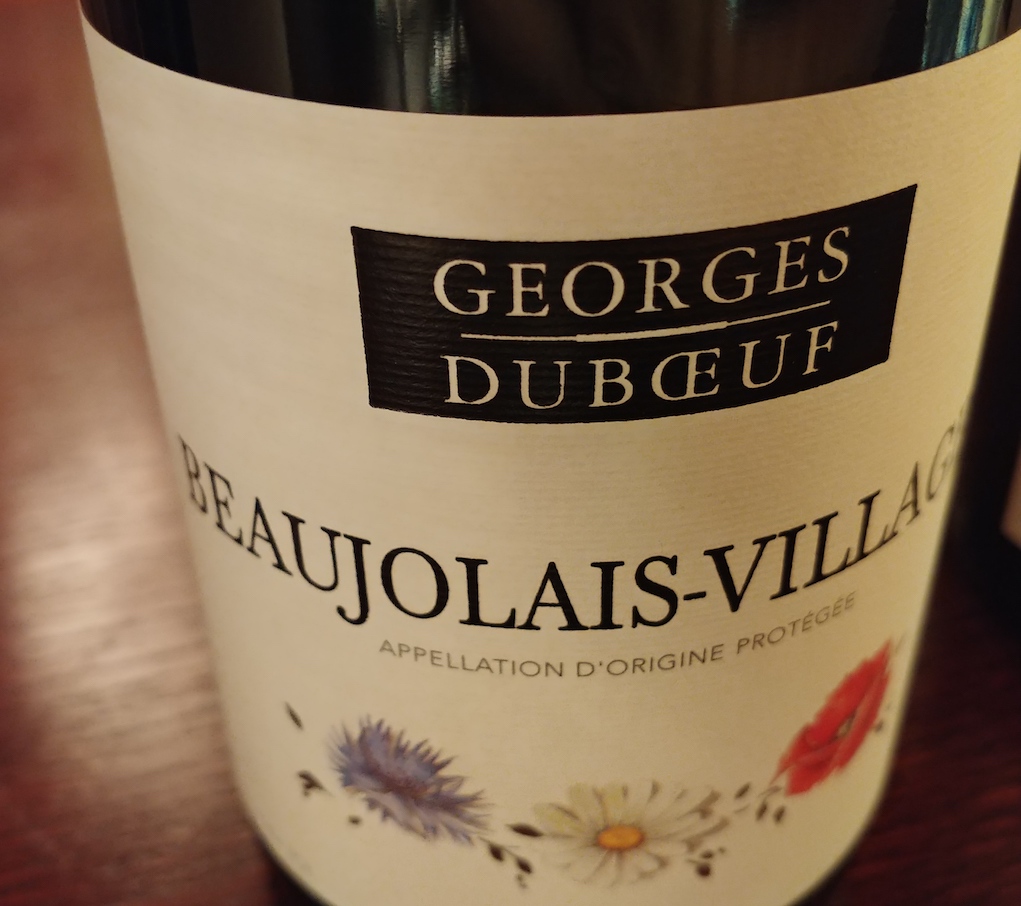 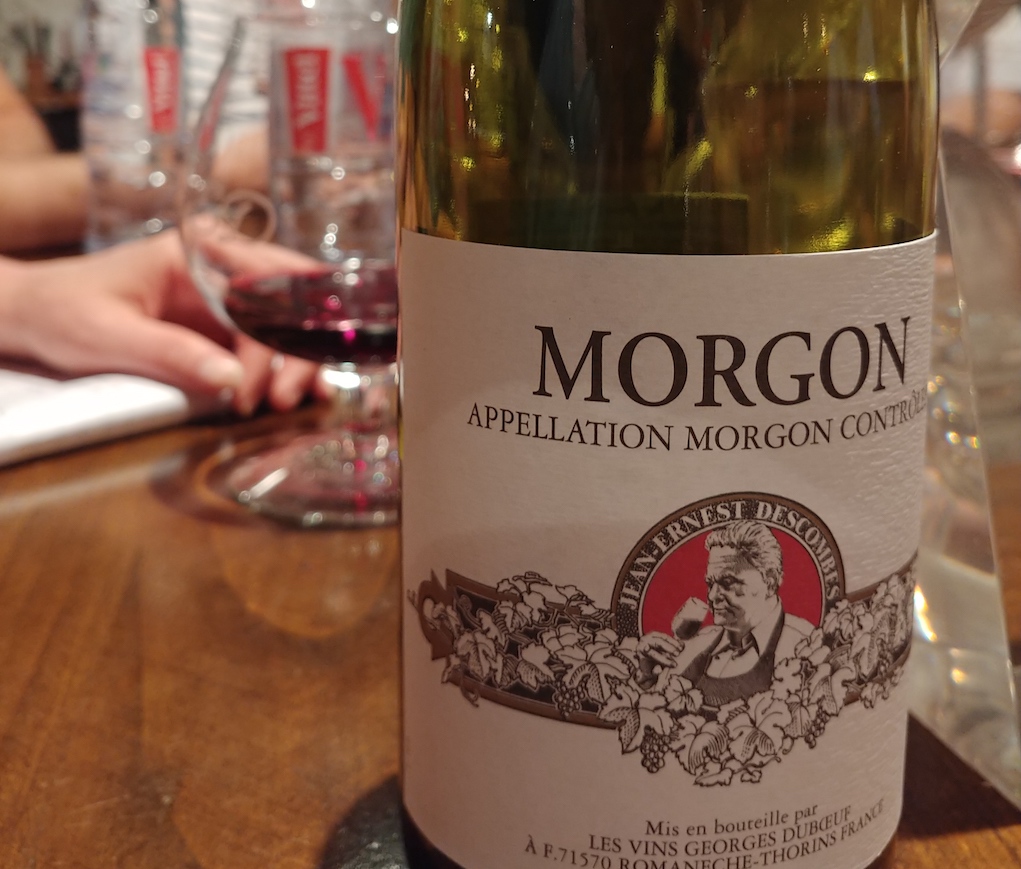 2017 Jean-Ernest Descombes Wine with Nicole Descombes in the Background 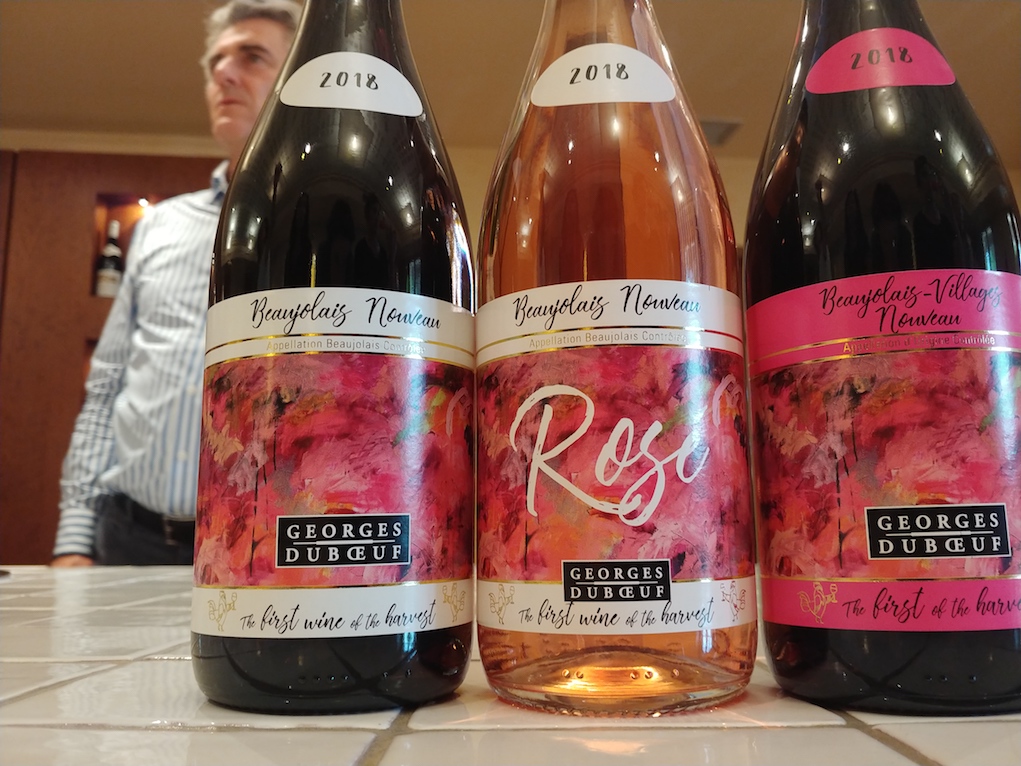 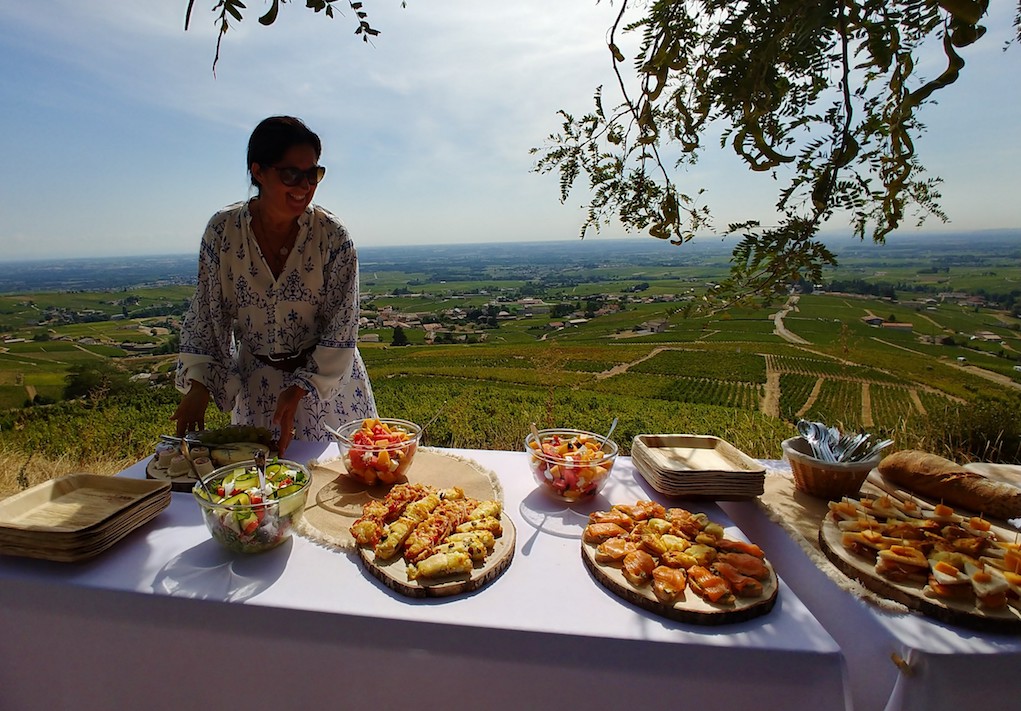 Anne Duboeuf Setting Up Our Picnic 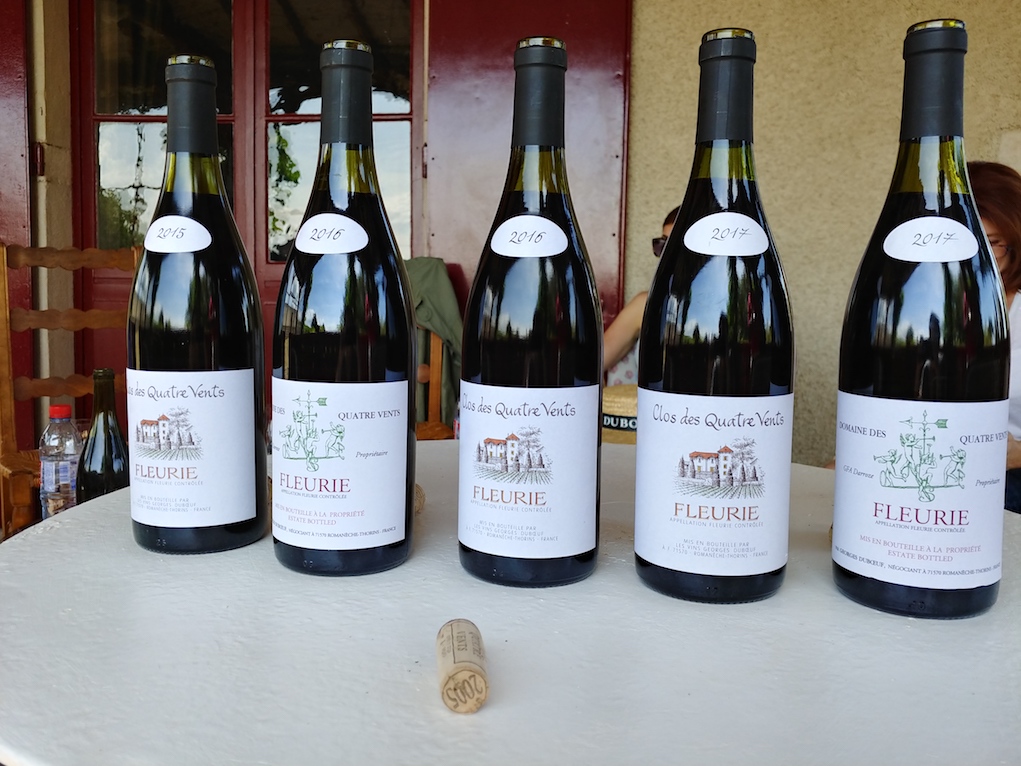 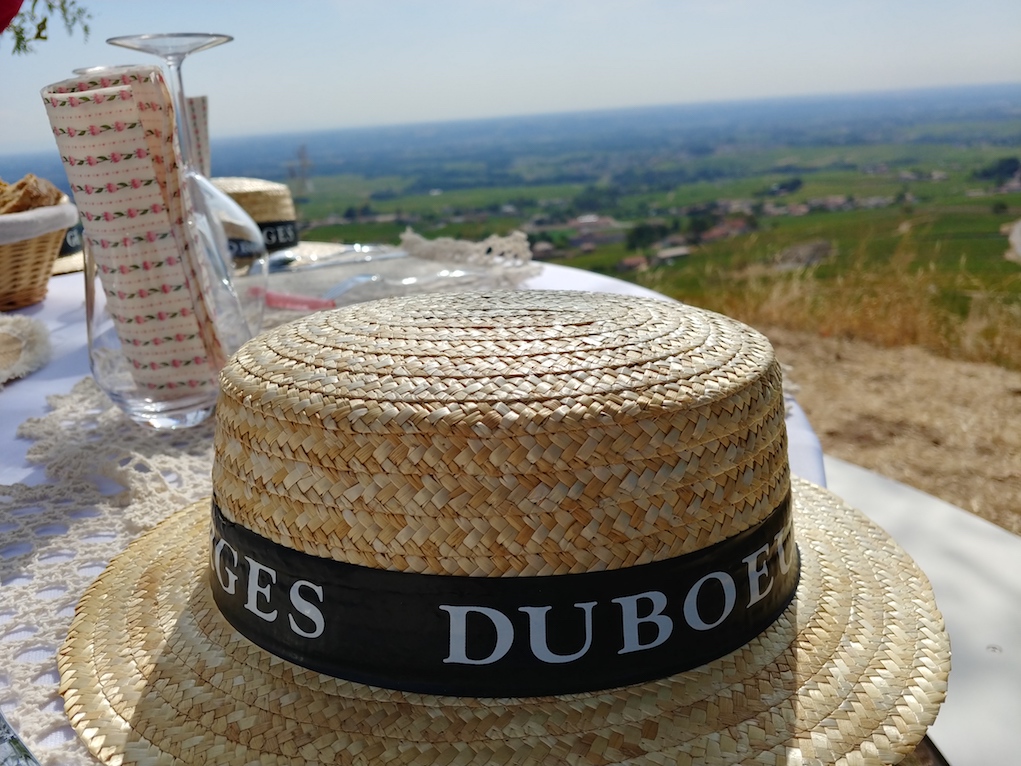 Our Picnic Overlooking the Fleurie Cru Vineyards in Beaujolais 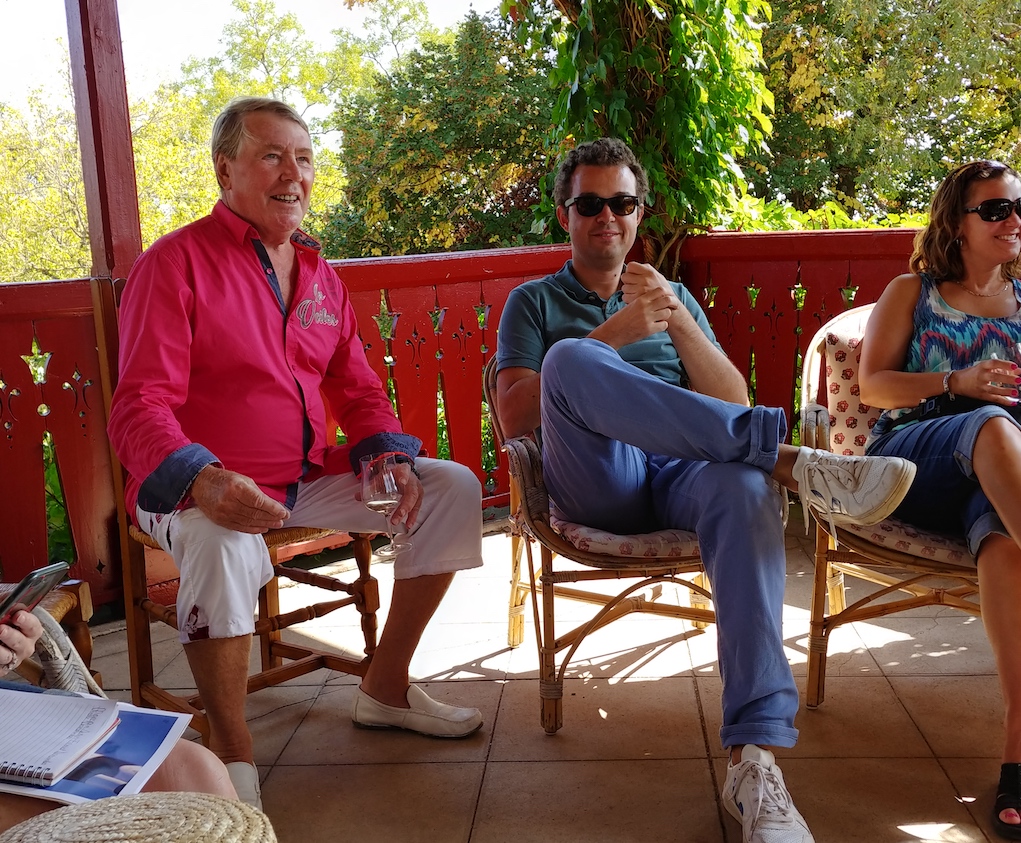 Patrick Darroze (left) Telling the Story of His Father's Passing 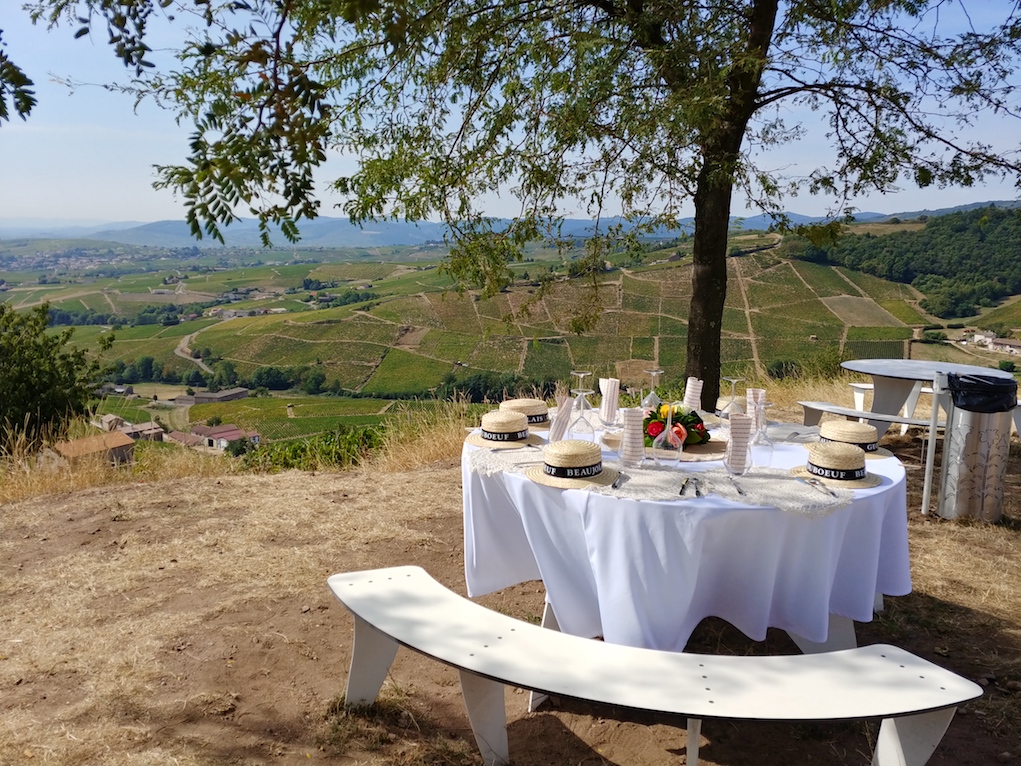 Picnic at the Top of La Madone de Fleurie 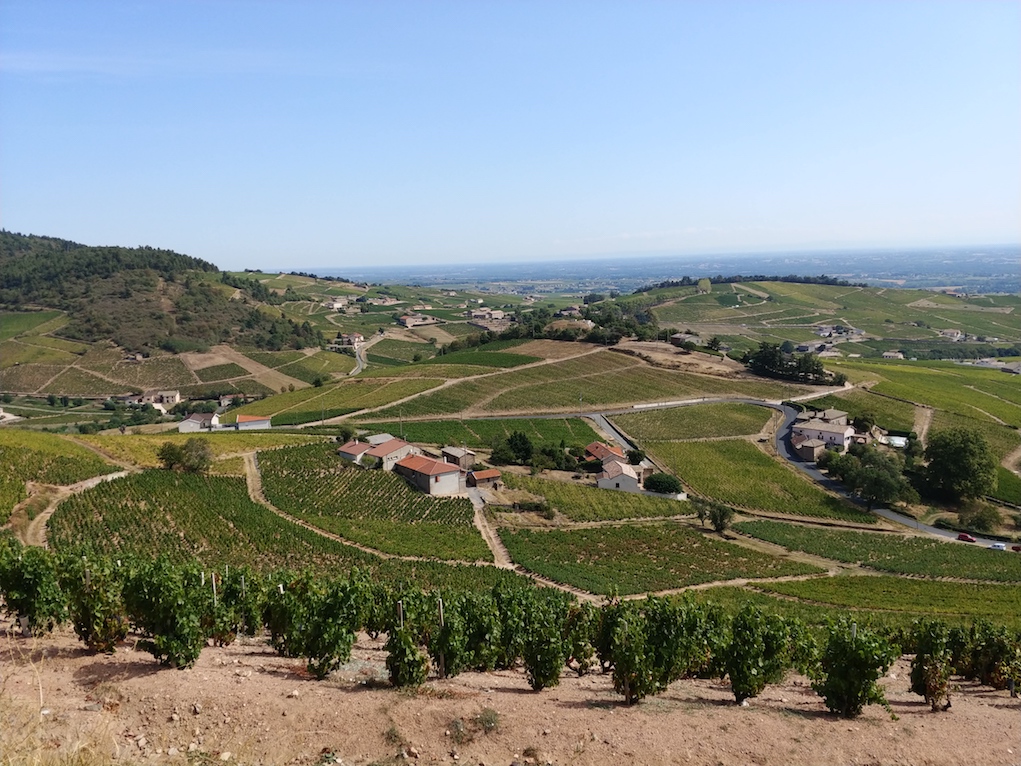 The Vineyards of Fleurie Cru in Beaujolais 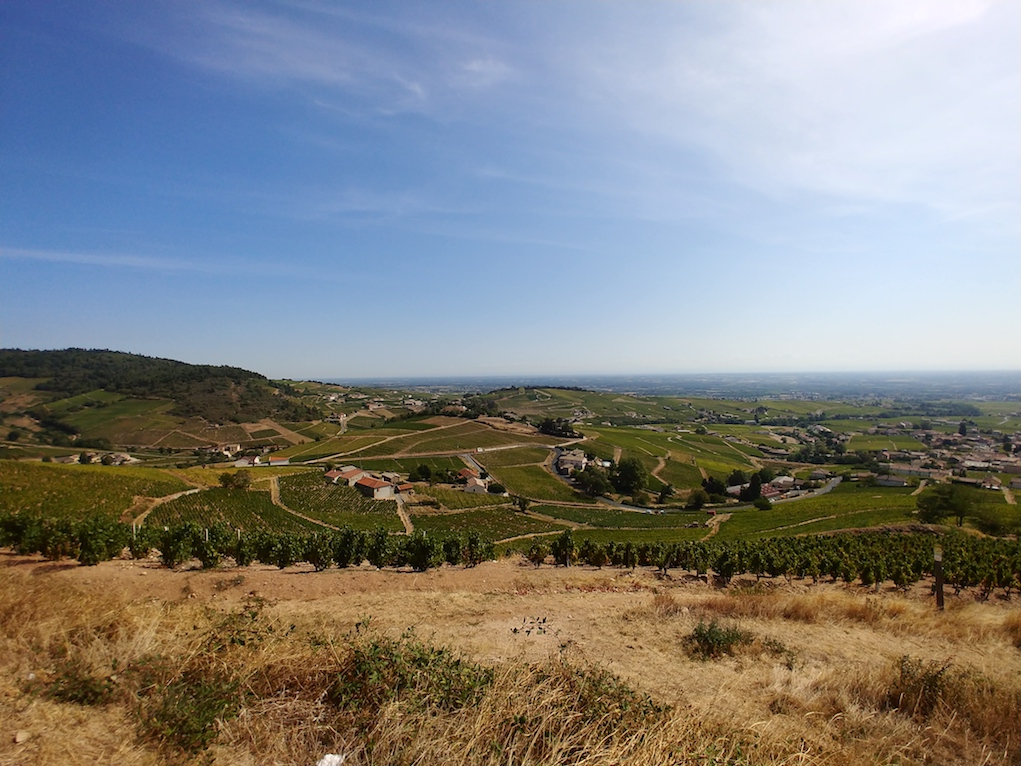 Vineyards of Fleurie Cru in Beaujolais

“Many think of Georges Duboeuf, from Beaujolais, France, as a marketing genius bringing the celebratory energy of Beaujolais Nouveau, as well as his “Flower” wines and other neighboring producers, to countries all over the world, yet his true genius is rooted in his deep relationships with the people of the area and his desire to share the spirit of this special wine region with the world.”

In the Wine Cellar There is Always a Soul

It was a beautiful sunny day as I enjoyed a delicious picnic lunch (that was lovingly made from scratch) near a sweet little chapel, La Madone de Fleurie, on top of a hill that overlooked the Fleurie Cru vineyards in Beaujolais, France. The conversations over lunch spanned from the atrocities of 9/11, as the anniversary was only 6 days away, to the interesting characters who have come and gone from the Fleurie community, and the recent passing of the matriarch of the Darroze family, who produces the wines from their family estates Domaine des Quatre Vents and Clos des Quatre Vents. Patrick Darroze talked about the recent loss of his mother, who credited living to past 100 years old by drinking Fleurie wine everyday, and how much she would have loved that spectacular lunch on the hilltop overlooking her home. 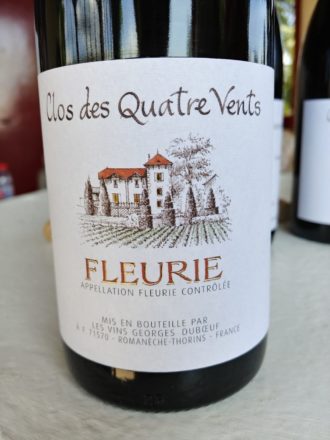 Domaine des Quatre Vents and Clos des Quatre Vents are the two labels that grace the bottles of the Darroze estate wines. The “Clos” are the vines that surround the family’s home and the vines were either planted in 1929 or 1945 – before and after WWII, while the Domaine label is made from vineyards more spread out throughout Fleurie. Also, the Domaine wines have been made using oak while the Clos have no oak. The wines were drastically different, showing the diversity that each vineyard plot displays in this area of Beaujolais known for its stunning aromatics and overall elegance.

After our lunch, we walked down the hill to the Domaine des Quatre Vents where Patrick Darroze showed us his winery and his family’s home, where everything was left just the way his mother had it. As I walked around, I saw the tea set that was placed in the way that Madame Darroze left it and even fresh flowers that she would have loved were arranged in a couple of the sitting rooms. Her spirit was still a powerful presence in that house.

As we tasted through the wines of Domaine des Quatre Vents (both the Domaine and Clos wines) Patrick talked about his family’s long relationship with Georges Duboeuf, starting with his father, Dr. Darroze, and Duboeuf’s gentleman’s agreement in 1967. Georges paid the Darroze family the highest price for their grapes and asked them to sell their grapes only to him (with the exception of their winemakers being able to keep a small amount for themselves) and Georges would reward their loyalty by making sure that they were paid the highest market price for the grapes for the appellation, year in and year out. A smile brightened Patrick’s face as he thought of all the times over the past 50 years when Georges would come over to the family house to talk about the price with his parents and how there was never a contract signed, but only the trust in the words of the people involved that had shared a long life of ups and downs together. 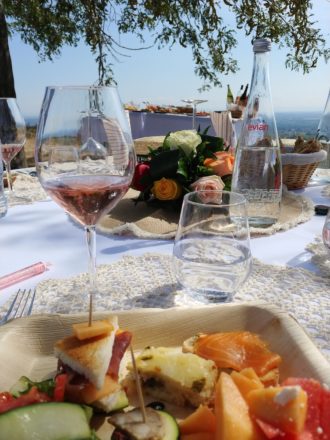 The day before my visit with Domaine des Quatre Vents, I was sitting with Georges Duboeuf himself, in his house, with his son Franck Duboeuf, as he turned on a large carousel that he kept in his dining room that filled the room with frivolity and fun, adding to the atmosphere when Georges painted a picture describing all the parties and good times he had with many who would come from all over the region to his home. It is funny how so many people in the wine industry see Georges first and foremost as a marketing genius (and don’t get me wrong, I know Georges is a brilliant man for many reasons) but when you sit and talk to him, it is the relationships he built and his beliefs in those growers around him that make him such an extraordinary person.

Another producer we visited was the winery of the legendary Jean-Ernest Descombes vintner. Jean-Ernest’s daughter, Nicole, hosted us in their cellars where Georges and her father once partied the night away. The Descombes family can trace their estate within their family tree since the French Revolution in 1789, with their oldest vines reaching over 80 years of age. Nicole’s father started selling their wine to Georges Duboeuf in 1968 and when her father passed away in 1993, Georges insisted on Jean-Ernest Descombes name and likeness gracing the labels of the wines. As the warmth of the candles in the room glowed against the photos of Nicole’s father and grandfather, I tasted a special wine that Nicole had traditionally decanted in front of us; it had aromas of forest floor, singed herbs and crumbly granite, with some brambly berries dancing in the background. She revealed that it was a 1993 – the last wine her father made. Nicole summed up that moment perfectly by saying, “In the cellar there is always a soul; it is a soul that dictates how the wine will be.” As I sat on the porch with Patrick Darroze, listening to him talk about how much his parents both meant to him and how much that family home and winery meant to him, I realized that although Patrick had an impressive career as a TV journalist and a news director of a regional TV station, everything that surrounded him in that moment was what really mattered to him. Patrick said that the 2015 was one of the best vintages for his winery and it reminded him of the outstanding 2005, bringing him back in time to when his father died in his arms. He had gone home when his father was ill and he went to his father’s room to bring him a glass of Port and to read him the paper as he held him close. He was excited to read to his “Papa” the headline that the 2005 Beaujolais was exceptional… and then in that moment he felt him go limp and his head slump into his chest and he was gone… Patrick said, “It was magic.”

Patrick then proceeded to pour us a 2005 from their cellar – there was no label so he didn’t know if it was the Domaine des Quatre Vents or Clos des Quatre Vents, and it really didn’t matter. It was an exceptional wine that carried the spirits of Patrick’s parents as well as the heart of Georges Duboeuf, a man that saved Beaujolais by helping his neighbors to bring their wines to the world without having to sell their souls. 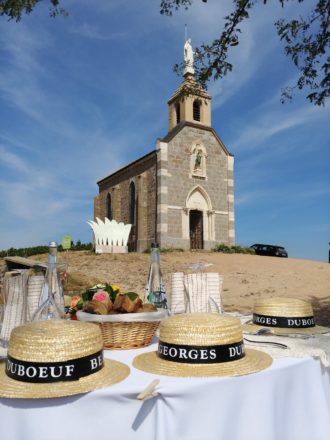 Picnic with La Madone de Fleurie in the Background.

2018 Georges Duboeuf, Beaujolais Nouveau, Beaujolais, France ($12): 100% Gamay. The 2018 vintage was just picked as I was visiting Beaujolais a little over a week ago so I didn’t get to taste it in its final stage, but 2018 is a great harvest and I did get to taste many grapes from various vineyards. I could tell that it is a vintage with rich concentration and layers of complexity. And there is thrilling news that Duboeuf will release a Beaujolais Nouveau Rosé this November as well. I’m surprised that they waited until now as it makes perfect sense; I’m excited to try it. It was fun to get a sneak peak at the labels for the 2018 that is the result of a contest that Duboeuf ran giving artists a chance to design their latest Nouveau label.

2017 Georges Duboeuf, Beaujolais-Villages, Beaujolais, France ($15): 100% Gamay. The Beaujolais-Villages takes its name from the 38 wine-making villages in the Beaujolais production area.  This 2017 had more structure than previous vintages and gave it an exciting linear shape. Red and black fruit were layered with baking spice and a fresh acidity.

2016 Clos des Quatre Vents, Fleurie Cru, Beaujolais, France ($23): 100% Gamay. Despite the 2015 vintage of this wine truly showing its extraordinary status, I was also taken by the more classic 2016 that was ideal to drink now, while one is waiting for the 2015 to age in the cellar. Pristine red cherries with hints of violets and freshly shaved cinnamon stick that had such a vivid expression along the sustained finish.

1993 Jean-Ernest Descombes, Morgon Cru, Beaujolais, France (price unknown): 100% Gamay. Morgon, as well as Moulin–à-Vent, are the two Beaujolais cru communes known for their longevity. Jean-Ernest Descombes is considered one of the great winemakers of the Morgon Cru. As mentioned above, this 1993 was the last vintage that Jean-Ernest made before he passed away. Today, his daughter Nicole runs the winery and it was a true privilege having her share this bottle with us. This wine had aromas of forest floor, singed herbs and crumbly granite with some brambly berries dancing in the background and it was still as bright as its maker, the legendary star Jean-Ernest Descombes.