On December 15 and 16 Treviso will host a Tiramisù World Cup with 100 contestants between the ages of 8 and 13. The godmother of this first-time competition will be Elisabetta Dami, who is the author of the Geronimo Stilton books. They are currently translated into 49 languages with more than 150 million copies sold

Everyone would almost certainly agree that Italy’s cuisine is regional not national.  The origins of its various dishes depend on who the regions’ rulers were before the Unification of Italy in 1870 and on their “KM. 0” ingredients.  For examples, Austria in Friuli Venezia Giulia, Alto Adige, the Veneto and Lombardy; France in Piedmont and Valle d’Aosta; and Spain, France, Greece, and “Arabia” in most of the south. Seafood is ubiquitous along Italy’s 7,600 km. of seacoast, cheese and meat in mountainous areas, and fresh fruit and vegetables ubiquitous punto e basta (and that’s that), but especially good in the center-south.

This same reasoning is also valid for desserts. Sicily is famous for its cannoli and granite, Campania for babà and sfogliatelle, bonet in Piedmont, sbrisolone in Lombardy, and budino di riso in Tuscany, to give a few examples. Nonetheless, it can safely be said that together with panettone and pandoro, tiramisù, found on the menus of most restaurants no matter in what region, is one of Italy’s few national desserts, although its origins are certainly northeastern and contested between Friuli Venezia Giulia and the Veneto. It’s also nicknamed “Mamma’s dessert” because no matter what the location everyone agrees “mia Mamma’s tiramisù” is always the best.

Numerous variations of tiramisù exist, but the original, traditional, classic recipe, cited here for four portions, contains a short list of ingredients: 20 savoiardi or ladyfingers, 3 eggs, 10 tablespoons of sugar, coffee, mascarpone cheese and cocoa powder. Here’s the recipe: 1) Make six espresso cups of coffee.  While it’s still hot, dissolve 2 teaspoons of sugar in the coffee. Then let it cool to room temperature. 2) Beat together the three egg yolks and sugar and mix in the mascarpone until it’s soft and creamy.  If you want the “cream” to be frothier, mix in the three egg whites after you’ve whipped them stiff. 3) Place ten ladyfingers at the center of a round plate and moisten them with some of the coffee, being careful not to drench them. 4) Spread half of your “cream” over the ladyfingers and then place the remaining ten lady- fingers in a row precisely on top of the others. Moisten the 20 ladyfingers with your remaining coffee.  5) Then spread the remaining half of your “cream” to cover the top layer of ladyfingers.  6) Shake the cocoa powder generously on top of the “cream”.  7) Refrigerate your tiramisù until you serve it. 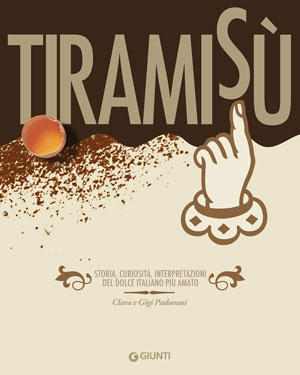 Unlike cannoli and babà, tiramisù doesn’t have a long history, although Wikipedia reports that in his book, L’Italia del caffè Francesco Soletti dates it to the 17th century in Siena in honor of the Grand Duke of Tuscany Cosimo III. “There is also evidence of a ‘Tiremesù’, semi-frozen dessert served by the Vetturino restaurant in Pieris, in Friuli Venezia Giulia [near Gorzia] since 1938” and in their controversial book, Tiramisù. Storia, curiosità interpretazioni del dolce italiano più amato (Giunti, 2016) food writers Clara and Gigi Padovani (Nick Squires reports in the British newspaper The Telegraph) claim that they “unearthed recipes from the 1950s which refer to a dessert called ‘tirime su’ and produced by a chef called Mario Cosolo in the village of San Canzian D’Isonzo in Friuli near the border with Slovenia. They also discovered a recipe for ‘tirimu su’ by Norma Pielli, which was being served at the restaurant “Roma” in the town of Tolmezzo, also in Friuli, near the Austrian border in 1959.”

In addition to tiramisù’s history the Padovani’s book includes 16 alternative recipes using ingredients from all over the world and 23 recipes by world-famous chefs including Albert Adrià, Josean Alija, Niko Romito and Iginio Massari. Since both Padovani are Piemontese and so might be regarded as impartial arbitrators, thanks to their research Italy’s Ministry of Agriculture and Food was able to insert tiramisù on July 29,2017 in the list of PAT or traditional agricultural food products, and attributed its authentic recipe to Friuli Venezia Giulia, believe it or not with two different recipes from the above-mentioned restaurants. This action so incensed Onorevole Luca Zaia, The Governor of the Veneto, that he vindicated Treviso’s paternity by winning official IGP (Indication of Geographical Protection) and DOP (Protected Designation of Origin) recognition from the same Ministry of Agriculture and Food. Moreover, with Francesco Redi and many local sponsors he was a mover-and-shaker behind establishing the Tiramisù World Cup in Treviso. Speaking of Francesco Redi, a native-son tourism guru with international experience, the founder and Managing Director of Twissen, a brand of The Independent Tourism Company, lecturer and author, he had the idea of the Tiramisù World Cup several years ago. “Wherever I went,” he told me, “everyone assured me that his or her mother’s tiramisu was the best in the world, but no one knew its birthplace.  So I decided to start a competition between amateurs, no professional chefs are admitted, of who in fact made the world’s best tiramisù and to hold it in Treviso, my hometown, which I’m convinced is my favorite sweet’s birthplace.”

Speaking of Treviso, never the liveliest of towns, Carminatonio Iannaccone, a native of Avellino, self-proclaimed himself to The Washington Post the inventor of tiramisù while working as a waiter and pastry chef in Treviso during the 1970s before moving to Baltimore.  There he opened “Piedigrotta Bakery” on the outskirts of Little Italy at 1300 Bank Street and sold it at age 70 in 2016. Nonetheless, most accounts of tiramisù’s origins date its “invention” to the 1960s and to Treviso.  In her book “Lidia’s Italy: Simple and Delicious Recipes from the Ten Places Lidia Loves Most, world-famous chef and writer Lidia Bastianich recounts that her friend Celeste Tonon, chef/owner of “Ristorante Da Celeste” told her that his mentor Speranza Garatti was “the true mother of tiramisu”. Most others agree instead that Roberto “Loly” Linguanotto, the cook/pastry chef at then Alba and Ado Campeol’s (friends of Garatti) restaurant “Le Beccherie”, Piazza Ancilotto 9, was the “true father of tiramisù.” It seems that Alba, who was pregnant with her son Carlo, now the owner of “Le Beccherie”, had cravings for something sweet that would give her an energy boost. Today Linguanotto is one of the jurors at the Tiramisù World Cup, established in 2017 and held in Treviso in November. The first year’s winner, chosen from over 720 contestants from all over the world: Canada, South America, China, Indonesia, Australia, Austria, Croatia’s France, Spain, Germany and Morocco, was 28-year-old Andrea Ciccolella, a factory worker at Luxottica, the eyeglass manufacturer, from Feltre in the province of Belluno. Ciccolella’s pipe dream is to become a pastry chef and own his own shop. This year’s winners out of some 600 contestants were Diletta Scandiuzzi, a 34-year-old opera singer from Treviso, for the traditional recipe, while the creative recipe category was won by Francesca Piovesana, a 44-year-old physiotherapist and mother-of-three from Casier, a town near Treviso, who added ginger and cinnamon to the traditional tiramisù recipe. On December 15 and 16 Treviso will host a Tiramisù World Cup with 100 contestants between the ages of 8 and 13. The godmother of this first-time competition will be Elisabetta Dami, who is the author of the Geronimo Stilton books.  They are currently translated into 49 languages with more than 150 million copies sold. The dates of the 2019 Tiramisù World Cups are still undecided.

Although certainly a cousin of zuppa inglese, zaibone, la bavarese lombarda, and trifle and invented as an energy-giving treat (because of the sugar and coffee and hence it nickname “Pick-me-up”) for sick children, pregnant or post-partum women, the elderly as well as prostitutes and their clients (so as to return home in unsuspicious condition) in Italian brothels before they were closed in 1958, recipes for “tiramisù” were unknown in cookbooks before the 1960s. According to Wikipedia, “The Italian-language dictionary Sabatini Coletti traces the first printed mention of the word to 1980, while Merriam-Webster’s Online Dictionary gives 1982 as the first mention of the dessert.” Nota bene: because it’s given to children and the elderly, its traditional recipe contains no alcohol and before the 1960s its ancestor was known as “sbatudin” in local dialect. Today the word tiramisù appears in the dictionaries of 23 different languages and in Europe is the fifth most commonly known Italian word after pizza, spaghetti, espresso, and mozzarella.

On Tuesdays when Le Beccherie is closed, enjoy tiramisù at Treviso’s Pasticceria Nascimben in the tiny Piazza dei Signori or Café da Bepi on Via Galletti. Elsewhere, on the internet Rome is voted the second best tiramisù destination. According to Eatingeurope.com, the best places to eat tiramisù in the Eternal City are: “Barberini Caffetteria e Pasticceria”, Via Marmorata 43 in Testaccio; “Da Enzo”, Via dei Vascellari 29 in Trastevere; “Flavio di Velavevodetto”, Via di Monte Testaccio 97 in Testaccio; “Zum”, Piazza del Teatro di Pompeo 20 near Campo de’ Fiori; “Luzzi”, Via San Giovanni in Laterano 88, near the Basilica; “Pompi”, Via Albalonga 7b/9/11; and “Mr. 100 Tiramisù”, Via dei Sediari 11/12 near Piazza Navona.  Also unforgettable is Heinz Beck’s (3 Michelin stars since 2006) served at Attimi in Terminal 3 at Rome’s Leonardo Da Vinci airport and at his recently inaugurated restaurant of the same name in Milan. Not to omit the one created by Executive Chef Francesco Apreda at the joint-gala evening for the 125th anniversary of Rome’s deluxe Hotel Hassler and the 40th anniversary Roberto Wirth as its owner and Managing Director. Treviso is also the birthplace of another world record, also indirectly connected to food: In the refectory of the Chapterhouse of the Dominican church of St. Nicholas, the largest church in Treviso, is a fresco painted in 1352 by Thomas of Modena showing the first example of eyeglasses in a work-of-art. To learn more about the sights, excursions, and hotels in and around Treviso as well as the Cup’s rules and regulations click on the Tiramisù World Cup website. Let’s hope that, after reading this article, contestants for 2019’s Tiramisù’s World Cup apply from North America.