The characters we met along the way, the ruinous state of the properties we saw, and the leap of faith needed to envision our dream were eye openers for us...

The summer of 2005 my husband Jesse and I began to look for a house to buy in Le Marche.  We had researched some real estate agents on line before leaving for the second vacation at our now favorite agriturismo in a tiny town midway between Ancona and Ascoli Piceno.  Our first meeting was with an agent named Gildo who swaggered out to meet us dressed in a bright yellow track suit, wrap around sunglasses that covered a good portion of his face and sleek Italian loafers.  He drove to the first house so fast in his Mercedes sports sedan, we had trouble keeping up with him in our oversized Ford C Max rental car.  Plus we didn’t know these country roads so well and they were a little terrifying with sharp, steep 180 degree turns.

Initially we thought we wanted a renovated house.  We’d read so many horror stories of restoring houses in Italy and knew we’d have to undergo construction while we were in the States.  We really feared the whole idea of a major restoration– afraid we’d get ripped off or that things wouldn’t get done the way we wanted.  But after we saw the first few restored properties with Gildo, we realized that if we didn’t like the way the house had been renovated, we would have to re-do things anyway, thereby making the extra price for an already restored house not worth it.

So we changed our spec’s and next met with the lovely Olivia Borodini, who had a well developed website and a much classier game.  Olivia had blond hair and big blue eyes– she looked like a Northern beauty, though I think she grew up in Marche.  Her entire life was one giant, tasteful accessory– her SUV, her Jackie O. sunglasses, her outfit, her shoes, her office, her pet, and her perfectly architect-renovated little house with pool and pool house.  Which she shows us, by the way, to convince us that a ruin can turn into something quite spectacular– it’s normale around there, and we shouldn’t be intimidated by the idea.

We saw a number of houses with Olivia.  None were quite right.  They were oddly renovated or configured; too close to the road; had badly placed exterior walls retaining the land and blocking the view; too much of a ruin for our imaginations to make the leap and see the potential.  Ultimately she lost patience with us and passed us on to the silver-haired, soft-spoken, patrician Silvio, a local pensionato, who drove us far and wide to see crumbling country houses in distant towns.  I documented the whole experience in an effort to remember what we’d seen and what we liked. 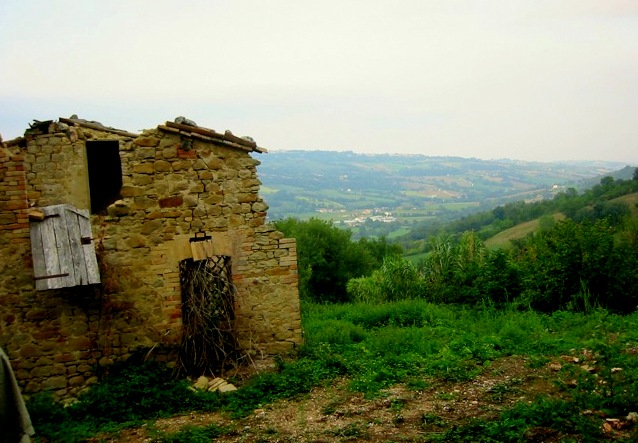 I have pictures of me and our daughter Sophie trudging through hay in what one day might be a kitchen; through a thorny, plum-laden orchard too thick to even get near the house; ducking into little animal sheds where some lucky family could store the lawn furniture.  These were typical country farm houses with a barn-like space for the animals on the piano terra with short, high windows that couldn’t be kicked by a cow or donkey, low troughs along one side, dirt floors, an exterior stair leading to the main entrance on the primo piano, wooden ladders and rusted farm tools strewn about, no plumbing, heating or electricity.

In these old farmhouses, the living spaces were always above the animals’ room, so that heat rising from cows, horses and mules could help to warm the humans above.  Thick walls, small windows, multiple fireplaces– all of these houses were built basically the same– to stay cool in summer and warm in winter, to exist with nature and stave off the harsh elements.  We foreigners buying property were taking a hardscrabble way of life, now nearly obsolete, and turning it into a vacation.  Italians, it seems, had lost interest in this lifestyle long ago and moved on.  The traditions of living on and working the land were valued by a few, but not many that we met. The next agent on our list was a genial wild-man.  With unruly hair and a bushy beard, he wore industrial strength hiking sandals and cargo shorts over stocky legs.  He hurtled us around in an old Jeep that evidently had lost its suspension years ago.  He was a local geometra who seemed to know what houses were abandoned, but he had keys to none of them, nor information on price or who the current owner was.  We saw a few houses, some with no more than a hint of a foundation, all in interesting locations, most that we had to hike to through thick underbrush, none of which felt actually viable.

We came to understand that everyone around us seemed to know of some old house or property for sale.  The owner of the agriturismo wanted to show us a few properties adjacent to his land.  The guys at the bar, who knew pretty quickly that we Americans were looking for a house, all had suggestions.  Then there was the phantom agent– a guy we’d made contact with while in the States, who lived in London and listed properties in Le Marche.  He steered us to his “local rep”– a young woman geometra, who brought along her British friend Hannah to translate.   They showed us a really interesting house with labyrinthine rooms that we called Casa Pulito, just up the road from Hannah’s own house, now in the final stages of renovation.  Seeing the transformation of Hannah’s house convinced us that this whole rejuvenation of an old ruin was indeed possible and actually quite magical. By the end of our vacation, we’d narrowed things down to two possible options:  Casa Pulito of which we only knew that it was owned by a local Italian family and little else.  And another house on Contrada Flaminia, which was in the hands of Olivia Borodini and already had a restoration plan drawn up by her go-to architect, the stylish Roberto in his pressed blue jeans, starched white shirt and shades.  Our daughter Sophie, who was 7 at the time, remembers this vacation only for the stinging nettles, bats, and being unable to read Harry Potter during the endless drives in bouncing, unstable cars over unfinished roads.  Her little 7-year old mind did not grasp the concept that before moving in, we would renovate and furnish any of these dilapidated houses– she worried where she would sleep and put her things in this crazy scheme of her parents.  Ultimately when a year later we did settle on a house, she jumped on board and celebrated merrily with us.