Ph.D. candidate Stefano Morello, a student at CUNY's Graduate Center who is originally from Turin, brought this story to light when he started reconstructing the fascinating history of his great-grandmother, Salvatrice Nigido. She left Sicily for the Big Apple in 1913 and died a few years later, in 1920. 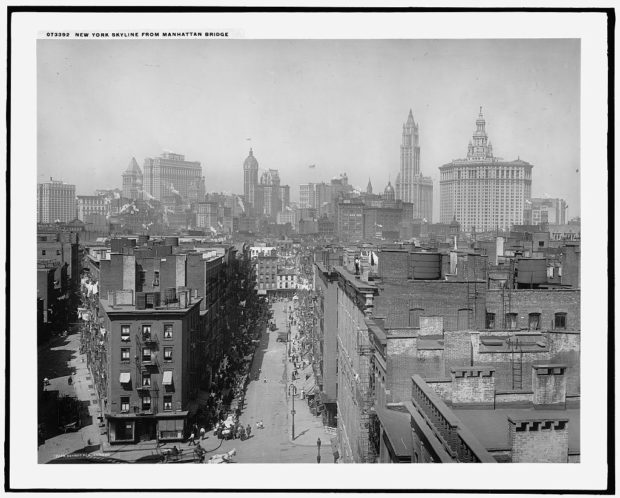 This story is about fake news and bad journalism, immigration, racism, and gentrification. It traces its roots back to the end of the XIX century and the first decades of the XX century — when millions of Italians were migrating to the United States of America trying to make their fortune. Ph.D. candidate Stefano Morello, a student at CUNY’s Graduate Center who is originally from Turin, brought it to light when he started reconstructing the fascinating history of his great-grandmother, Salvatrice Nigido. She left Sicily for the Big Apple in 1913 and died a few years later, in 1920.

Stefano welcomed me at the majestic NYC Department of Records and Information Services library, at 31 Chambers Street, Lower Manhattan. His 9-year long research has become an exhibition, which he also curated along with architectural historian Kerry Culhane. The setting of his thorough historical reconstruction is the so-called “Lung Block,” an area in the Lower East Side of Manhattan, New York, that used to be a lively enclave of Italian immigration. But that community was relatively short-lived. The U.S. press of the time portrayed it as a symbol of decay, a sinister den of tuberculosis, poverty and debauchery. Then, in 1933, the block attracted the interest of  ruthless real estate speculators and eventually it was erased from the map.

Those who are familiar with the current debate around immigration in Italy — with immigrants often accused of being plague-spreaders, morally depraved and prone to criminality — will easily find parallels between today’s stereotypes and those facing Italian immigrants decades ago. The Knickerbocker Village as it is today (Giulia Pozzi/VNY).

Few traces are left of the place that 90 years ago used to be the Lung Block — a neighborhood nestled between Monroe, Market, Cherry, and Catherine Street. In its place stands the Knickerbocker Village, a lower-middle-class housing complex consisting of 1,590 apartments spread over twelve brown-tile buildings of 13 floors each. Rising right between the Manhattan Bridge and the Brooklyn Bridge, the Knickerbocker Village stretches around two internal courtyards and is now part of Chinatown. The Knickerbocker Village, between Monroe and Market Street (Giulia Pozzi/VNY).

The St. James Catholic Church, which still serves a lively Irish community, is one of the rare remnants of bygone days. Not far from it, the Church of St. Joseph — plastered with signs written in Chinese — is an extension of the ancient Chapel of St. Rocco. The latter was, in turn, part of the St. Joachim Church, one of the first U.S. parishes to serve an Italian community. Apart from those relics, nothing in the neighborhood suggests its rich history. Nor is it possible to trace the descendants of the old Italian inhabitants, who ended up being scattered after real estate entrepreneur Fred French had the Lung Block’s tenements razed to the ground — to make room for the Knickerbocker Village. “The most difficult challenge for me was to be able to give voice to the main characters of this story. We did this by collecting passport photos, newspaper articles, records of births, deaths, and marriages,” Stefano told me. “Out of nearly 4,000 people, we have reconstructed the history of a dozen families”, he explained.

“Lung Block” was the disparaging label attached to the area by journalist Ernst Poole. In 1903, after graduating from Princeton and before turning into a renowned Pulitzer Prize author,  he wrote a pamphlet that exaggerated the difficult living conditions in the neighborhood. It was not the first publication of that kind; years before, journalist Jacob Riis, who was a member of the social reform movement, had already highlighted the hardships of that community — and not in a sympathetic way. Indeed, he had portrayed Italians as the most degraded of all European immigrants, characterizing them as not white, often illiterate, and “content to live in a pigsty.” Riis’s rhetoric was de-humanizing and riddled with prejudices. It often sensationalized the spread of infectious diseases, such as tuberculosis and typhus, to promote redevelopment projects. In so doing, he facilitated the erasure of the so-called Five Points, a low-income neighborhood that used to stretch between Mulberry Street and Little Water Street and was replaced by a park. Ernest Poole, The Plague in Its Stronghold, Tuberculosis in the New York Tenement, 1903.* Ernest Poole, The Plague in Its Stronghold, Tuberculosis in the New York Tenement, 1903.*

Arguably, Poole took a cue from Riis. He described the Lung Block’s inhabitants as abject, miserable and always drunk. He portrayed the block as an exotic den of tuberculosis, populated by monkeys and parrots — a threat not only to those who lived there but even to the rest of the city. To forge his narrative, he used old photographs of inspections made by the Tenement House Department two decades before — despite the fact that, in the meantime, the 1879, 1895, and 1901 New York Tenement House Laws had significantly improved the tenements’ conditions and the incidence of tuberculosis had plummeted.

Poole also relied on an imprecise mix of different data to describe a substantial increase in infections between 1894 and 1903, one that never occurred. Stefano Morello felt overwhelmed with shock when, a few months ago, a similar debate broke out in Turin regarding a complex of buildings inhabited by immigrant families; the press soon sounded the alarm over an alleged tuberculosis epidemic. “I am from that area,” Stefano told me. “While reading the news in those days, I found the very same rhetorical devices, the same sensationalism. A hundred years later, we have not learned anything,” he said.

The first petition to raze the Lung Block and build a park in its place came in 1903. The firm opposition of Father James Curry, a priest at the nearby St. James Roman Catholic Church thwarted it. Father Curry was supported by a local Council Member who was worried about losing a substantial electoral pool. But the anti-Lung Block propaganda continued unabated despite the fact that the Tenement House Department’s fourth report in 1908 declared the Lung Block “reclaimed.”

Not even the political and financial influence gained by a few Italian families — which led to a further improvement in housing conditions — could stop the process. Fred French, who was the real estate developer of Tudor City, had set his sights on the whole area stretching between the Brooklyn and the Manhattan bridges, which he saw as the perfect place to build a huge housing complex devised for Wall Street workers. The 1929 financial crisis eventually downsized the project, which benefited from the New Deal tax relief, limiting it to the Lung Block.

Tuberculosis maps of the Lung Block from the Annual Report of the Department of Health, 1908. Courtesy of the New York City Municipal Library.*

To achieve this goal, not only did French use front companies, but he also fueled the rhetoric that had been spreading for years. Among other things, he documented the allegedly shocking living conditions in the neighborhood with the help of conniving photographers. The aim was clear: to accommodate — he would later admit — middle-class people who were “wasting their time” commuting to work from the suburbs, and force “another class of people, who live there now, and who need not live there” to leave for good.

Although 373 Italian families had expressed their intention to return to the Knickerbocker Village once completed, only three of them had the financial capacity to do so. The result was a scattered community that spilled into other neighborhoods in New York, New Jersey, Pennsylvania — or some who just returned to Italy. Albert Rothschild, Destruction of the Lung Block, 1933. View toward downtown and Wall Street. St. Joseph’s Church stands at the right of the frame with the Municipal Building beyond it. Courtesy of the Fred F. French Collection, Manuscripts and Archives Division, The New York Public Library. In this incredible intertwining of personal stories and historical trends, the experience of Stefano’s great-grandmother, Salvatrice Nigido, stands out. She came to New York from Militello, Sicily, to join her brother and her sisters-in-law, leaving her 5-year-old child, Stefano’s grandmother, in Italy. “Salvatrice was supposed to return to Italy after earning enough money, but she fell in love with Salvatore Plescente, the one who, we could say, started the migratory flow from Militello,” Stefano explained. After seven years spent working as a seamstress in her apartment at 47 Market Street, it was not tuberculosis, but influenza that took her life. “My grandmother never made it to America. She was supposed to be reunited with her mother in 1920, but Salvatrice died before her daughter could leave,” Stefano said.

This story remained largely unknown until 2013, when the Italian Ph.D. candidate, who is the only member of his family who speaks English, started connecting the dots. In so doing, not only did he shed light on the history of his own family, but he also turned the spotlight on the vicissitudes of one of the many Italian communities in the New World that suffered from racism, discrimination, prejudices and gentrification — and was eventually wiped out by them.