In the 1970’s my Dad had offices in the Flatiron Bldg. The views from his 10th floor windows overlooked acres of open parking lots that surrounded 23rd Street. For those who have spent time in the Flatiron district recently, you will understand the enormous change of ‘scenery’ since then. The building sits in an area where one of the highlights lies in the middle of Union Square: the Union Market.

Now that you’ve had a chance to digest a few fragments of my (luminous) past; namely a (white) Upper East sider with deep roots in (pre-Hassidic) Boro Park, and a bit of DNA in (pre -roaring) Harlem, it would be fair to say, I have an unusual ethnic blend ! There’s more….. although little to do with ethnicity more with location. 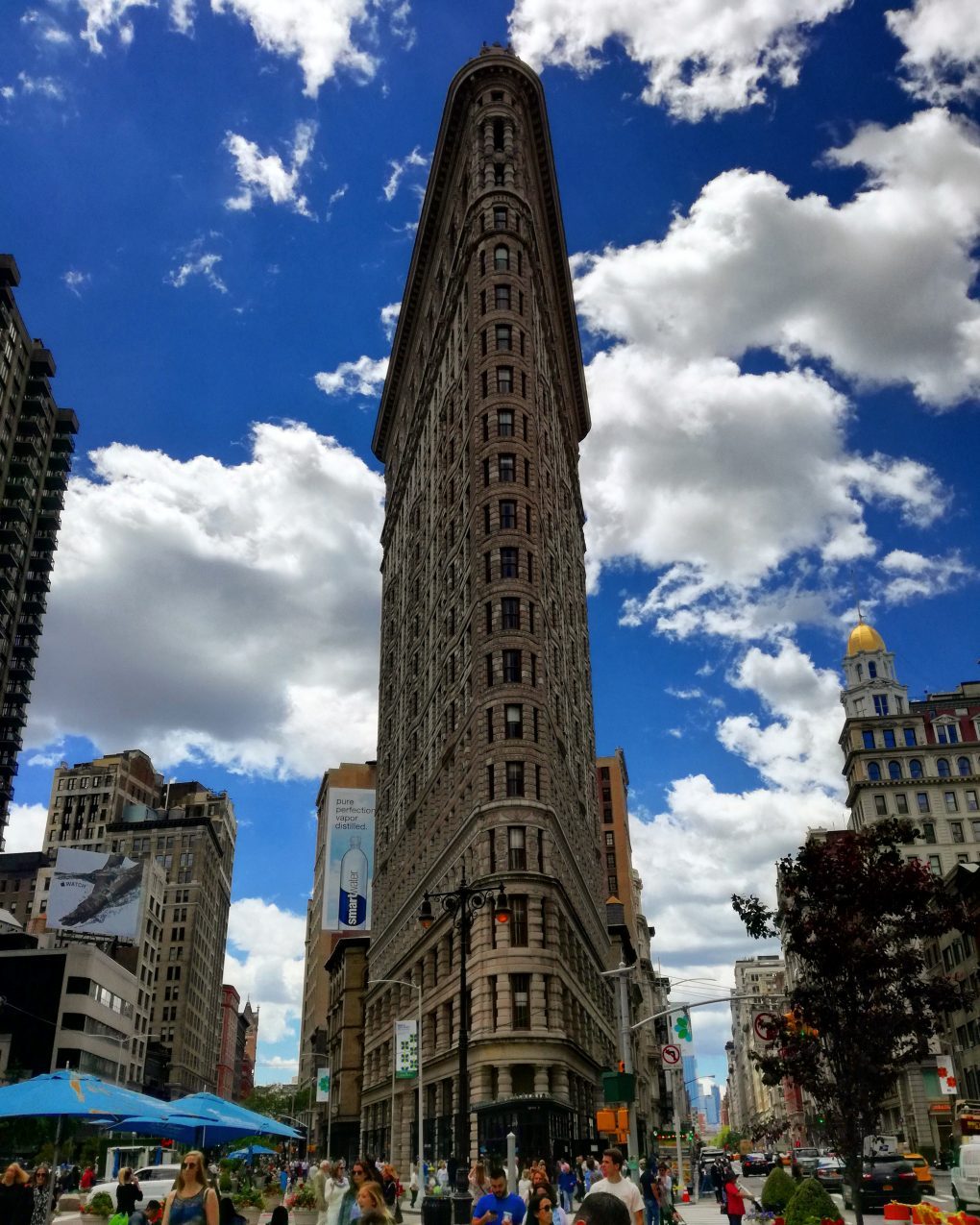 In the 1970’s my Dad had offices in the Flatiron Bldg. The views from his 10th floor windows overlooked acres of open parking lots that surrounded 23rd Street.  For those who have spent time in the Flatiron district recently, you will understand the enormous change of ‘scenery’ since then. Open lots for parking are no longer part of the city landscape.  Many of these lots were bought out by developers and converted into high rise office buildings, residential lofts & apartments.  The only remaining remnant of familiarity is Eisenbergs Sandwich Shop on Fifth / 22nd St, serving NY staples such as egg creams and (virgin) lime- rickeys, since opening its doors in 1929.

The Flatiron Building was designed by Chicago architect Daniel Burnham in 1902 as a vertical Renaissance Palazzo with Beaux-Arts styling. Like a classical Greek column, its façade is divided into a base, shaft & capital.  Building the Flatiron was made feasible by a change to NYC building codes, eliminating the requirement that masonry be used for fireproofing & opening the way for steel- skeleton construction. It remains one of the worlds most iconic skyscrapers and a quintessential NYC symbol.  The Flatiron Building was designated a NYC landmark in 1966, added to the National Register of Historic Places in 1979 and designated a National Historic Landmark in 1989.  The building sits at the intersection of Fifth Avenue, Broadway and 23rd Street creating the iconic shape, harmonious with the buildings design.

This particular area covers a radius spanning from E. 14th to E. 30th Street, and from Fifth to 6th Avenue. One of the highlights and most recognized in this downtown triangle, lies in the middle of Union Square. An open air market servicing New Yorkers from all over the city, selling produce from farm to stand.  Vendors arriving before dawn with truckloads of organic greens/ cheeses / fowl / flowers/ fruits / breads / jams & more, create an atmosphere similar to those found in European markets. Women in straw hats carrying baskets overflowing w. fresh flowers, is a site, I would imagine, any of the impressionists would have enjoyed capturing. Union Square Market caters to a variety of serious foodies seeking the freshest produce as well as those simply looking for a delicious salad for dinner. I’ve spotted several ‘celebrity’ chefs early in the morning, canvasing for their menus daily fare. In the years since I developed a film location division, I’ve had the unique opportunity to view some of the city’s most extraordinary homes. Many of the decisions made before posting these locations, is based on size, and approval from condo/ coop boards, receptive to filming in their building. At the same time, owners are fully prepared for the massive invasion that could potentially take place.

Similar to those on the front line !

I have often admired the flexibility & spirit that these people possess;   not to mention their inner strength.  An example of perseverance, tenacity, and a willingness to host these large crews, are 2 prominent NYC clients.   He a former front runner in the mayoral campaign, and she a public relations exec. When family rearing roles were satisfied, they made the decision to alter their lifestyle.  For most New Yorkers, changing zip codes has the same impact as decisions involving bi-coastal moves.  We tend to become loyal and somewhat territorial to our ‘hood, placing these type of options in a highly charged emotional context. It defies a reasonable explanation. Suffice to say, a decision to move from the structured confines of the Upper East Side to the Flatiron district, would fall under this category. After 20 years on 90th St & East End Avenue, a migration to downtown Manhattan seemed a positive change.  The staid composure of family life in a 2700 sf apartment, was no longer mandatory with two grown children having left the nest.   The decision to broaden their base and explore the options that downtown living offered, became intriguing. When they first viewed the loft in the heart of Union Square (aka Flatiron), the comment made by both was an enthusiastic ‘wow’ ! to quote my client, ‘the last time I had this reaction was when I met my wife, 35 years before’ . Perhaps dramatic, comparing ‘love at first sight’ would be apropos for many experiencing heart palpitations when viewing New York City real estate.

The cultural shift and diversity that the Flatiron area offered as well as easy access to public transportation were just a few of the ‘plus’ factors.   A wide variety of ethnic & iconic restaurants, public theatre, art movie houses, shopping – one of the city’s most revered home décor stores, were additional confirmations.

All signs were leading ‘south’.

Still involved in a continuous contribution to public life including politics, communications, media & law, they both were enjoying a full life.  As well as a mutual love for a large variety of the city’s cultural offerings. But their decision to move downtown now ranks highest on this shared list, with a special pride in their 3700 sf loft. The selling point was its glass enclosed interior library, housing floor to ceiling volumes of books. A stunning choice, as well as one of my most requested film locations.

As for the additional 1000 sf of space inherited with this move, they would both agree, it’s created a play area for their 2 newest ‘guests’… a granddaughter & grandson, who have become frequent loft visitors.