As a collective community, with many shared experiences, do we, Italian/Americans, need a unifying myth? During this historical moment, of deep alienation and ethnic insecurity, the answer seems to be – yes! All myths are artificial creations of the human imagination. But, they serve a purpose, and we should, together, construct a meta-mythology of Italiana/Americana.

To no surprise, as September bleed into October, the Italian/American intelligentsia began their annual clash over Columbus. There are dozens of articles, written by qualified scholars, explaining why the holiday needs to be abolished and why the explorer’s statues ought to be toppled. This essay will be working from an a priori position against Columbus. There are already enough think pieces on why he needs to go. Instead, what this work hopes to do is ignite a new conversation, on what to do next and how to do it. As a collective community, with many shared experiences, do we, Italian/Americans, need a unifying myth? During this historical moment, of deep alienation and ethnic insecurity, the answer seems to be – yes! All myths are artificial creations of the human imagination. But, they serve a purpose, and we should, together, construct a meta-mythology of Italiana/Americana.

This piece will be working within the confines of some methodologies and concepts. Firstly, though he is problematic in other areas, Joseph Campbell’s functions of myths, is useful in explaining how myths function. Secondly, we need to find a method for constructing a new myth. For that purpose, metamoderenism is appropriate. Thirdly, this needs to be guided by a fusion, and reinterpretation, of home grown Italian praxises: Errico Malatesta’s vanguard and Antonio Gramsci’s organic intellectual. This is by no means a finalized product, or masterly crafted formula. It is a start. At most, it is a rough guide for dismantling the old myth with suggestions for building a new one. There is always room for improvement and evolution.

Joseph Campbell argues myths serve four functions. How can these four functions be contextualized within Italiana/Americana? Campbell asserts the first function of myth is mystical: “realizing what a wonder the universe is, and what a wonder you are, and experiencing awe before this mystery.” Basically, this is claiming “I am an Italian, Italian/American, etc.,” a making sense of your being. The second function is cosmological: “the dimension with which science is concerned – showing you what shape the universe is, but showing it in such a way that the mystery again comes through.” This is grasping – though limitedly – being Italian/American and how that interacts, intersects, and is shaped by this world; a pseudo grand scheme of Italianità – Italianess. The third function is sociological: “supporting and validating a certain social order…. It is the sociological function of myth that has taken over in our world – and it is out of date.” This, in its most raw sense, is dated. However, it can be turned upon its head, and become reorganized into how Italian/American’s perform their ethnicity intra-communally: Sunday dinner, going to the feast, the family canning tomatoes, nonna making the seven fishes during Christmas, etc. Finally, and most importantly, is the pedagogical function, Campbell argues: “this is the one that I think everyone must try today to relate to – and that is the pedagogical function, of how to live a human lifetime under any circumstances.” Essentially, how can we learn from our collective history, the mythos, of Italian/Americana – and where can we go from there? Issues such as gang culture, whiteness, politics, racism/prejudice, and immigration, are all woven together here. Simpatico with Campbell, this is the paramount part. The goal must be how to harness this Italiana/Americana meta-mythology for pedagogical purposes.

How do we go about forming this new mythology?  One possible method is metamodernism. In the simplest sense, it is a dialectical synthesis, oscillating between, and composed of – modernism and postmodernism: “the scientific-poetic synthesis and informed naivety of a magical realism…a pragmatic romanticism… the mercurial condition between and beyond irony and sincerity, naivety and knowingness, relativism and truth, optimism and doubt, in pursuit of a plurality of disparate and elusive horizons.” This is a yin-and-yang, the grand scheme of modernism and its positivity, but also of the postmodern cynical comprehension of artificialness – but while accepting it is creating a sense of purpose and a possibility of what can become; a well composed mission statement of sorts. A problem with much of contemporary intellectualism is how it is steeped deeply in a postmodern/post-structural mode. Some are comfortable with a nihilistic interpretation of the world. However, much of society and perhaps Italian/Americans especially, are not. Many derive their meaning through the myth of Columbus, the holiday, the performances, and its symbols. Through metamodernism we can absorb these two positions into each other: “Columbus (it’s the symbols, performance,  and holiday), gives us, Italian/Americans’, meaning” – fused with – “Columbus needs to be abolished, because he was horrible and irrelevant to Italian/Americans” – which creates – “a meta-mythology, that is not around Columbus, but is instead drawn from the contextualized examples in the previous paragraph on the purpose of myth, with a special focus on the pedagogical function.” 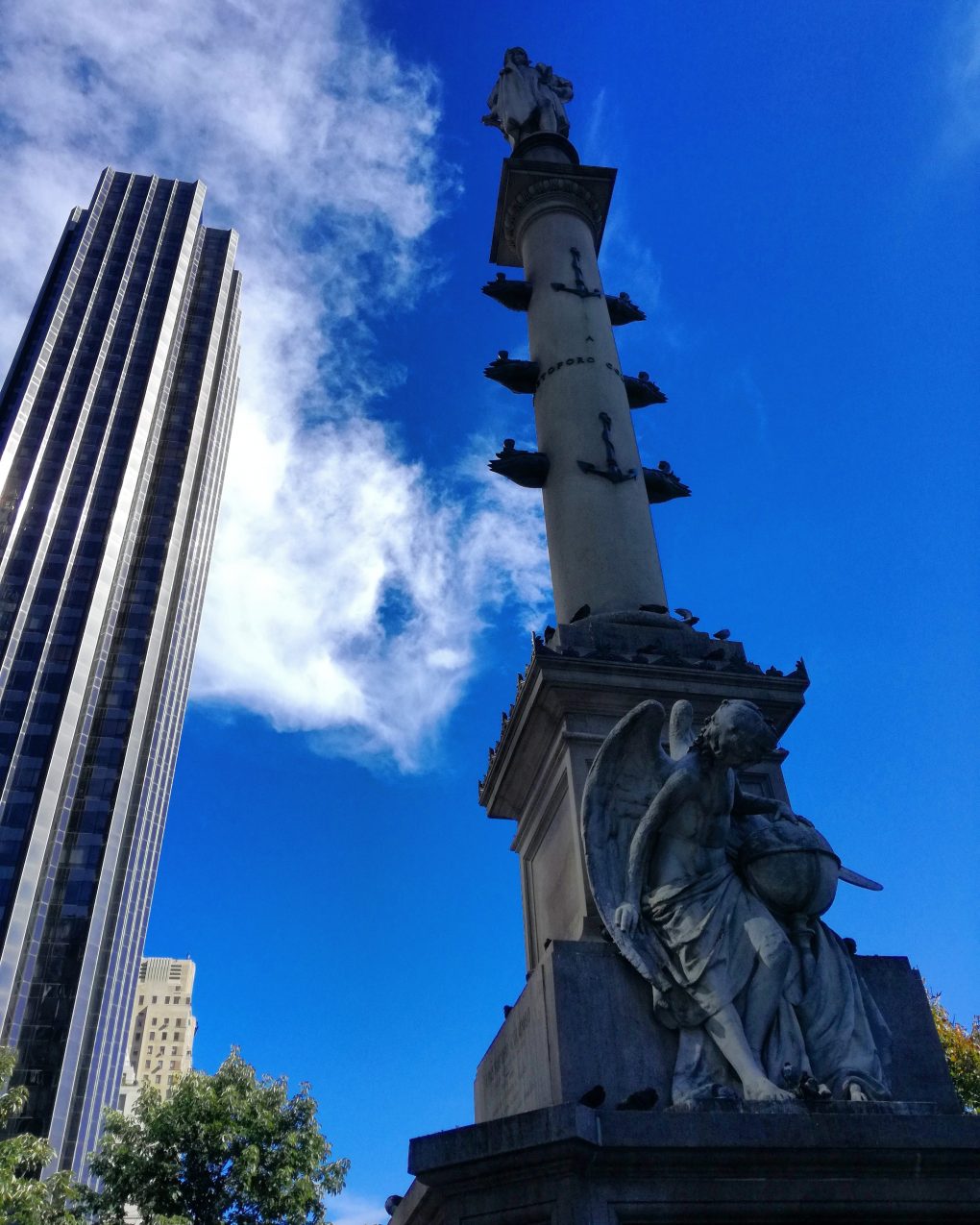 How do we implement this meta-mythology? The political geniuses, of our tradition, have laid out some foundational ideas. First is Malatesta’s vanguard. Simply it is a voluntary group, of members in the community, who get together, to guide the community towards a “great mission.”  Malatesta’s great mission was an anarchist society. We should re-appropriate this idea and structure into something cultural. In our case, the “great mission” has a short term goal of abolishing Columbus Day and a long term goal of creating a broad meta-mythology of Italiana/Americana. Since Malatesta was an anarchist, this concept of vanguard, will have no formal structure or hierarchies. It will be composed of members of the community, the organic intellectuals, and organizations of a like mind. The vanguard will have no official status, no leader. It is us working together.

Who are the organic intellectuals? For clarity, I will paraphrase Gramsci: they are members of the working class, not linked to traditional intellectuals, who grow out of their society naturally, who have the ability to express the ills of proletariat struggles, and most importantly have a duty to lead the party and people into creating a counter-hegemony to capitalism. We will also re-appropriate this into: members of the Italian/American community, who are skeptical of the current “leaders” of the community, who have the ability to express our collective concepts (linguists, gender-studies professors, historians, artist, etc.), and who have a duty to “guide” Italian/Americans into discarding Columbus and work towards a greater meta-mythology.

Italian/Americans, interrupt the attacks on Columbus, as attacks on themselves. The intelligentsia is failing at guiding the community to a new meaning. Where do we go from here? As the curators of the collective culture, it is their duty to direct and teach the community into being. The schema: vanguard of organic intellectuals creating a meta-mythology – can be a way to do it. Not everyone needs myths, if you don’t, moving on from Columbus will not be difficult, and please do. However many Italian/Americans, unconsciously, and perhaps from alienation and ethnic insecurity (topics for much more exhaustive works) need a myth. It gives them a story to draw from, lessons to learn, identifiers to relate to, and something inspiring. In order to do that replacing Columbus Day, with a general Italian/Americans day, could be a first step. Though an Indigenous Peoples’ Day should exist, replacing Columbus Day with it is throwing the baby out with the bathwater. The second Monday of October is synonymous with Italian/Americans. The cultural wealth of the community is worth celebrating and the stories of the many experiences are worth memorializing. From the ashes of hero-worship, many new potentials may arise for the Italian/American, and this meta-myth could provide them the tools.

Stephen J. Cerulli is a college assistant at the John D Calandra Italian American Institute - Queens College. He is currently studying Western Intellectual Traditions at The Graduate Center, CUNY. His interests are in: fascism/anti-fascism, libertarian-socialist/anarchist thought in Italy and the diaspora, and Italian/American studies. You can reach him at stevecerulli@yahoo.com.