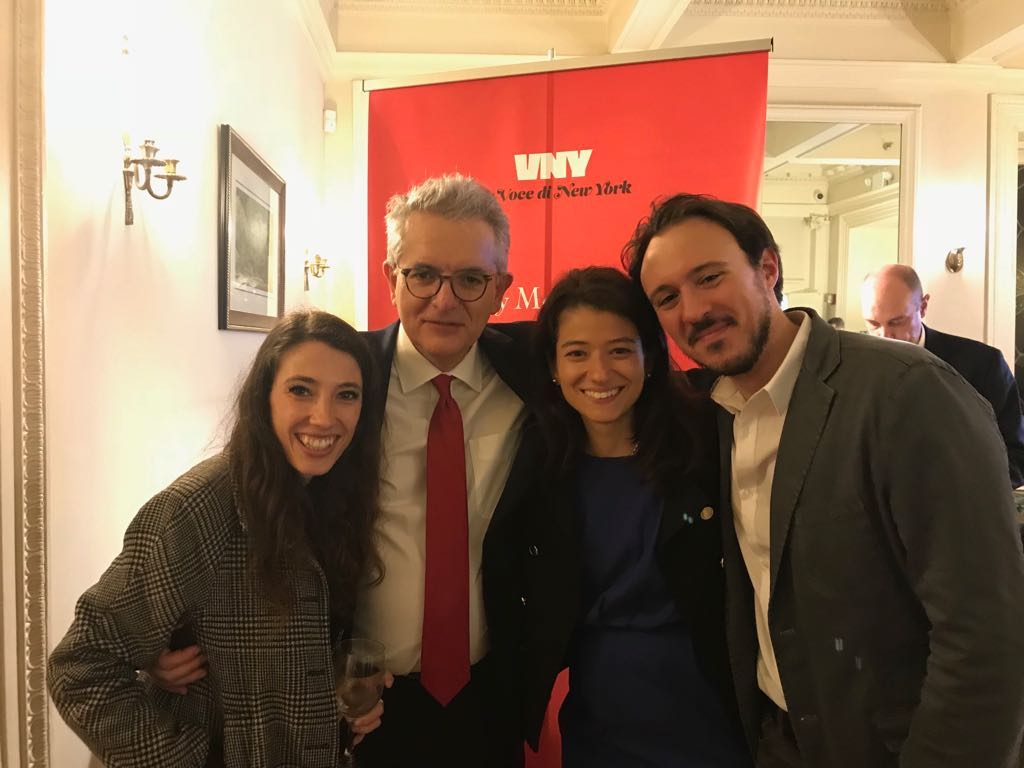 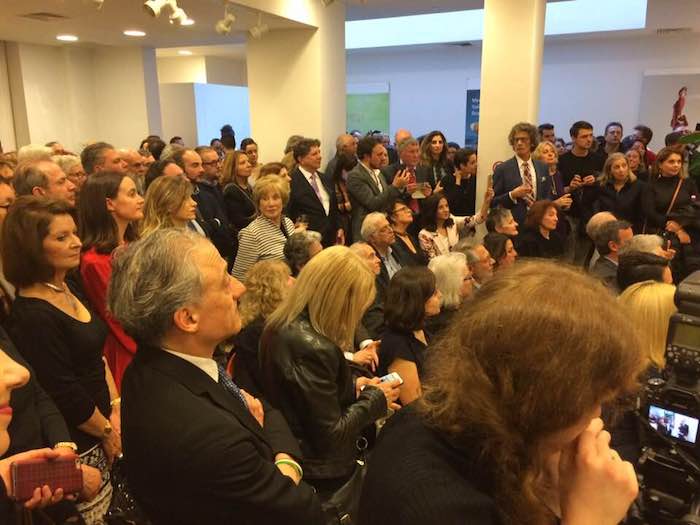 Leggi in italiano
Over 200 Italians and Italian Americans, numerous diplomats and international journalists came to the Italian Trade Commission in Manhattan to celebrate the democratic values of Liberation Day and the importance of freedom of the press in a democracy. To Olivia Nuzzi, correspondent of New York Magazine, the award of "VNY Media Award Liberty Meets Beauty"

Celebrating Liberation Day, in defense of liberty, and the beauty that liberty brings. On Wednesday, April 25th, in the elegant building of the Italian Trade Commission on the Upper East Side of Manhattan, grand festivities for the fifth anniversary of La Voce di New York. More than 200 people from supporters of La Voce, international journalists, institutional representatives and readers filled the rooms of the Italian Trade Commission. A huge crowd that participated in celebrating the first journalism award of La Voce di New York, the VNY Media Award 2018, awarded to the Italian American journalist, Olivia Nuzzi, White House correspondent for New York Magazine.  An evening dedicated to the democratic values of liberty dedicated also to the entire Italian and Italian American community of New York. A celebration kicked off by the director of the Italian Trade Commission, Maurizio Forte: “Today, Liberation Day, is an important moment for Italy, for Europe and for the entire world. We must thank the United States for their help during the Second World War. It is a precious occasion to celebrate a free newspaper such as La Voce di New York, to which I wish all the best”. As usual every year, our director, Stefano Vaccara spoke at the opening of the festivities. In his speech, he highlighted the necessity, now more than ever, to support information that is truly free and independent. Especially now, to oppose phantom extremisms and authoritarianism that are calling into question the democratic values that allowed Italy to rise up from its fascist era: “In the past, even in the recent past, democracy was stronger and it would not have been too dangerous not to underline with such force the virtue of Liberation Day”, stated Director Vaccara. “Today, however, in Italy, as in Europe and the world over, the boogeyman of extremism has returned, and it is for this reason that the values of the Italian Resistance, of liberty and beauty, must be protected, more than ever”. And in this case, information plays a predominant role: “We thought to have a journalism award this year and as of this year, as you all know, there are four powers of democracy. Not three. The fourth is that of journalism, and if that power crumbles, the other three will, as well”.

During the award ceremony, two videos were broadcast, produced by Emilio Pursumal and by Antonio Giambanco. The first video retraced, from April 25th 1945 to today, all of the important stages of world history: an historic path that revisited protagonists such as the tensions between the U.S. and Russia during the Cold War, likewise with moments loaded with tension, of the Fall of the Berlin Wall, and ending with, obviously, the challenges of today’s times, in the Middle East and in Europe, in America and in Asia, in the name of peace and freedom of expression.

The second video, instead, was dedicated to the VNY Media Award 2018 winner, Olivia Nuzzi — a video that moved the correspondent for New York Magazine of Italian American origins, thanks to her grandfather from Avellino who emigrated to Brooklyn, and the sacrifices and the love of her family, all the way to the cover stories that demonstrate her natural talent as a reporter. The temperament, tenacity, persistence and courage of a journalist who at the age of 25 knew how to strive to become the White House correspondent of one of the most important magazines in the United States, thanks to her abilities and to her accurate and precise articles.

For this reason, “we gave Olivia Nuzzi this award, and we thank her for having accepted it, as she has demonstrated with her reporting to know how to carve out this role in defense of liberty, which is precious to our newspaper”, director Vaccara reminded everyone again. It is a safeguard against those who “risk quashing” those values – as are the reports from the Donald Trump’s White House, whose presidency in less than a year and a half has upset may certainties and many equilibriums, in America and in the world. Olivia Nuzzi, after having received the VNY Media Award 2018

I am delighted to receive this award, and I thank you for having thought of me. I am honored, and I wish your newspaper a happy birthday”, said Olivia Nuzzi after having received the award from the director, Stefano Vaccara. Nuzzi, who was accompanied by her boyfriend, the famous CNN political journalist, Ryan Lizza, explained: “I believe that in this period of time it is necessary to follow in a more careful and accurate manner possible all that is occurring in the United States, and I am trying to do that by following President Donald Trump and his administration, doing my job the best that I can. I believe that at this moment it is more important to discern and recount facts than opinions”. Vito De Simone during his speech

During the course of the ceremony, Vito De Simone also spoke. The new Chair of the Board of Advisors of the VNY Media group highlighted the necessity of investing in media, now more than ever: “Many have told me that it was wrong to do this now, with newspapers in full crisis, but in my opinion, it was the right thing to do: when a newspaper no longer has the possibility to tell a story, to write about a fact that has occurred, that fact, you see, that fact and that story can be used and recounted at will in a distorted manner”, stated Vito De Simone, highlighting that: “The rule to keep in consideration is always the same: write or be written. And we must never forget that. I believe that this investment will be valuable for the entire Italian and Italian American community in New York”. The ceremony, which also had in attendance the Italian ambassador to the UN, Sebastiano Cardi, was brought to a close by the Consul General of Italy, Francesco Genuardi: “For five years, Liberation Day in New York has also been the celebration of La Voce di New York: I am delighted and honored to be here and I am happy that the voice of the Italian community is so strong, rich and articulate. You are for me the most beautiful expression, one of the most beautiful, of the partnership that exists between Italy and New York”. The Consul underlined the “variety” of articles published by La Voce, and again the “interchangeable” significance that he gives to “Liberty Meets Beauty”, America, New York, Italy, that can all be liberty and beauty. The Consul General of Italy in New York, Francesco Genuardi

This fifth anniversary celebration of La Voce di New York, that included among its sponsors also ACLI New York and Emergency USA, saw as grand protagonist, obviously, Italian culinary excellence. The rich buffet was prepared and curated with careful attention and professionalism by Federazione Italiana Cuochi USA, whose Chef Massimiliano Convertini (Cardoncello DiVino), Claudio Cristofoli (Osteria Laguna), Alessandro Pendinelli (Al Vicoletto) and Raffaele Ronca (Rafele) prepared during the course of the evening numerous delicacies. A sought-after and typically Italian menu, that began with a puff pastries of black truffle cheese fondue and cardoncello mushrooms, and a gorgonzola mousse with breadsticks and caramelized walnuts, followed by the two courses of the Cooking Show, ricotta and spinach ravioli, butter and sage ravioli, beef and veal meatballs in tomato sauce, and fresh ricotta. And in closing, a ricotta cheesecake for dessert. The menu was accompanied by the refined Prosecco Flores Bastianich, by Canoso and Acinum Valpolicella wines, and Monini Extra Virgin Olive Oil, co-sponsor of the event. To finish off, coffee by TuCoffee, for an evening in the spirit of good taste and of beauty. And to never forget those values of the Italian Resistance, that allow us each day to enjoy the liberties of thought and expression, in freedom. And to do this in New York, just as in Italy.