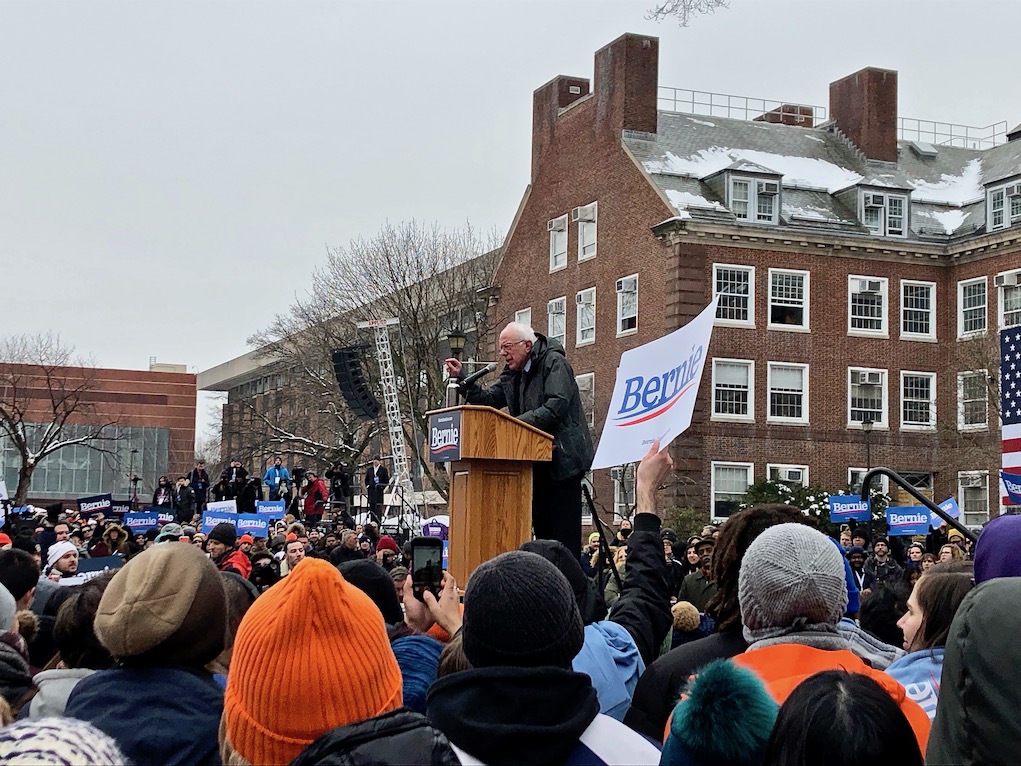 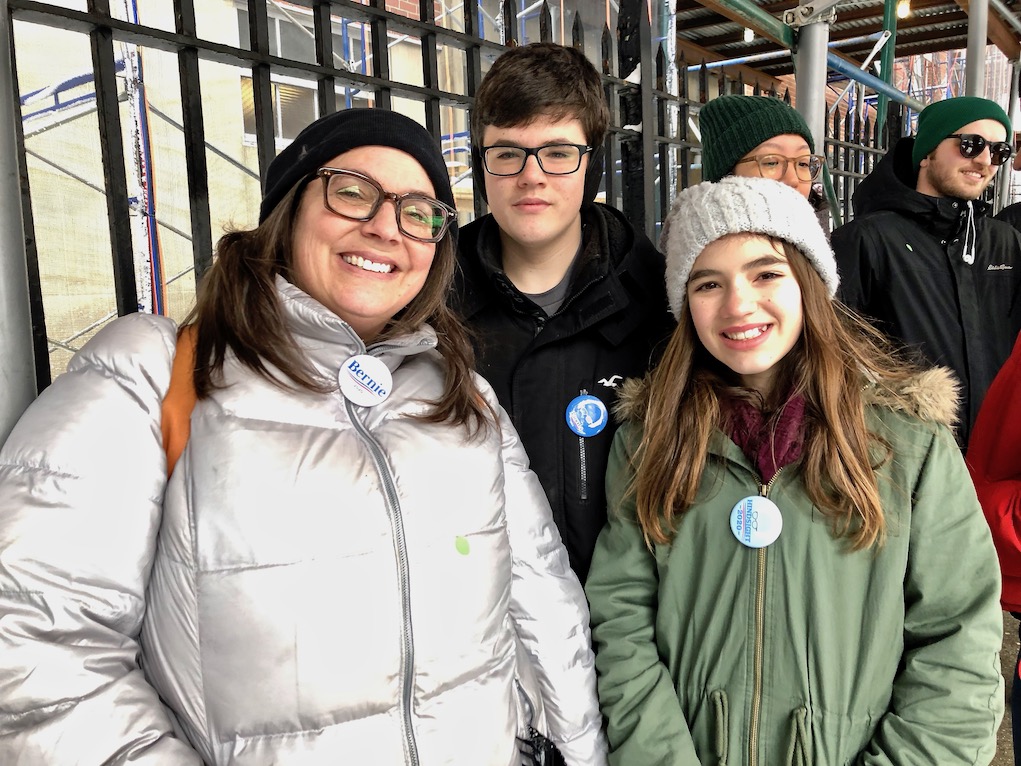 Leggi in italiano
“Too old, too white, too socialist” to become president? The mission of Bernie Sanders’ new campaign will be to repudiate this theory. His first rally of the 2020 race for the Presidency was held on a snowy day at Brooklyn College in New York, not far from where he was born and raised. That’s not a coincidence; neither is it coincidental that the candidate introduced important elements not part of his 2016 platform. Let’s take a look at what’s new. There are those who say Bernie Sanders is “too old, too white, and too socialist” to become the President of the United States. And yet, the feeling at the opening rally of his electoral campaign in the enormous courtyard at Brooklyn College in New York seemed to contradict that theory. You wouldn’t have predicted that on a Saturday morning in early March, thousands of people, coming from all over the country, would brave the bitter cold just to hear him speak, welcoming his entrance as if he were a rock star. What’s certain is that the 77-year-old candidate’s staff—which in the last few days has seen the departure of three of its principal experts—is promptly working on his weak points. And the results in Brooklyn are evident.

Shaun King, vocal activist, and writer, underscored these results when he introduced the Senator on the stage. More than just a veteran of Capitol Hill, Sanders still feels like the activist that he was when he participated in the March on Washington for labor, liberty, and in defense of the civil and economic rights of African-Americans, alongside Martin Luther King Jr. on August 28, 1963. It’s no coincidence that this pivotal event from his youth was brought up on this occasion. In 2016, Sanders won the hearts of many—but not those of the African-American community, which, it was noted, was by and large absent from his advertising commercials.  It was also noted by many that during the Democratic primaries the Independent Senator focused too much on class struggle, and ended up not paying enough attention to the minority vote, which, sure enough, did not reward him.

Lesson learned. Now there’s a new emphasis on the already well-known activism of Sanders’ youth. As a student at the University of Chicago, the young Sanders became the leader of a movement for racial equality and actually helped to conduct the first sit-in at the University of Chicago, camping with 32 other students, outside the office of the university president in order to protest segregation. What’s more, he passionately distributed leaflets throughout the city, despite attempts by the police to stop him; and he was among those activists that confronted the bulldozers, trying to prevent trailers from being built where children of color would be forced to study due to the overcrowding of integrated schools. He didn’t accept defeat, not even when the police, who threatened to arrest him, had to bodily remove him. This narrative – strategic in convincing Democrats that he’s anything but “too white” – wasn’t given sufficient prominence in Sanders’ last campaign, as is equally the case for his personal family history. Up to now, Sanders has never liked to open up about his past, but here for the first time, on the stage set up in Brooklyn, the American socialist finally recounted his experience, that of being the son of a Polish Jew that fled his country because of the poverty and the Holocaust that eventually exterminated all of his relatives. He described being raised in a working-class family that lived hand-to-mouth and living in a rent-controlled apartment a short distance away from Brooklyn College, where he studied before transferring to the University of Chicago. He underlined the contrast between his childhood and that of Donald J. Trump: “I didn’t have a mother and father who gave me millions of dollars to construct luxury skyscrapers, casinos, and country clubs,” he addressed the crowd. In 2016, he launched his campaign from Vermont, the state he represents as a Senator, but this time around he has chosen New York. This could be interpreted as a return to his roots. Perhaps he wants to prove that his “socialism,” rather than a nonconformist quirk in stark contrast with the American tradition, is actually an authentic and considered choice that is consistent with, and not contradictory to, the ideology of the United States of America. As to the claim that he is too old, what does chronological age matter when your supporters are predominantly young people? So many twenty-year-olds rushed to Brooklyn College to support him. For some, it was their very first rally. Like Liam, 23, arriving expressly to New York from Washington D.C. for this rally. “I think he has a good chance of winning the primaries this time. He’s the front runner, and he’s doing a great job of steering the debate in the Democratic Party,” he explained. Is he too old?  “The mainstream media seems to encourage the candidacy of Joe Biden, without even mentioning that he’s only one year younger than Sanders.”

According to Liam, instead of looking at his color or his age, we would do better to look at his platform.  “I’m a person of color and I strongly support him. I prefer him to a candidate like Kamala Harris, considered a strong candidate because she’s an African-American woman, but, from my point of view, she doesn’t have a good record as the Attorney General of California, because her actions have disadvantaged people of color and immigrants.” Liam didn’t give much weight to the definition of “socialist” either saying that “he supports rights that are already a reality in Europe, like a free public health system and an education at affordable prices. That’s what many Americans want.”

For Rebecca, 23, this wasn’t her first Sanders rally, she had already seen him in person in Michigan during his first presidential campaign. “I think that I’m a social democrat, and his proposals are very close to my vision of politics.” She added, “I think he’s the most genuine candidate in the field.” According to Julie, 23, “he’s the only one in the recent past who has shown a bit of compassion for the working class. I think that’s a rare thing.” Both women also admire Elizabeth Warren, who, in the crowded Democratic field for the primaries, seems to be the most similar alternative to the Independent Senator from Vermont. “If Sanders wasn’t in the picture, I would have voted for her,” Rebecca asserted. And for Julie, “the other candidates will end up facing the same problems as Hillary Clinton.  I don’t think they’re in a position to convince the conservative base. Sanders is among the few that could defeat Donald Trump,” she remarked. Skyler, 21, from New York, more than anything approves of his proposal of guaranteed free universal healthcare.  “I also like his promise of cutting politicians’ salaries and of decreasing the price of medications.” Could he win? “If the Democratic National Committee doesn’t get involved, I think so.” Too old? “No, I don’t think so. What’s important is his political platform. And he has a lot of strong proposals.”

It’s not just young people that like Sanders. Tracy is 44 years old, lives in Brooklyn, and has two children, the oldest is 14 years old and the youngest is 11. During the New York rally, both of them braved the cold in order to accompany their mom to Brooklyn College. “We love Bernie, I voted for him in the 2016 primary, but then he lost, and at the presidential election I chose to support the Green Party candidate, Jill Stein,” Tracy said. “I’m an educator, and above all else, when talking about teaching, my impression is that the Democrats are too close to the center. I agree with Sanders, everyone should be able to receive a quality education.” Moreover, she added, “he is someone who is good at connecting with the people, and I feel like he’s more genuine than anyone else.” In her opinion, “despite the media underestimating him in the past, the very fact that the Senator has managed to raise more than 10 million dollars in less than a week is indicative of his strong position… I believe he can really win, both the primary and the presidential elections. I believe in him and I have high hopes for him. Especially for the future of my children.”