Leggi in italiano
Among the many VIP guests there was Donatella Versace. Rumor has it that she used to rent a three-bedroom suite with one of the rooms to be used exclusively for her makeup. She also requested that note pads and pens be strategically placed every five feet around the entire apartment, because “inspiration can come at any moment.” Saudi King Abdullah in 2010 rented 200 rooms at the last minute, forcing the hotel to relocate 200 guests who had already booked, and then, he was a no-show. And then when President Mattarella almost ran into Kanye West and Kim Kardashian… 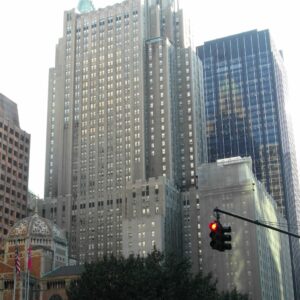 An image of the imposing Waldorf Astoria that today extends from Madison Avenue to Park Avenue. (Photo Wikipedia)

I am very fortunate to live on East 49st and 1st Avenue. Every day when I walk to Park Avenue, I get to admire three timeless Art Deco masterpieces:  the Chrysler, the original General Electric skyscraper and the Waldorf-Astoria hotel, which is currently closed for renovation.  Since its closure, two years ago, I have been gripped by a sense of panic every time that I walk by.

My mind goes back to the renovation of the once elegant Plaza Hotel which was gutted and then completely rebuilt, with the exception of the landmarked lobby and public areas. Tacky replaced elegance, the sophisticated and historic Plaza Hotel was partially lost to a flashy condo/apartment building and its hotel lobby partially closed to the general public. Remembering how much time I spent in the bustling lobby of the Waldorf-Astoria, observing guests and admiring the beautiful Art Deco interior, my biggest fear now is that it could follow suit.

The “new” Waldorf-Astoria opened in 1931, in the middle of the Great Depression. With 2,200 rooms, it was then the world’s largest hotel and, at forty-seven stories high, until 1963, also the tallest. From the stunning Art Deco entrance to the gorgeous mosaic floors, the lobby and ballrooms of the hotel had no equal; it was even reported that a quarter million dollars’ worth of gold plated doorknobs were ordered from England for its rooms. Strategically located in the middle of its lobby was a bronze clock, which was originally commissioned by Queen Victoria for the 1893 Chicago World’s fair and was later purchased by John Jacob Astor IV.  It was one of the few pieces saved from the demolition of the original Waldorf-Astoria.

The story is that John Jacob Astor placed a small gold Statue of Liberty on top of this British clock, almost causing an international crisis. Not sure of the opinion of Queen Elisabeth II on the matter during her stay at the Waldorf, but it makes you want to smile and shout “God Bless America”!!

From its opening, the Waldorf-Astoria had been the residence of every U.S. president visiting New York, from President Hoover and, continuously, to President Obama, who ended the tradition in 2015 when the hotel was purchased by the Chinese Insurance group Anbang.

The hotel was built with a private train platform, “track 61”, which connects the hotel directly to Grand Central Station. This track was used by President Franklin D. Roosevelt to commute to the hotel, but also utilized by artist Andy Warhol in 1965 for an “underground party” where, it was reported, they could not serve any food because of the threat of other familiar New Yorkers crashing the party: rats. Everyone who was, or claimed to be, someone, stayed at the Waldorf-Astoria over the years. At some point the hotel was called “the vertical Beverly Hills” due to the many Hollywood celebrities staying at the hotel.

Cole Porter and Frank Sinatra were permanent residents, as well as the U.S. Ambassador to the UN, and President Eisenhower, who lived in the hotel for 30 years. Glamourous guests like Marilyn Monroe, Ella Fitzgerald, Sophia Loren, Brad Pitt and Angelina Jolie and innumerable Royals, including Emperor Hirohito, King Saud, King Faisal, and Queen Elisabeth II were also among its guests.

The spectacular Royal Suite had also been home to the disgraced King Edward VIII and his American wife, Wallis Simpson, who lived in it until the 1950s. Once I upgraded a Foreign Minister to this suite, who afterwards commented that he was late to a meeting because “I got lost in the room”.

Memorable movies were filmed at the Waldorf-Astoria, from “Week-end at the Waldorf“ with Ginger Rogers, to “Scent of a Woman” with Al Pacino and “Maid in Manhattan” with Jennifer Lopez.

By staying at the Waldorf, you could often witness something unexpected. Once, Italian gangster Lucky Luciano moved into the Waldorf-Astoria Towers, stating that “if everybody is going to call me the boss, then I was entitled to live in the Waldorf Towers above Frank Sinatra,” but something went wrong when one of Luciano’s goons had an argument with the front desk clerk, who threatened to kick Luciano out. Lucky Luciano bribed the desk clerk with $200 a month, saying, “I knew the Towers wasn’t going to throw me out. After all, I was going to pay the rent regular”. It paid off. In 1936 detectives stormed the lobby to arrest Lucky Luciano, but the clerk tipped Luciano off and he was able to escape.

You could expect anything to happen even if you were not a movie star, or a gangster. In 2012, an Australian tourist and fan of the TV show “Gossip Girl”, while wandering inside the Waldorf-Astoria inadvertently stumbled into the filming of a scene of the show. She was mistaken for one of the extras, given a flute of champagne, a hairdo and, to her surprise, for the next six hours she played a part in the scene. If you dress the part in New York, you can crash any party and as she found out, no one will notice. Among many regular guests was Donatella Versace. Rumor has it that Donatella used to rent a three-bedroom suite with one of the rooms to be used exclusively for her makeup. She also requested that note pads and pens be strategically placed every five feet around the entire apartment, because “inspiration can come at any moment.”

Nothing compares, however, to the eccentricity of late Saudi King Abdullah, who, during Thanksgiving 2010, rented 200 rooms at the last minute, forcing the hotel to relocate 200 guests who had already booked, and then, he was a no-show. 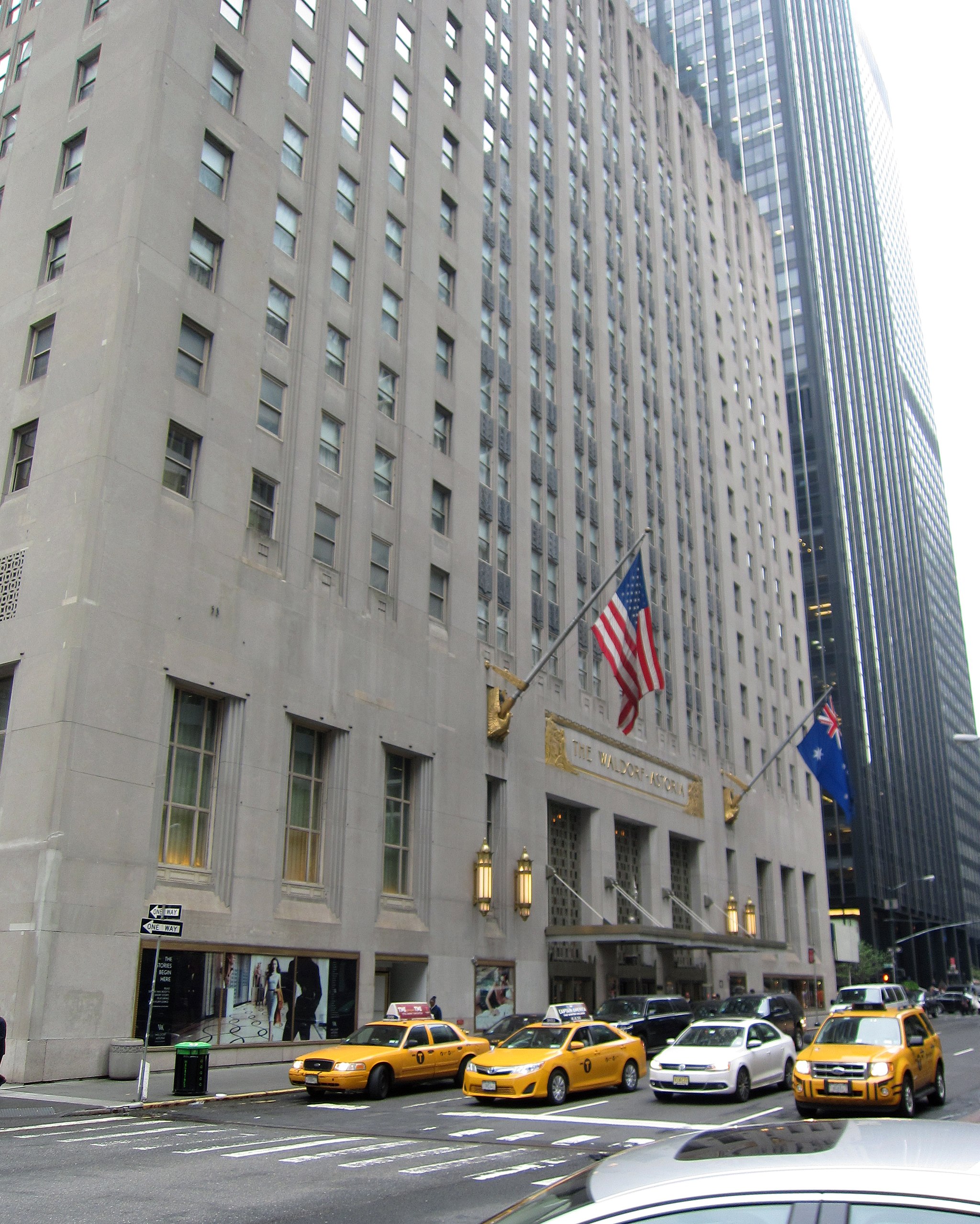 The Waldorf-Astoria now on Park Avenue

I have booked many clients of mine at the Waldorf-Astoria, among them, Oscar winning director Bernardo Bertolucci and, a few years ago, I had the honor of assisting the delegation of beloved Italian President Sergio Mattarella on his State visit to the U.S.  Kanye West and Kim Kardashian were staying just across from the President’s room, which often made me wonder how a casual encounter between them in the hallway or elevator, might have unfolded. One former General Manager told me these things often happen. Recently, a US President was exiting the hotel elevator, only to witness all of his secret service agents looking in the opposite direction from him. He quickly realized that they were staring at the famous movie star Angelina Jolie, walking in front of them towards the exit.

I am sure the President understood the situation. After all, JFK himself had a famous steamy encounter at the Waldorf with another irresistible movie star, Marylyn Monroe. To paraphrase a famous movie line, I’d say “The Waldorf is like a box of chocolates, you never know who you are going to meet”.

Unlike other many other famous European hotels, like the Crillon in Paris or the Savoy in London, where I was denied access to the lobby because I was not a guest, the Waldorf-Astoria, like all other hotels of Gotham represent the very best that New York has to offer; not beautiful lobbies closed to the rest of the world, but lobbies and hotels open to everybody, in a continuous interchange of life and experiences with the city that they are part of.

I look forward therefore, to the reopening of the hotel, hoping that it will still be an integral part of the life of Gotham and allow the hoity-toity as much as the hoi polloi of the world to mingle together in the hotel and create wonderful memories which will become part of the history of New York for generations to come