The New York Times wrote, “[  ]…conjures up visions of titanic monopolists who crushed competitors, rigged markets, and corrupted government”.  Now, I am pretty sure I know who you are thinking of, but hold your horses! This quote was from February 9, 1859 and it refers to the so called “Robber Barons,” ruthless, egocentric, unscrupulous businessmen, immeasurably rich, mingling politely with each other while brutally fighting for money and power. These men of the Empire State, Rockefeller, JP Morgan, Gould, Vanderbilt, Carnegie and Astor reshaped New York as the capital of the Empire, the new Rome.

The Astor family made its fortune from the beaver pelt trade, illegal opium trading and by investing the profits in New York real estate. The Astor Place subway station still displays the beaver as the original symbol of Dutch New York and of the Astor family. Among the great gifts the Astors left to the city are the New York Public Library and a legacy of grand hotels, while New Yorkers in exchange named Astoria, Queens after them.

Astor House was the first luxurious and now forgotten hotel in New York. Built in 1836 near St. Paul’s Chapel and occupying the entire block on Broadway between Vesey and Barclay Streets, it was favored by the powerful and wealthy of the time. Since it was also the seat of the Whig Party (precursor of the GOP), President Abraham Lincoln stayed there as well as his Secretary of State William Seward, who lived at the Astor House for thirty years. The hotel was demolished in 1926, but not before hosting about eighteen U.S. presidents from Andrew Jackson to Theodore Roosevelt, more than any other hotel in the U.S. The Astors then moved uptown, building the Waldorf-Astoria, the Knickerbocker, and the incredible Astor Hotel in Times Square (demolished in 1967). 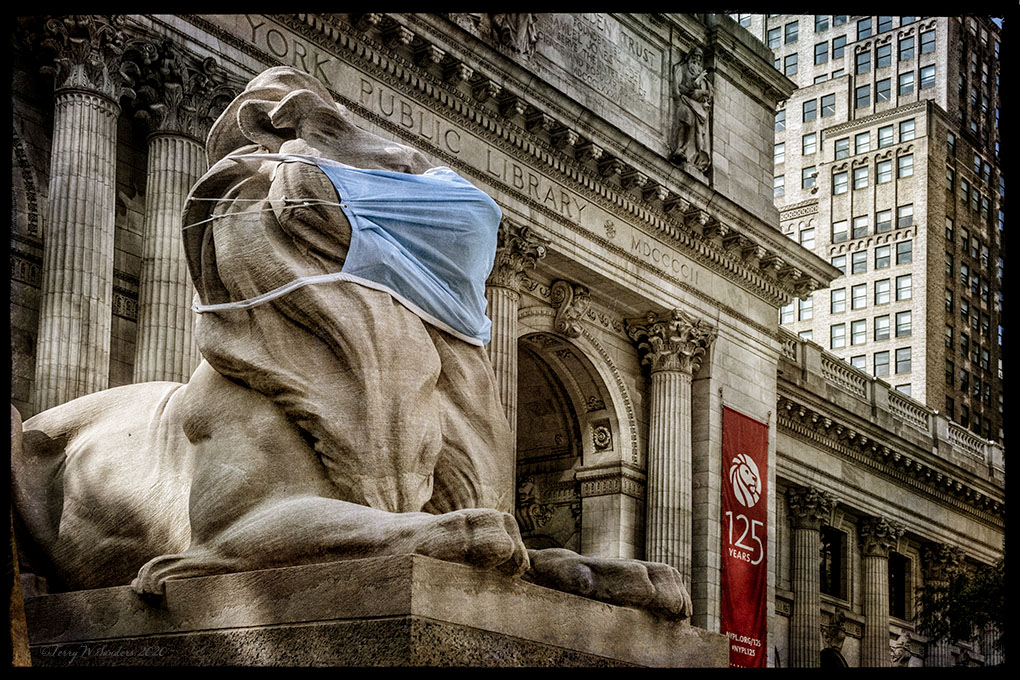 The New York Public Library, built by the Astors, here photographed during the pandemic: Photo by Terry W. Sanders

“You have undertaken to cheat me; I won’t sue you… I’ll ruin you.”  Here we go again. I know who you think made this statement, but… we are not there yet. That was the ruthless tyrant Cornelius Vanderbilt, “The Commodore,” powerful patriarch of the Vanderbilt family. From the Astors’ point-of-view, the Vanderbilts were nouveau riche, but they could not be ignored as their fortune, made from shipping and railroads, made them the richest family in America. In today’s terms, you would need the wealth of Bill Gates and Jeff Bezos combined to match the Vanderbilt fortune.

The story goes that in 1901, the Astors were building another elegant hotel, the St. Regis, across from the Presbyterian Church on 5th Avenue and 55th Street. This angered the Vanderbilts who wanted to prevent them from building a commercial hotel just a few blocks away from their mansion (if they thought the St. Regis was bad, today they would be facing Trump Tower). The Vanderbilts were counting on a New York law which prohibited a liquor license from being issued to any business whose entrance was less than 200 feet from a church. The Astors then moved the main entrance of the hotel, from 5th Avenue to 55th Street, thereby placing it in compliance with the required distance. At that point, Rockefeller, another “nouveau riche kid on the block” came to the aid of the Vanderbilts and bought a mansion nearby to the St. Regis, so that the Astor would lose the two-thirds majority votes needed from its neighbors to secure their license. In response the Astors bought a nearby townhouse to outvote the combined Rockefeller -Vanderbilt vote and, just to be sure, they also “bought” a N.Y. State Senator who changed the law so as to exempt all hotels with more than 200 rooms, including the St. Regis. Rich Uncle Pennybags knew that to win at Monopoly you need to put hotels on the most expensive streets.

While John Jacob Astor IV was expanding his hotel empire in New York, the Vanderbilts were busy reshaping the city with the creation of the magnificent Grand Central Station, a project that had no equal until the late 1930s with the development of Rockefeller Center by John D. Rockefeller. William Gwynne Vanderbilt opened the Vanderbilt Hotel (now apartments) on Park Avenue and 31st Streets, an elegant Adam- Style building where he occupied the top floor. The only original part remaining is the restaurant facing Park Avenue, still with the original Guastavino tiles.

The Vanderbilts surrounded Grand Central Terminal with an array of grandiose buildings and hotels, starting to the east with the Biltmore hotel (the subject of a famous lost landmark battle), the Roosevelt, the Yale Club and the Chatham hotel, which disappeared together with the pedestrian Chatham Walk; to the west the Intercontinental Barclay and the elegant Commodore Hotel (now the Grand Hyatt).

In 1977 the Commodore was on the verge of collapse when developer Donald Trump promised the City to “save it”. Instead, “greedy, greedy, greedy” Trump, as Mayor Ed Koch called him, covered the once elegant façade with cheap reflective green glass, crashed the ballroom and ripped the city off with a 40-year $400 million tax abatement.

Fred Trump made a fortune in real estate in Queens often by profiteering, and his son, Donald, followed in his father’s footsteps, while Harry Helmsley much like Fred, created a real estate empire in Manhattan. However, Helmsley will be remembered more for his tyrannical wife Leona, nicknamed “the Queen of mean” than for once owning the Empire State building.

When the Queen of Mean met the Mean from Queens, you knew it was hate at first sight.

Leona was in charge of the Helmsley hotels, which consisted at that time of a variety of 1970s not- particularly-esthetically- pleasing hotels, The New York Helmsley on 42nd Street (now Westin) and the Helmsley Midtown. The Helmsley Palace (now Lotte Palace) is comprised of two parts: the historic Willard house built in 1882 and designed in Renaissance style after the Palazzo della Cancelleria in Rome by McKim, Mead and White, and the hideous Darth-Vader style addition built by Harry Helmsley. And finally, the Park Lane Hotel, where it is hard to decide which is uglier, the 1970s post-modern style exterior or the kitschy Luis XIV interior. However, the view of Central Park is breathtaking. Years ago, I visited the apartment of Leona Helmsley, which extended throughout the entire top floor of the hotel. It was gigantic, including her closet, so much so that for the first time in my life, I had a hard time coming out. I could not find the exit.

After a bitter rivalry with Helmsley stemming from their past deal over the Empire State Building and the St. Moritz Hotel, Trump got his hands on the prized Plaza Hotel (which he bankrupted and re-sold at an $83 million loss) next door to the Park Lane. He described Leona as a “disgrace to the industry and a disgrace to humanity in general”. Once, at an event, “classy” Trump poured an entire bottle of wine into the hood of Leona’s coat. Leona was indeed a nightmare to deal with in business but was also particularly cruel and tyrannical with her employees. She told her housekeeper, “We don’t pay taxes; only little people pay taxes”, however that sentence resulted in a nineteen-month jail sentence for tax evasion.  Without any irony, Trump told Leona “You would not be able to randomly fire and abuse people in order to make yourself happy”.  Leona stated, “I would not believe Donald Trump if his tongue was notarized”.

As of today, the braggart Trump only manages the tacky gold-plated Trump Central Park Hotel after his name was pulled off from the former Trump SoHo which was then quickly renamed the Dominick.

The “Gilded Age” Robber Barons gave Gotham culture, art, and priceless architectural treasures, creating hotels that are still the envy of the world and are worth millions. But with wannabe hoteliers like Donald and Leona, we are just left with minions.