All of Italy is jubilant for the hard-won, and unexpected, victory at the 2021 European Championship, where they beat England at Wembley. The large Italian community living in New York is doing the same.

After the last penalty kick blocked by Gigio Donnarumma, the Italian team lead by Roberto Mancini brought home the second European trophy in the history of the national team, following the one won in 1968.

The Italian restaurant Ribalta in Manhattan, which planned a block party with the closing of the street and three big screens indoor and outdoor, was one of the gathering points for all Italians in New York. “We invite all Italians in New York to show up, hoping we can all come together and celebrate during the game,” said Rosario Procino, one of the owners of Ribalta, last week. “Hopefully, the game will give us reason to celebrate!” he added. And it did! The crowd before the beginning of the game at the Ribalta block party, on Manhattan’s 12th street. (Photo by Terry W. Sanders)

Even before the Azzurri’s victory, there was a lot of trepidation on 12th street for the block party organized by the Ribalta restaurant, with about 300 people ready to cheer Italy on during today’s final. Although the game was scheduled to begin at 3pm, starting at lunch time it was almost impossible for New Yorkers to move through the crowd dressed in light blue t-shirts, which included Italians and second, third or fourth generation Italian Americans united by their support for the national team. The soccer-themed cheers were mixed with the lyrics of “Bella Ciao”, famous anti-fascist protest song, and popular Italian songs that would strike a chord for any Italian expat. The crowd on 12th street in Manhattan gathered to watch the soccer final. (Photo by Terry W. Sanders)

As we know, soccer is the glue that holds many Italians together. And when the “Azzurri” play, all of us Italians feel a little closer. Some pizza, friends and the national team: these three things are enough to create the perfect atmosphere.

Today’s game was not just any game, everybody knows that: there were no second chances. In the past, the faces of Italian soccer fans have seen the alternation of smiles and tears. Before the game even started, the air was tense and filled with mixed emotions inside the restaurant overflowing with soccer fans. “Are we going to make it?” was the question everyone was asking themselves. “The English team is stronger; they’ll surely win the trophy,” some of the most superstitious would say. People were praying, blowing kisses to the national pennant and chewing their nails to the very last second. The reaction in the West Village at England scoring at the beginning of the game. Photo by Terry W. Sanders

We chatted with people in the crowd and here are some of their reactions:

Alessandro, 31 years old, is the perfect example of the kind of New Yorker who came out for Italy v. England. Born in New York from an Italian family, Alessandro moved to Italy when he was three years old and returned to the United States as an adult to work in finance. At Ribalta, Alessandro brought a group of friends, all wearing Italy or Rome soccer t-shirts, and the kind of enthusiasm of one who has been a soccer fan his entire life. Cheering in front of Ribalta, in Manhattan, for the Italian goal. Photo by Terry W. Sanders

“There is great energy this year, I haven’t seen this since 2006. Italy has a very young team, which was not among the frontrunners which has made the players to not give victory for granted. Because of the trainer, Mancini, we were able to get to the final. I am really optimistic about the game’s results,” said Alessandro.

Even in 2006, when Alessandro was already back in New York, he felt the same emotions while watching his favorite team winning the world cup with friends and family in the Manhattan restaurant La Masseria, on 48th street. Because Alessandro is unable to travel back to Italy as often as he wishes he could, especially during COVID times, he is happy to have Italian restaurants like Ribalta offering an opportunity for all Italians in the city to feel at home. An Italian fan in front of the pizzeria Ribalta during the final against England. Photo by Terry W. Sanders

43-year-old Babiana and her 11-year-old son Edoardo, from Turin, said they’ve been in New York for a year, and that they’re unable to go back to Italy because of the pandemic.

“I teach Italian in a local school and I miss Italy, I miss my family. It’s more exciting to watch the game here than it would be in Italy,” said Babiana, before allowing her son to chime in. Edoardo said he was also very excited and predicted the Italians would win 3-2: he was hoping for a goal by Andrea Belotti, his favorite player who’s part of his favorite team, Toro. A soccer fan at the Ribalta block party in the West Village, Manhattan. Photo by Terry W. Sanders

Judy Ludovico and Amorika Amoroso, Italian Americans from New York in their 40s, are also passionate about Italian soccer and watched the 2006 World Cup Final. Judy, a festival producer, watches the Roma soccer team’s games whenever she’s in Italy visiting family, something she did once a year before COVID hit.

“I haven’t been to Italy since 2019. I miss it very much, I can’t wait to be able to go back to the places I love and visit cities I haven’t seen yet,” said Judy.

When the Italian national anthem started playing on the Ribalta’s big screen, the two women were transported by the music of their ancestry and said they’ve been wanting to learn its lyrics. They were thrilled to be surrounded by the Italian community to celebrate together being in the final, especially after what the “bel paese” went through during the pandemic. 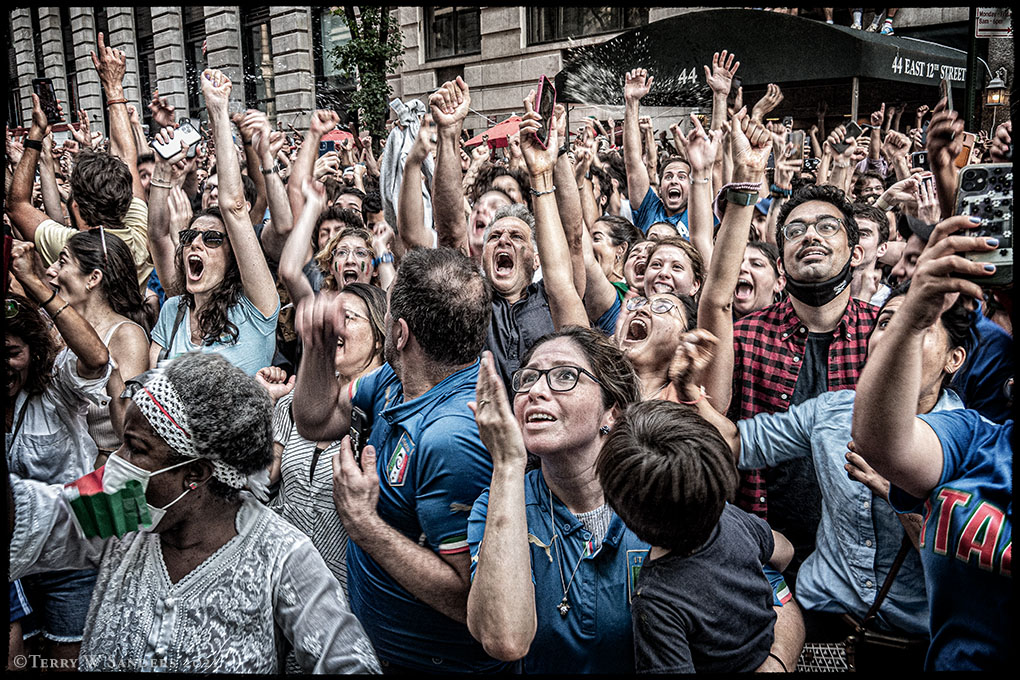 Italians and Italian Americans’ joy on 12th street in Manhattan when the decisive save by Donnarumma won Italy the European Championship.  Photo by Terry W. Sanders

Ricky, 55 years of age, is a New Yorker with Sicilian parents who has watched more than one final in his lifetime. In particular, he spoke of the 2006 one.

“I have many Italian friends; I have talked with one of them and realized they’re all stressed out about the game.”

Beatrice, 29, is a student from Milan who has been in New York City since 2018. She has watched all of the games since the European Championship started this year and came to Ribalta with a group of friends. None of them is Italian, but she made them cheer for her own team anyway. Beatrice sent pictures from the event and videocalled her family in Italy, with whom she had watched the World Cup’s Final in 2006. The excitement during the broadcast of the match in the West Village, Manhattan. Photo by Terry W. Sanders

Brian, a 52-year-old man born in Texas whose grandparents emigrated from Italy, heard of the Ribalta event through last week’s article in La Voce di New York. Brian does not watch Italian soccer games regularly, but he was drawn by the importance  of the European Championship final and by his old passion for soccer, which he played as a young boy. An Italian fan in Manhattan during the Ribalta block party. Photo by Terry W. Sanders.

Carolyn Manno, a 36-year-old sports correspondent for NBC born in Florida, is another casual consumer of soccer who has gotten more intrigued by it in the past few years. Carolyn said she was happy to be able to support Italian sports during such a difficult time for the country, especially just a few hours after the Wimbledon final between the Italian Berrettini and Djokovic.

“Americans are starting to be more interested in soccer, because of the new professional league here in the US and the international soccer personalities that, like David Beckham in the Inter Miami, are coming to play and work in the country. Americans are attracted by good stories, like the one of the Danish player who was saved from a cardiac arrest on the field a few weeks ago,” said Carolyn Manno.

Like many other soccer fans, what Carolyn appreciated most of all is “melting pot” environment that is so typical of New York and of this sort of event in the city. The match didn’t start in the best of ways, as the goal by the English player Shaw froze everyone present. Only passion, grit and attachment to the Italian jersey kept the spectators and Mr. Mancini’s players active. At the 67th minute, Bonucci’s goal revived the crowd’s mood: beers splashed around, screams that strained everyone’s vocal cords, trumpets played, and flags flew like never before.

Suffering and tension went hand in hand until the end of the game, when they turned into a liberating and joyful scream after Donnarumma saved the last penalty kick after a 120-minute-long game. After Kuipers, the referee, whistled three times, the public exploded at Ribalta. Italy had won, we won!

An adrenalin rush spread inside and outside the restaurant and the widespread excitement skyrocketed: for a second, we were no longer in a restaurant, we were on the field in Wembley taking the players’ place. No longer was there an ocean separating Italy and New York. Everyone was smiling, some were crying with joy, some were making calls to friends and family, chanting and hugs were all over the place. This is the Italian national soccer team. Today, New York was painted in green, white and red. Passion and happiness for the Italian vistory against England during the Ribalta block party in Manhattan. Photo by Terry W. Sanders.