The article of Dean Anthony Tamburri “When We Were the Muslims” refers to the Italians as “harmless." Are the Muslims uniformly so? U.S. Muslims ought to try talking to other Muslims, U.S. based and elsewhere, about what Islam teaches and how Muslims act

The article of Dean Anthony Tamburri “When We Were the Muslims” refers to the Italians as “harmless’. So correct. Are the Muslims uniformly so? Here is my viewpoint.

There is no doubt that peaceful co-existence and acceptance has been largely achieved here in the US. I have visited the mosque in Westbury, NY more than once and have had cordial conversations about relationships of members of all faiths, or even those with none.  Yes, President Donald Trump must learn more about Muslims and in addition, more about the teachings of the Qur’an and about how Islamic Imams view their own faith.  Might I present an example of being prudent and careful regarding Muslim immigration from terrorist infiltrated zones into the US. Many years ago (1982) there was a recall of Tylenol from the shelves because some capsules had been laced with cyanide after being put on sale. All 31 million capsule packages in the US were recalled. Only after a solution was found was the product replaced. (They produced caplets and tamper resistant packaging to make tampering more difficult). Message? Solve the problem, then restock…. Stop all entry into the U.S, find a more exacting vetting process, then resume immigration… No need to wait for another Boston Marathon incident or a Major Nidal Hasan massacre  before ”emptying the shelves.” Remember that Captain Humayan Khan, a hero, was killed by militant Islamists, not by an eventual American candidate for president.

As a skeptic of all goals Semitic, no matter their statehood or religion, Arab Semites or the Israeli version, it is not hate, Anti-Semitism or Islamophobia when facts, as we can best know them are exposed and appropriate action taken.

Only the blind refuse to see that secular, non-activist Muslims are those who can live at peace in the West. They embrace the customs but not the violence in the Qur’an – they are “mess-hall Muslims”, much like the old “cafeteria Catholics” who picked and chose what worked for themselves;  scant adherence and no violence involved. Assimilated Muslims cite only the peaceful Qur’anic verses proclaimed when Muhammad was still seeking power. Those who follow the Medinan verses of the Qur’an, the “activist” Muslims are violent because those verses have abrogated the more peaceful Meccan verses, as described by reputable Sunni scholars such as those from Al-Azhar University in Cairo. ISIS is following the Qur’an, they are orthodox, activist radical Muslims (Latin: radix, radices-root). Actually the peaceful Muslims are unconventional, they are the ones living conventional lives in the West and in many other Muslim dominated countries, and do not follow all in the Qur’an, the Sunnahs (teachings of Muhammed) or Hadiths, (traditions-commentaries)! 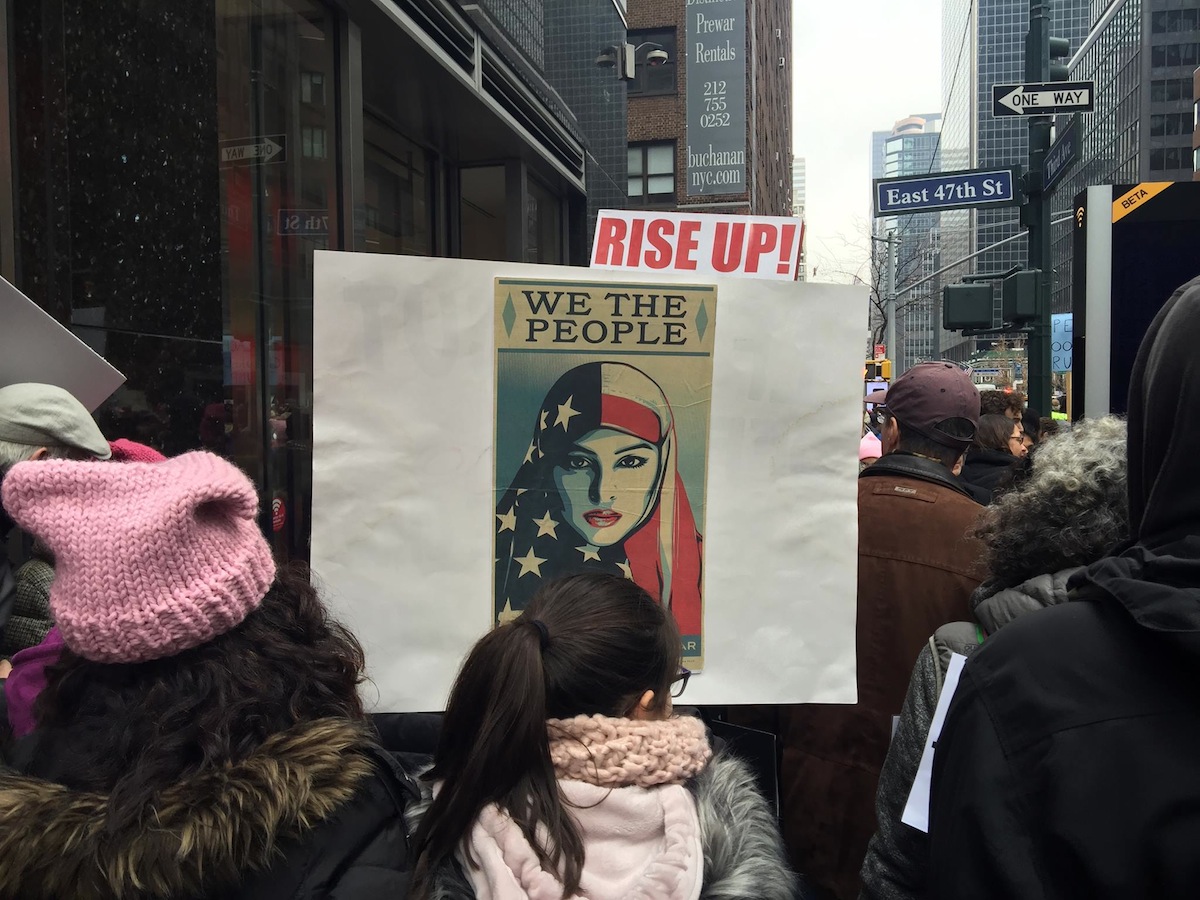 According to the words of the former leader of Iran the Ayatollah Khomeini: “Islam makes it incumbent on all adult males, provided they are not disabled or incapacitated, to prepare themselves for the conquest of [other] countries so that the writ of Islam is obeyed in every country in the world… But those who study Islamic Holy War will understand why Islam wants to conquer the whole world… Those who know nothing of Islam pretend that Islam counsels against war. Those [who say this] are witless. Islam says: Kill all the unbelievers just as they would kill you all! Does this mean that Muslims should sit back until they are devoured by [the unbelievers]? Islam says: Kill them [the non-Muslims], put them to the sword and scatter [their armies]. Does this mean sitting back until [non-Muslims] overcome us? Islam says: Kill in the service of Allah those who may want to kill you! Does this mean that we should surrender [to the enemy]? Islam says: Whatever good there is exists thanks to the sword and in the shadow of the sword! People cannot be made obedient except with the sword! The sword is the key to Paradise, which can be opened only for the Holy Warriors! There are hundreds of other [Qur’anic] psalms and Hadiths [sayings of the Prophet] urging Muslims to value war and to fight. Does all this mean that Islam is a religion that prevents men from waging war? I spit upon those foolish souls who make such a claim.”

Christians who actually follow the lessons and not the “exact words” (the Sola Scriptura adherents) of the New Testament seek peace, love, patience, forgiveness, etc.  They are the majority, however “rapture” seeking evangelical/fundamentalists in the US who can’t wait to start another war, one with Iran(a country that has not invaded another country in 250 years, even with some hawkish leaders) to encourage Jesus to come back… after which all the Israeli Jews who convert to their form of Christianity will be swooped up into paradise… I suppose Jesus will then bless those who have caused the insurmountable suffering of innocents in the Middle East. Christian Zionist pastors, politicians and other followers are “useful fools” to the Israeli militants who plan for their state to extend from the Nile to the Euphrates. Once the war starts, the C-Zs will be dropped by the Israelis who will surely smirk at the bible babbling zealots’ thoughts of Jews being raptured into heaven. We must separate the Palestinian cause, a just one, from violent Islamism, an evil one. A day negotiating is better than a day invading. Remember, the young soldiers, Americans and others, who die in desert hellholes are sent there by old politicians who die in their warm beds at home… and the military industrial congressional complex pockets the proceeds. There is no flag large enough to cover the coffins of the innocents slaughtered in wars… and the concept of patriotism has often been confiscated to serve as the last refuge of scoundrels.

Our returning wounded veterans should be a source of embarrassment to those damned old men who are part of the military industrial congressional complex, who have enriched themselves, while sending our young and finest to die, or worse, to come home severely wounded and disabled – veterans who were carried out of the foxholes in the desert, sent there to feed our demand for oil – and now we can produce enough of the stuff to fulfill our needs and export the excess! What the hell did we invade the Middle East for? – and they still hate us- why? It ain’t because they hate our freedoms, if so they would also bomb Andorra, Switzerland, Denmark, etc. Ron Paul had it right – let all the countries in that area figure out how to live with each other – stop the only country with nuclear weapons in the Middle East from bribing our congressmen to get the US to fight their need for hegemony with our soldier’s lives. Those who accept campaign contributions from other countries’ PACs are traitors to the USA. Remember the majority of those who took down the towers were Saudis—so we invaded Iraq! Ah but the oil, the oil.

Use the money spent on military vehicles which were practically handed over to ISIS, for lifetime medical care for those our government put, without necessity, in harm’s way, and no weapons giveaways for anyone. All we should drop there from planes are blankets, tents, medical supplies, water, food etc. imprinted “with love from the people of the USA” instead of explosives stamped “made in the USA”.  Remember the cluster bombs dropped by our “only ally” in the Middle East on civilian targets e.g., in Lebanon a few years back. Which still explode even now killing innocent farmers and children. Dr. Leonard J. Marino is the editor of “LIVS in PlainView”, the monthly newsletter of Long Island Veterinary Specialists located in Plainview, NY. Dr. Marino graduated from Bishop Loughlin Memorial High School in Brooklyn, Columbia College in NYC, where he received his AB degree, served in the US Army during the Korean conflict and graduated from the University of Bologna, Italy where he was awarded an MD degree in 1961.   In the private practice of general pediatrics in Plainview for thirty years, he was on the staff of Nassau University Medical Center, North Shore University Hospital and is Assistant Professor of Clinical Pediatrics at Stony Brook University, appointed to the staff when the hospital and medical school first opened. Dr. Marino has published articles in the Archives of Dermatology and the Nassau County Medical Center Proceedings. In 2016 at the age of 83, he graduated with the degree of Associate in Applied Science with highest distinction from the Veterinary Science Technology program at Suffolk County Community College, the oldest graduate of this program in the country. He is a Board Certified Pediatrician as well as a Licensed Veterinary Technician. Dr. Marino is a fellow of the American Academy of Pediatrics, the Medical Society of the State of New York, the Nassau County Medical Society, the Police Surgeons’ Benevolent Association and is an advocate for both children and animals.