Leggi in italiano
Fifty-five years after arriving in the land that welcomed her with open arms, Franca is disappointed by the position adopted by the Italian government in the middle of the political crisis that Venezuela has been facing since January 2019. "As an Italian immigrant, I feel betrayed. I feel I do not have a homeland because Italy is not supporting the nationals who currently live in Venezuela”, says the 73-year-old woman.

The Venezuelan tricolor was not the only one that flooded the streets of Caracas in the opposition march held last Saturday. The green, white and red of the Italian flag was also glimpsed among the hundreds of thousands who attended to protest the recently sworn in interim president, Juan Guaidó.

Fifty-five years after arriving in the land that welcomed her with open arms, Franca is disappointed by the position adopted by the Italian government in the middle of the political crisis that Venezuela has been facing since January 2019.

“As an Italian immigrant, I feel betrayed. I feel I do not have a homeland because Italy is not supporting the nationals who currently live in Venezuela”, says the 73-year-old woman.

A week after the president of the opposition-controlled National Assembly was sworn in as interim president of Venezuela in front of thousands in a massive march on January 23, the Italian government still does not recognize Guaido. Even despite the fact that the European Parliament and several countries have already done so.

After Europe gave an eight-day ultimatum to Nicolas Maduro to call for free and transparent general elections, Italian Prime Minister Giuseppe Conte warned the international community that “it is not prudent” to support one of the parties in the Venezuelan conflict. He also said that adopting an “invasive” attitude would only cause more division in the world.

Two days later, the vice president of the Italian government and leader of the 5 Star Movement, Luigi di Maio, supported the refusal to espouse a position in favor of one side and insisted that his government does not recognize Guaidó as president because “he has not been elected by the people”. However, neither has Nicolás Maduro.

“The change has to be decided by the Venezuelan citizens. We are on the side of democracy and, therefore, we have to create all the budgets to favor new democratic elections”, Di Maio explained when commenting on the abstention of the MEPs from the parties that form the Italian Government in the European Parliament vote.

The European country’s stance on the Venezuelan crisis has been widely rejected by the Italo-Venezuelan community in the south American country, where the Italian embassy estimates there are around two million of Italian ancestry. 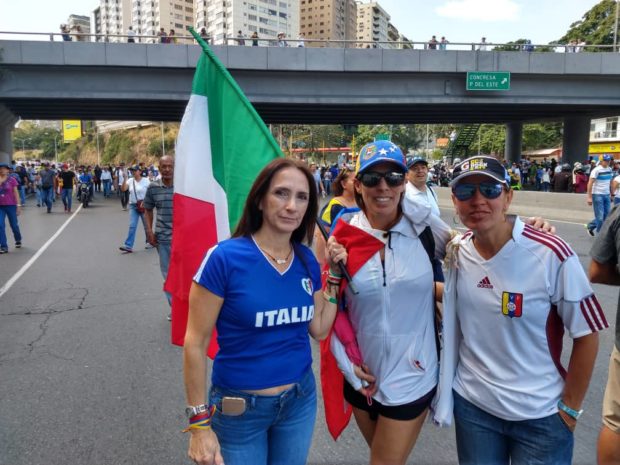 “As an Italo-Venezuelan, I demand that Italy support us in the middle of the crisis we are going through. We require the support of all countries”, said Liliana Capobianco in the opposition’s rally on Saturday.

Franca and her family are part of those who condemn Italy’s position. Her husband, Antonio Testa, was the first member of her family to come to the country. He arrived in Venezuela in 1955, in search of a better future after fleeing from his war-torn country.

“When I came to Venezuela, I was only 19 years old. I came alone, without money or a job. I lived in the house of a friend of my father for four years. I wanted to go back to Italy, but little by little I managed to get ahead”, recalls Antonio Testa, who exchanged the small village of Iesi, in Campobasso (Italy), for the bustling streets of Caracas.

At that time, Venezuela lived under the military dictatorship of Marcos Pérez Jiménez and political freedoms were limited. However, the life of Venezuelans was far from being the same as they currently live in 2019. After the discovery of oil reserves at the beginning of the 20th century, the country started to prosper thanks to the income from the black gold.

By the 1950’s, while the old continent struggled to recover from the Second World War, the Venezuelan economy had a stellar performance. In 1950, it became the fourth richest economy in the world, even ahead of Canada, ranked sixth at that time.

However, the over dependence on oil sales and the rocky economic policies of the past 20 years have made Venezuela hit rock-bottom. Given that the Central Bank of Venezuela, an institution controlled by the Maduro administration, stopped publishing inflation figures in 2015, the National Assembly had assumed the task of disclosing monthly reports.

The National Assembly also reported that annualized inflation in Venezuela closed at 1,698.488%. The figure is alarming, but the projections made by the International Monetary Fund (IMF) for this 2019 are even more shocking: 10,000,000%.

Antonio Testa recalls more simple and prosperous times when he first came to the South American country. “I used to work with picks and shovels in State constructions. I used to earn 12 bolivars back then, the minimum wage. The money used to have a value. With my income, I gave my father back the money he had loaned me to come to Venezuela”, he remembers.

Then he became a bricklayer and little by little, as he says, he was able to afford a car, an office, and much later, an apartment. Now he’s 82 years old and he cannot enjoy his retirement.

Water rationing became the rule in Santa Monica, the working class neighborhood where Antonio lives in Caracas. He also has to rely on family members based in Italy to send the anti-hypertension and prostate medications he needs to take on a daily basis.

Protests of the lack of services and medication shortages intensified in Caracas in the past year. Even in Venezuelan hospitals this basic service has become something rare to see.

According to a survey done by the NGO Medicos por la Salud, out of 40 hospitals monitored in the Venezuelan territory, 70% reported interruptions of the water supply. On the other hand, the Venezuelan Pharmaceutical Federation (Fefarven in Spanish) reports a shortage of pharmaceutical supplies as high as 85% by the start of 2019. 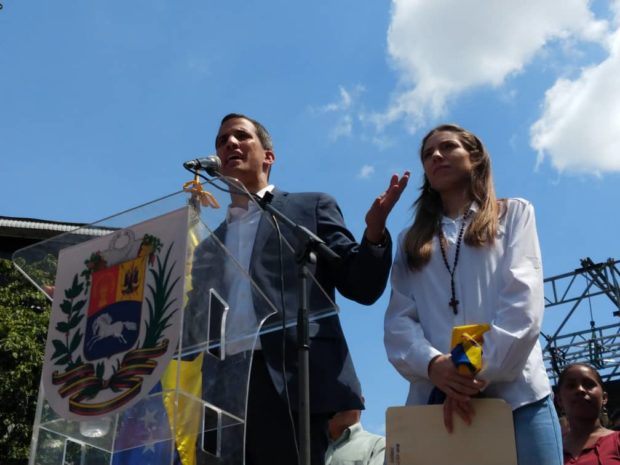 Guaido announced Saturday that the humanitarian aid sent by the US will arrive to Colombia, Brasil and the ABC islands, where collection points have been installed

The return of hope

Gabriela Testa is 21 years old and is from Italian descendant. She’s the third generation of the Testa family raised in Venezuela and is thinking of moving to Italy soon.

According to the International Organization on Migration (OIM), Italy was among the most popular destinations among Venezuelans in 2017, with a total of 49.831 migrants. It is believed that the number is on the rise as the exodus continues.

As many young Venezuelans, Gabriela is afraid of “sacrificing her youth” in a country where she sees no political or economic improvement. However, the opposition’s new move has seemed to restore the faith in many Venezuelans.

Euphoria and hope have taken the streets of Caracas one more time since the political protests that shook the country in 2017 and that came to an end with Maduro’s Constituent Assembly. Guaido’s fresh face and the international community’s backing have encouraged thousands to protest against the current regime and show support to the opposition leader.

“I came today because I want us to be free. My sons already left the country and I’m here by myself. I rely on God and that’s why I’m not afraid”, says Glady’s Ibanez, a 70 year old woman, from the opposition rally. 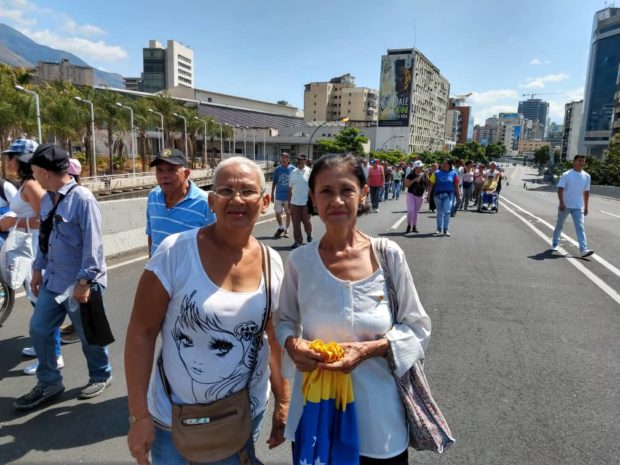 Gladys (left) said she took the streets on Saturday because she wants to grow old quietly. “I don’t want to suffer no longer because of the lack of food or medicines”, she assured.

Diego is part of the Venezuelan diaspora in Spain, a country that had received over 200.000 migrants by 2017. The lack of opportunities motivated the 24-year-old Informatics student to abandon his homeland and try luck in a new horizon.

In spite of this, as many who are living abroad, he’s following the situation in Venezuela attentively. “I fear people won’t learn the lesson and we keep making the same mistakes again”, he says.

However, he remains hopeful after Guaido’s swearing in. “I have a lot of hope. Guaido is not going to be a messiah or a god, and the president that comes after him won’t be either. But I’m hopeful he’ll implement policies that will help fix the economy and foster more opportunities”, says Diego from his current residence in Madrid. 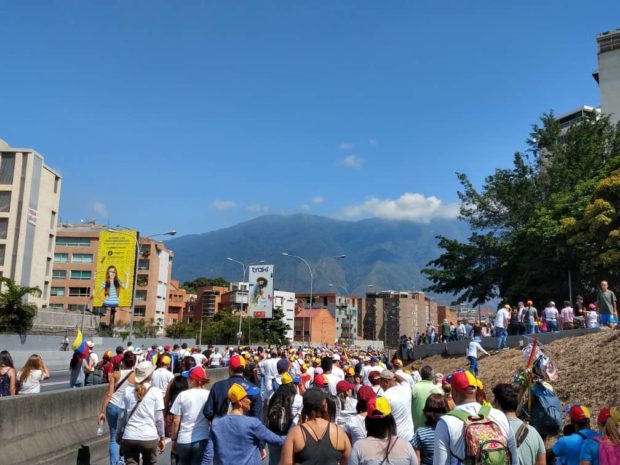 The opposition took the east side of Caracas while chavismo marched in the other side of the city to commemorate the 20th anniversary of the coup that would take Hugo Chavez to the power in 1998. 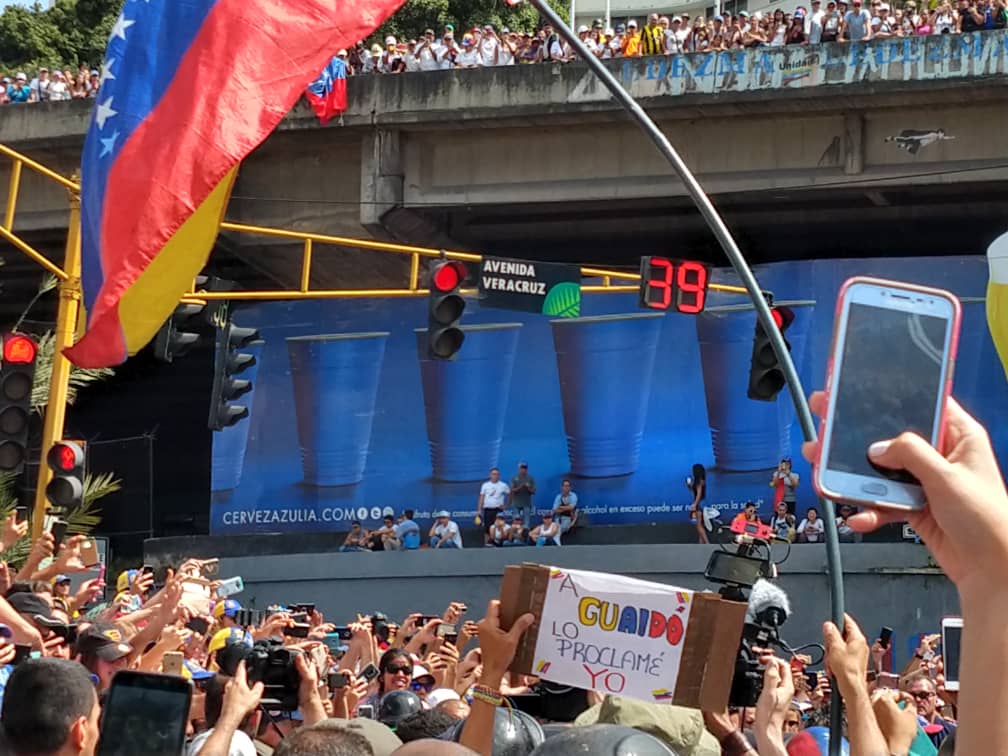 Guaido spoke to the Armed Forces and asked the soldiers to allow the entrance of humanitarian aid to the country. “350.000 Venezuelans are at risk because of malnutrition or lack of medicines”, he said.

Even Maduro supporters are looking for a change in a country sunk in an economic crisis and a collapsed healthcare system. Maria Luisa Quinta, a 77-year-old retired woman, is one of them. She has voted in favor of the chavista revolution since Hugo Chavez’s first election in 1998, but recently her family has been hit closely by the lack of chemotherapies in hospitals.

On January 10, her 11 months old nephew died of cancer. Her family managed to get the baby’s treatment with the support of other State-run institutions, but she suffered firsthand the medicines shortages.

“We used to live in a bubble, always worrying on where we were going to find food or the high prices. We never thought this could happen to us”, says Maria, who lives in the low-income neighborhood of Lomas de Urdaneta in downtown Caracas.

However, she remains loyal to Maduro, although she recognizes the current administration has not done enough to fight the rising prices and the unsupplied hospitals.

“I believe what Guaido is doing is not in the Constitution and I would support a new negotiation process, but with spokespersons that truly represent the people’s interests, not just particular’s”, she says.

Maria, who attended Maduro’s rally from last Saturday, says she’s worried about a possible intervention, but considers she would support the entry of humanitarian aid, but establishing clear terms and conditions.

“I think it would be a good thing, but without intervention, bullets or war. It would only be good if medicines actually get to the hands of the people that truly need them”, says the Maduro supporter.

“I keep supporting the government because I don’t think Maduro is the only that has done things wrong, but he’s not going to be in power forever. Whoever is in the presidency, whether it is Maduro, Guaido or other opposition leaders, has to leave aside the individualistic mentality. That person needs to make health, nourishment and education our priorities”, Maria insists.

Julett Pineda is a Caracas-based reporter specialized in Health and human rights violations. She currently focuses on issues related to health access, malnutrition, public health policies and the current political crisis in Venezuela.