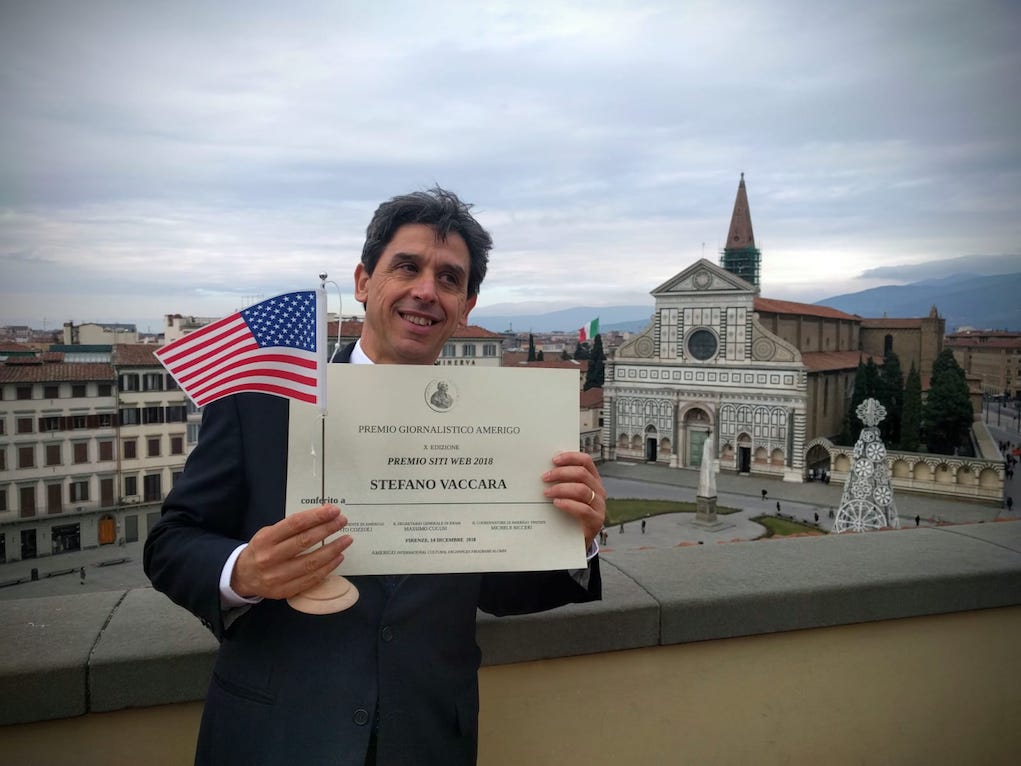 Our Publisher-partner for Italy, Emilio Pursumal, accepted the award at the General Consulate of the United States in Florence (Foto VNY)_ 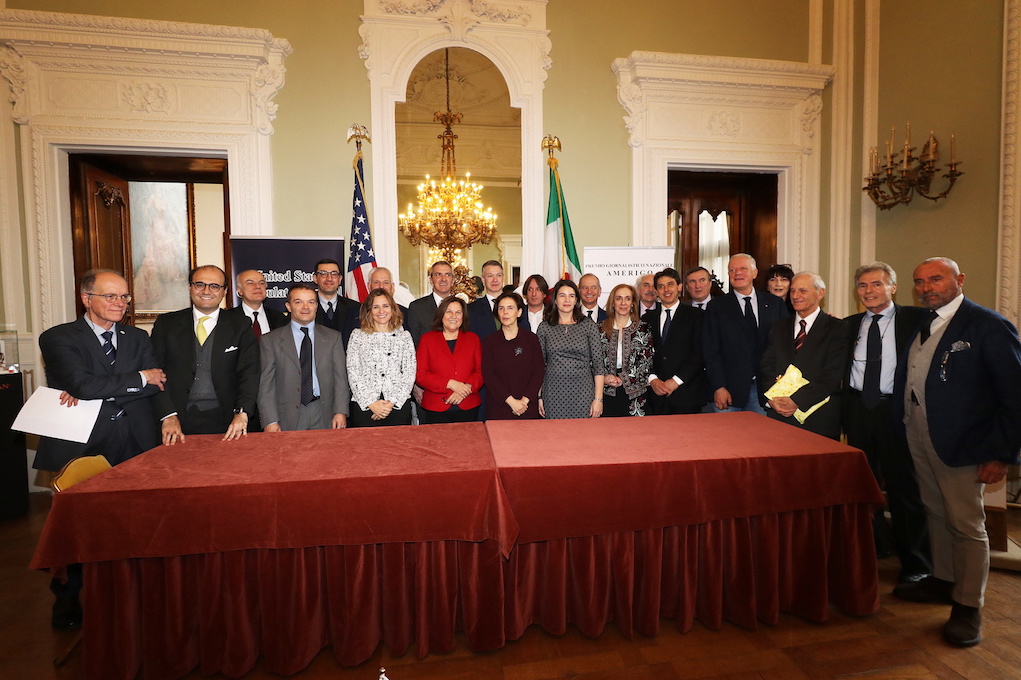 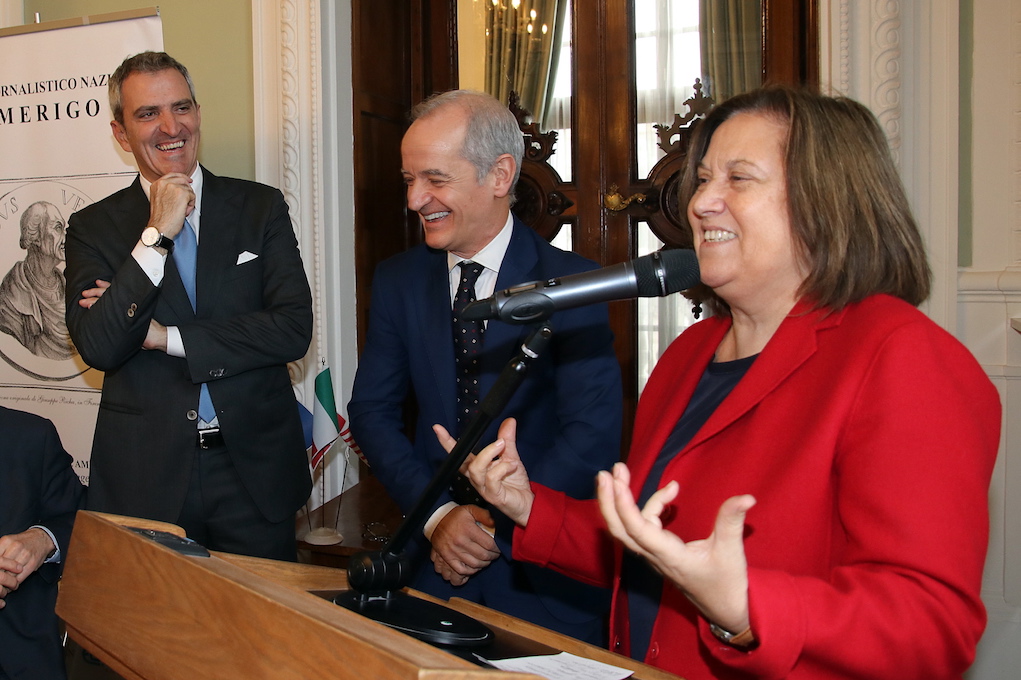 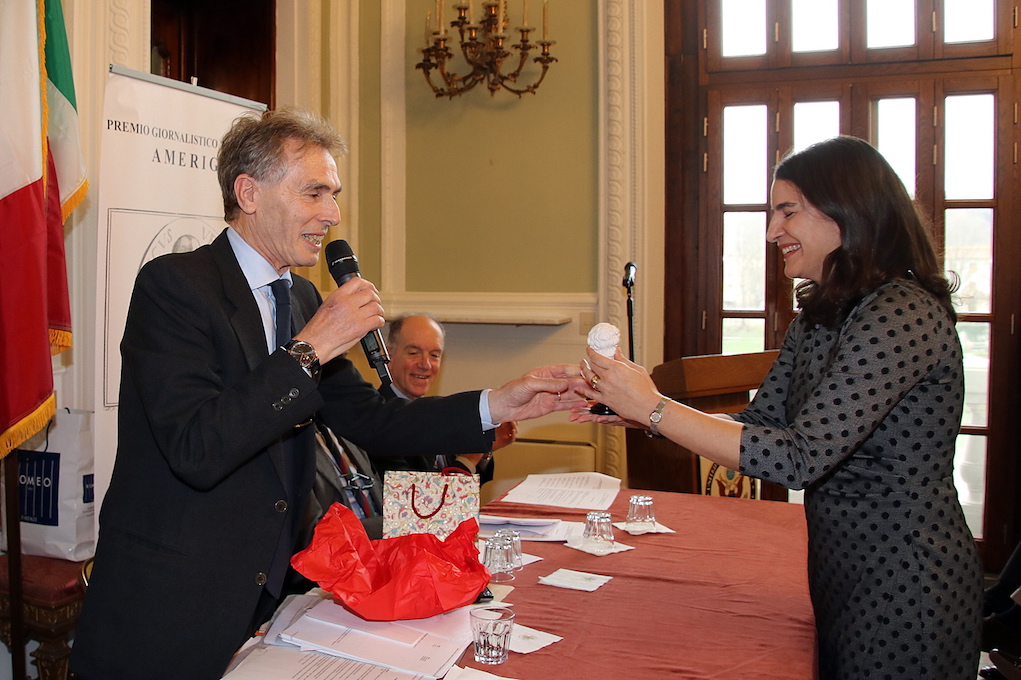 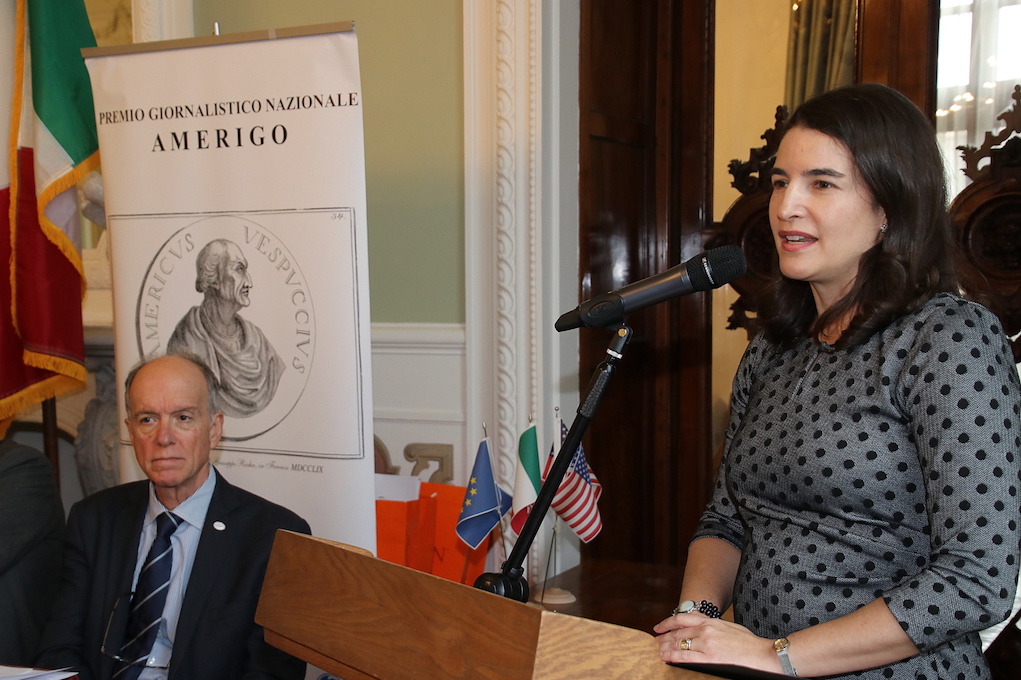 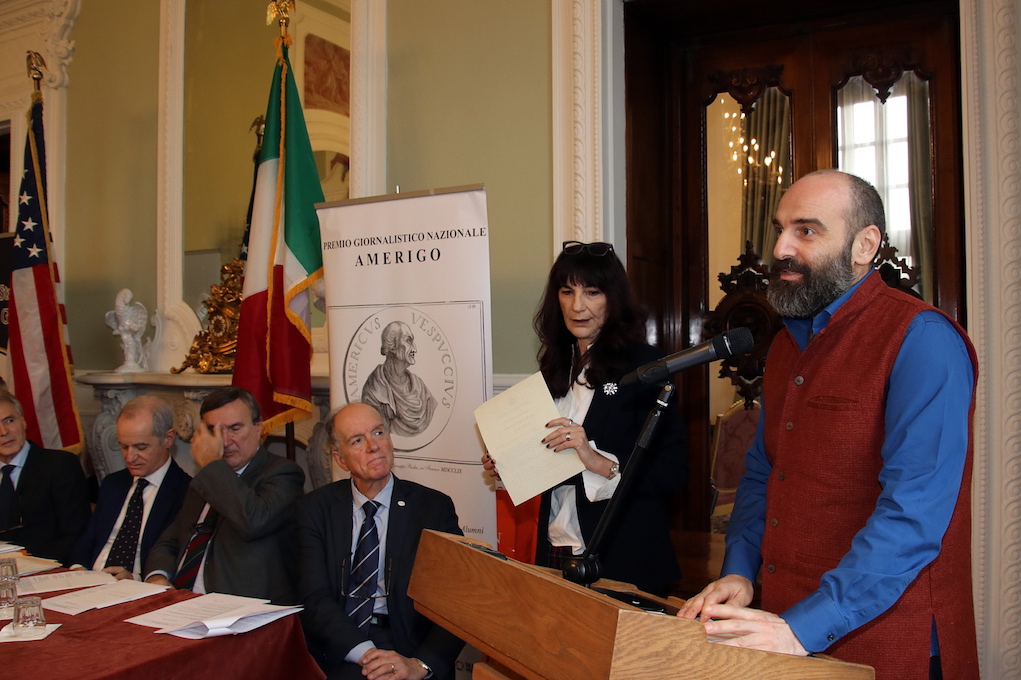 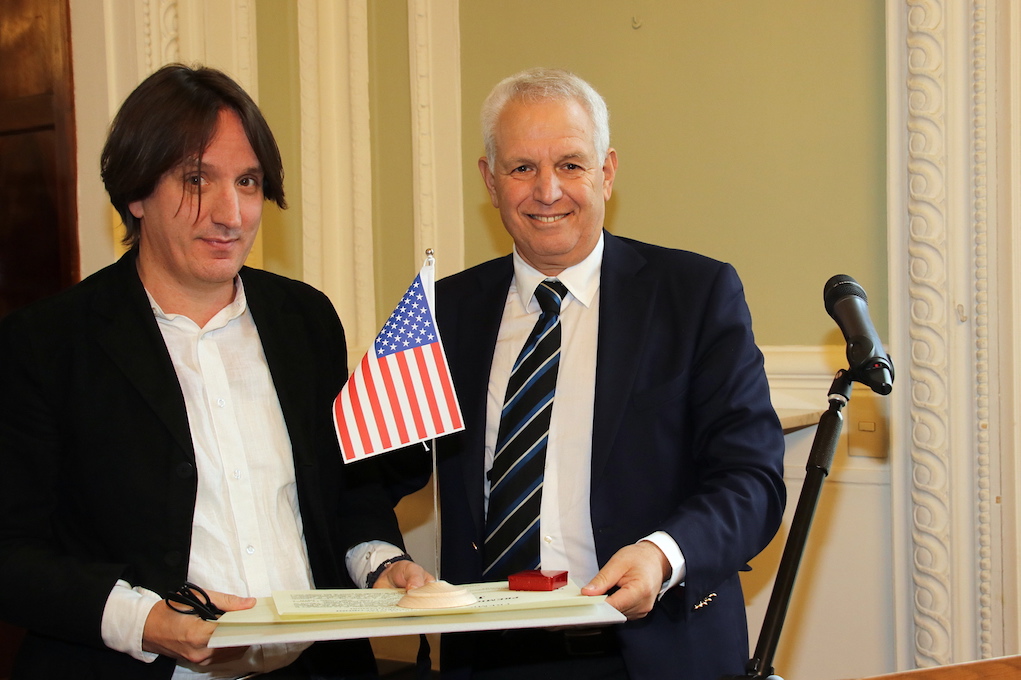 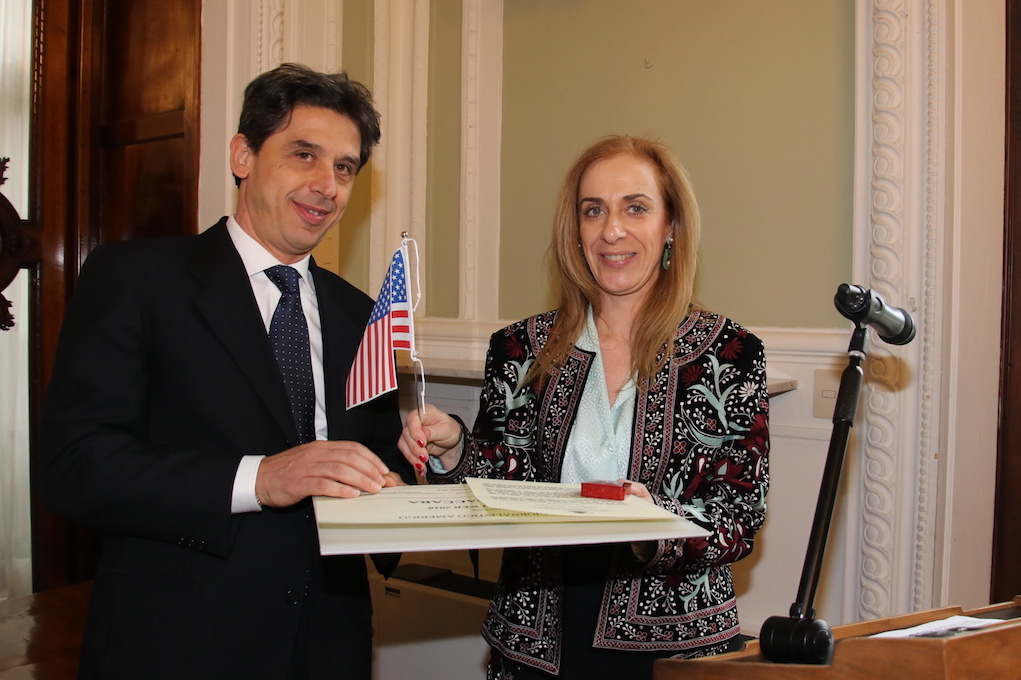 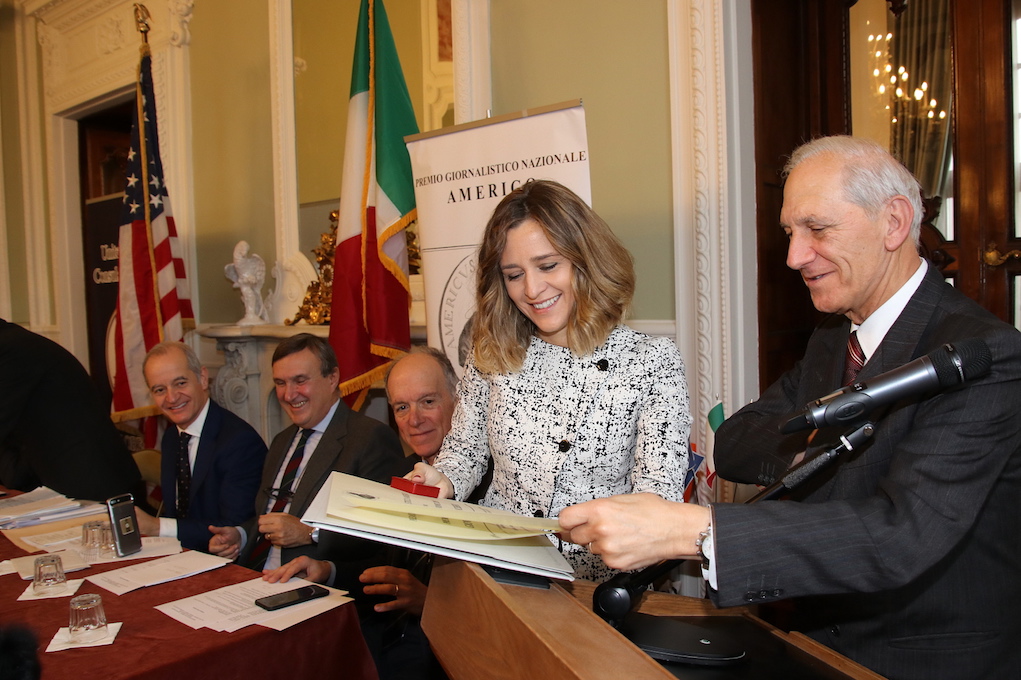 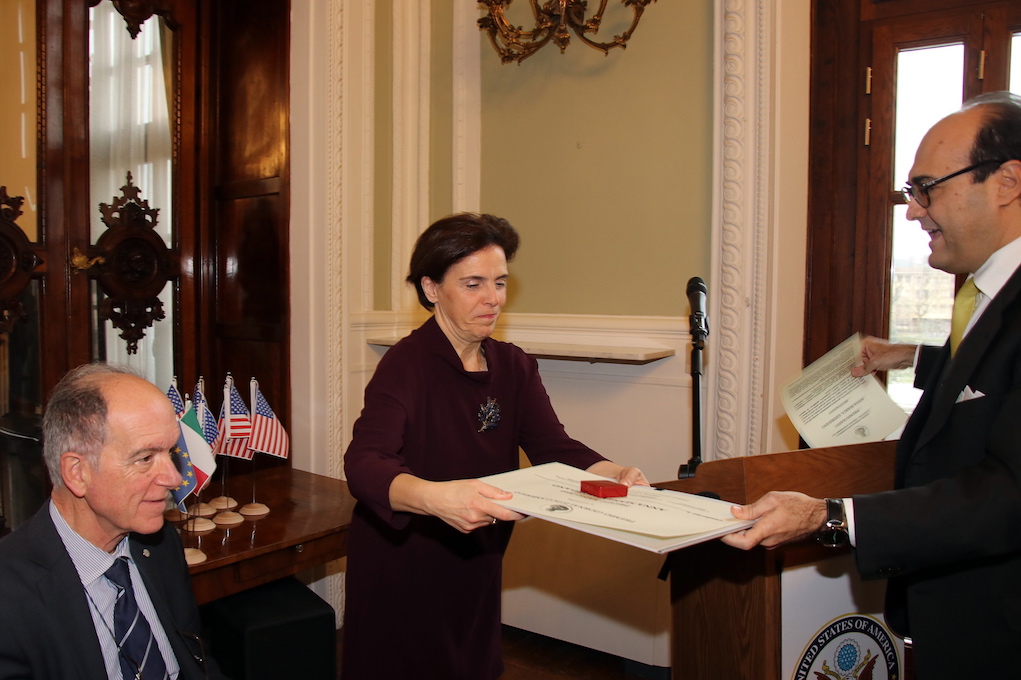 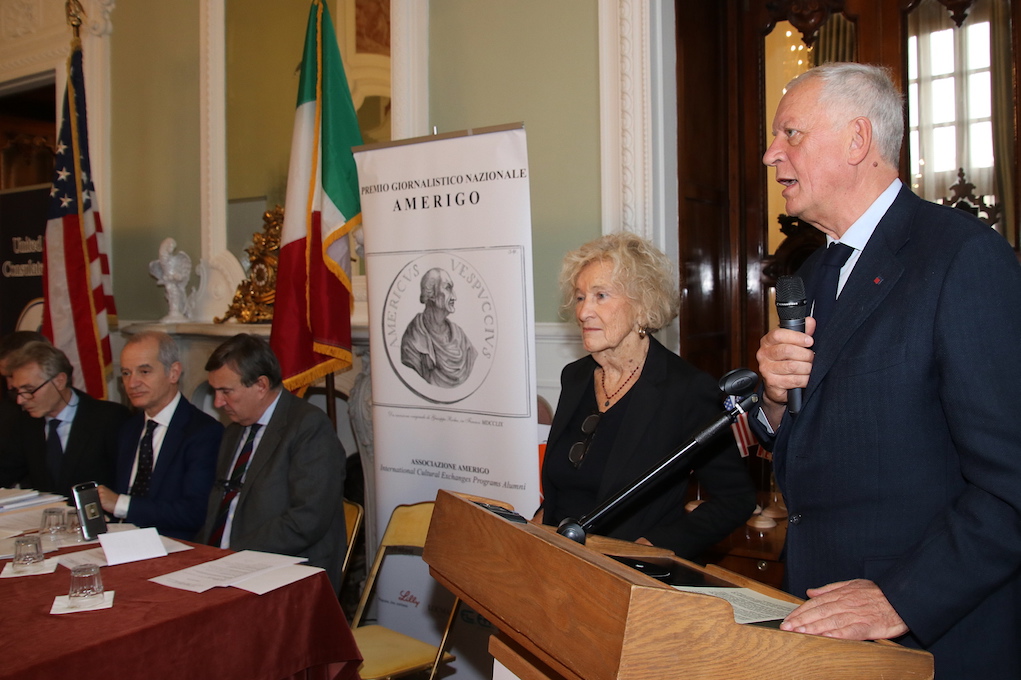 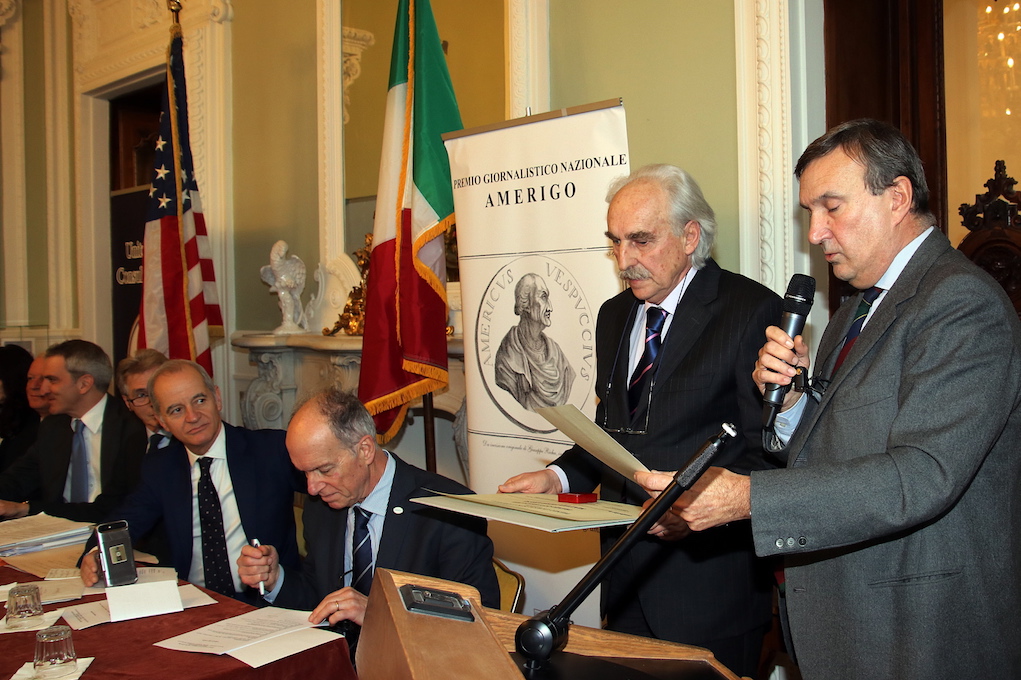 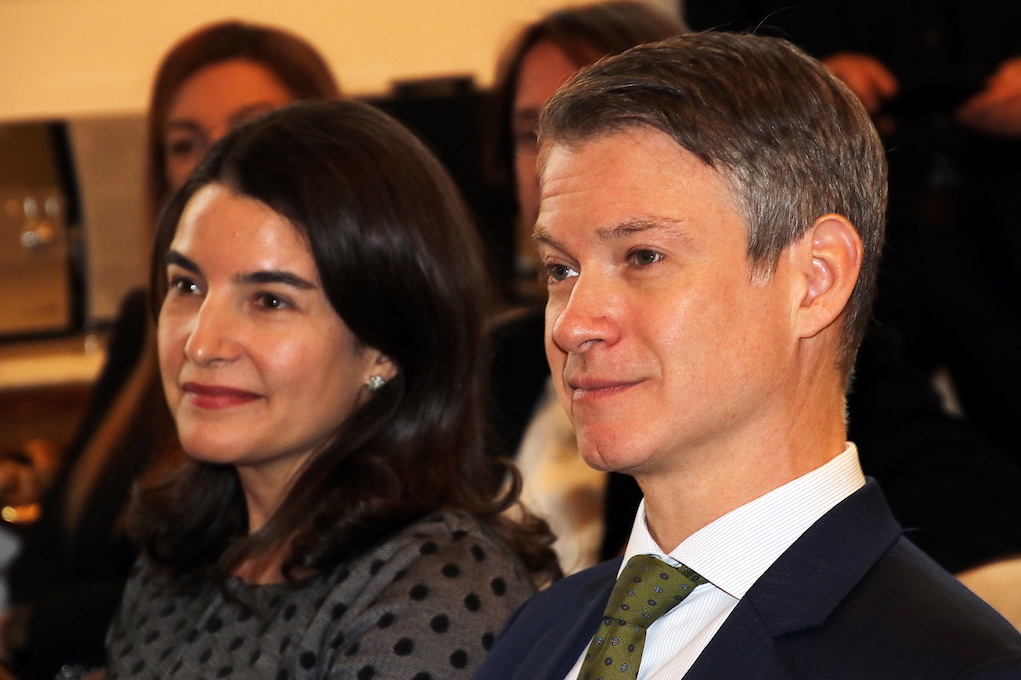 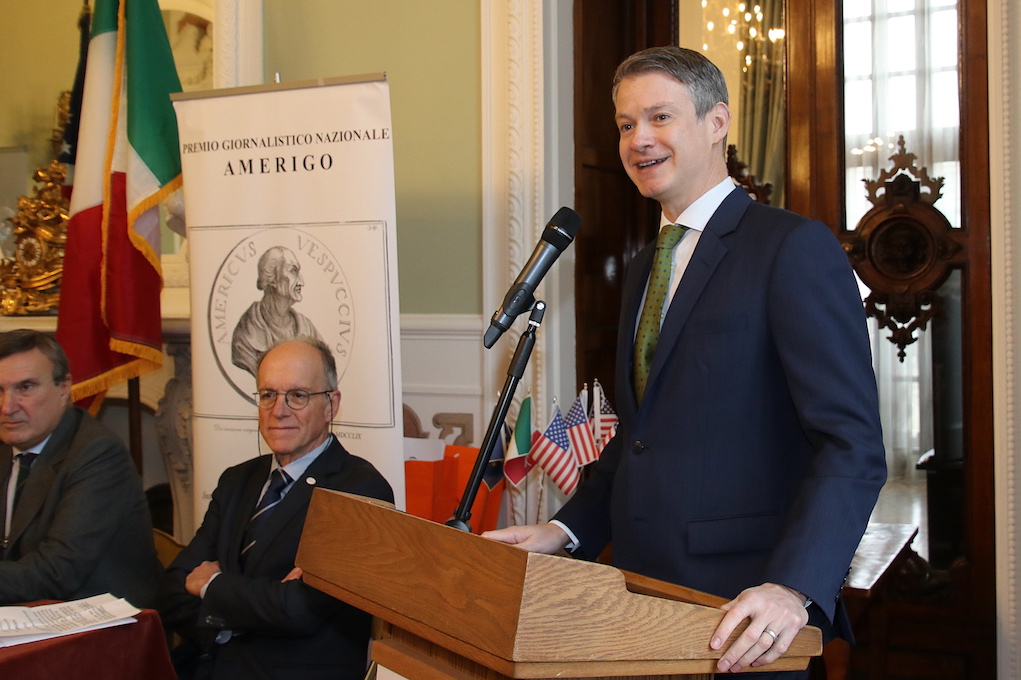 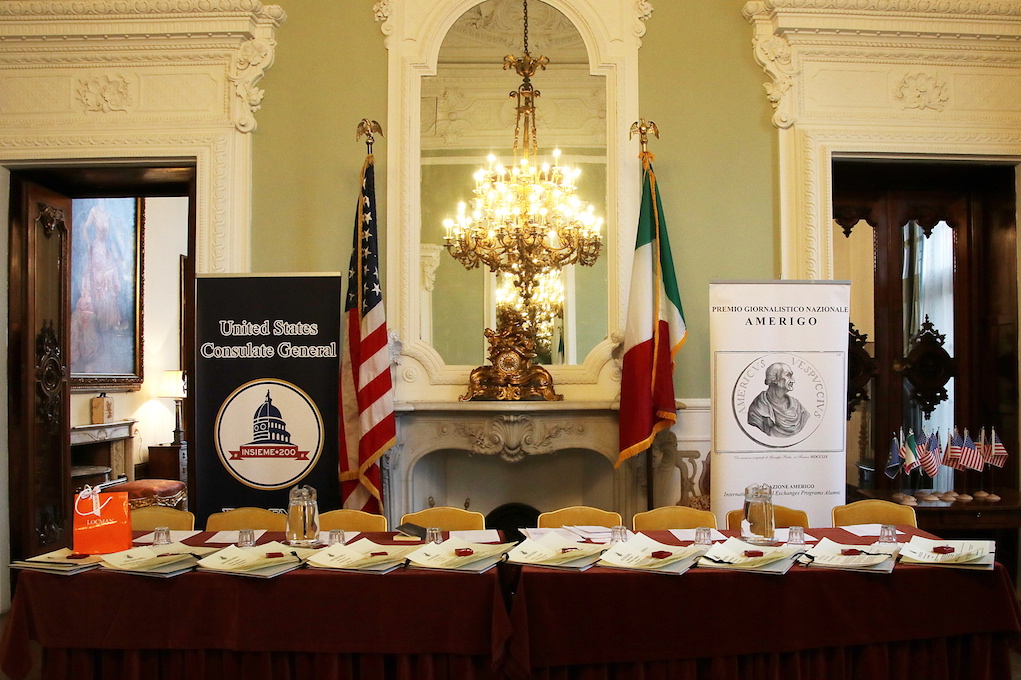 Leggi in italiano
The evening prior, the recipients of the award were invited to a welcome dinner with the U.S. ambassador Lewis M. Eisenberg, who had come specially from Rome. During the dinner, Eisenberg stressed the importance of freedom of expression and of the press. To Lucia Annunziata (Huffington Post) the Special Amerigo Award. Our Editor Stefano Vaccara has been awarded the 2018 Amerigo award for journalism for the category “websites.” In its tenth edition, the Amerigo award, bestowed at the American diplomatic residency in Florence, is a moral acknowledgement of those journalists and editorial teams that report on the US and American culture to an Italian public. “La Voce di New York”, as stated, has won the award for websites, a recognition assigned to Vaccara, as is outlined in the presentation speech of the award, in his role as “Founder and Editor-in-Chief” of our “online English- and Italian-language newspaper, an online media intended for readers in Italy and across the world, in this way functioning as an editorial experiment without precedent in Italian journalism.”

This prestigious award was bestowed on Friday, and the ensuing ceremony in honor of the recipients in the splendid setting of Palazzo Canevaro, the headquarters of the American consulate was hosted by the General Consul of the United States in Florence Benjamin V. Wohlauer, the president of Amerigo Vito Cozzoli, and the secretary general of ENAM (European Network of American Alumni Association) Massimo Cugusi. The evening prior, the recipients of the award were invited to a welcome dinner at the restaurant La Spada, with the ambassador Lewis M. Eisenberg, who had come specially from Rome. During the dinner, Eisenberg stressed the importance of freedom of expression and of the press. The next morning at the consulate, both the Consul General Wohlauer and the spokeswoman for the U.S. Embassy in Italy, Lillian deValcourt-Ayala, also emphasized the importance of a responsible press and of a free and transparent environment for journalists.

In her presentation of the award, Lawyer Rosa Giovanna Barresi of the Amerigo Association recognized Vaccara’s achievements: “Receiving his education from the Universities of Siena and Boston, author of papers on recent American history,” she stated, “Vaccara has collaborated with some of the most esteemed news sources in Italy (including Il Foglio, Il Giornale, Panorama, and others), served as the political commentator for the daily newspaper America Oggi,” the only “Italian-language newspaper compiled and published in the United States, and has also served as the director of the weekly US-Italia.”

“Vaccara has been the correspondent of Radio Radicale for the United Nations for eight years,” the official acknowledgment details further, “during which he conceived and actualized the idea of a digital newspaper aiming to be the Italian voice in the world and the source of information on major international facts and events for Italians.” The recognition of the achievements of Stefano Vaccara for the Amerigo award for La Voce di New York: on the left, Emilio Pursumal, and on the right, Rosa Giovanna Barresi

Present at the ceremony to receive the Amerigo award on behalf of editor-in-chief Vaccara was Emilio Pursumal, La Voce di New York’s Publisher-partner for Italy, who moreover in 2016 along with Antonio Giambanco, was responsible for the new graphic design of the site.

The editor Stefano Vaccara, in his acknowledgement, stated: “I am extremely honored and thankful for the respected Amerigo Award, which is perhaps most appropriate as a recognition of the role of La Voce di New York as a tool to inform Italians about the United Space and vice versa. I share this award with all my remarkable collaborators, both at the UN headquarters and all over the world, who, every day for the last five years and with no small effort, have been able to strengthen the Italian voice both at home and abroad. I dedicate this award to Antonio Megalizzi, the Italian journalist killed in the terrorist attack in Strasbourg.” The Amerigo Award, conceived in Florence in 2009, recognizes those journalists who write about the United States for Italians and who, with their diligent day-to-day work, contribute to an increased awareness of and knowledge about the United States in Italy. In order to help identify which journalists to award, Amerigo relied on the precious collaboration of journalists Piero Meucci and Cristina Lombardi. On the occasion of the tenth anniversary of the Amerigo award, a publication will shortly be presented dedicated to the almost one hundred journalists awarded between 2009 and 2018, realized by the Florence chapter of Amerigo, which is coordinated by Michele Ricceri, the organizer of the award since its inception. The award is organized thanks to the voluntary work of the members of Amerigo along with the support of the United States embassy, and is sponsored, since its first edition, by Locman Italy, the manufacturers of wristwatches of the Isola d’Elba. The Amerigo Association, with its legal headquarters in Rome in the United States embassy, brings together Italian international visitors, or those who participated in the cultural exchanges promoted by the US State Department (Bureau of Cultural Affairs.) An image from the ceremony in the US Consulate in Florence, during Emilio Pursumal’s speech

The Amerigo Association serves the Italian alumni of the international cultural exchange programs, in their various articulations, promoted by the US State Department (Bureau of Education and Cultural Affairs). Founded in May 2007 thanks to the initiative of the eight founding members, all coming from the Italian academic, editorial, journalistic, institutional, or political spheres, the association aims to provoke exchanges of knowledge as well as personal and professional experiences, acquired in the United States, between its members in order to realize projects together.