This March, the Venetian Jewish Ghetto will celebrate its first 500 years with exhibitions, conventions and guided tours, but the history of the old cemetery testifies to the presence of Jews in the lagoon dating back at least two centuries

A long time ago, the Jewish cemetery on Venice’s Lido island was Navy Captain Aldo Izzo’s childhood playground. It was the perfect place where he and his brother Alberto could run after each other around the gravestones without being disturbed. No wonder that decades later, after spending several years sailing around the world, he felt he had to do something to stop the decadence of the ancient part of the cemetery, a precious jewel of Jewish heritage.

Today he is the only guardian of the cemetery, or the guardian angel, as many dubbed him due to his dedication in preserving the place. “One can’t understand the integration of the Jewish community in Venice without coming here – says the eighty five years old Mr. Izzo, an elegant man, speaking with a deep voice and the key of the cemetery in his hand – There are so many stories intertwined with one another that you always discover something new”.

Indeed, from the initial desecration of the graves to the rebirth of the place in the Romantic period, the old cemetery has a lot to say to the today’s visitors. In 1984, the cemetery was in such a state of neglect that the first signs of the Jewish presence in Venice risked to be erased and to be buried in the wilderness Roots were knotted around the graves and the whole garden resembled a carpet of weeds. Mr. Izzo took the matter to heart, but at that time, City Hall had no money available for restoration work. At the end of the Nineties the history of the cemetery changes its course. Save Venice, a New York-based non profit association with an office in Venice headed by Melissa Conn, received a huge donation by the U.S. Jewish Community which was promptly put to use to restore the old Jewish cemetery. 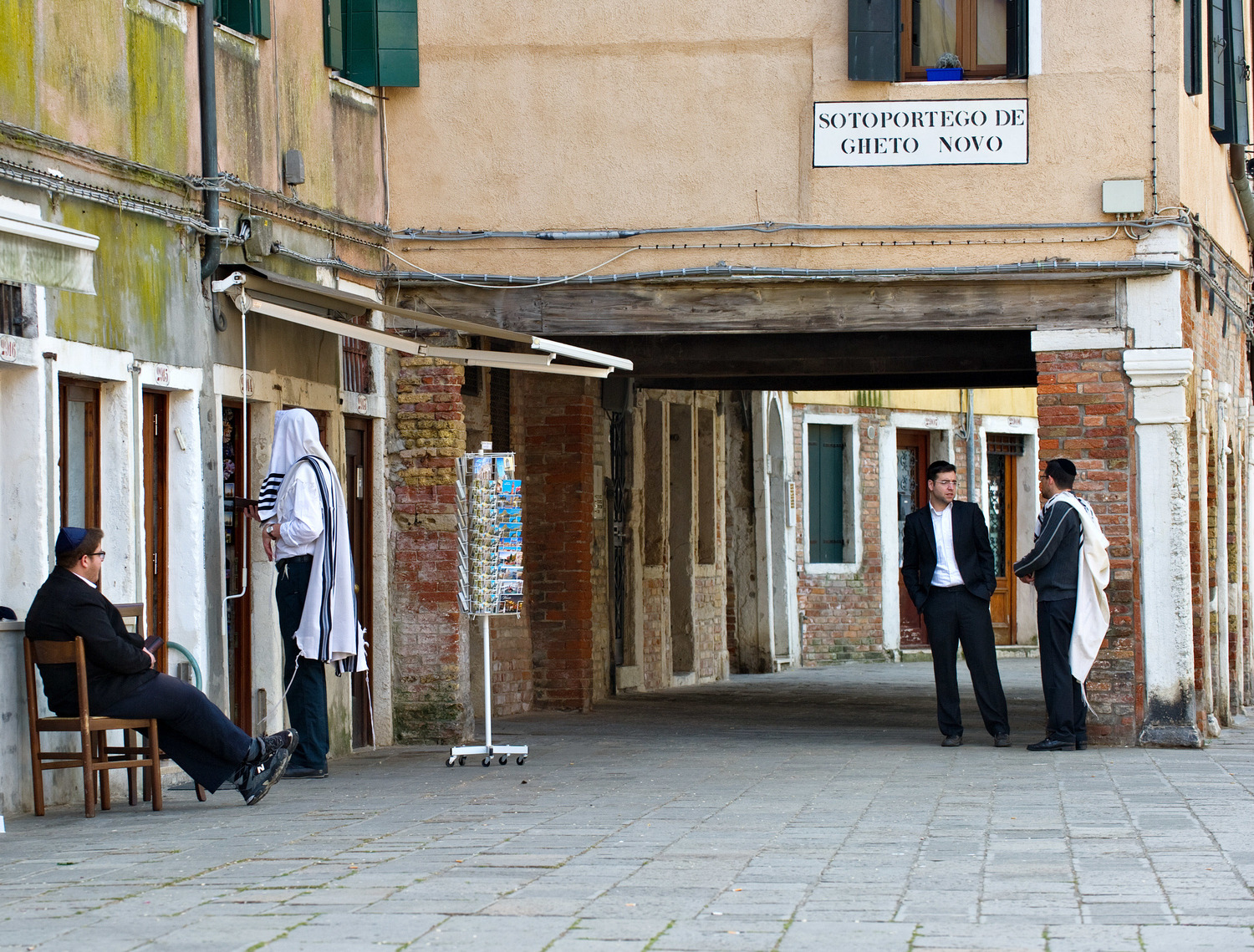 A view of “Ghetto Novo” in Venice.
Photo: ©Awakening/Xianpix

The celebrations of the 500 years anniversary of the Venetian Ghetto will start exactly on March 29th 2016, but the Jewish presence in the lagoon actually dates back to much earlier. One of the most irefutable pieces of evidence is the old cemetery, created on September 25, 1386.

The presence of Jewish settlements in the area goes back to the year 1000 but 1516 is the date when the Jewish community was forced by a decree to live together in a gated quarter which had to be locked during the night. The place was found near a foundry, from which the word ghetto comes from. “Since they were only allowed to work as bankers – Mr. Izzo explains – and hence they managed a lot of money, in the beginning they also wanted to be enclosed, in order to be more protected”. That rule ended only with the arrival of Napoleon, in 1797.

The remains of the cemetery are but a tiny fraction of what was a huge area in the past. However, several gravestones of some of the most important Venetian Jews survived, such as the famous rabbi Leone da Modena (died in 1648), poetess Sara Copio Sullam, who used to hold literary gatherings with intellectuals from Venice and Padua (died in 1641) and erudite scholar Elia Levita (died 1549). The most ancient tomb belongs to one “Samuele, son of Sansone”, who passed away in 1389 (5150 of the Jewish calendar). Low reliefs carved on the gravestones portray scenes from the life of the dead person or from the Bible, or they even represent symbols associated with the profession or the family name. For instance, two opened hands indicate that the buried person was a priest, while fishes signify that the deceased was an astrologist. A crown is associated with the Torah, the tower means “God as fortress” and the stars with the sea represent the mystical teachings, known as Kabbalah. A staircase is normally portrayed on the gravestones of the Sullam family, the meaning of the name in Hebrew. Here there are also several Spanish Jews who fled Catholic’s persecution and Inquisition. Castile’s lion, helmets and little angels on the graves identify them.

On one of the gravestones we can see a hammer on an anvil, which means that the man was a blacksmith. A long time ago William Hallow, professor from Yale University, contacted Mr. Izzo. He was looking for this particular gravestone because he was writing a book on his family and the blacksmith was part of his genealogical tree. This March, the Venetian Ghetto will celebrate its first 500 years with exhibitions, conventions and guided tours, but the history of the old cemetery testifies to the presence of Jews at least two centuries before

“The problem was that I had never seen this tomb – explains Mr. Izzo – He showed me an old picture portraying his mother in this cemetery, close to this symbol”. But when restoration work began they found it, covered by roots in a corner of the garden. Mr. Izzo called Prof. Hallow and he came immediately from America to take a picture. They discovered that the blacksmith was from Prague and wanted to go to Jerusalem but stopped in Venice for a while where he died.

The cemetery is in the northern part of the Lido island, with its entrance by the lagoon waterfront. It covers a surface of 33,000 square feet and hosts 1400 gravestones. But there are also another 12,000 which have fallen beneath the first layer of earth and are proving challenging to rescue. During excavations in the surrounding area, it is frequent to find tombstone remains, even intact ones. The stratification detected on the stones tells us of the unimaginable vicissitudes that the persons buried there had to suffer before resting in peace. The first document that confirms the presence of a Jewish community in Venice dates back to 1234. In it, the Doge Pietro Candiano I accepted the request of many German Jews who wanted to settle in the lagoon, with the condition that they convert to Christianity. Twenty years later, the most important political institution of the Republic of Venice, the Maggior Consiglio, forced the Jews to go to the mainland territory, outside the lagoon. That was a very hard period for them, as travelling everyday to Venice by boat took hours and hours of effort, often with bad weather and fog. A Jewish bakery in the Venice Ghetto. Photo: ©Awakening/Xianpix

It was only in 1384, when the war against the Republic of Genoa ended, that Jews were allowed back in Venice, but this time with a precise mission: to be bankers. War had dried out the republic’s coffers and the city needed cash flow to revitalize its economy. Jews were considered qualified to do this job since, in the Bible, Deuteronomy (chapter 23; 20-21) states: “You can lend money with interest to a stranger but not to your brother”.

When they returned to Venice, Jews asked for a place to bury their dead. In 1386, the Venetian Magistrature agreed to give them a remote cemetery in the Lido, far from the trade of Venice.

At that time, there was nothing on Lido island but a Benedictine Monastery established in 1043. When the monastic order realized what was going on, they denounced both the Jewish Community and the Venetian Magistrature, but eventually lost the trial.

The situation was growing increasingly heated. When the burials started, the farmers who cultivated the fields around the Monastery – probably encouraged by the monks – committed acts of desecration. The gravestones were destroyed and body parts were scattered everywhere. “Exhumation is forbidden in our religion – Mr. Izzo explained – So, in addition to the chaotic situation, there were these acts of sacrilege”. As the Jewish community grew, integrating into Venetian daily life, the conflicts with the monks diminished but the problems continued.

Since one side of the island faces the sea, in war times Lido was Venice’s first line of defense. On many occasions, and especially during Napoleon’s invasion, the soldiers removed the gravestones and replaced them randomly. Because of that, the Jewish Community asked the Magistrature for a new cemetery. Their request was finally granted in 1774. Nowadays that cemetery is still in use and it is located close to the old one. An internal view of a synagogue in the Jewish Ghetto of Venice.
Photo: ©Awakening/Xianpix

The old cemetery was abandoned and was overtaken by nature, until the 19th century when the great Romantics – Goethe, Shelley, Lord Byron, Théophile Gautier – discovered it. No poet or writer could resist the garden’s charm, with its gravestones surrounded by roots. Giovanni Prati in Ermenegarda wrote that lovers met there secretly and legends began to take form, including the one which says that Shylock’s ghost – the character of Shakespeare’s Merchant of Venice – wandered in the old cemetery, complaining about its decline.

No one took care of it until the beginning of 1900, when the Lido became a popular tourist destination. In this period the Excelsior and Des Bains Hotels were built and thalassotherapy started to be used in the hospital of the island. These new attractions transformed the island into one of the most fashionable sites for travellers. In this context, why not also capitalize on the old cemetery? No sooner said than done, some gravestones were placed upright, without paying attention to the dates, and the cemetery was ready for visitors. Nevertheless, it still needed to be restored. Only in the Eighties this began to be seriously considered. “All the people say that Jews have money but we didn’t! – Mr. Izzo said – So, what could we do? For 25 years we tried to find money. In 1998 both the City and the Veneto Region gave us 150 millions of old liras, but it was not sufficient. We needed at least 800! By persisting, American Jews, especially from New York, helped us, thanks to the Save Venice non-profit organization”.

A guided tour of the old cemetery will be among the 500 years special proposals. Mr. Izzo, the guardian angel, is always available to accompany people through the centuries. Today, where once there was a swamp and mud, one can walk among laurel, beeches and acacia trees, while looking at the skyline of Venice and Saint Mark’s Square. Not far from the old cemetery is the new one, with some of the oldest tombs restored. Inside, in a little house, the warden and artist Artemio Tagliapietra has been living for the past 25 years with his cats Hansel and Gretel. “All in all, the cemetery is a good place to stay – he says with a smile – Sooner or later everyone comes here”.