An enchanted dinner with an amazing view. Imàgo, La Terrazza, Mirabelle, Giuda ballerino!, Aroma and La Pergola: there’s no better way to view the Eternal City in all its glory than from one of its many romantic rooftop restaurants.

Most cities around the world boast numerous skyscrapers and many of these hugely tall buildings house restaurants with panoramic views on their top floors. Because of its underground rivers, Rome has no skyscrapers, but it nonetheless hosts numerous rooftop restaurants.

With summer around the corner, there’s no better way to view the Eternal City in all its glory than from one of its many romantic rooftop restaurants. The rooftoprestaurants website presents an exhaustive list of all the best rooftop restaurants organized by neighborhood, so that you can easily find the nearest ones to you. However, I’ve narrowed it down to the six best ones, even though they’re for very special occasions only. All have one Michelin star except La Pergola, which has continuously been awarded three stars since 2005. It’s still the only restaurant in the Eternal City with three Michelin stars.

The first one on my list is Imàgo, the oldest rooftop restaurant is Rome. In 1956, German-born Oscar Wirth, scion of a Swiss and German hotelier family and owner of the luxurious Hassler Hotel at the top of the Spanish Steps, resolved to cover the terrace, thus creating Rome’s first panoramic restaurant. Initially considered a controversial move, it went on to welcome scores of Italian and international V.I.P.s as regular guests. Sixty years after his father’s innovation, Roberto, one of the world’s few remaining independent-owner hoteliers, entirely renovated the restaurant and renamed it Imàgo. That same year he hired Neapolitan Francesco Apreda as Imàgo’s Executive Chef. Apreda had risen through the ranks at The Hassler and, when working elsewhere, remained under Roberto’s benevolent surveillance. He revisits traditional Italian flavors with a touch of exoticness, influence by his time in both Japan and in India, where he and Roberto were consultants to two Italian restaurants in Oberoi hotels: Vetro in Mumbai and Travertino in New Delhi. Recommended: Breaded scallops with shitake mushrooms and black truffles and Duck Tandoori-style. In the past, the Wirth family also owned the nearby Eden Hotel, today owned by the Dorchester Collection. It reopened a month ago, on April 1st, after nearly two years of complete refurbishment. Farther uphill at the top of Via Veneto in The Splendide Royal, one of Roberto Naldi’s six five-star “unchained” hotels, like the Hassler, is the Mirabelle, overlooking the Villa Borghese Park and the Vatican (the other five are the Splendide Royal and Grand Hotel Eden in Lugano, the newly-opened Splendide Royal in Paris, and the Mancini 12 and Parco dei Principi Grand Hotel and Spa in Rome). The Executive Chef here is Roman Stefano Marzetti, who’s previously worked in a Forte Village in Sardinia, at two Relais & Châteaux properties in Tuscany, Villa Arceno and Borgo San Felice, at Rome’s prestigious Antico Arco on the Janiculum and at La Pergola. Recommended: Risotto with foie gras and liquorice powder.

Instead, at the bottom of Via Veneto in the Bernini-Bristol Hotel is Giuda ballerino! only open for supper. The Executive Chef here is another Roman, Andrea Fusco, who worked with world-famous top chef and TV star Gianfranco Vissani, the owner of his namesake restaurant Vissani (once three, now two-Michelin-star) in Baschi, Umbria, near Orvieto. Recommended: Sea bass with frozen raspberries.

Farther afield in the 17th-century Palazzo Manfredi, built on the site of a long-ago-disappeared gladiator barracks, there is Aroma, recipient of the 5-star Diamond Award from the American Academy of Hospitality in 2016. It looks out directly on the Colosseum, so book a table to watch the sunset. Like Marzetti, Executive Chef Giuseppe Di Iorio worked under Giuseppe Sestito at Mirabelle. 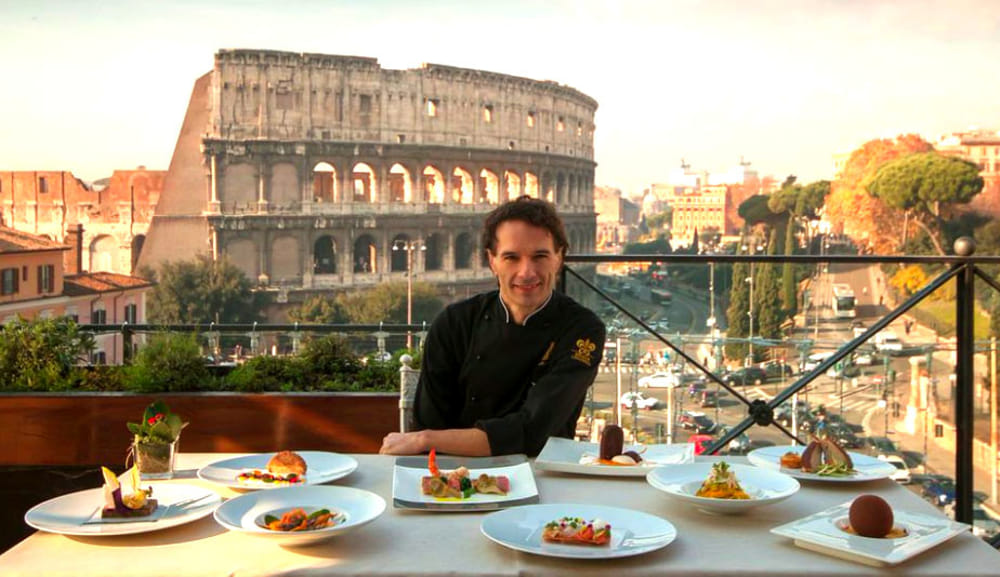 Recommended:”Ponza” sea bream in tomato “guazzatto”, sea urchin, baby squid and yellow potato. For a more laid-back and informal meal at more moderate prices, but with the same talented chefs and still a view of the Colosseum, you can eat across the hall at Aroma Bistrot. Last, but certainly not least, is the extra-special La Pergola, only open on evenings and closed on Sundays and Mondays, impeccably managed by Simone Pinoli, so book well in advance. Its Bavarian health-conscious Executive Chef Heinz Beck owns two other restaurants in Italy: Café Les Paillotes in Pescara and Heinz Beck Season at Castello di Fighine near Siena (one Michelin star). HE also owns one in the Algarve, two in Dubai and two namesake restaurants Heinz Beck and Sensi by Heinz Beck in Tokyo. He’s also developed a line of sauces with the Abruzzese pasta-maker De Cecco. All of Beck’s cooked-to-order dishes are unique works of art, especially his “Garden of Water” and his “Sun.” In addition, La Pergola’s cellar, under the tutelage of Sommelier Marco Reitano, abounds with over 53,000 bottles, dated from 1888 to the present, and its dining room service is synchronized like a ballet performance at the Bolshoi. Not to mention the after-dinner adjoining “Cigar Lounge.”

Nota Bene: Wherever you choose, don’t forget your camera to record your very own enchanted evening. Then, back home, you can also revisit Imàgo, The Hassler, Francesco Apreda and his recipes in the volume “Apreda at Imàgo: Haute Cuisine on Rome’s Rooftops” by journalist and food critic Antonio Paolini. It’s available in Italian or English at the Liberia Coletti. As for Heinz Beck, you can purchase his several volumes “Heinz Beck,” “Heinz Beck on Pasta,” “Finger Food” and “Vegetarian” in English or Italian, “Arte e Scienza del Servizio” and “L’ingrediente segreto: la filosofia e le passioni di un grande maestro del gusto,” available only in Italian, from bibliotheca culinaria.