Italy and the Netherlands' solution to split the seat of the non-permanent 2017-18 term of the UN Security Council may be a potential sign for greater unity of the EU in the UN. Leaders hint at a European Union seat on the UNSC. Historically, splitting a non-permanent seat in the Security Council was actually a common practice in the late 1950s through the mid-1960s

In the midst of a messy scene on the floor of the General Assembly vote for the non-permanent Western European spot on the Security Council on Tuesday, Italy and the Netherlands actually came together in compromise: they will split the two-year term on the UN Security Council.

Sweden won the first of the two Western European spots by a comfortable margin–with 134 votes out of the 128 necessary to be elected into the position. Italy and the Netherlands on the other hand got 113 votes and 125 votes respectively in the first ballot. Then after a scramble to gain votes on each side the nations found themselves tied on the sixth ballot at 95-95, a dangerous situation for both countries because after the fourth ballot a European newcomer may come into the race which could break the impasse if member states just want to get the decision over with.

In a unifying effort the two European nations proposed to split the term–Italy will serve the first year and resign at the beginning of 2018 for the Netherlands to take over. The General Assembly continued proceedings on Thursday and with a 179 vote majority Italy was officially elected into the Security Council with a GA endorsement for the compromise with the Netherlands.

“An honor for Italy, a great agreement with Holland,” wrote the Italian Minister of Foreign Affairs Paolo Gentiloni on twitter after the vote. “There is great satisfaction for this result that comforts the decision made on the political level during the frantic events of Tuesday,” commented the Italian Ambassador Sebastiano Cardi, permanent representative to the United Nations. “This choice is innovative for the unity of Europe, understood and admired by all the member states of the United Nations. This solution is an example of cooperation between nations for the benefit of the international community which must confront grave challenges.” 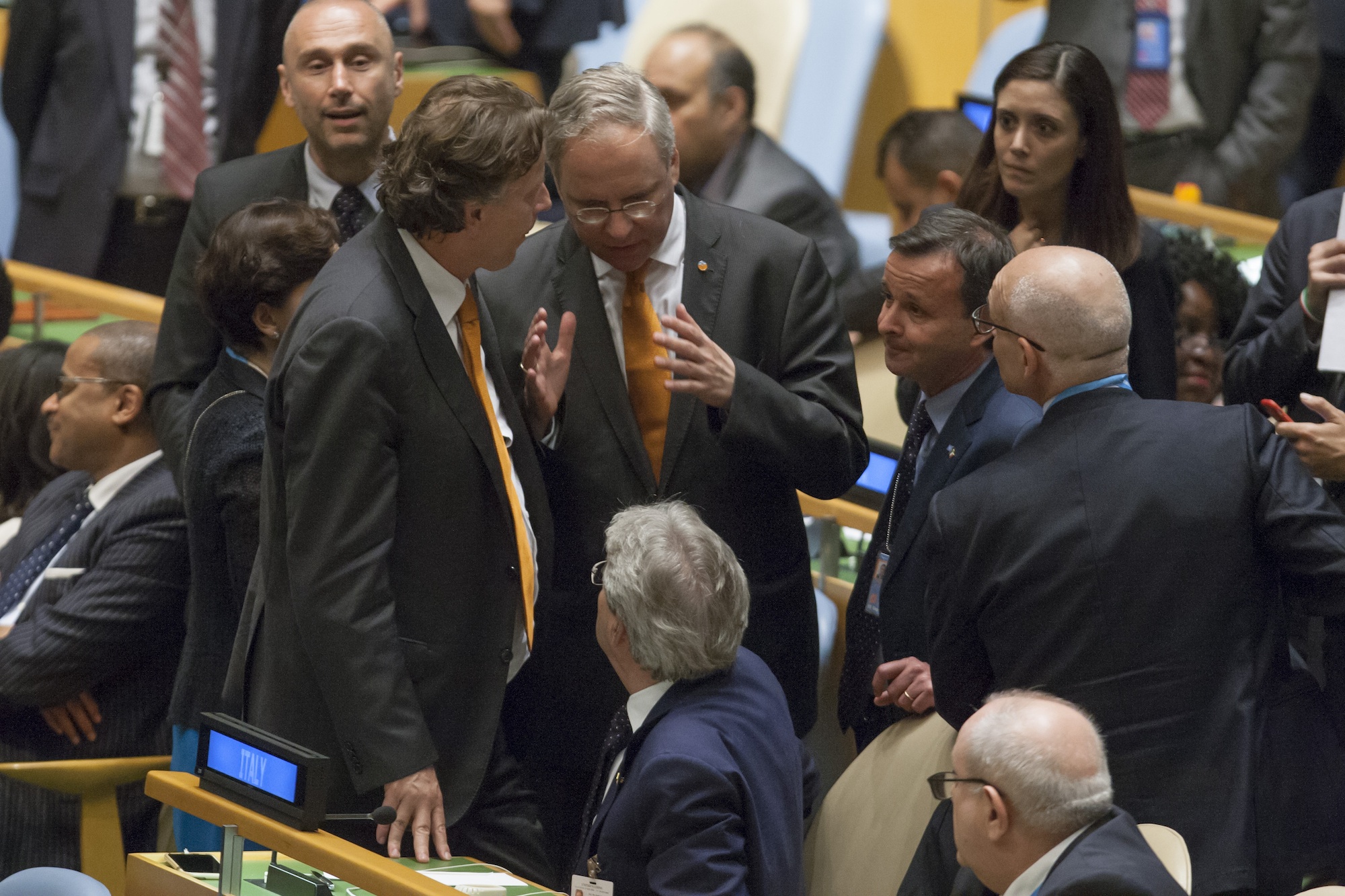 Italy and the Netherlands negotiating after five rounds of voting, vying for the last remaining seat

Italian Foreign Minister Paolo Gentiloni had told the General Assembly on Tuesday, “It will be an honor for Italy to serve in the Security Council in 2017 and to cooperate with the Netherlands serving in 2018.” He had added that this deal could “send a message of unity between two European countries,” only days after Britain voted to leave the European Union.

Historically, splitting a non-permanent seat in the Security Council in the late 1950s through the mid-1960s was actually a common practice before the council expanded. For example, in 1955 the Philippines and Yugoslavia decided to split the term informally after 30 rounds of voting where Yugoslavia would serve the then one-year term, while the Philippines would then run uncontested the next year. The 1960-61 term was split between Turkey and Poland, and the 1962-63 term between Romania and the Philippines.

However, this year may be the spark of new practice among European countries in the UN. It is rumored that European nations may decide to no longer function in the Security Council unilaterally, but rather to make decisions as the European Union.

Both Minister Gentiloni and Dutch Foreign Minister Bert Koenders in the stakeout after Tuesday’s GA vote stressed the need for unity in the United Nations, especially between European countries, and that their compromise is a good sign. “I think it’s a signal also of European cooperation in foreign and international affairs that we together came up with this solution in which we will closely cooperate during those two years,” said Minister Koenders.

Are Gentiloni and Koenders hinting at possible change in the UN Security Council? Will EU members in the UN decide to work together for their united interests in the coming years? Nothing is concrete yet, but this is a speculation worth watching as the international landscape shifts–perhaps towards unity.