She [UN human right chief Bachelet] explained that “even for short periods under good conditions,” the detention of children “can have a serious impact on their health and development.” Furthermore, Bachelet stated that “according to several UN human rights bodies, detaining migrant children may constitute cruel, inhuman or degrading treatment that is prohibited under international law.” The High Commissioner’s condemnation of the US border detention facilities comes just days after the release of the report by the US Department of Homeland Security’s Office of Inspector General. The report called for “immediate attention and action” to the “dangerous overcrowding and prolonged detention of the children and adults in the Rio Grande Valley” detention centers.

This past Monday the UN High Commissioner for Human Rights, Michelle Bachelet, denounced the deplorable conditions that migrants and refugees are being subjected to while detained at detention centers along the US southern border. According to a UN report, the human rights chief stated that “As a pediatrician, but also as a mother and a former head of State, I am deeply shocked that children are forced to sleep on the floor in overcrowded facilities, without access to adequate health care or food, and with poor sanitation conditions.” 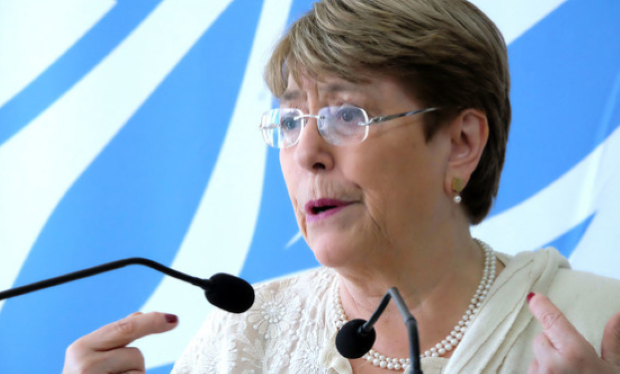 Bachelet stressed that these detention facilities are supposed to be utilized only as “a last resort.”  The human rights chief stated that if the detention centers had to be used then it should be for the “shortest period — with due process safeguards and under conditions that fully meet all relevant international human rights standards.” She emphasized the need for “noncustodial alternatives” that did not deprive “the liberty of adult migrants and refugees.”

As for migrants and refugees who are children, the High Commissioner admonished any form of detainment whatsoever. She explained that,“even for short periods under good conditions,” the detention of children “can have a serious impact on their health and development.” Furthermore, Bachelet stated that, “according to several UN human rights bodies, detaining migrant children may constitute cruel, inhuman or degrading treatment that is prohibited under international law.”

The High Commissioner’s condemnation of the US border detention facilities comes just days after the release of the report by the US Department of Homeland Security’s Office of Inspector General. The report called for “immediate attention and action” to the “dangerous overcrowding and prolonged detention of the children and adults in the Rio Grande Valley” detention centers.

Of these notorious detention centers, there is one in Clint, Texas, which The New York Times and The El Paso Times investigated to reveal just how horrific the conditions truly are. They conducted interviews with former Border Patrol agents and supervisors; lawyers, lawmakers and aides who had visited the facility. According to the agents, there were outbreaks of scabies, shingles, and chickenpox among the children confined in cells. There was even one girl who the agents thought might attempt suicide and they therefore had her sleep on a cot in order that they might keep an eye on her while they processed new arrivals. Some of the immigration lawyers reported that there were children as young as 5 months old being cared for by older children.

However, there is even worse. The UN Human Rights Commissioner had also to speak out about those who threaten to punish “individuals and civil society organizations that have been supporting the basic rights of migrants, such as to water, food, health and shelter.” Bachelet expressed that, “It is inconceivable that those who seek to provide such support would risk facing criminal charges.”

It’s possible that the human rights chief could be referring to the case of Arizona professor Scott Warren. According to The Guardian, the 35-year-old old is facing felony charges for allegedly harboring migrants, and faces up to five years in prison if convicted. Warren was caught by Border Patrol providing food and water to two migrants near the Cabeza Prieta. The young professor is a volunteer with a group called No More Deaths, who provide humanitarian aid to migrants who could be stranded – and quite possibly facing death – in the harsh conditions of the 56 miles of Sonoran Desert within the Cabeza Prieta wildlife refuge.

It seems that Michelle Bachelet is the highest official willing to acknowledge and speak out against the atrocities that continue to plague migrants and refugees. This past Monday, at the noon press briefing at the UN headquarters in NY, journalists inquired about the Secretary-General’s stance on the conditions of the detention facilities at the US border, especially in relation to Bachelet’s explicit statement condemning such conditions. However, the deputy spokesman for the Secretary-General, Farhan Haq, persisted in redirecting the journalists back to the statements of other UN officials, such as Bachelet. He reiterated that the Secretary-General supported the stance of the head officials of the other branches of the UN family, such as UNHCR and OHCHR. Once again, there is no clear definition of the Secretary-General’s position on another urgent matter that requires his backing.

Then there is US President Trump, who, not surprisingly, denies all reports of such conditions of the detention facilities at the US-Mexico border. According to CNN, when asked this past Sunday by reporters if he would visit the Clint detention center, Trump told reporters, “What we’re going to do is I’m going to start showing some of these detention centers … to the press.”

Although there have been rumors that Bachelet has proposed having detention centers closed, like the ones in Libya, it is still unclear if the living conditions of these migrants and refugees will be any better. It cannot be left to one individual to take responsibility for such a wide-scale situation, which continues to deteriorate while everyone else refuses to take a stand–or for that case, even acknowledge that such an issue exists. These migrants and refugees are victims of conditions outside their control, and the last thing they deserve is to face the same perils they tried to escape from. As the Human Rights Commissioner elaborates, “in most of these cases, the migrants and refugees have embarked on perilous journeys with their children in search of protection and dignity and away from violence and hunger. When they finally believe they have arrived in safety, they may find themselves separated from their loved ones and locked in undignified conditions, this should never happen anywhere.”