The installation was unveiled on September 8, 2019 and will run until September 10. Afterwards, the backpacks will be removed and sent to serve their true purpose – “to support children’s education.” According to the UNICEF chief, the backpacks traditionally symbolize “hope and childhood possibility.” However, for the duration of the installation, the backpacks are to draw “attention to the thousands of children killed in conflict zones and whose tragic loss will forever be felt in their homes, classrooms and communities around the world,” Ms. Fore stated.

On September 7, 2019, UNICEF volunteers and employees helped to install 3,758 school backpacks on the North Lawn at United Nations Headquarters in NYC. The backpacks were arranged in a disturbing semblance to headstones of a graveyard site. The sheer number of backpacks represents the breadth of children who have lost their lives to armed conflict in 2018. As UNICEF tweeted, “3,758 backpacks. 3,758 young lives lost to conflict.” Furthermore, the installation serves as a message to world leaders arriving at the UN for the annual General Assembly. According to UNICEF Executive Director Henrietta Fore, “In two weeks, world leaders gathering at #UNGA will mark the 30th anniversary of the Convention on the Rights of the Child. This installation should remind them of the stakes.” 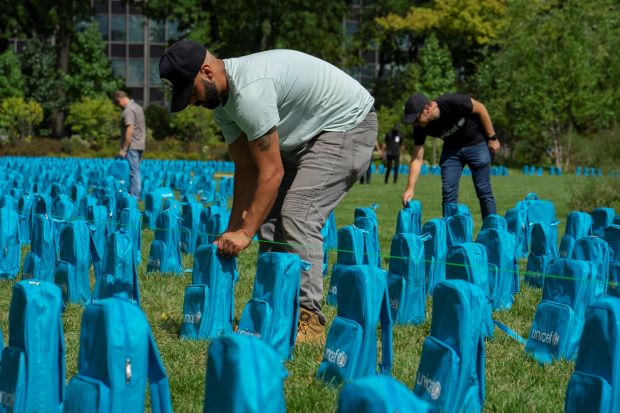 On 7 September 2019, UNICEF volunteers and staff prepare a UNICEF installation highlighting the disturbing scale of child deaths in conflict in 2018, on the North Lawn at the United Nations Headquarters.(Photo by: Christine Nesbitt)

The installation was unveiled on September 8, 2019 and will run until September 10. Afterwards, the backpacks will be removed and sent to serve their true purpose – “to support children’s education.” According to the UNICEF chief, the backpacks traditionally symbolize “hope and childhood possibility.” However, for the duration of the installation, the backpacks are to draw “attention to the thousands of children killed in conflict zones and whose tragic loss will forever be felt in their homes, classrooms and communities around the world,” Ms. Fore stated. 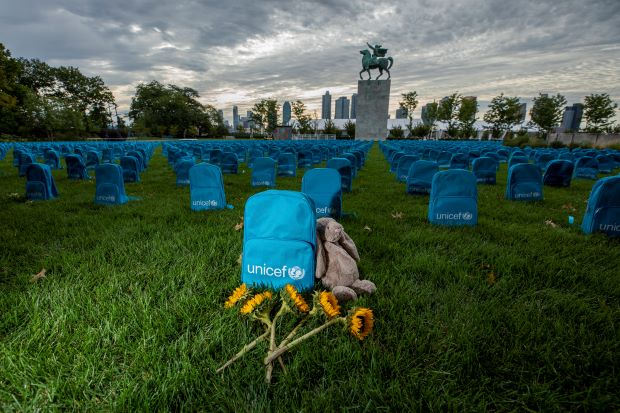 On 8 September 2019, a UNICEF installation highlighting the disturbing scale of child deaths in conflict during 2018 on the North Lawn at the United Nations Headquarters. (Photo by: Chris Farber/Getty Images)

According to UN News, the 2019 Annual Report of the Secretary-General on children and armed conflict revealed that over “12,000 children were killed or maimed in conflict zones last year– the highest number since the United Nations started monitoring and reporting this grave violation.” Furthermore, the Report found more than 24,000 serious violations  committed against children in 20 countries. These violations break international law and include “the recruitment and use of children, the killing and maiming of children, rape and other forms of sexual violence against children, attacks on schools and/or hospitals, and attacks or threats of attacks against protected personnel, and the abduction of children.”

The majority of all child deaths reported were a result of,  “continued, widespread use of explosive weapons such as airstrikes, landmines, mortars, improvised explosive devices, rocket attacks, cluster munitions, [and] artillery shelling.” According to the report, Afghanistan was found to have the highest number of child casualties with 3,062 reported, accounting for 28 per cent of all civilian casualties. The Syrian Arab Republic followed with 1,864 child causalities as a result of air strikes, barrel bombs, and cluster munitions. 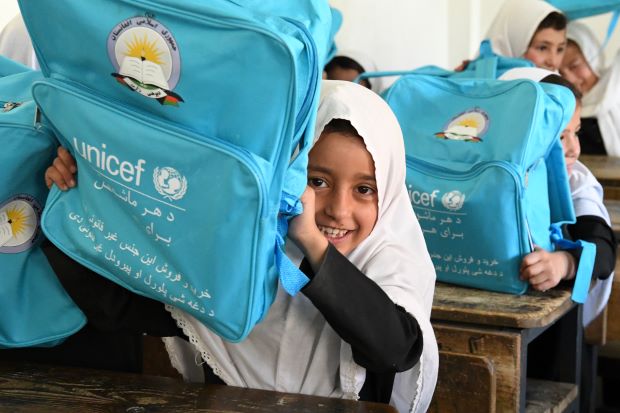 Children at the Bibi Amina Girls High School in Panjshir, a province in the North of Afghanistan, are excited with their new UNICEF school kits. (Photo by: UNICEF/ Frank Dejongh)

The Report found that in countries experiencing conflict, children are continuously being forced to partake in hostilities, including suicide bombings, or as sex slaves and human shields. According to the Report, Somalia had the highest number of cases of the recruitment and use of children (2,300) followed by Nigeria (1,947). However, the Report emphasized that, “Consent of the child is not a valid defense for the crime of recruiting and using children in war,” and that these children associated with terrorist or armed groups must be treated as victims. Nevertheless, this continues to not be the case in many countries. According to the Report, children associated with these terrorist groups are “deprived of their liberty, with limited or no parental care, access to food, medical and psycho-social support, and no access to legal or consular services.”

The Report also revealed 933 cases of sexual violence against children in 2018, with the highest numbers in Somalia (331) and the Democratic Republic of the Congo (277). Moreover, the Report found that the numbers do not accurately reflect the actual number of violations, especially those against boys, as many countries stigmatize boys for this kind of violation. 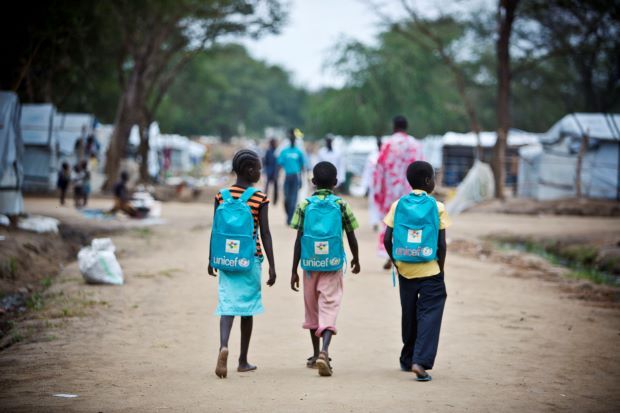 The children of Martha Nyacong, who attends an adult learning session in a UNICEF supported school in the POC, walk to school with UNICEF school bags in Bor, capital of Jonglei State in South Sudan Wednesday, Dec. 3, 2014. The UNICEF-supported school opens in the afternoons and the teachers volunteer to take adult literacy classes. (Photo by: Kate Holt)

Children in countries experiencing conflict are also prevented from having access to education and health services as schools and hospitals are constantly under attack. According to the Report, there was a total of 1,023 attacks in 2018, with the Syrian Arab Republic witnessing 225 attacks on school and medical facilities since the beginning of their conflict.

Even when the schools are not under attack, children still are at risk of being abducted simply for attending school, or going home, or venturing into any public space, for that matter. The Report reveals that a total of 2,493 children were abducted in 2018. Furthermore, according to the Report, these abductions are simply “precursor[s] to other grave violations, notably recruitment and use, and sexual abuse, including sexual slavery.” 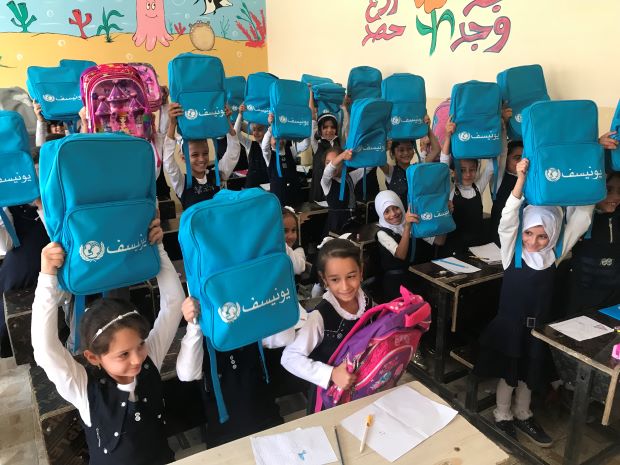 On 7 October 2018 in West Mosul, Iraq, students attend the UNICEF-supported Ithar School which runs a shift for boys and a shift for girls. Students have received UNICEF backpacks. During the last war, many children dropped out of school. Schools in Iraq opened on 1 September 2018. (Photo by: Anmar)

Therefore, the Report states that it’s a necessity that, “Member states have a central role in providing long-term and sustainable reintegration programmes, including providing predictable funding for such programmes.” Furthermore, the “Reintegration programmes must include mental health and psycho-social support, education and vocational training, as well as community-based interventions and access to a civil registry and to justice, taking into account the specific needs of girls and boys, including children with disabilities, so as to enable all children affected by armed conflict to return to their communities and regain their childhood.” To support the member states in this endeavor, the Global Coalition for the Reintegration of Former Child Soldiers was established and is co-led by the Special Representative of the Secretary-General for Children and Armed Conflict and the United Nations Children’s Fund (UNICEF). 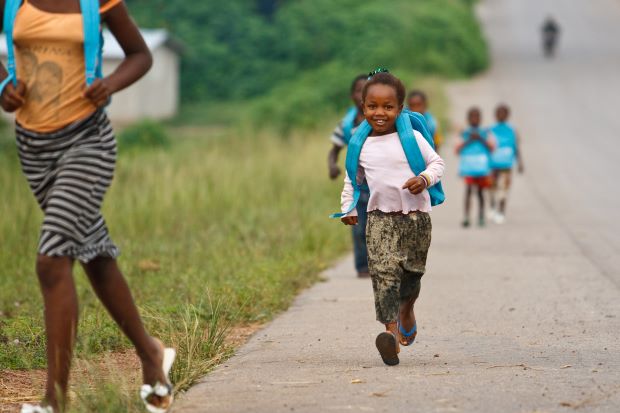 On 5 May, children arrive at the primary school in Bloleu Village in Dix-Huit Montagnes Region. They carry backpacks provided by UNICEF. The school has recently reopened, but only two of the six teachers have returned. (Photo by: Olivier Asselin)

However, as the saying goes, “Prevention is better than cure,” and as such, it is more important than ever to take the necessary steps to prevent any further violence against children in armed conflict to ensure sustainable peace. Achieving the “Youth 2030—The United Nations Strategy on Youth” in its entirety stands no chance if children are not able to live out their full potential and become agents of change.