In France if you don’t believe in Europeanist Catechism, you will irrevocably be called a “Eurosceptic”. Or worse: a “Europhobic”. But resuscitating even Hitler is a convenient way to avoid talking about the present. Could it possibly be a a protest vote? Mystère…

How could the French be so irreverent and bring absentee vote up to 60%, making the unacceptable racist Front National the first party in France? Shouldn’t they continue to trust the European Union and their corrupt, out-of-age disconnected political elite? Especially at a time when poverty grows so high, and when voters are asked to elect representatives at a European parliament that has absolutely no power, other than consultative (this is clearly written in the treaties and even on Wikipedia!). The elite is firmly determined to reeducate these these silly citizens.

French voters are misguided. And it seems they’ve been this unworthy way for a while now! Already, in 2002, the Front had won over the Socialists at the presidential election, offering Chirac an African score on the second turn of the election. And again, this time the French voted massively for a racist party that recalls us the darkest moments of our history… Can’t we hear the nazi’s boots marching over Paris already? Hitler, who died 60 years ago is alive again, in the mouth of the anchors of the mass media, he is becoming the #1 free People’s enemy again…

Seriously, does anyone need to read Orwell or Huxley to understand that an enemy, who died 60 years ago, and is fed to the lions by the elite is a felony and a scarecrow? Resuscitating Hitler is a convenient way to avoid talking about the present.

The magic of the Europeanist Catechism goes beyond. It is total, tautological, and totalitarian. If you don’t believe in it, or at least say you do, you will irrevocably be called a “Eurosceptic”. Or worse: a “Europhobic”, which is to say you currently are suffering a neurosis.

Never will the word “anti-European” be used in the mainstream media. It is too chocking. And against the nature itself of the European Union, that can’t help but grow in members and prerogatives. When a word doesn’t exist, the mere idea of it slowly disappears, even in the brightest open minds!

Despite of this long-term brain-washing enterprise, the French had the outrecuidance to vote in an “anti-European” way.

The debates, mainstream media anchors have been endlessly asking representatives of the traditional right and left how the hell voters could possibly be uneducated enough to vote for such an unacceptable formation. Consternation on all their faces. Unanimous indignation.

The media’s sadness and disappointment are explicable, beyond conviction: mainstream media, in France TV channels, print and radio outlet, each receive every year several million of euros from the State. Therefore, this is their fault too: they did not communicate enough nor efficiently to promote the Europeanist, electoralistic ideology. This is why mainstream media are so sorry. We have a moral obligation to feel compassionate: it must be scary for a government-million-subsidized media to realize how fast the anti-elite feeling is growing in France.

Newly-nominated AND highly-unpopular Prime Minister Manuel Valls, chose to take an energetic stance, while his party (in power!) only received 14% of the votes, among the 40% of the people who voted, which is to say that only around 3 million people out of the 65 million of French support the Socialists. But these numbers did not disturb him much nor make him think of resigning; instead he took a contrite and firm face and said he is “convinced the European Union can be reoriented after (despite?) this election”. We all remember in France that after 54% of us voted against the European Constitution in 2005, Sarkozy approved it in 2007. Voters in France are used not be listened to, especially on European issues. By the way, Valls also felt the need to clearly express that there will be no change in his program, just in case anyone silly was still hoping his vote was caring a message…

Marine Le Pen is not dangerous. She has no particular charisma. She doesn’t need anything like this at a time traditional political parties have lost their credibility to such an extent. 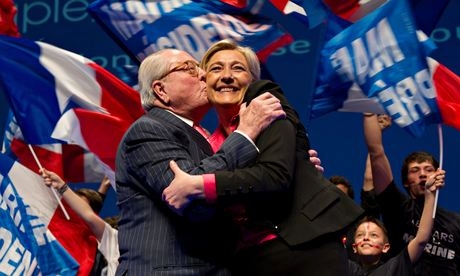 Her anti-Europeanist stance is a voter-magnet, for obvious reasons, starting with the fact a parisien sandwich, for example, used to be 12,5 francs, a coffee at a bar was 7 francs, today: the exact same products are now 4 euros and 1,5 euros : that’s to say exactly the double! The Transatlantic Trade and Investment Partnership also is regarded with a great defiance, Marine promised she'd do everything in her power for the EU not to sign it.

She won even though her father Jean-Marie declared on the most popular TV show in France, that “Ebola virus was going to solve the immigration problem in Europe”, only two days before the election. Senile or not, Jean-Marie Le Pen has always thought he had to express his sense of humor at every occasion. Maybe was he trying this time to undermine his daughter’s chances to win what he never won himself… it doesn’t matter at all. However scandalous remark he make, his daughter simplistic common sense will win over our political class felony. And she’s been cleaning her image. For years, Marine has been working on gradually removing all that used to make her party extreme, except its anti-Europeanism: no longer is the Front National against abortion, nor affirmative action and it has abandoned its anti-Semitic rhetoric. So, now, she is clean. As a result, the Front reaches its highest scores (40% in a poor district in Marseille) where the proportion of immigrants also reaches its hightest rank… So how can we call the Front racist?…

Even more decisive in her success : Marine Le Pen is not intending to “seduce” voters as she once declared, instead, she means to “convince them”. She speaks an energetic, sometimes simplistic rhetoric that is understandable to anyone. The way to go with the French before they behead their elites again.

No need then to be surprised at the French being fed up with electing representatives to be sent to a so-called “parliament” that doesn’t vote the laws. They don’t call it a democracy, in spite of what they are being told night and day. They are fed up with this supranational omnipotent institution. The Europeanist electoralistic catechism no longer works on them.

So what is it on the European flag? Happy-end stars? 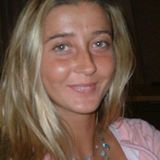 *Sophie de Bellemanière is an independent journalist. She studied Public Law at the University of Law of Aix-Marseille