In an emotional ceremony at the UN Headquarters, the United Nations Population Fund Award given to Father Aldo Marchesini, the missionary-doctor that in Mozambique gave his all to the victmis of poverty and violence: “You have the poor with you always. In contrast, these are open and clear to the poor and little ones. This is a statement from Jesus.” (Leggilo in italiano)

There are many abnormal connections in this life and on this planet. Some good; others not. One of the few good ‘abnormalities’ is Italian priest, Father Aldo Marchesini. Kidnapped, imprisoned and having been at the throes of death did not stop him from dedicating four decades of his life to saving and preserving the health and lives of women in under-developed countries around the world.

On 12 June, Father Marchesini was honored [1hr. 30 min. mark] by the United Nations Population Fund [UNFPA] for his extensive work and endowed with the 2014 Population Award at the United Nations. The award ceremony occurred just a few weeks after the UN’s International Day to End Obstetric Fistula on 23 May. But for Father Marchesini all of this was not just about achieving an award.

“Living with the poorest ones is an extraordinary experience. Little by little we come to understand another truth – the wise and intelligent ones cannot understand the world’s secrets. Few truths are more self-evident than this,” said Father Marchesini.

One of the many negative abnormalities is a medical condition called obstetric fistula – which does not have to happen. It is the disruption between a female’s inner organs, vessels, her intestine and/or another bodily structure. 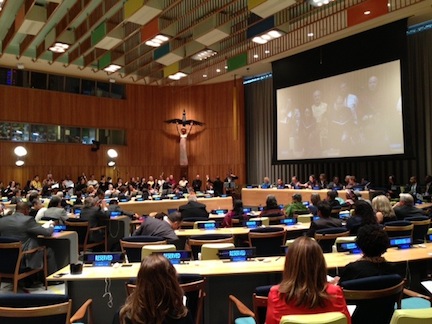 Fistulas are the repercussion of another abnormality causes this condition – one totally atrocious. Men, performing sexual intercourse on not-yet-developed bodies of under-aged and adolescent girls for their own pleasure, or anger, cause a total disorder in their bodies. Statistics show that unending poverty and the low status of women and girls allows for female trafficking, bartering or them being sold in order to achieve financial support for their families.  It’s a domino effect.

After enduring multiple forced intercourse by several males, the younger girls experience the tearing away of blood supply tissues in the vagina which connects to the bladder and/or rectum. Girls who had already reached puberty usually get pregnant, but since the pelvis was not fully mature child-bearing is totally obstructed. If there is prolonged wait time for pregnant girls to be attended to, a hole the birth canal develop getting wider with time, and leading to chronic lifelong incontinence. For all the girls, however, it leads to trauma and often death. Plus, it places shame, isolation and marginalization onto them.

“In the 70s, I treated many ladies. It was still quite common to see many of them reduced to miserable conditions due to mutilation of their bodies.  [Sadly] many of them young are young girls who leak urine day and night from their vagina. Most of the time they leak faeces too,” Father Marchesini recalled.

UNFPA estimates that between 2 and 3.5 million currently women live with obstetric fistula in the developing world. The organization adds that roughly 50,000 and 100,000 new cases develop each year and is most prevalent in the under-developed and developing nations in Africa, South East Asia and the Arab region.

According to the lead physician at a Goma hospital in the Congo region of Africa, “So many cases have been reported that the destruction of the vagina is considered a war injury and recorded by doctors as a crime of combat.”

Milan-born priest, Father Marchesini, became a doctor upon earning post graduate degrees in hygiene and scholastic and tropical medicine. He then moved to Uganda to specialize in surgery and spent two years, then moved on to Mozambique in 1974 where he worked in the most impoverished areas. After seeing the high rate of infant and maternal mortality rate, and having been the only medical doctor among the disadvantages, he started treating obstetric fistulas with the limited resources he had.

Doctor Marchesini said has personally operated on more than 1,000 women as a chief surgeon until he began he raised enough funds to train young doctors who he supervised as they took over treating the condition.  His dedication and reputation in the country gained him much respect throughout all of Africa as he travelled throughout and performed humanitarian and life-saving services.

“Especially to those who, in his or her life, have had the experience of living in the planet’s slums where the most common sentence is, ‘There is nothing’, we come to understand the true secrets of the world.”