“Free the journalists. Journalism is not a crime,” was the refrain bouncing off the walls inside a meeting room packed with UN correspondents, staffs members, as well as diplomats who attended an event held by the United Nations Correspondent Association [UNCA] at the UN headquarters.

It was the hope that the three Al Jazeera English journalists – Peter Greste, Mohamed Fahmy and Baher Mohamed – who have already spent six months in prison, would be freed during this week’s hearing.  But, the Egyptian judiciary wasn’t holding back in giving a harsh sentence this past Monday.

Mr. Greste and Mr. Fahmy were handed seven-year sentences, while producer Mr. Mohamed received a 10-year sentence. This roused a steam of anger amongst other journalists across the globe, calling for all correspondents to let their voices be heard.

President of UNCA, Pamela Falk correspondent for CBS, spoke out about the crisis saying, “We stand united in one voice against this. Journalists need to be protected. On a human rights basis, the UN can do this, so we call on all member states to do what is needed so that their voices can be heard.” 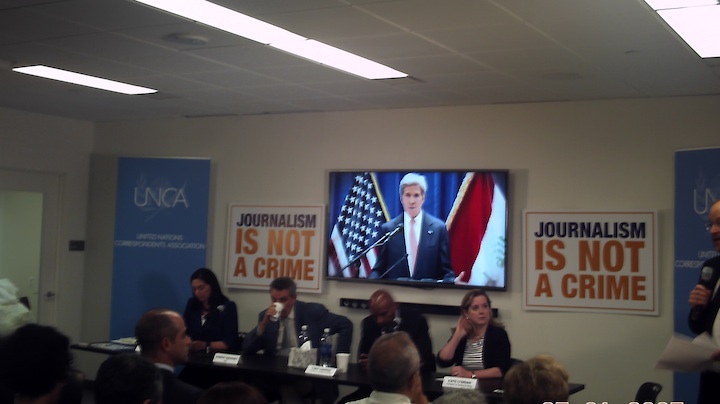 Although Egyptian authority figures mustered up courage and attended the UN event, the country’s Deputy Ambassdor Osama Abdelkhalek was ‘placed under the gun’ by heavy questions. Journalists simply wanted more information on the charges; sentencing; the ‘whats’, the ‘whys’ and the ‘whens.’

Mr. Abdelkhalek maintained his poise as he responded that he fully trusts the Egyptian legal system and that it is totally independent. He explained that there is a time frame for the appeals process and that it occurs in three stages.

“My perception is that this is only the first stage, however I cannot comment on the judicial system, nor can I intervene until all the stages are completed. However, I have collected all the concerns of the journalists who are present here today.” He went on to say that there are roughly 1,200 foreign journalists working in Egypt and none were harassed.

But Rob Mahoney, Deputy Director of the Committee to Protect Journalists [CPJ] wasn’t too keen on those words. His retort was that the situation in Egypt has been drastically deteriorating and is the largest “jailer of journalists in the entire world.”

“Since the regime, over 60 journalists have been jailed in Egypt, including these three. That’s even more than in Syria, so we ask the Egyptian government to please release them.” he added.

Al Jazeera America’s president, Kate O’Brian, added her own few words: “You know the saying ‘If you have nothing to say then change the topic?’ Well that’s what this [Mr. Abdelkhale’s comment] is, because so far over 200 journalists [around the world] have been imprisoned for telling the truth.”

While photographs of the three journalists were being shown on a screen in the room, the network’s CEO Ehab Al Shihabi, voiced his support. “Look at these men. These aren’t the faces of criminals,” he said. “The same people trying to bring about changes in the world are the ones put in jail. So the world is standing today to say that these men don’t deserve this.”

The purpose of the UNCA meeting at the UN was to keep Egypt under pressure, by way of the international community, in order to speed up the process of appeal. And at the solemn ending of the event, Mr. Mahoney pointed to three empty chairs and said, “Symbolically, we are holding three seats here at the front of the room to signify the places where these men should be.”