In preparation for the Paris Conference on Climate Change, at the United Nations Headquarters, the Secretary General Ban Ki-moon and actor Robert Redford warn world Leaders that climate change has real consequences on people’s lives and is a threat to peace, while disrupting national economies. Affordable, scalable solutions are available to keep global warming below 35.6°F / 2°C / Leggi un altro articolo in italiano

The twenty-first session of the Conference of the Parties (COP) of the UN Framework Convention on Climate Change (UNFCCC), scheduled to be held in Paris this coming December, got a kick start monday by way of a High-Level Event on Climate Change at the United Nations Headquarters in New York. Secretary-General Ban Ki-moon who attended the session, opened the floor declaring that, “The main purpose of this gathering today I hope will really answer the expectations of the international community because a climate change agreement in Paris will not be the end point. It must be a turning point in how the world collectively responds to the defining challenge of our time. “Our journey towards bold climate action is at a critical moment and the negotiation pace is so slow, far too slow. It is moving at a snail’s pace".

The event, organized by the UN General Assembly President Sam Kutesa, was held to support the process that will ultimately result in an agreement intended to succeed to the landmark Kyoto Protocol on reducing greenhouse gas emissions. Kutesa stated that the adoption of a transformative post-2015 development agenda in September; achieving a successful outcome from the upcoming Third International Conference on Financing for Development; and concluding a global climate change agreement will be monumental milestones towards improving the livelihoods of people around the world. 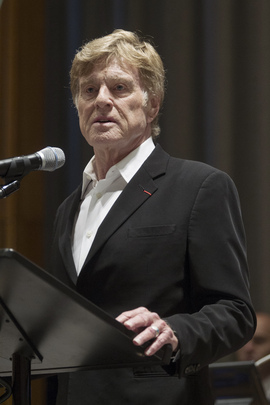 Joining the delegates of Member States at the event was long-time conservationist and Academy Award-winning actor, Robert Redford who declared, "We are all responsible for this crisis so this may be our last chance. This is our only planet, our only life source.” During his speech, Redford highlighted the fact that the mission of the UN's 193 member nations is simple, but daunting. Therefore he urged world leaders to assume a leading role and adopt the climate agreement in Paris later this year in order to keep global warming from rising to dangerous levels. He said, "I come not as an actor but as an environmental advocate and concerned citizen to urge the world's nations to take action now on climate change, because look, this is it. The time for half measures and climate denial is over. Save the world before it's too late."

However, representatives for the BASIC (Brazil, South Africa India and China) countries expressed deep disappointment at rich countries that have wavered from their promise six years ago to provide the $100 billion needed to help developing countries. “Without the flow of support it will be impossible to move onto any such trajectory in the near future,” said Ravi Prasad, India’s climate change negotiator, who added that developing countries need help to cut their greenhouse gas emissions in order to prepare for sea-level rises, extreme weather and other consequences of climate change. “This is a crucial element. It is jeopardizing the prospects of reaching a global warming deal.

Ban, then applauded recent achievements toward helping the environment by mentioning that China, the European Union and the United States – the world's three biggest economies – have “placed their bets” on low-carbon, climate-resilient growth. He also highlighted the fact that the world’s two largest emitters of greenhouse gases announced ambitious climate actions, while other major economies in the G7 and G20 have also made voiced clear intentions to act. “Let us always remember that climate change and sustainable development are two sides of the same coin, with two mutually reinforcing agendas. Development cannot be sustainable if it does not address the challenge of climate change,” the Secretary-General added.

With only ten negotiating days remaining before Paris, inter-religious based groups marched through the streets of Rome this past weekend and waited outside Vatican to voice their concerns about climate change. "Many Faiths: One Planet" and "The Earth: Our Common Home – Climate Action Now!" were the words written on many banners. Placards promoting renewable energy and sustainable development and kites also filled the skies in lobbying for leaders to take decisive action at this year’s summit to discuss the effects of global warming which will be held in Paris. From Catholics to Protestants; Buddhists to Hindus; Jews to Muslims, and also other sects, gathered in demanding quick action and they also thanked Pope Francis for having sent a papal letter to all bishops of the Roman Catholic Church regarding the deplorable environmental issues. The letter is meant to urge world leaders to hear the cry of the earth and the cry of the poor. As the Pope spoke to the crowd, he praised and acknowledged continued inter-religious collaboration. “This makes for an integral ecology to protect our common home,” he said.

At Monday's conference, Ban honored the Pope’s efforts by mentioning the discussions they have had regarding his invaluable efforts on climate change. “His Holiness Pope Francis has given such very valuable moral and spiritual strength to our continuing efforts [showing that] 2015 is a year for global action.” Ban then implored world leaders to accelerate their efforts and then laid out recommendations, echoed by Kutesa who added, “These will surely make substantive progress.”  Ban expressed strong belief that a meaningful agreement must:

Ban also congratulated countries that have submitted their Intended Nationally Determined Contributions (INDCs) as they “provide a floor, not a ceiling, for ambition and are critical for building momentum and trust,” he said. As the Secretary-General urged others countries to follow suit as soon as possible, he warned that it is already clear that current INDCs will not be sufficient to place the world on a less-than-2-degree pathway because many small island developing states (SIDS countries) and communities in the Pacific and Indian Oceans face an uncertain future as sea-level rise threatens their territorial integrity.

“Now is when true leadership is needed from the highest levels,” Ban concluded. “Heads of State and Government must give clear guidance to their ministers and negotiators so that they take personal responsibility for the outcome. I really count on leaders, Presidents, Prime Ministers and Ministers to exercise their political direction so that this negotiation will move much faster.”