The devastating Ebola crisis in West Africa continues to wreak havoc in the three most disease-ridden countries where 30 new cases were confirmed. At a high-level International Ebola Recovery Conference at UN Headquarters the international community explored country-based and regional anti-Ebola strategies and pledged more than 5 billion dollars to support the recovery effort. Italy has allocated additional resources in 2015 for a total amount of 24 million Euros

The Republic of Guinea was the first to report cases of Ebola in December 2013. The disease quickly spread to neighboring Liberia and Sierra Leone, and has been an ongoing issue throughout those three countries since then, despite small amounts of decreased transmissions in each country. But what started as just a public health crisis rapidly degenerated into development crises in less than six months.

Liberia was one of the worst affected countries in the outbreak, but began to see a decline soon after. In March, Liberia’s last case had been released from treatment and all contacts had finished their monitoring period. On May 9 this year, the country was declared free of Ebola transmission since there had been no new cases for 42 days after the death of the last confirmed victim.

Sierra Leone’s first Ebola case was reported in May 2014 and reports were that there was a steady decline in transmissions between December of the same year and early 2015.  However, Sierra Leone is still fighting a somewhat losing battle in not gaining full control. More districts have reported newly-confirmed cases and most were not in registered contact areas.

In Guinea, there has been a significant amount of community resistance in some areas, interfering with measures to control further spread, and resulting many new cases which are of an unknown transmission source of contacts, many people are dying in communities in non-healthcare settings and are being masked by unsafe burials. In the week ending June 7, at least 16 cases were reported and another 13 the previous week, while the transmission rate increased in five districts. 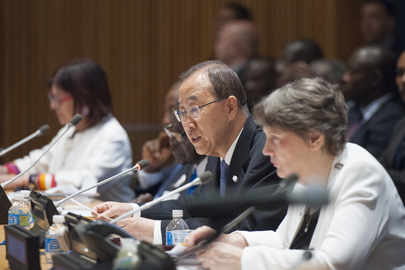 On July 10, secretary-general Ban Ki-moon hosted a one-day high-level International Ebola Recovery Conference was held at UN Headquarters in New York with the aim of ensuring that recovery efforts go beyond redressing direct development losses to build back better and ensure greater resilience. Another aim is to open the discussion floor and explore detailed country-based and regional anti-Ebola strategies, and provide a platform to secure pledges of international support that can complement African Union-led efforts and help fill technical and resource gaps. “I think we can overcome this one, and I think we are now overcoming it but we have to go until the end, until we see the last patient cured and there will be no further cases,” Ban said, adding that The General Assembly took decisive action, endorsing the UN Mission for Ebola Emergency Response (UNMEER).

The World Health Organization (WHO), also at the event, said that the origin of this new cluster of Ebola cases is not yet well understood, but significant challenges remain in the fight to eradicate the disease. WHO also said that improvements to case investigation and contact tracing, along with enhanced incentives to encourage reporting and compliance with quarantine measures have led to a better understanding of chains of transmission however, “The residual lack of trust in the response means that some cases still evade detection for too long, increasing the risk of further transmission.” The organization’s most recent weekly update was being presented during the event and showed that the fatality rate for those affected is just under 50% and has the strongest impact on women and children, with a 50.8% death rate for females.  Numbers showed that as of January 2015, 2,775 cases had been reported in Guinea; 8,157 in Liberia; and 9,789 in Sierra Leone.

Ambassador Samantha Power, U.S. Permanent Representative to the United Nations, also present at the International Ebola Recovery Conference  remarked that the same time as we work to end this outbreak, we must also lay the foundations to prevent the next one. One of the most painful lessons of this outbreak – one learned at the immeasurable cost of more than 11,200 lives – is that Ebola thrives in places with fragile and under-resourced public health systems, and in particular on the poorest people who live in these places. Another lesson is that such vulnerabilities not only pose a risk to the communities where outbreaks begin, but to all of our communities – from Dallas to Dakar. “The United States will continue to do its part to address both immediate and long-term needs, as we did when president Obama deployed more than 3,000 U.S. civilian and military personnel to aid in the emergency response,” Power said.

Télimélé, a small town in the highlands of the Republic of Guinea, is located roughly 168 miles north of the country’s capital, Conakry and relatively far away from the country’s Ebola epicenter in the south-eastern forest region. Dr. Maurice Ony Beuvogui, director of the 44-bed district hospital was alarmed when results came in from Conakry that Ebola had reached his town. “We were [all] scared,” he said. Since the hospital was one of only few in Guinea that had received a high certification for infection prevention and control, Beavogui said he believed his team was ready to meet the challenge because “We knew that our health workers have the responsibility to fight it.” And they did. Since October 2014, there has been no new cases of Ebola in Télimélé and as of June 16 this year, no active transmissions have been reported in Télimélé and up to 19 other small villages in Guinea, yet Ebola is still rampantly active in Guinean cities such as Boke, Conakry, Dubreka, Forecariah,  Fria and Kindia.  So how did the 300, 000-population town manage to kick that off such a feat? Community response is the answer. 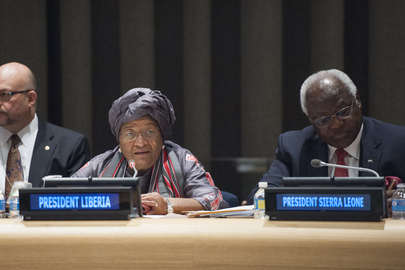 The medical team, called Medécins Sans Frontières, quickly responded to news of the outbreak – transforming one wing in the local hospital into an isolation area while building a treatment center nearby. The treatment center opened within days and invited the WHO to send Ebola experts, to which a positive response was received, giving technical support for overall coordination, surveillance and data collection. District authorities immediately gathered up a crisis committee involving leaders of all aspects of life in Télimélé and putting shoulder to the wheel, they came up with one sharp message:  ‘Come early for treatment – you survive; you come late – you die.’ “We wanted people to trust our interventions,” Beavogui said.  As the outbreak progressed across the country, the national preparedness plan was activated and the district hospital staff attended training sessions on infection prevention and received Ebola protective equipment. They hoped it would not be needed. Télimélé has been Ebola-free since the end of July.

Fabio Cassese, Deputy Director General for Development Cooperation, Ministry of Foreign Affairs and International Cooperation, and speaking on behalf of the Italian EU Presidencyat the International Ebola Recovery Conference reminded Member States of Italy’s participation in a huge collective effort which brought the virus under control, with a significant decline in the number of new cases. Cassese said that from Italian side, “we have decided therefore to allocate additional resources in 2015 for a total amount of 24 million Euros. Out of this amount, 4 million Euros will be immediately disbursed for emergency activities coherent with the National Recovery Plan prepared by the Ministry of Health of the Government of Sierra Leone, to build the capacity of the national health system, to prevent the diffusion of the virus and to assist local population.”

He added that an additional amount of 10 million Euros have already been envisaged as a soft loan in favor of Guinea Conakry and is being submitted to the Guinean authorities through diplomatic channels with the suggestion to employ the mentioned amount for the rehabilitation of the health system in the wake of the Ebola outbreak.

“Today’s top priority, is in fact to concentrate on the support for the rehabilitation of the health systems (not only in the capitals but also in remote areas) and to boost research and development by the pharmaceutical industry with the aim of individuating a vaccine in the next few months. “However, the epidemic is not over and we have not yet reached our common goal of “getting to zero and staying at zero.” Cassese said.

A Specter with a Scepter 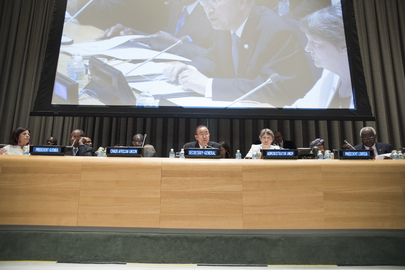 However, the organization is under the microscope regarding actions taken at the original outbreak. A panel of experts tasked to look into the agency's response to last year’s outbreak said WHO needs to re-establish its pre-eminence as the guardian of global public health. The panel recommended that the WHO should make significant changes throughout, with strong political and financial support from Member States. “The Panel firmly believes that this is a defining moment not only for WHO and the global health emergency response but also for the governance of the entire global health system,” according to a written report of the Ebola Interim Assessment Panel which was released today. “The challenges raised in this report are critical to the delivery of the proposed Sustainable Development Goals, especially Goal 3: Ensure healthy lives and promote well-being for all age,” it stated.

The report was welcomed by WHO as it outlined its initial efforts towards implementation of recommendations that examined the International Health Regulations; its health emergency response capacity; and its role and cooperation with the wider health and humanitarian systems. However, the WHO also has a newly added task which is to now take over the duties of the UN Mission for Ebola Emergency Response (UNMEER) which was established in September 2014 as a temporary measure to meet immediate needs related to the unprecedented fight against Ebola. As the organization closes next month, the UN will maintain high-level leadership under WHO and “work alongside the UN country teams in its support to help the affected countries get to zero. The strategy to end the outbreak is working – but the final stretch of the response remains,” the secretary-general said.

“All of these disruptions have had a negative impact on the economies of all three countries – which were, prior to the Ebola outbreak, on a positive growth trajectory. The response is being fine-tuned to focus on increasing engagement, awareness and contact tracing in the remaining affected communities. It has disrupted health and social services, growth rates are stifled and the poverty situation is being aggravated while livelihoods are being destroyed,” said Ban who also stated that new cases show the need for continued vigilance given the regional risks. “Proactive actions underscore how response strategies have effectively reinforced national capacities and knowledge to be activated for future outbreaks.  The impacts of the Ebola crisis have been far-reaching and much work is needed to support the countries. Yet we cannot breathe a sigh of relief – instead, let us collectively take a deep breath and resolve to finish the job.” 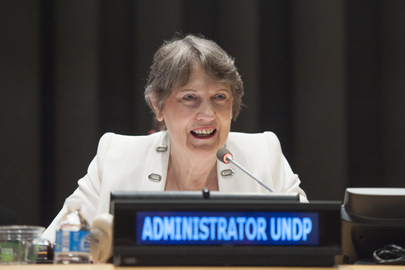 Friday's conference at the UN opened up to hopes of a fast recovery: The international community has pledged more than 5 billion dollars to support Guinea, Liberia and Sierra Leone in their efforts to recover from the devastating effects of Ebola.

Helen Clark, United Nations Development Programme (UNDP) administrator, who chaired the conference, said: “We have seen a very encouraging response today. The preliminary figure for funds announced today amount to $3.4 billion, taking the total resources pledged for the recovery of the Ebola-affected countries to around five billion dollars. The whole spirit of optimism around the conference and the willingness of partners to see this as a long-term endeavor is hugely encouraging.”