When in Yemen an MSF hospital was stuck by bombs early this week, the United Nations was quick to point fingers at the Saudi coalition. The Saudi Ambassador Abdallah al-Mouallimi criticized Ban Ki-Moon of issuing a statement before an investigation was done, but the Secretary-General's spokesperson confirmed that the accusations were backed by good sources in the country

“Yemen is ablaze and the population is in a catastrophic situation. The country is bleeding and its cities collapsing. Citizens are deprived of the most basic rights and trapped amidst political dispute and war without restraint,” Special Envoy for Yemen, Ismail Ould Cheikh Ahmed told the United Nations Security Council on October 23.

The first bomb exploded the empty operations room of the hospital. The second one exploded in the maternity ward. The next five-to-six blasts totally devastated the Sa’dah city hospital during the late hours of Monday October 26. Luckily, staff was busy tending to patients in the emergency room so they had time to flee the building with only several people being injured. However, that catastrophe set off another series of chaos regarding Saudi intervention in the Yemeni contention since March this year.

Sa’dah, located in the north-western section of Yemen near the border of Saudi Arabia, is controlled by Iran-backed Houthi forces. When Yemen's civil war hit cataclysmic highs earlier this year, after the Houthis caused a collapse of the country’s governmental system, the Saudi government decided to meddle – launching a military campaign against the Houthi rebels.

Therefore the entire region has been under intense airstrikes for months as nearby fields are used as targets during training.

The Saudi effort was to hinder Houthi advancement and restore the government but, to the demise of the Yemen civilians, the intense airstrikes has worsened the situation. The death toll has catapulted way high, there is hardly any accessibility to millions of civilians in need of humanitarian response, and according to the latest report from The United Nations Refugee Agency (UNHCR) roughly 70,000 people have fled to the neighboring countries of Somalia, Djibouti, Sudan and Ethiopia.

The hospital, run by the medical aid group Doctors Without Borders (but better known in its French name Medecins Sans Frontieres or MSF – with support from UNICEF and the World Health Organization) had also suffered damage from previous coalition attacks. Despite MSF’s multiple alerts to the Saudi-led coalition that the airstrikes were destroying both the hospital and civilian properties, complaints were treated as bane. Since, to MSF, there was no doubt who the responsible parties were, blame was immediately pushed into the hands of the Saudi coalition.

As the news hit the United Nations, Secretary-General Ban Ki-Moon called for a prompt, effective and impartial investigation in order to ensure accountability. Tuesday morning, Ban released a statement condemning the Saudi-led airstrikes saying, “Hospitals and medical personnel are explicitly protected under international humanitarian law. I remind all parties of the utmost necessity to respect their obligations to prevent attacks against civilians and civilian objects.” However, a written statement from The Saudi mission to the United Nations said that the strike was probably a mistake because its coalition aircrafts did not attack the hospital.

While all the ruffling about whether the Saudis would accept responsibility and apologize for the attack was underway on Tuesday, a policy forum event was also taking place at the International Peace Institute – directly across from the New York UN Headquarters – to discuss the challenges for providing humanitarian assistance in conflict areas with Yemen being the main focus.

Saudi Arabia was lauded for its generous contributions to the 21 million Yemenis in need of humanitarian response and being the biggest financial and medical donors. Mention was made of all the repatriation programs and non-governmental organizations (NGOs) involved, including King Salman of the Kingdom of Saudi Arabia’s flash appeal program which has helped more than five million Yemenis.

When questioned by members of the audience as to whether Yemen has qualms regarding accepting money from Saudi Arabia knowing that its intervention has caused surplus tension in the country, panel member Rabih Torbay, Senior Vice President of International Operations of the NGO, International Medical Corp responded, “More important than who gives the money is what we do with the money.” 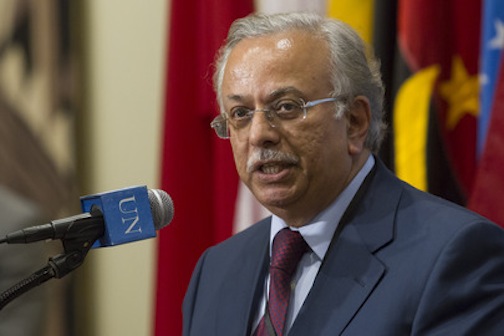 Those series of events sparked a sharp retort on Wednesday from Saudi Arabia ambassador to the UN, Abdallah al-Mouallimi. His defense was that that, “The UN has no right to blame the attack on the Saudis and their allies before the incident had been properly investigated.”

Ban Ki-moon's spokeperson, Stephane Dujarric, when questioned during the daily press briefing on Saudi Ambassador's denial, said that the UN was confirming their previous day's statement because they have sources in the field that confirmed facts that the Saudi coalition did indeed carry out the attack.

MSF's emergency coordinator in Yemen, Laurent Sury, then commented that "Saudi authorities are denying the evident truth of having destroyed a hospital. This is an alarming sign for the Yemeni people and for those trying to assist them. How are we to draw lessons from what happened when all we face are denials?"

Permanent Representative of Yemen to the UN, Khaled Hussein Mohamed Alyemany, took the floor at the panel discussion, saying that the situation in remote areas is controlled by rebels [and not by the Saudis]. He added that supplies are indeed coming into Yemen but gas lords steal them then blame the government for forfeiting relief efforts. “The war is 70% over, and we are starting to create hope so that people can return to their regular lives,” he said.

Alyemany was later questioned by La VOCE regarding the future of refugees leaving Yemen and he responded: “Yemeni are strange people. They are not leaving Yemen in a situation like this. In fact, our people are coming home.”